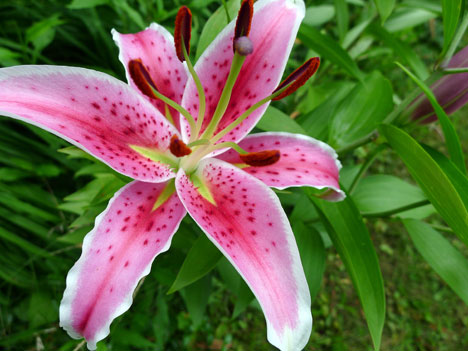 i feel sheepish about how many days have gone by since i blogged, but i’m hoping that if i bring lots of flowers it will make up for that. 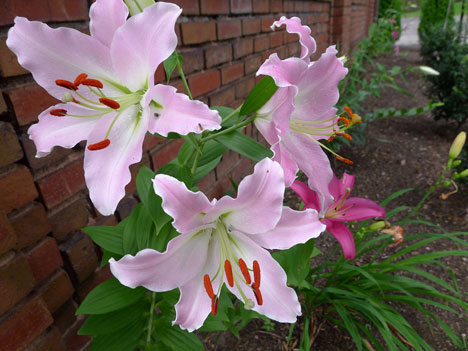 our lilies are blooming rather late this year (they usually start in june, around father’s day, but we didn’t see nary a one until after the fourth of july this year). 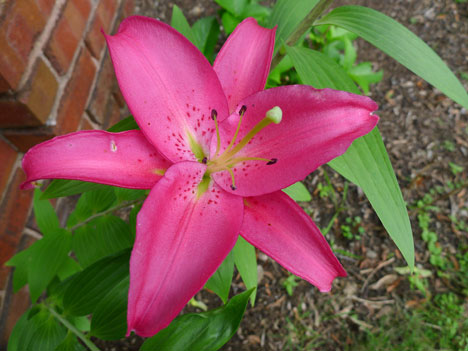 the pinks are dominant this week, though there are vivid orange day lilies, too. these were a gift, thinned from the beds of our neighbor the doctor, whose office is across our back street. 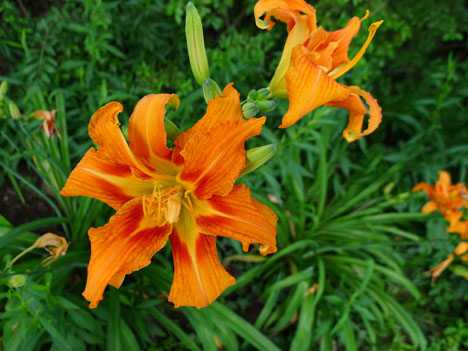 there is a row of them all along one side of our yard. we’ve had them for at least five years now and this is the first time we’ve had a whole row of blooms; i think they’ve finally matured. i LOVE this orange; wouldn’t this be a great color for socks or fingerless mitts? i think i even have yarn this color!

and yes, it really is that green in canton—we had sixteen days of rain before this weekend, which explains why. why, we are on the fourth day in a row of nice (though very humid) weather and i almost don’t know how to feel about that. 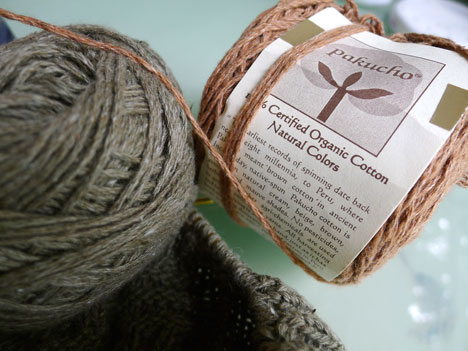 i’ve been busy busy this last week, mostly with secret projects, but i am continuing to take a few minutes each morning for a little knitting over coffee. it’s been really nice to sit out in the porch/kitchen/living area while the coffee perks, listening to the birds and putting a few rows on. i might have to keep this up once the renovation is done. 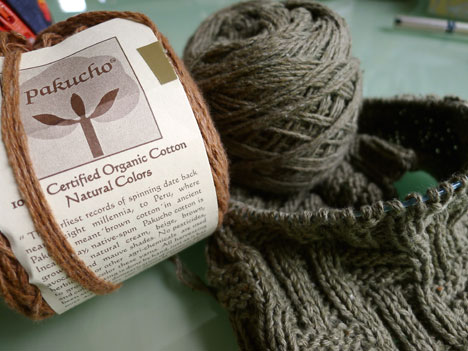 i finished my slouch potato hat (i’ll show you that in a sec), but missed having that project in my hands so i started another, this time in comfortable ecobutterfly color grown organic qoperfina cotton sport.

it’s the coolest yarn; not only is the fiber is grown in an array of colors—the hat is in deep green; above we also see deep cinnamon brown—but a tiny percentage of microscopic copper fibers are spun into the singles to help soothe and promote healing. it’s a wonderful yarn to use for babies or people who need extra TLC. 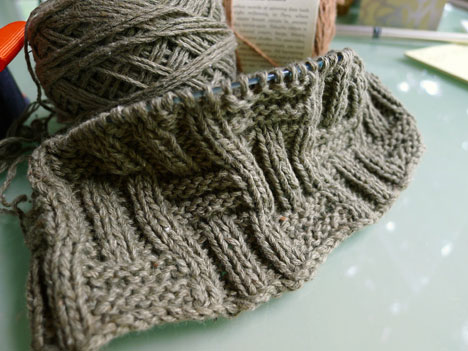 mmmm luscious. this is a gift for someone who will soon need a very soft cap, and since it’s already in a different gauge on bigger needles i’m venturing completely away from the pattern of the previous hat to make it as a simple cap (no buttoned brim), while keeping the same idea.

i think i might have to make one for me and one for david; it’s too yummy to pass up.

so yeah, i finally got my multi-colored slouch potato blocked last tuesday 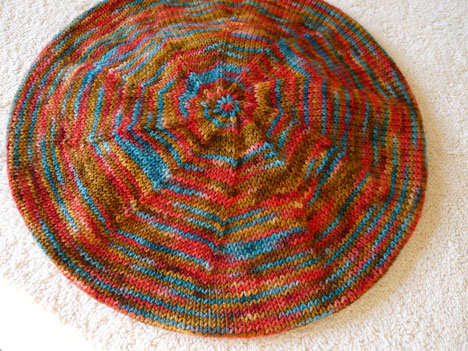 now didn’t that yarn smooth out nicely? this is indigodragonfly merino/nylon sock in colorway as god is my witness i thought turkeys could fly! (if you want some email kim and she will make you some). it did not bleed or grow or become shapeless when wet; it was very easy to wash and then bring back better than new.

anyway, once it was dry i had mister blockhead model it for us 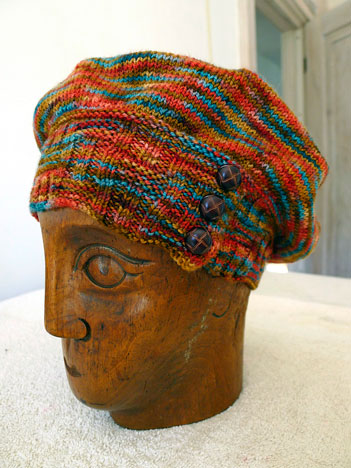 as you can see, i took everyone’s advice and went with the brown buttons, haha.
(i do take each and every contribution seriously, i do. but sometimes my evil twin intervenes and does exactly what she wants anyway—there’s nothing for it when she’s like that!) 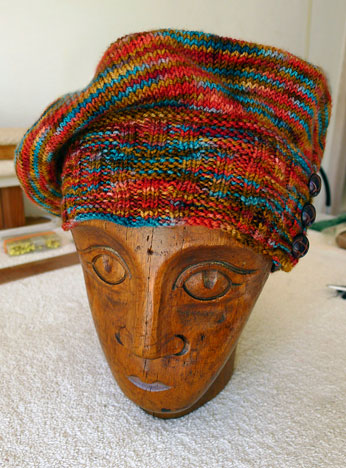 we’ll get some nice photos on a real person soon, maybe even this afternoon, who knows. with everything going on around here, anything could happen. i still have to write up the pattern though, so it will be a short time before you see that. 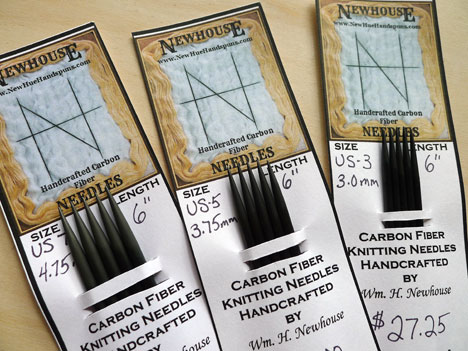 knitting the hats provided me with the perfect project to try out these new needles from newhouse needles—a spin-off company (no pun intended) from newHue handspuns, one of my favorite yarnies.

a few months back, cheryl sent me these carbon fiber needles that her husband is now making. i wanted to play with them for a bit before talking about them; i had never knit with carbon fiber needles before. having several projects in the last few weeks that required using DPNs at some point, i had plenty of opportunity to put them to work with a variety of yarn types.

the carbon fiber surface takes a little getting used to

and the tips—wow! i was almost a little scairt of those points. 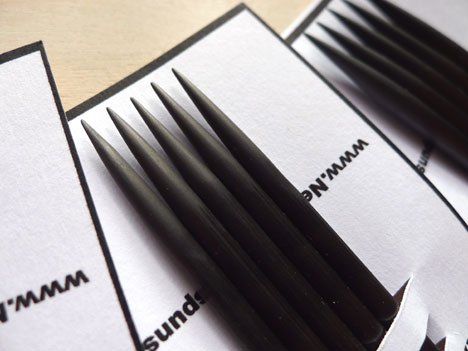 and truthfully, in the smaller sizes they are pretty pointy—if you like a nice sharp tip  for knitting fine lace yarn or grabbing stiff little sock stitches, these are your tools. but in the bigger sizes, i can appreciate them even more. many needle brands that i love have much more rounded tips once the sizes go past 3.5 mm or so. not these—they stay nice and pointy through the larger range. and now, the moment i’ve been waiting for has arrived—newhouse is now making circulars!! i am totally buying some right now.

while i was blocking my slouch potato cap, i decided to go ahead and block the first jazz strings sock as well, beasue the pattern is ready and the test knitters are nearly done; it’s almost time for the release. if we’re going to take photos sometime soon, i want the sock to look its best. 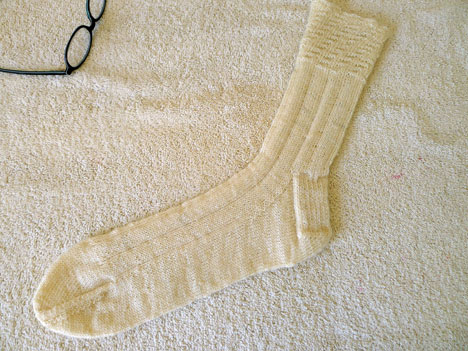 this fabric changes so dramatically when it’s had a good soak and a wash. residual spinning oil on the fiber makes it a little dull, but keeps the surface smooth for easy knitting. gower, once the stitches are all in place, it’s very nice to get that oil washed out so the fiber can bloom and sparkle 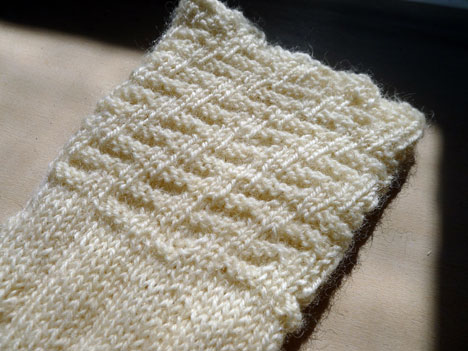 see what i mean? all aglow. and the fabric in the leg smoothed out so beautifully too; if you ahve any doubts about this yarn while its on the needles, you’ll be rewarded when you wash it. 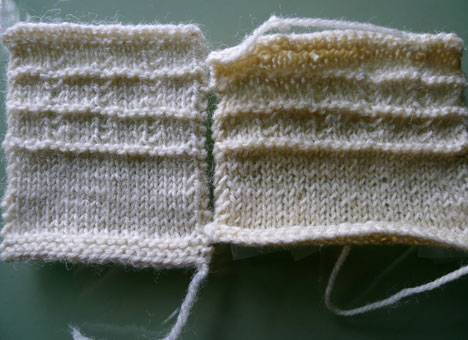 left is the washed swatch and right is the unwashed. this will happen in your project fabric too, yay.

so socks are on the way; as soon as this month’s club chapter is done (later today) i can get moving again on non-club design work (release sock pattern, write hat pattern, get back to work on sea pearl sweater).

like i said earlier, we’ve had FOUR days in a row of nice weather and on saturday i ran in another race, this time one that was right in my neighborhood 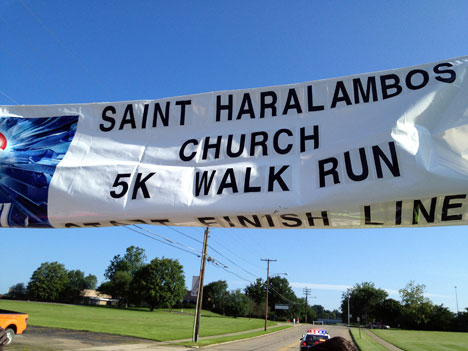 oh my, i never had so much fun at a racing event! first we all gathered at the start so we could get going a little later than the 9:00 start time. no matter, this was a fun run and everyone was happy to be there. we even had a prayer to get going on.

i enjoyed this race; it was run entirely on neighborhood streets, ones that i’ve walked on frequently though i don’t usually choose to run them (we have brick-lined streets in my neighborhood, not great for running).

despite the brick, i ran very well and finished 3.36 miles in 26:35. i couldn’t believe it when i heard my time was 16 minutes at the two-mile mark. i ws having fun! 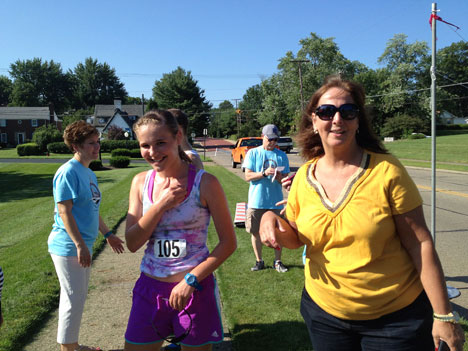 this is the womens’s winner on the left; at the finish she was cheering me on and clapping; i was so tickled by that, haha. actually, there were a LOT of really nice young people at this event and i enjoyed spending time among them.

the race was part of the church’s 100th anniversary celebration. st. haralambos church has quite a history in our little city; it used to be downtown, but in the 1950s they moved the church in two pieces about 40 blocks north to our neighborhood and enlarged it to accommodate a growing congregation. it took 18 days to to move just the first half.

i had never visited the church before this race event, so it was a nice introduction for me. everyone was so pleasant and friendly; after the race was run we gathered in the gym for snacks, awards, and door prizes. 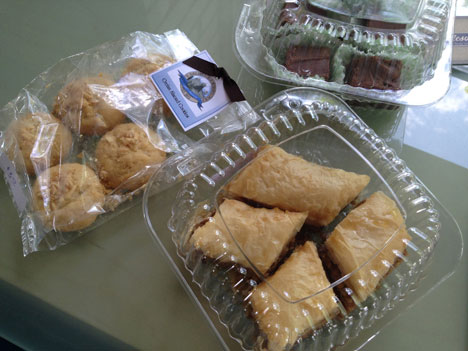 AND a bake sale from which i took home several treats. i remembered to bring my “baklava card” which was included in my race packet to redeem for my free piece of home made baklava. seriously, who would leave that home?? and so worth remembering . . . the treat was one of the best i’ve ever eaten.

while we waited for the race results, we were treated again, this time by the church’s group of greek dancers 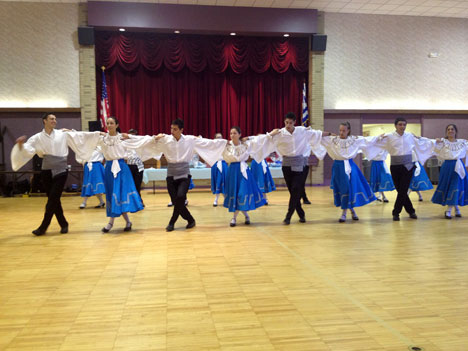 remember those teenage runners i mentioned earlier? well several of them, along with a number of other younger church members perform with the group. 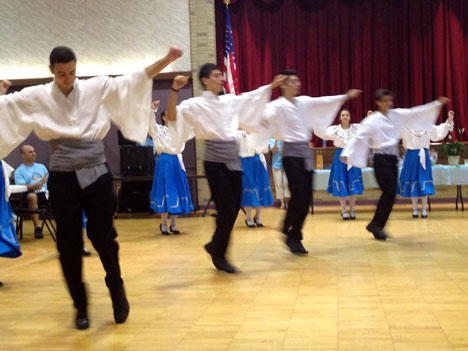 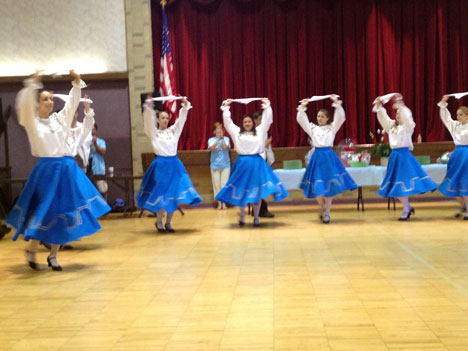 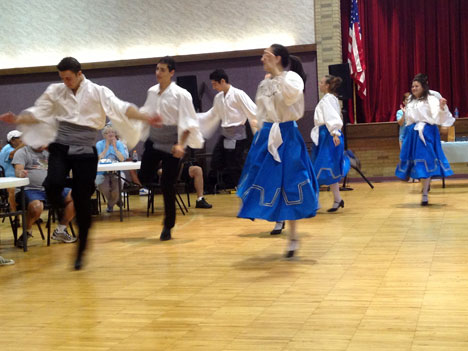 i really REALLY enjoyed this half hour of the day; not your usual race event at all.

i thought it was cute when, about a half hour later, i sw a couple of them heading for the food table in street clothes 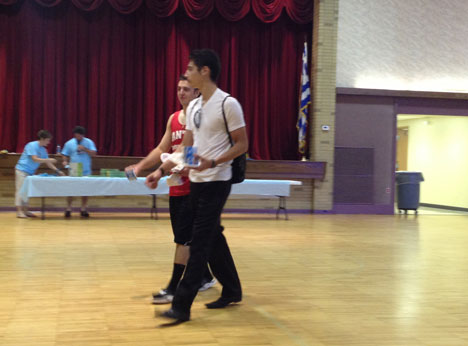 and once we were all happy from the dancing and sweetened up form the desserts, the prizes were announced. 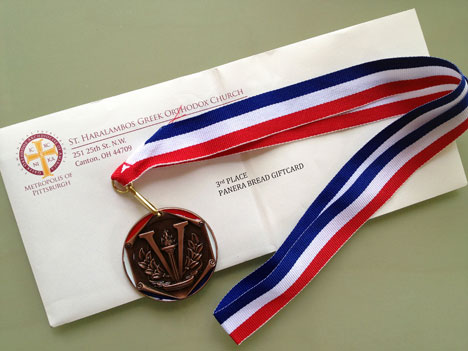 i was surprised to hear i came in third for the women (no age groups in this one). to be completely fair and honest, this was a really small race probably with only three women running, haha. most everyone did the sane thing and walked. but i still earned a nice gift certificate, so i’m happy.

and i think that’s all i have for today. i hope the weather is treating you well wherever you are; i’ll be back in a couple of days with more.

oh!! one last thing . . . we’ll be finalizing our yarn and goodie orders very soon for our fall in full color club. time is running out to join—once we place the orders, the number is final and we won’t be able to accept more members. unlike the bare naked club, the fall yarn colors are exclusive to members only; we won’t be ordering extras to sell, nor will the dyers have any until next year.

if you’ve been waiting til the last minute to join, now is the time, thanks!