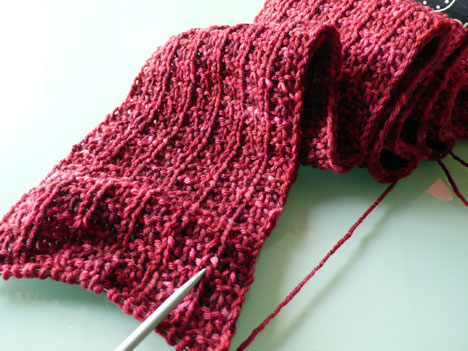 this morning, instead of doing bookkeeping, christmas shopping, or (heaven forbid) cleaning something, i joined debby and susie for some saturday morning knitting. it’s been absolutely ages since we got together and we needed to catch up. i brought along my red scarf, which was almost halfway, figuring it was the perfect project to accompany a good chat (we did, at least, talk about christmas shopping and cleaning . . .).

i ended up staying at susie’s for over four hours and by the time i left, my scarf measured sixty inches. i could stop there, but i think i’ll knit a couple more safety inches tonight before i bind off and weave the ends in. yay.

i was trying hard to have it done and packed to go out in monday’s mail; that way, it will arrive at its destination in time for the december 15th deadline. but now, i’m toying with the idea of knitting another. we’ll see; i’ve sorta fallen behind on my regular work, which i can’t afford to do, but i might be able to pull another scarf out of the bag to go in that box, if i hold off mailing til the 11th. they are kind-of addictive . . .

on the other hand, stopping now means i can get back to work on some of the (numerous) WIPs that are hanging around.

besides the henley sweater, which is going swimmingly now, i have quite a bit done on the first sleeve of david’s fatigue sweater. 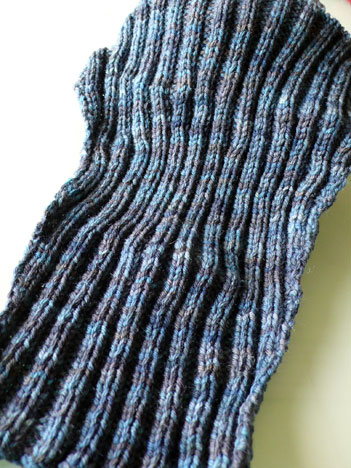 david’s sleeves are bigger around than mine, but shorter (chalk up another point in his favor), so they go pretty fast. i knit this part while i was in albany and needed something to do between projects, and it’s been sitting in its tote bag ever since. it would be pretty nice to finish the sweater for christmas. i think i can, if i buckle down and get going. 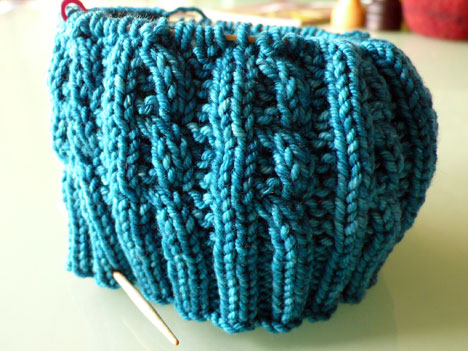 and i’m working my way through my corrected cornrows hat. i’m just doing a couple of repeats at a time on this, in between more major stuff. since i have my ghirlande hat to wear, it’s not such an emergency that i finish it quickly.

speaking of which, i think i’ve finally found a hat shape that i like for myself; i’ve been test-driving my new beret and i love it. they are a great use for a single skein of sport-weight luxury yarn—warm, light, soft stuff that won’t drag off my head from too much weight. and the shape adds a little volume up top, where i could use it. i think i’ll try to knit a couple more little berets before winter is over.

last night i snuck in some swatching with my handspun lace yarn for the new shawl—i had to give in to the urge. it was just a first attempt; i want to re-do it this evening. but i think i finally figured out a composition i like. i just need a nice little edging . . .