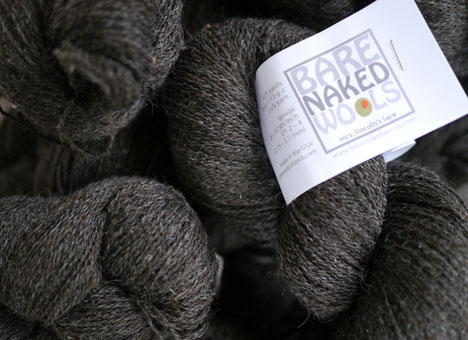 please join me in welcoming to the flock our newest yarn, mrs. lincoln’s lace, which was our bare naked wools club selection in june. received with great enthusiasm by our membership, it’s been trending strongly on ravelry as well, appearing in the top ten picks on yarn board for much of the summer. 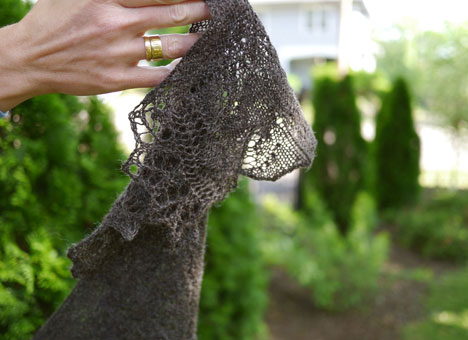 with good reason too—its rich deep color and light weight make mrs. lincoln’s lace a wonderful choice for knitting the lightweight and openwork projects we prefer in warm weather. spun in wyoming from a blend of  lustrous lincoln lamb raised in oregon and chocolate rambouillet from montana, this unusual lace yarn is an american chestnut beauty. 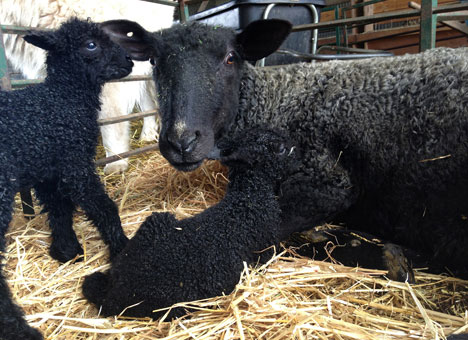 one of our goals in choosing fiber combinations for our bare naked club and retail yarn shop is to whip up a sense of adventure and experimentation, as well as surprise and pleasure throughout our knitspot community—ourselves included. i relish the anticipation that builds once the POs go out to place our orders and wait anxiously for word that a new yarn is ready to ship.

sometimes, my first hands-on experience of a final yarn begins upon arrival of the entire shipment. it’s always an exciting moment to open the big boxes, feel the skeins for the first time, examine the twist, and—most importantly—put my nose to the fiber to take that first deep sniff. especially when, like this one we had to forego a test batch to save on time. i was relieved and pleased to finally hold our first lace yarn in my hands. 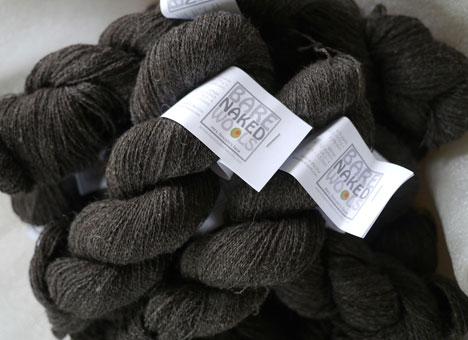 and the color—WOW! i love how it changes character depending on the light. most of the time i see it as a very deep, ashy black/brown, but then the sun will catch hold of it and bits of bright caramel and copper light up its surface to totally transform it. 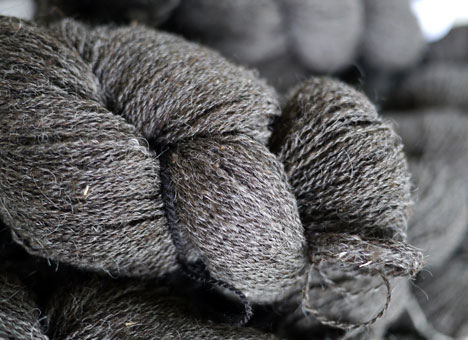 while spun as a lace weight, generous in yardage and with a fairly relaxed twist, being lamb and curly and blended with rambouillet, the yarn has an irrepressible springiness that comes to life as it is knit up. a wonderful time-release treat for the knitter alone to enjoy. click here take a look at all the yarn specs.

so what have we been knitting with mrs. lincoln’s lace? 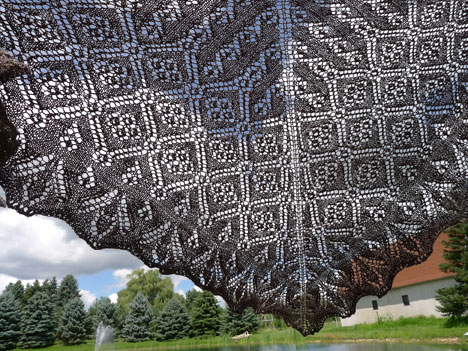 well . . . LACE! we’ve been test driving the yarn in some long-time knitspot favorites, such as wandering thyme, twig and leaf, twinings, and wasp and rose. i think we all agree that the yarn knits up like a dream—while a bit hairy, it is easy to work with and the garter stitch fabric has a good, smooshy feeling. that fuzziness blooms and takes on extra sparkle after a good soak in hot water. 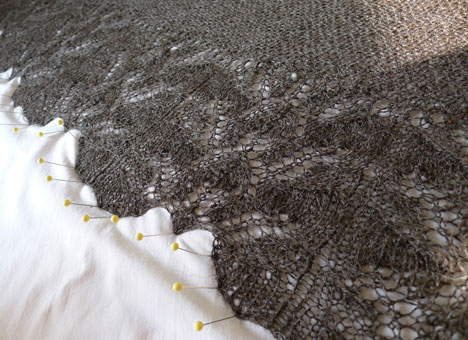 the blocked fabric has wonderful stitch definition and keeps its shape really well, falling into long, light folds that pick up every breeze to flutter about. the club designs that i paired with this yarn show it off to lovely advantage 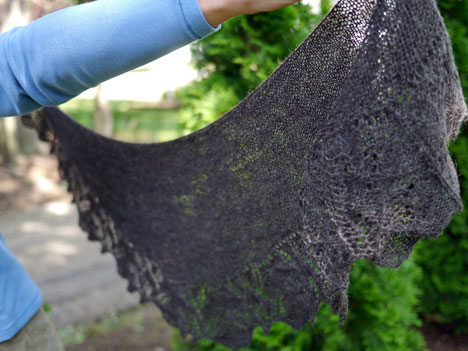 they can be seen in our BNK 2013 collection.

the lincoln sheep—also known as lincoln longwool—is one of the oldest established longwool breeds, originating more than 500 years ago in the marshy lowlands of lincolnshire, england, where it thrived by feeding on the turnip fields of the region. 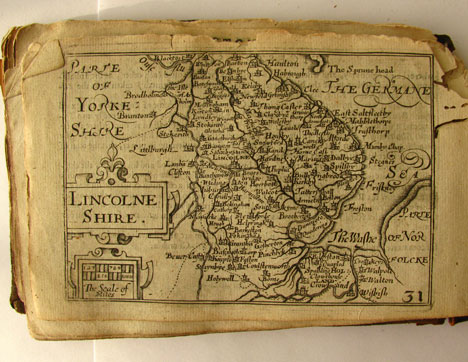 lincoln is the largest british sheep, developed specifically to produce the heaviest, longest, and most lustrous fleece of any breed (before shearing they tend to look as if they are buried in their fleeces). 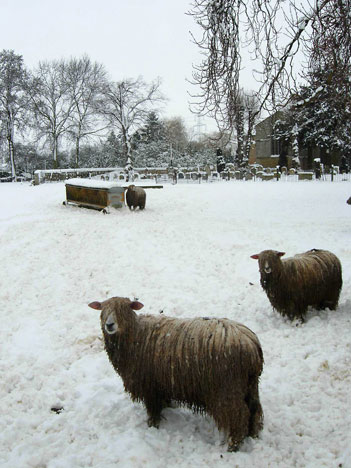 lincolns are heavy meat producers and good breeders that contribute to flock improvement on many levels. one of the four english longwool breeds—the others being cotswold, leicester longwool, and wensleydale—the lincoln has had a significant genetic impact on sheep breeding and is speculated to have had a part in the parentage of all the longwool breeds in england.

archeological evidence suggests that the romans introduced the progenitor of all the modern breeds to england. anglo saxons were adept at spinning and weaving and there is growing evidence of a substantial wool industry in lincolnshire at this time. florentine merchants visiting england sourced more than 50 percent of their wool exports there; at that time, the native fiber was finer than it is now and lincoln scarlett was the most expensive material on the italian market. 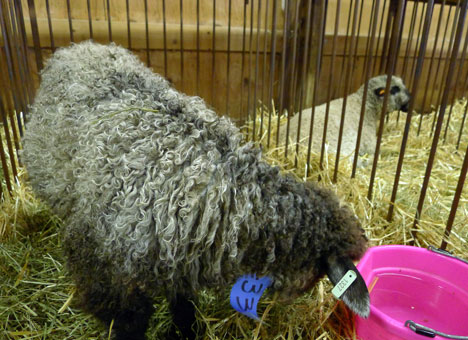 in the seventeenth century the longwool became significantly more important, as huge amounts of it were transported to norfolk, where worsted spinning was practiced. this marks the time of the first written descriptions of lincoln sheep—large with prodigious quantities of fairly coarse wool, which was exported to europe by the ton—telling us that the key features of the breed were set by the start of the 17th century.

as an interesting aside, lincoln were such a sturdy, long legged sheep that they walked freely throughout the district and older sheep were often walked all the way to London to provide mutton, lanolin for soap, and tallow for candles at slaughter. the large size of the sheep meant they were docile, so big flocks could meander peacefully along the drove roads, reaching the city in less than two weeks. 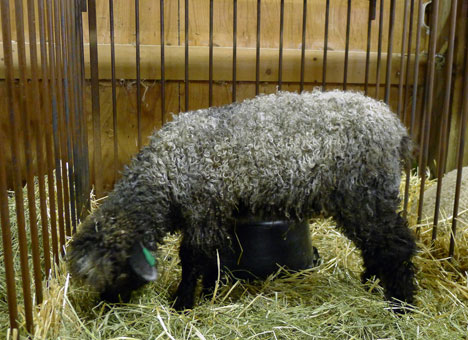 the present-day lincoln developed by robert blakewell is the result of crossing his improved leicesters with the coarse native sheep of lincolnshire. the improved lincoln provided a combination of more and higher quality meat with a higher quality of wool than the “old” lincoln. the wool of the improved breed was of finer diameter and took dye very well while retaining its strength for the combing and worsted spinning processes used at that time. it was this improved lincoln that supplied the boom in production of rugs and upholstery cloth, resulting in the accumulation of great wealth in lincolnshire and surrounding counties for many decades. 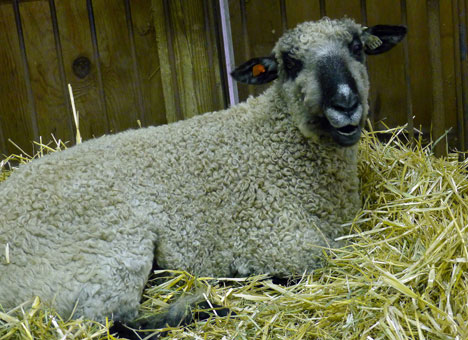 lincoln sheep are large, long legged, deep bodied, and sturdy, though they do require good nutrition to perform well. their wool is long and lustrous, growing to a length of approximately twelve inches per year, with each sheep producing twelve to sixteen pounds of raw wool. their versatile fleece may be white or colored in shades of gray, silver, charcoal, and black and is in great demand for spinning, weaving and other crafts. 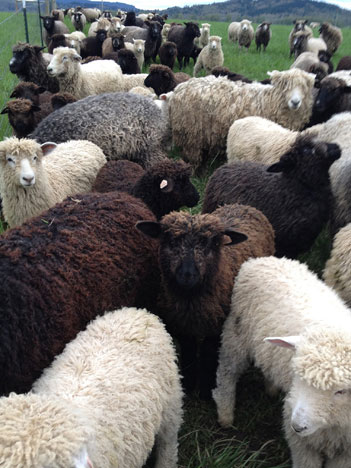 the lincoln was first imported into the united states at the end of the eighteenth century. never a very popular breed in america, it has played an important role in the central states, idaho, and oregon in producing rams for breeding to increase size, hardiness, and wool clip. the national lincoln sheep association was founded in the united states in 1891. during the second half of the 1800s, lincolns were exported to countries around the globe in large numbers and the breed has been generally more popular in canada than in the united states. 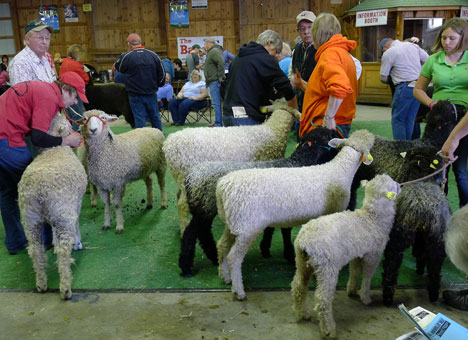 during the 1900s lincoln breed numbers declined, reaching a low in great britain by 1980 of fewer than one thousand remaining purebred ewes. since then, numbers in the breed have increased due to a revival of interest in the breed’s wool. like most other longwool breeds, the lincoln is classified globally as rare and faces an uncertain future. one challenge to the health of the population is a disagreement about the place of naturally colored lincolns. the british association does not register colored sheep, causing concern among those who enjoy using the range of colors found in their fleeces. the national lincoln sheep breeders association in the united states registers colored lincolns as part of the breed while maintaining separate flock books for white and colored sheep. 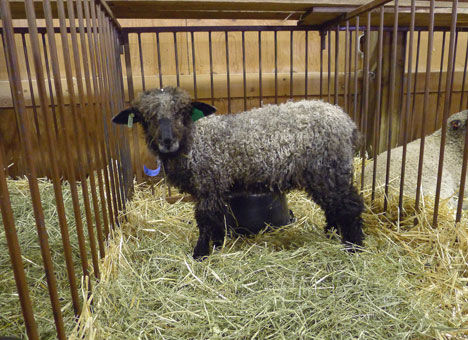 the lincoln advantages and benefits:

life is better with lincolns—that’s my motto. i’ve been raising sheep for over twelve years now, but started with lincolns ten years ago and never looked back. they are intelligent with fun personalities, a large frame, and unique fleece in a wide range of colors. when people purchase breeding stock from me, i warn them that lincolns are like potato chips—you’ll never just be satisfied with having one or two. 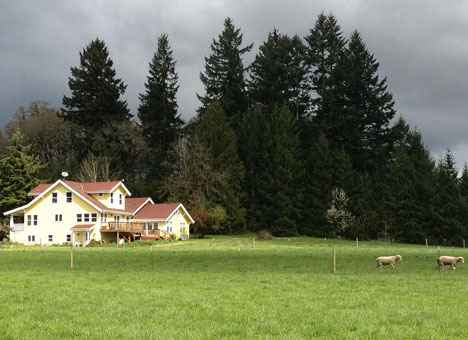 i got into sheep from a fiber perspective—i was already a spinner and knitter and had done some weaving and felting as well. with four school-aged children underfoot, i wanted to turn my hobby into a home based business. we already had some romneys, but every year i purchased a couple of lincoln fleeces from a breeder in california; she sold me her last two purebred lincoln ewes when she put together a wensleydale program. i gradually increased the number of lincolns in my flock, eventually choosing to focus on the breed exclusively in 2009.

the north valley farm lincoln flock, located in the yamhill valley of western oregon, now stands at roughly sixty brood ewes, one of the largest flocks of registered lincoln sheep in north america. lincolns are a rare breed worldwide, with fewer than one thousand animals registered between the united states and the united kingdom, their country of origin. 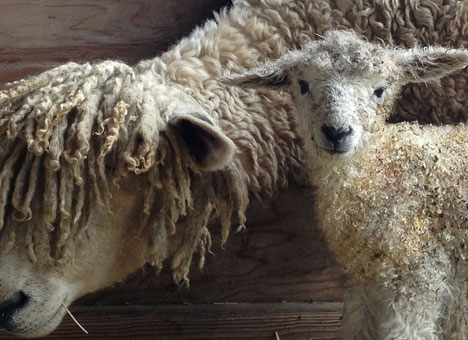 i believe that the future of the breed lies with proving that it can be economically viable. to this end, the north valley farm lincoln flock brings together specialized agriculture and industry. eighty percent of the farm revenues come from direct meat sales of grass fed lincoln lamb to private individuals as well as some of the portland area’s most highly rated restaurants. we also sell breeding stock, raw fleece, roving, washed locks and pelts.

our natural colored lincolns include many solid black or charcoal animals, the rarest and most recessive of the colors in this breed. projects such as the bare naked wools knitting club help support growers of this heritage breed and allow consumers to experience its wonderful qualities. so the future is indeed bright for this rare and wonderful breed of sheep. thank goodness life will continue to be better with lincolns! 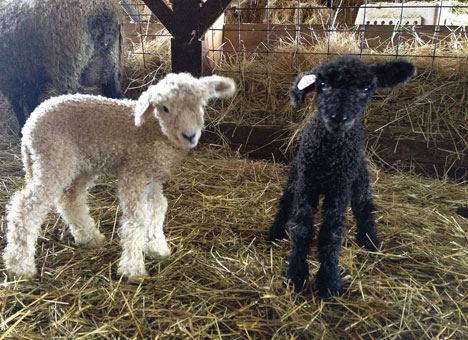 and as we like to say around here: yarn is good food; come and get it.