i don’t even know where to start today. my students are going to LOVE this!

first of all, i have to rip back on that cable sweater . . . again. guess what? i didn’t read the pattern! at least, i didn’t read the one important word of the pattern. where it said to increase every third round after the neck join.
oh brother. i had been increasing every second round up to that point . . . i will be mocked and shamed in classes tomorrow. it will be a free for all because i didn’t read one little word correctly. %@&$!
everyone will think it’s ok for them not to read their pattern, and i’m going to have to do it for them. we’ll be starting at square one. oh groan. and i was just getting everyone to a higher level with that.

however, the cable contest is still on; no winner yet! i took a picture before ripping it back. i am not mad at the sweater; i still love it! it’s just taking longer to get off the ground than usual that’s all. i have not been very focused on it. blame the moss shawl. 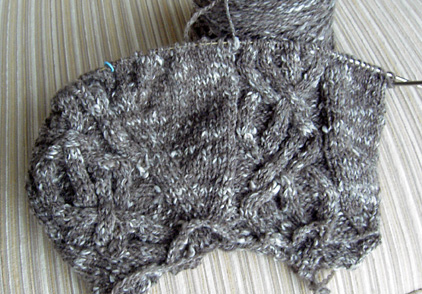 ok, let’s review:
day 1 clues: i’ve had my eye on a certain obscure and little-used (ok, i’ve never seen it used anywhere) cable pattern for several years. you can see that the cable chart is complex (more info later). i have only ever seen it in one stitch book. now this cable, which i will not reveal the name of yet, is not symmetrical at all. it does not mirror itself from side to side or from top to bottom.

day 2 clues: it’s 24 sts and 34 rows. i had to translate it to the international charted symbol system to make my life easier. also, i own a LOT of obscure knitting books; i’ve been collecting them since way back when you could get them for 25¢, if not for free from the trash.

day 3 clues: i did not begin on row one of the pattern. the clue about the obscure stitch books yesterday? that was just to throw you off (i swear, everything else i told you is true!) (really. it is). i do own a lot of obscure knitting and stitch books, but that has nothing to do with this cable. the book it comes from is still in print. and, though it is not symmetrical, it is a “swing” type cable. that is when the motif reflects and turns asymetrically on itself. the cable looks exactly like its name.

now for today’s clues: it is included in a book that is part of a series. but which series? the harmony guides? barbara walker’s treasuries, the mary thomas books? nicky epstein’s books? hmmm.

all right, now i’m going to talk about something different.

today i went to my workroom to gather inspiration for the week’s posts. the thing is, that “stuff” doesn’t inspire me as much as you would think. i do have a lot of yarn, but the yarn is only to feed my real muse: stitch patterns.

as a very small girl, i used to climb up on the sofa and gaze at the afghan draped over the back. this was an afghan that my grandma made sometime in the 1950s. it was made from alternating squares of dark and light blue, each in a different pattern, from a columbia knitting pamphlet. i was absolutely fascinated with this thing. i would lay on my back and probe the stitches, working a finger through the spot where the cables crossed, putting the holes of the lace up to my eye to peek through, looking at the front, and then the back of the patterns, and trying to make sense of just how MUCH there was going on at once. it boggled my mind, but all i knew was that i wanted to do that. i pestered grandma til she finally taught me.

my first knitting book was this:

i got it for christmas when i was 8 or 9 years old; i had been knitting for several years already, and i wanted something like this SO much! i was so excited, but i was warned that i “had to share”. yeah right, like the other kids were fighting me for it! hahahaha! it was published in 1963, translated from french. it has a LOT of errors (which i didn’t know when i was a kid . . .).

anyway, since then i have indulged regularly in any good stitch compendium i could find (preferably used and cheap, though).

these are my everyday copies of my most-used books. see how the barbara walker books are falling apart and full of post-its? seriously, i think i use them every single day. well, i don’t worry too much, because if you look closely at the bookshelf again, you’ll see that i have hardcover copies too. the hardcovers are my “good” copies (though they also are used and well-worn).

now, i axe you, what kind of person has “everyday” AND “dressy” copies of her dictionaries? duh, the geeky kind, that’s what! to be fair, i acquired a lot of these books back when knitting books were a giveaway at the charity shops; i couldn’t bear to see them in the trash! i couldn’t afford some of these now; have you looked at ebay prices for this stuff?? holy cow!

what is this all leading to?
well i was photographing my stash closet to write about that, but inside, i saw this:

this is my swatch box. in it i put all my various swatches from things i have made, or just when i am swatching for fun. you know, from the stitch books.
what did you say? well, ye-ah i do swatch for fun—what about it?

doesn’t that look like it was fun? i will sometimes settle in for days of swatching, usually when i want to start a new sweater or shawl and need several stitch patterns that must work together. but sometimes also just to try new stitches, or when i get a yen to do some color work, of which i am not very fond in large doses.

now, you might notice how very many samples of fair-isle there are here, for instance, while you practically NEVER see fair isle in any of my finished work. that’s because i find it fun to swatch fair isle. enough fun that it is all the fair-isle i usually want to do. some day i will have a great reason to actually make something bigger in fair-isle, and i will be prepared.

sometimes i swatch just in order to get my hands on a new yarn. i might do it just to get it out of my system. and i might even use the experience to write down what needle i used and what the yarn might be good for:

that way, if the item has to wait in a queue for a while, i will have the info when i need it. of course, i have pre-designed many, many things that i have not actually knit:

the bulging book in the lower right corner is an example of my swatch books. the rest of the books are various sketchbooks from over the years. some have knitting, some have drawing and painting. most have a mixture of everything.

tomorrow, i swear, i will talk about the stash. i was going to today, but then i couldn’t think of very much that is interesting about it.

to end the post today, i bring our fair lady, mildred moss: 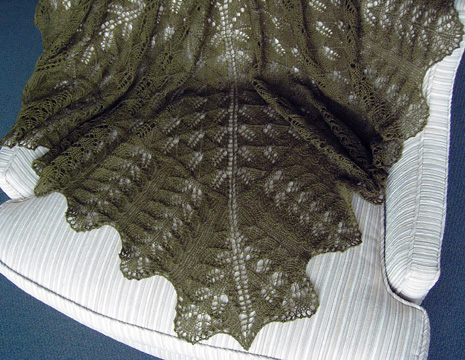