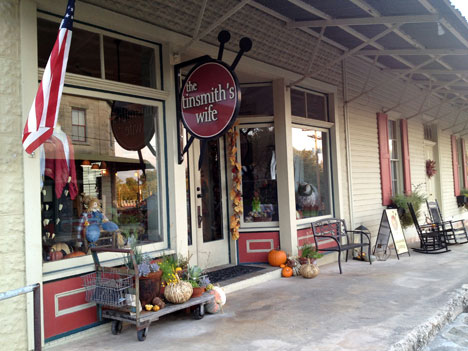 here i am in comfort, texas—one of the cutest and quirkiest towns i’ve had the pleasure to visit. seriously, if you haven’t been here, you gotta visit, especially if you knit—comfort also happens to be the home of the tinsmith’s wife, a true “destination” yarn shop.

even if you’ve been here before, you’ve got to come back; the “wife” moved to a new home in june which you have to see to believe. formerly housed in the original tinsmith’s shop next door, the shop was bursting out of its space. when the building next door—which can only be described as vast—became available, owner wendy solberg leaped at the opportunity to take it on. 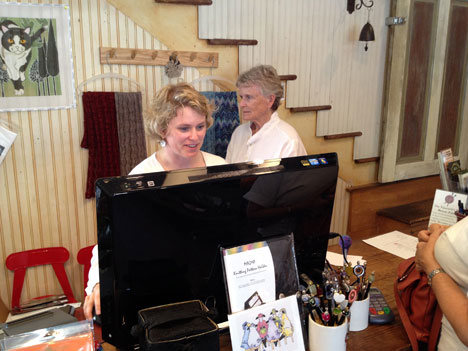 now they are housed in what was originally a furniture factory and most recently an antique store. the ceilings are about twenty feet high, i think and the rooms—six in all—are cavernous. 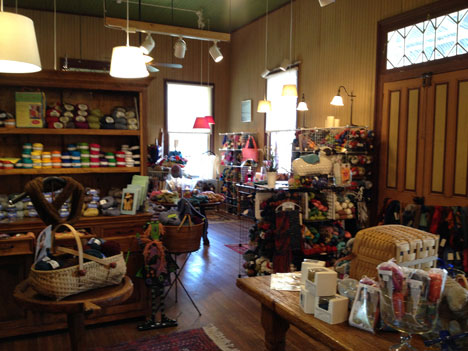 now they have display space galore along with several large seating areas filled with comfortable sofas and easy chairs. 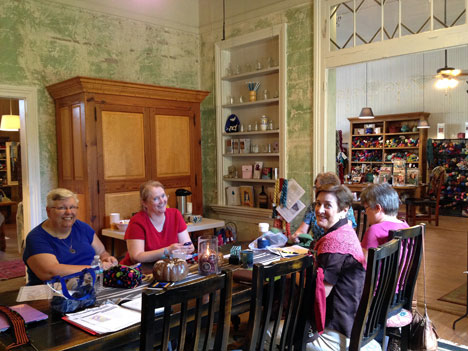 knitters gather at all hours around HUGE communal tables—well, let’s just say the that shop lives by the rule that “we do everything bigger in texas”

there’s comfortable space for the non-knitters to hang out as well and not the kind where they end up felling like they’re in the way—there’s a quiet back room away from it all where one can settle in to read quietly or rock a baby. 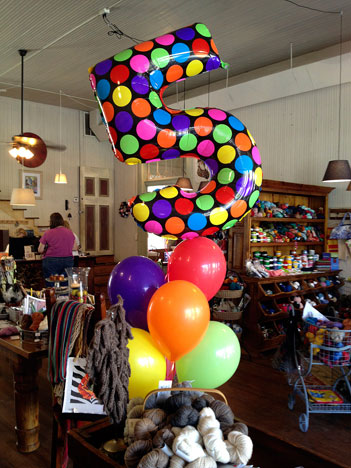 wendy opened her shop exactly five years ago, which is why i’m here—we are celebrating with an anniversary retreat; the shop has carried knitspot patterns since it opened and wendy thought it was time i got myself out here to meet the gang. 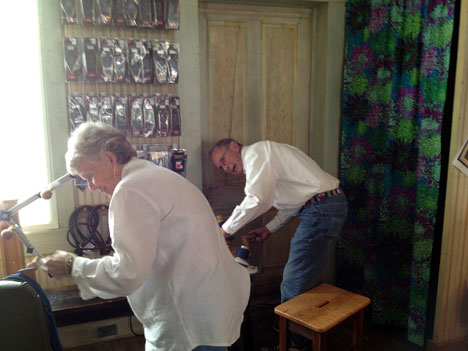 wendy operates the tinsmith’s wife in partnership with her parents, susan and bill (better known to everyone as mom and dad). i swear i tried to get a better photo of the pair, but they just wouldn’t stop moving! 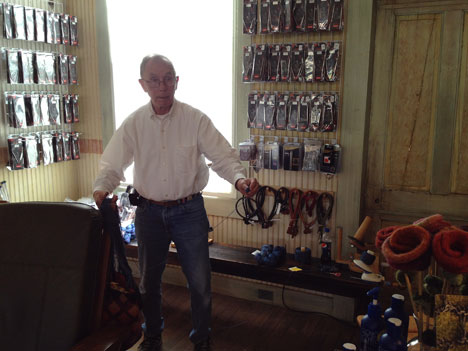 dad may look like he just winds yarn all day, but in fact, he is the heart and soul of the shop and quite an accomplished knitter. he is the force behind many of the shop’s gorgeous samples; he especially enjoys lace knitting. 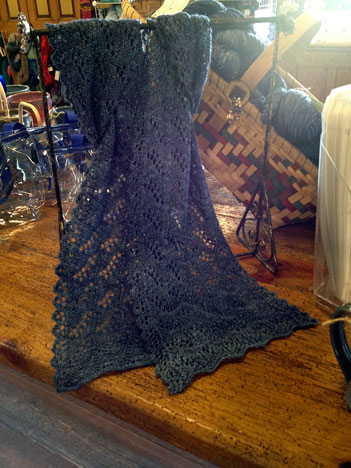 in fact, he is the person responsible for “whipping up” (his words) the beautiful shop sample of my anniversary scarf design, rain on a hot tin roof, which we unveiled this weekend at the celebration and which is the project we are tackling in today’s lace project class at the retreat. 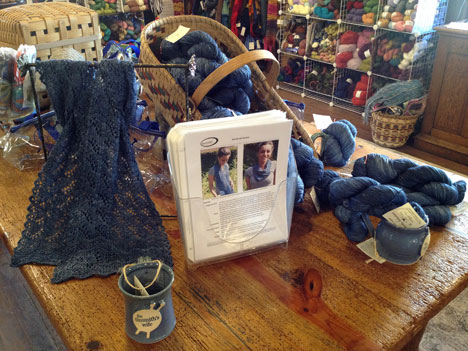 more about the design and pattern tomorrow or tuesday (as soon as i can get settled back at home, ok?)

as you know, i have been on many, many, wonderful teaching trips and while i can’t ever say that one place is my favorite over every other (because the next favorite place could be right around the corner, right?), i have to say that EVERY time i’ve taught in texas, it has been a complete pleasure in every way.

texas shops, events, and knitters are the happiest bunch i’ve encountered anywhere. they are welcoming in ways i can’t pin words on. they make me realize over and over again how much joy there is in our craft. 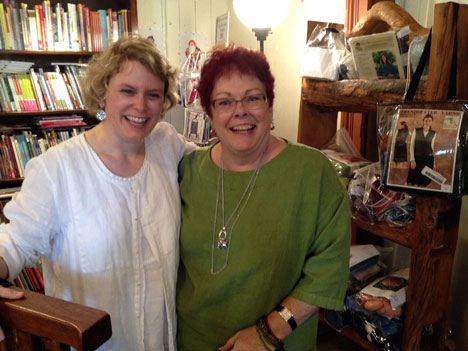 one of the happiest moments of this trip was (finally) meeting our friend alvine in person (left, above with wendy), who has been participating in the blog since the very beginning, as well as our ravelry groups and clubs when they came along. she is a faithful purchaser of printed patterns and we mail a packet off to her almost monthly, so she knows both david and myself rather well. when wendy introduced us the other day, we gave each other a BIG hug without hesitation—these are the moments i treasure about travel teaching . . .

we also went to lunch soon after, haha. like i said, comfort is small, but wonderful—the buildings here are old, with many original ones still standing and in use. for such a small town, there there are several delicious cafés, tasting rooms, and artisan shops; the town is also known for antique and second hand shopping.

it’s a great place ot run as well, just saying; yesterday when class started at 10, i was able to get out for a really nice run in the early hours. i had to skip it today however, because it doesn’t get light enough until 7 am and class starts at 9. so, i got to blog instead, all good.

another good thing about this weekend—i’ve been getting quite a lot of knitting done. i worked on my secret project on the plane and got over forty rows done—even though i took a couple cat naps as well (i was really tired friday). getting this one further along is my biggest priority for the next few days. 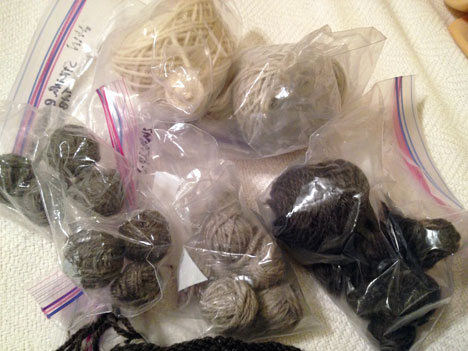 i do need a project i can knit in public though, so before i left home i organized some projects i could knit on while socializing at the retreat. we had a lot of little balls of our confection worsted to deal with after that photo shoot last week, so i packed a bunch of those to knit up a stripey version of the rain on a hot tin cowl. 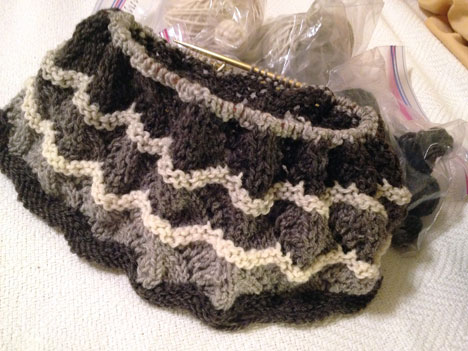 i’m alternating all five shades of the yarn in progressions between the lace bands and the reverse ridges that separate them. since we have so many of these yarn balls to play with, and since it knits up so fast, i’ll probably try the same strategy in a different arrangement as well. i think it will be quite striking when it’s blocked. 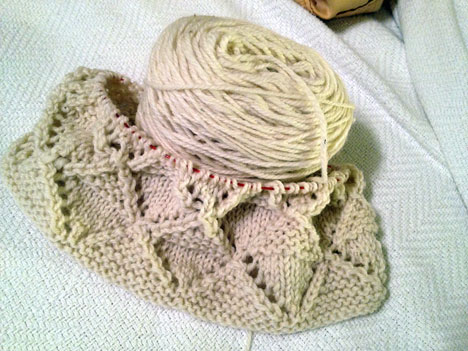 ok, now i really gotta end this post—the inn is stirring and i need to get down to breakfast and then start class. happy trails, compadres—see you when i get home.

(sorry, no time to proofread this; please forgive any typos!)