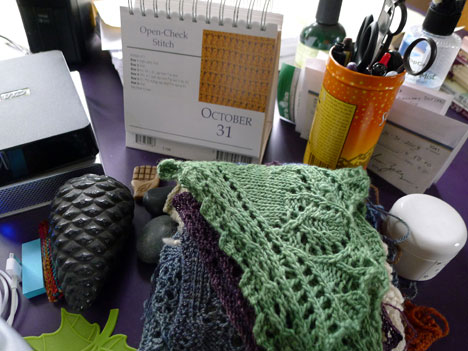 the weather turning colder and the the daylight hours growing shorter each day can only mean one thing—it’s about to be halloween. and as most of you know, this day of all days is very special on our street! 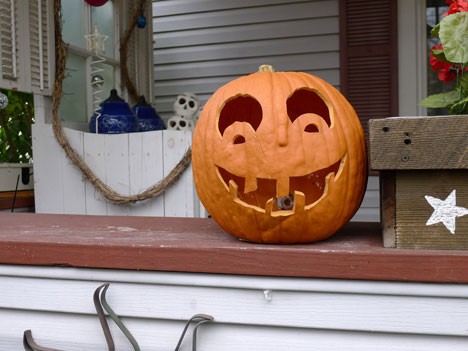 each year our friend bret across the way puts on a spectacular halloween display, which he spends months designing and weeks putting in place. many of you have come to anticipate the shining results which i try to show off every october 31st in a special holiday post. 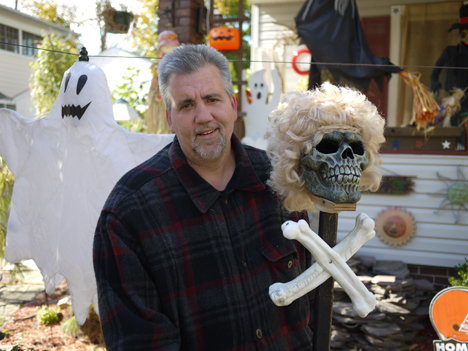 and of course the neighbors—kids and adults alike—just adore coming to the halloween house as it is known around the ‘hood. bret never fails to amuse, entertain, and terrify us with new tricks and treats. 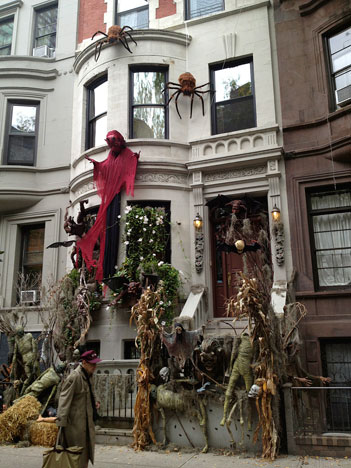 last year due to the advance of hurricane sandy, i was stranded in NYC over halloween and couldn’t photograph bret’s house. while i found a very compelling subject to photograph just around the corner from my hotel (seriously, what are the odds?), it just wasn’t the same as bret’s handiwork. and then when our hotel lost power and internet service on the big day, i knew that fate was stepping in to prevent me from posting an imposter in the place of his display 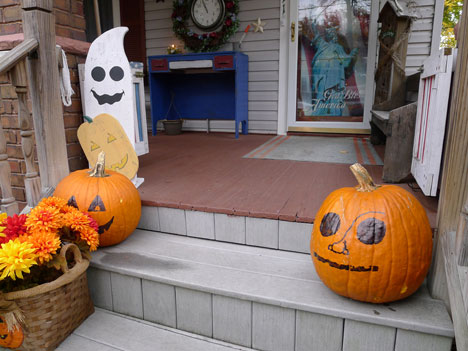 pretty soon, october 1st rolled around and i went off to texas. when i got home i noticed a few decorations on bret’s porch and smiled to myself—it was beginning. the next ten days or so were such a frantic rush to get the october club chapter out and a bunch of other commitments met, that i barely felt the time elapse. 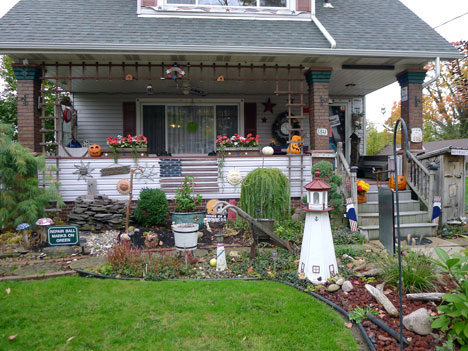 just before i left for rhinebeck, i pulled my head out of the sand and noticed something was amiss . . . bret’s house still looked as unadorned as it had a couple weeks earlier—definitely no big displays in progress. i asked david if he knew of anything not quite right across the street, because it was the middle of month and the house had not been taken over by the usual ghouls, goblins, and ghosts. which was impossible under normal circumstances.

sure enough, it turned out that bret has not been feeling himself and wasn’t up to the task of getting the display up and running this year. oh, if only i’d known earlier—we all would have gladly pitched in to help (and believe me, we WILL be at the ready for the christmas decorating). by the time i returned from rhinebeck, it was pretty much too late—trick or treat happens on the sunday before halloween in our neighborhood; i was just getting home at that time.

phooey—and truly disconcerting; october just isn’t the same without all the usual hoopla.

so i came up with a selection of highlights from halloweens past, hoping that you and bret will enjoy a little walk down memory lane—but be sure to bring protection; you never know what may jump out of the bushes! 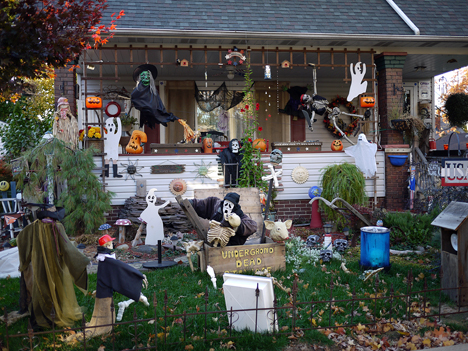 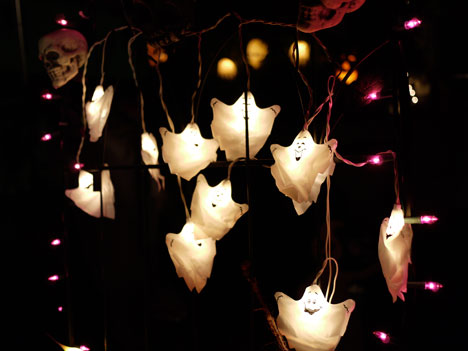 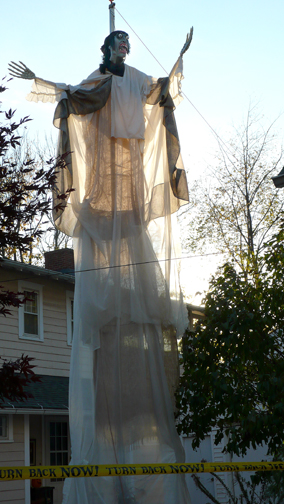 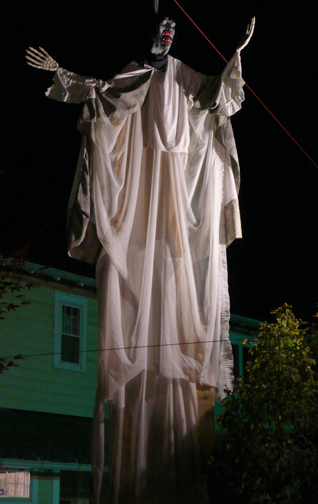 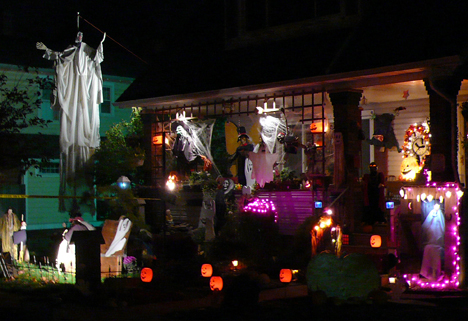 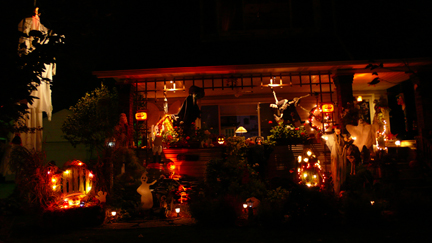 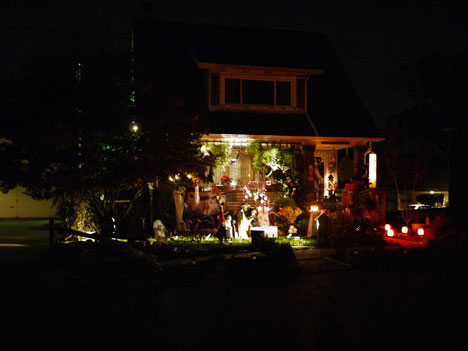 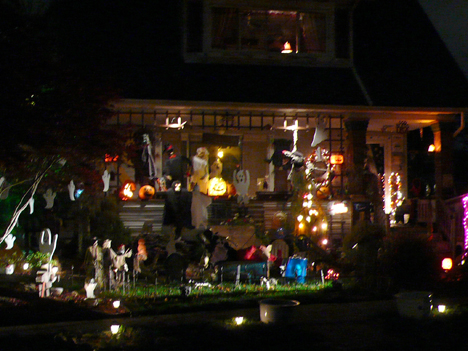 i went over to chat with bret on tuesday and yesterday, snapped a few photos of his rather sedate display. as i was turning to go back to my own house, i was greeted by these, hiding almost unnoticed near the ground at the side of the walkway 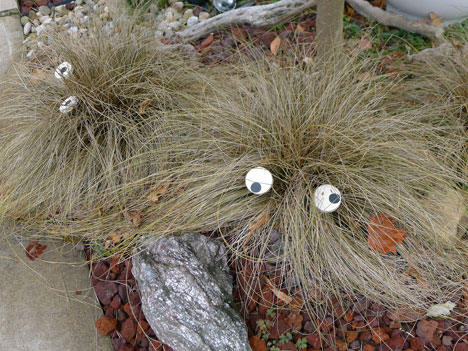 haha, bret might on the mend physically, but his sense of humor is definitely as sick as ever!