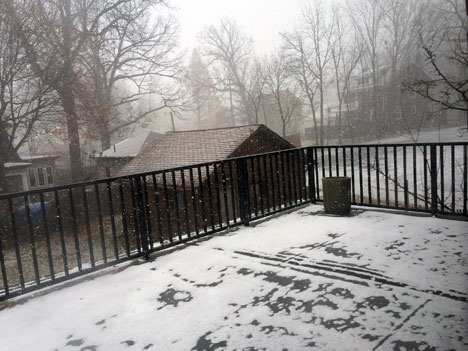 we’re at the start of our first snow storm of the year—it’s supposed to be a big one. that said, we’ve been fooled many times in the last few years by dire predictions of blizzard-sized snowfalls and then . . . nothing. 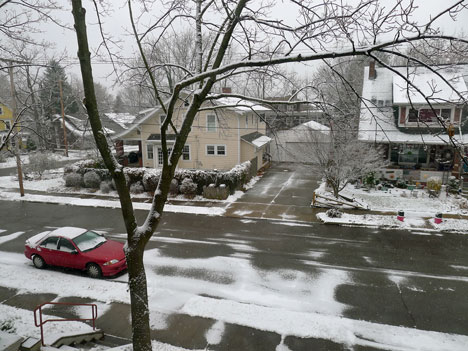 THAT said, the snow did start falling several hours earlier than expected and has so far, not let up. 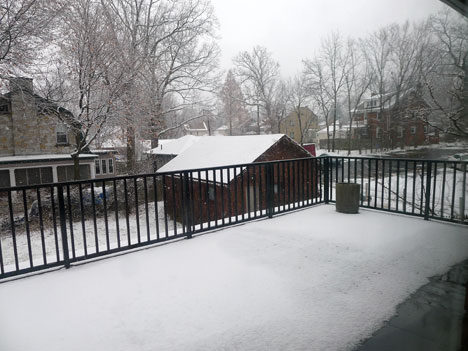 it’s accumulating, alright.
(can you believe how dim the light is here at this time of year?  these photos were taken at 10 am. yep, it’s like this from november 15th to about january 15th—perpetually dusk. it makes me want to knit and listen to ibsen.)

it snowed most of the day on sunday as well, though due to the high winds, not much accumulated. temperatures stayed in the teens all day, with a wind chill in the single digits. 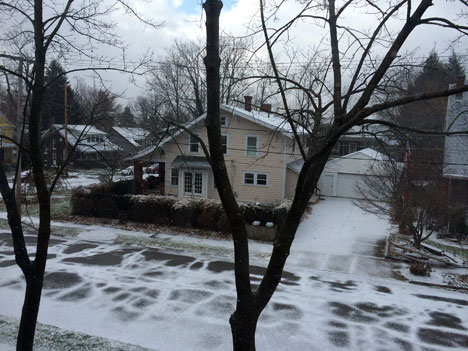 it was a good day to stay inside and do fibery stuff, which is exactly what i did.
(this weather really puts a dent in my running routine; maybe it’s time to reconsider that gym membership i keep putting off?) 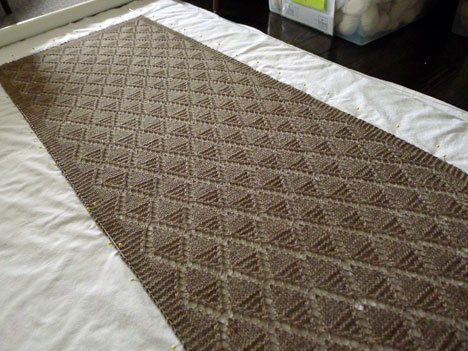 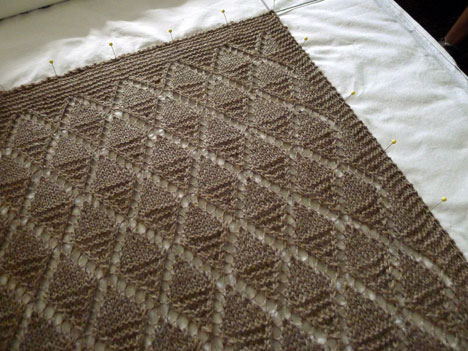 i just love how these yarns have both a soft, luxurious drape AND great stitch definition with body. plus there is a bit of lustre that highlights any texture to beautiful effect. sigh, it’s a great balance.

anyway before adjusting the pattern, i wanted to see if reblocking it would produce the desired results. 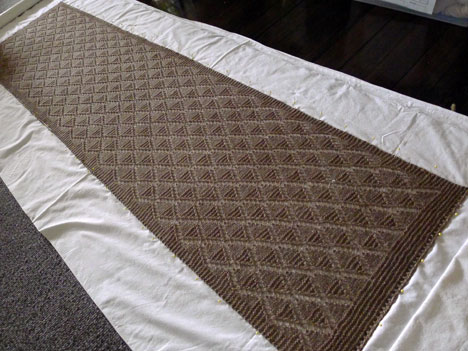 well, almost—the length is still a bit shy of what i intended and the width a bit too much in proportion (no worries, there is a tall size too!). if i took one repeat off the width, that would leave plenty of yarn to knit three more repeats on the length and then no one would be struggling to stretch it. it could even be left a little more relaxed to accentuate the depth in the texture.

when i went to texas in october, i knit up a quick cowl of the same fabric design, using our confection worsted. i’ve created a scarf/cowl pattern for that design too, which also knits up in two yarn weights and several sizes, including a scarf option. 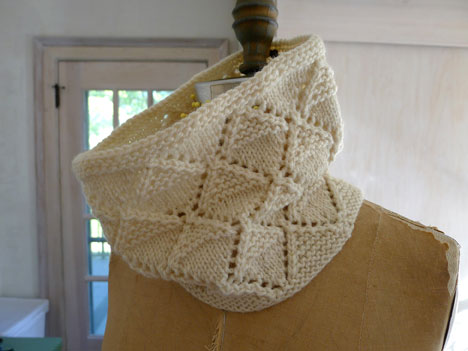 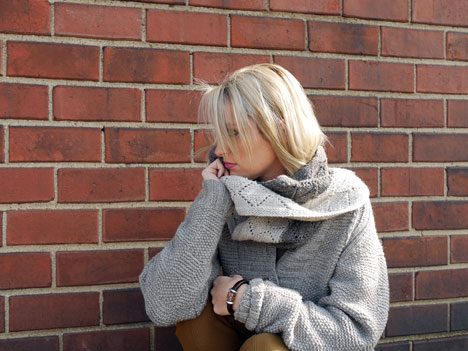 which sarah has been wearing pretty much constantly (even when we’re not doing photo shoots, haha). 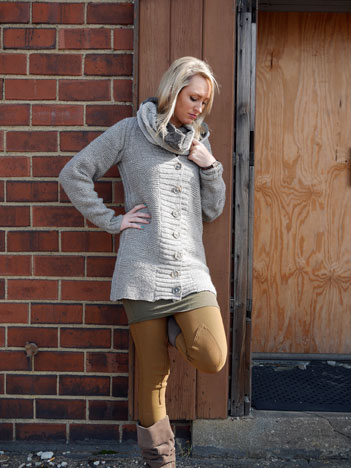 anne also knit her a bloch ness sweater—totally not fair, right? (so—what do you think; could i pass as sarah, move into her room, and become part of that family??)

probably not, huh? her dad might notice something is off there . . . 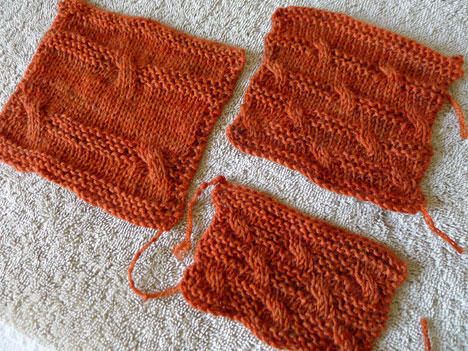 i washed my swatches for the red scarf project that i was showing you the other day. i thought it was interesting that so many people made comments about preferring one stitch pattern over the others—i actually plan to use all of them in the coordinating projects i have planned, so everyone gets their wish. 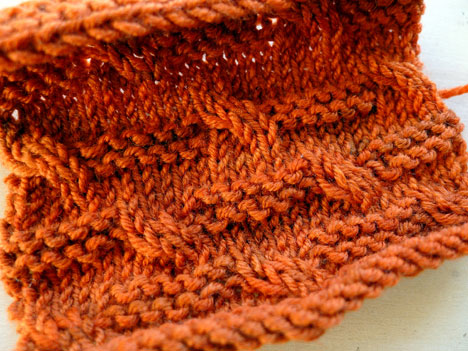 it’s always a good idea to wash your swatches so you can get a good idea of what the fabric will be like in its final state. this fabric, for instance is very cushy, lofty, and springy before washing—so much so that it’s curling up tightly and doesn’t want to lie flat. the fabric feels pretty dense. 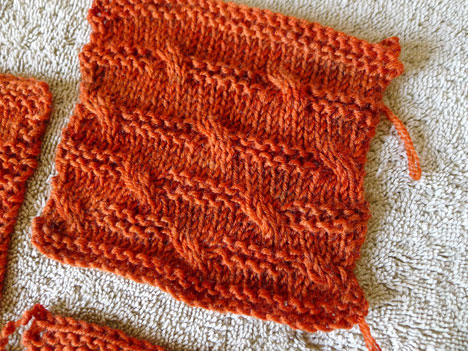 it’s a lot different after soaking—still lofty and soft with good stitch definition, but the fabric feels thinner because it has relaxed out; i am definitely sticking to the smaller needles i swatched with rather than the larger ones for my actual projects. 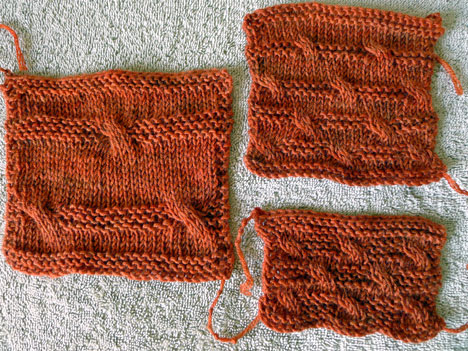 what i was thinking is that the stitch pattern on the bottom right would be great for hems and brims and such, since it is most densely patterned and lies flat really well. the medium-density pattern (upper right) would be used for the scarf body—it has just enough garter stitch to also lay flat, but the texture is lightened up a bit which reduces any stiffness and lends a nice hand to the fabric.

the most open fabric (left; my personal favorite) will be used for the body of the slouchy hat because it has such terrific drape; the garter ridges and cables will give it enough body and weight to plop over in just the right slump. also, it reminds me of the patterning on bocce balls, which i always found charming. the brim will be worked in the firmer, more textured fabric so it holds its shape the way a good brim should. 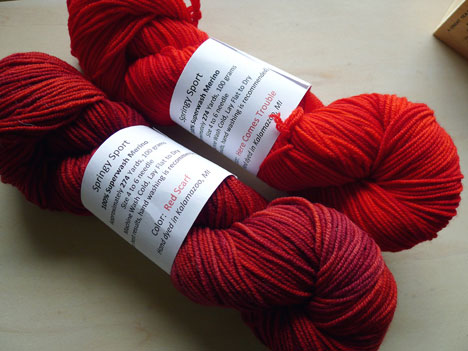 and wouldn’t you know, while the swatches were drying yesterday, the yarn arrived from studio june—SO exciting! how about THEM reds, huh?? i just love the names . . . want a closer look? 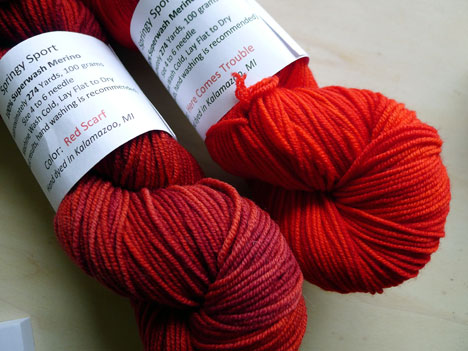 YUM.
(alright now, mind that drooling on the keyboard)

jill really outdid herself with these. she also sent a lovely blue option for the test knitter which, in my immense excitement, i totally forgot to photograph. but you’re going to love it, trust me. i’ll show you that next time.

i am SO psyched that the yarn got here before thanksgiving and that i’ll be able to kick this project off this weekend. 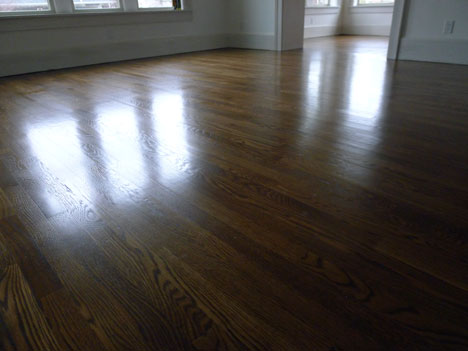 we’re going to have a quiet thanksgiving at home this year because, TA-DA! we are finally able to get into our very own kitchen (just in time; it was getting really cold out on that porch, haha). there are still a few odds and ends tasks to be finished up, but at least now we can do some simple cooking.

we may wind up spending the day organizing cabinets and unpacking dishes that we haven’t seen in eleven years, but that actually sounds like fun to me (i WAS originally planning to organize my bedroom closet and drawers for the holiday, haha, but i might have to put that on the back burner now; no pun intended). and somebody has to do it before the december holidays and ensuing company are upon us.

the big reveal deserves its own post though, which i’d love to cajole mister knitspot into writing. i think it’s only appropriate, don’t you?

other than that, we are preparing for our black friday and cyber monday promotions—details are in the newsletter that erica sent out today (along with all kinds of other good news). if you haven’t received it or you’re not on the list yet, you can read it here—it’s chock full of goodies and worth a click. 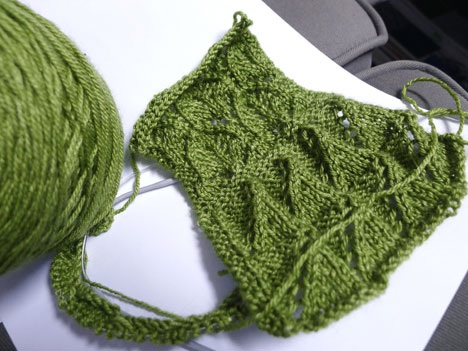 if i do get some knitting time in the next few days (which is likely, considering how the snow is falling now), i’ll probably be working on this—something new and tasty! for now, we’re calling it “christmas surprise”; the flavor is lime rickey. i’ll leave the rest to your imagination . . . 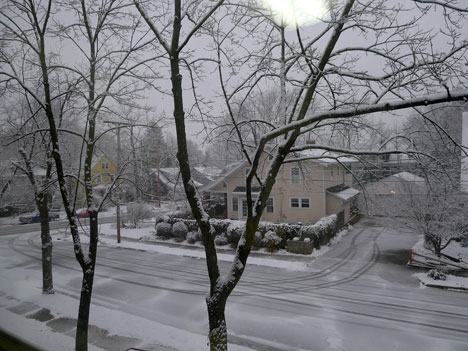 i don’t know if we can exactly call these progress shots, but it certainly looks like there is no turning this storm back.  i may have to stay home from yoga class tonight . . . 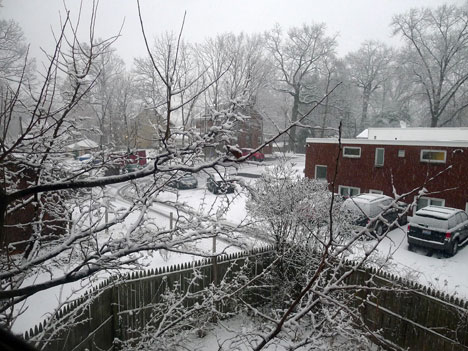 12 thoughts on “as the snow flies”