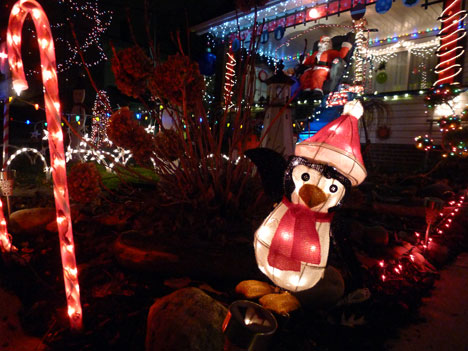 i never noticed this in christmases past, but bret’s little penguin is actually knitted (in my defense, there is just SO much else to look at over there, it completely passed me by). 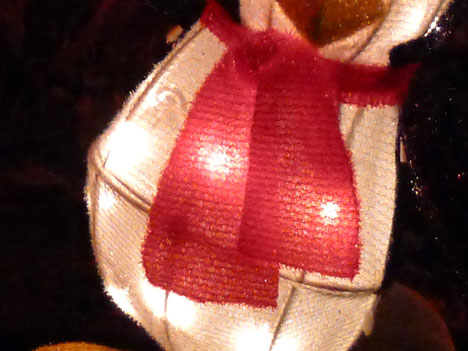 but yes—when you look close, it’s constructed of a garter-stitch net, knit from what appears to be some kind of plastic bouclé, that is pulled over a wire form.  even its little scarf is garter stitch—wow. just wow.

i think i can speak for all of us when i say the we’ve been on pins and needles to know if bret’s annual christmas display was going to happen across the street. we sorely missed his halloween presentation and have been beaming  up communal karma that the universe would come around and settle in the right alignment for him to be well enough to execute the christmas design he had drawn up. usually he starts on the day after thanksgiving, but not a creature was stirring over there that weekend. i would have begun feeling nervous, but i knew that the bitter cold was keeping most of us indoors; even i wasn’t running much. 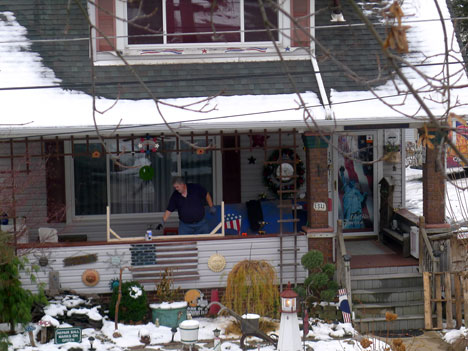 about a week later though, i was working away at my desk when i noticed building materials being dragged out and something happening with them. 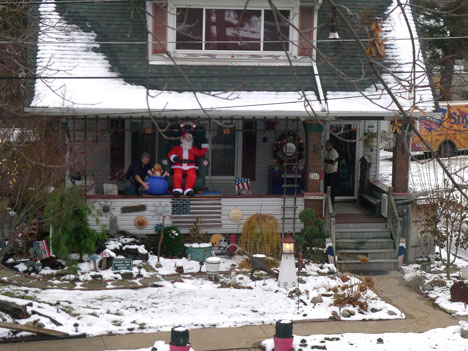 over the next couple of days, santa’s throne sprouted on the porch and following that, the man himself to fill it. 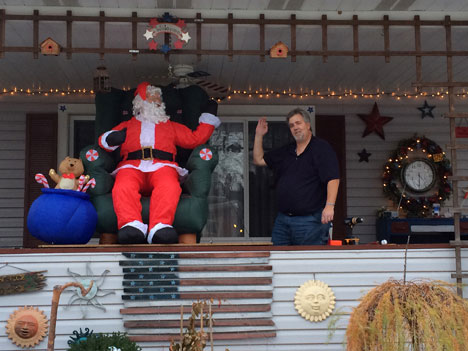 while out running one afternoon that week, i saw bret had added some lights and mechanized the figure, so i stopped  and snapped a few pictures. 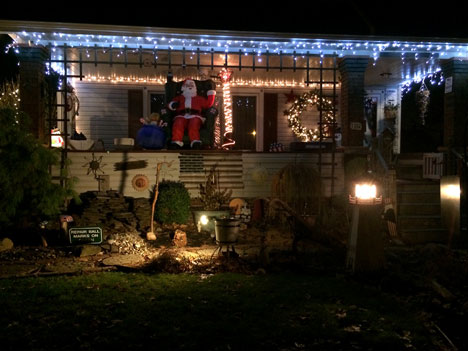 over the next few days, as the weather warmed up, he slowly added more lights as well as the north pole to santa’s left. 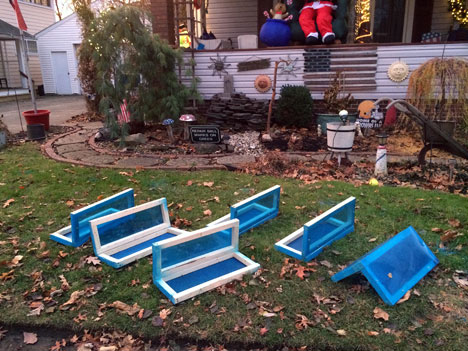 then these appeared on another day—the mysterious parts for some new constructions that i couldn’t really fathom. 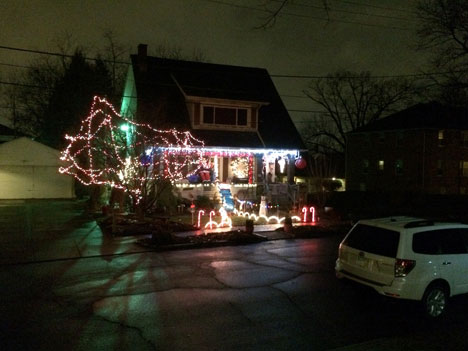 we went away on a fiber scouting trip over the first weekend of the month and when we returned, even MORE lights were up, along with some candy cane paths and hanging decorations. no snowmen or elves yet; i always look forward to those. 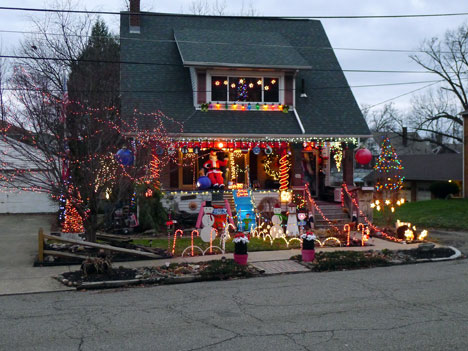 the whole design is finalized about two weeks before the holiday, maybe a little less this year, as bret was taking it very slow. but it was definitely all done by the time the boys arrived.

yesterday while we were putting the final touches on dinner, i noticed that the light were particularly vivid against the gray dusk, so i ran out to get some transitional photos. 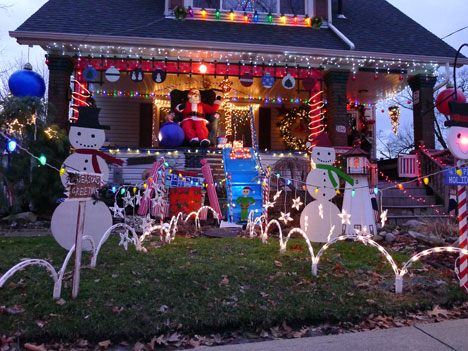 look how colorful it all is—i love all that blue with the reds and whites. 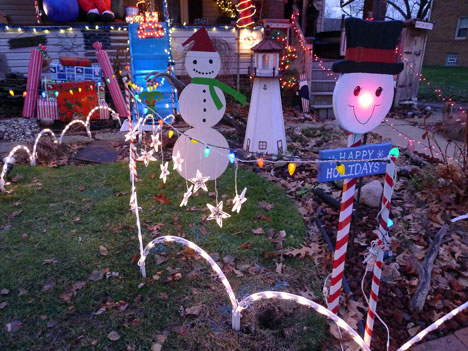 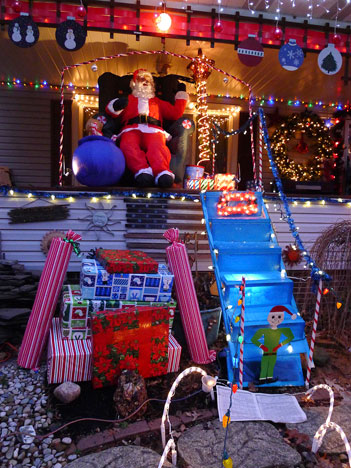 which go straight up to the north pole and santa’s throne. a huge pile of presents waits at the bottom for the sleigh and eight reindeer to come by and pick everyone up for tonight’s flight around the world. 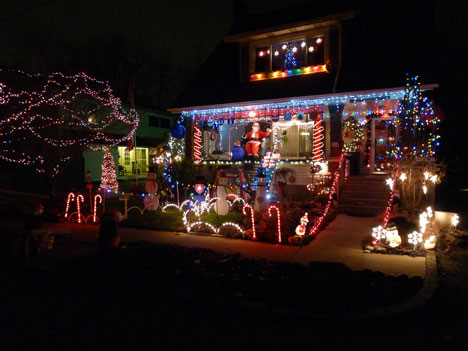 just a little while later, night had fallen and the glow from across the way intensified. 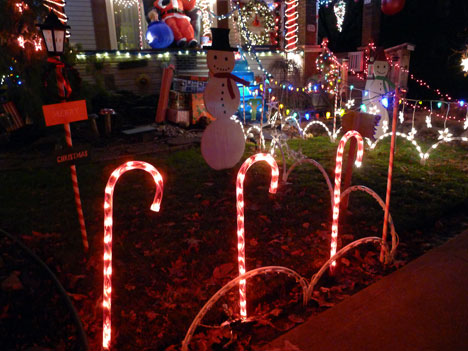 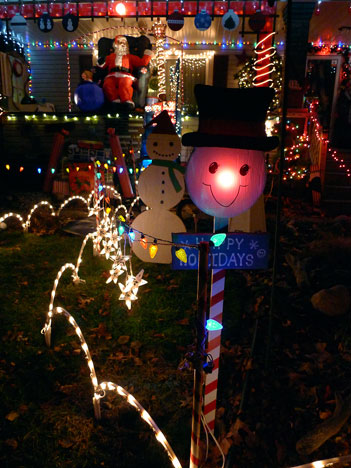 time to walk the walk and discover each piece—frosty is waiting to escort us. 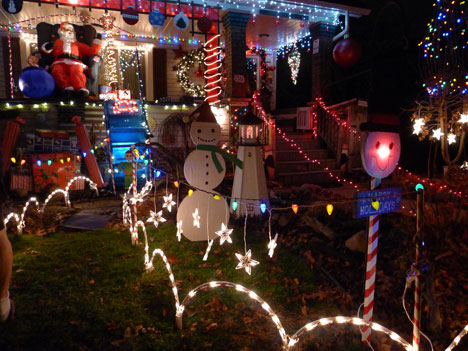 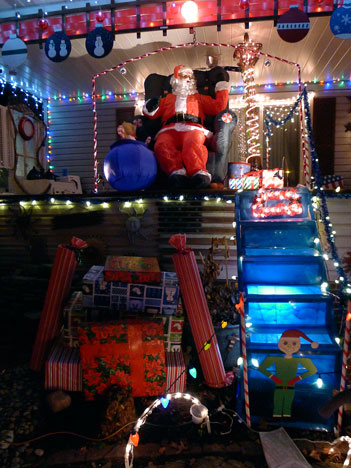 WOW, that santa sure knows how to build anticipation. 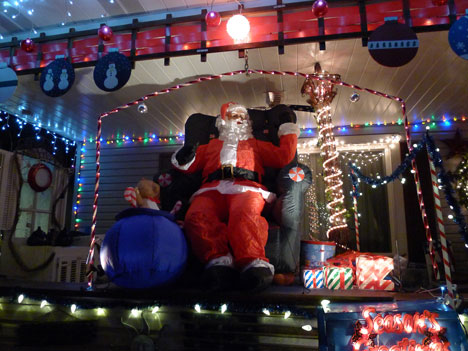 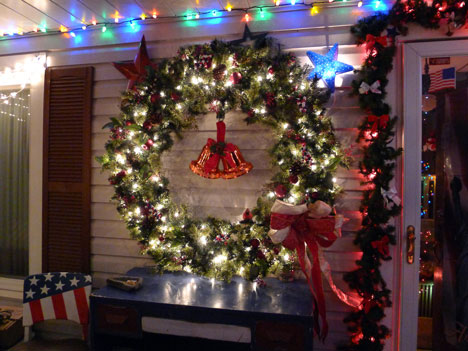 further up on the porch, a huge wreath and lots of lights make the outdoor sitting area feel like a stage. the kids just love it.

there is something to look at in every direction—no space is left unfilled or unlit. 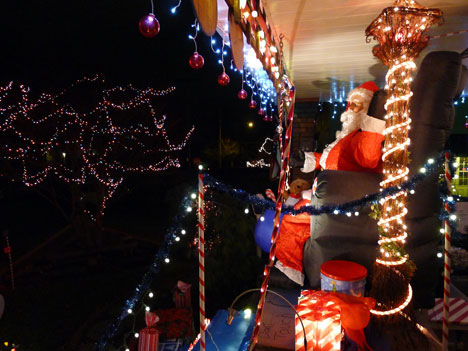 every department store santa should be so lucky . . . 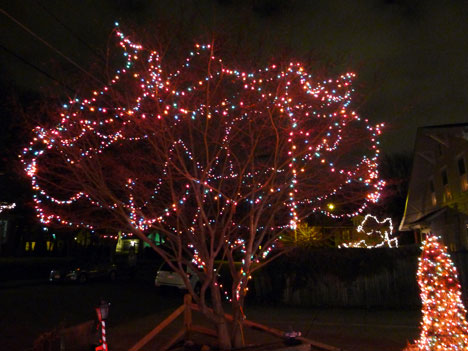 looking out over the yard from his perch, santa has a bird eye view of his planet and the children who live on it—he’s watching to see who’s naughty and nice! 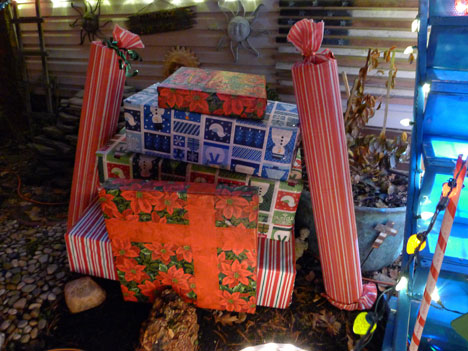 i hope you’ve enjoyed this years trip to santa’s lair; happy holidays to you and yours!