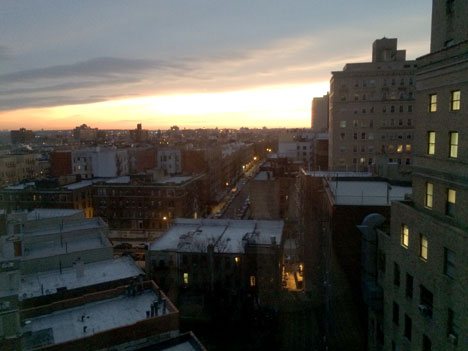 yesterday morning we woke up to a nearly identical view of the the previous day’s sunrise—gorgeous orangey blue streaked sky with the sun trying to peep through. as nancy and i chatted over coffee though, a peachy veil gradually screened out the sun, turning in just a short while to a gray, fuzzy mantle, the fingers of which began to creep toward us through the streets and between the buildings.

is that fog i asked?? then i realized—it was the snow they’d predicted to begin at noon. and i’m not kidding when i say that it literally crawled its way across brooklyn from the east to invade every nook and cranny the city had to offer.

it was a fine, icy powder blown sideways by the wind and yet by 10 am, enough had collected to coat rooftops, standing cars, and sidewalks.

nancy and i had a special lunch date with cathy and agnes at nobu, so nothing was going to keep us indoors—neither of us had ever been there and we were excited to go. so we worked for a few hours in the early morning and then pulled on our boots to brave the weather. just then, i got a text that my flight the next morning was already cancelled. i quickly rescheduled (thank goodness we were still indoors!) and out the door we went.

this is where NYC really has the advantage; no matter what the weather, you can travel underground by subway to get wherever you want to go—and quickly. the subway hardly ever shuts down; it’s truly the eight wonder. 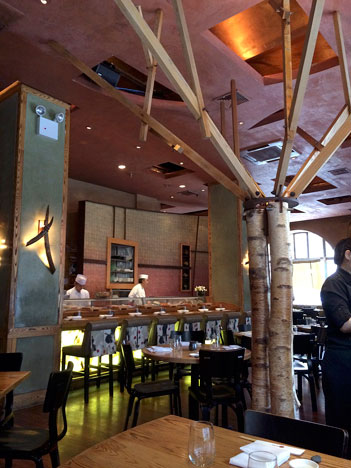 we arrived at nobu just at noon and were immediately transported from the outside hustle bustle to a serene interior—hushed, but not too much so. it still felt very relaxed, cordial, and welcoming; the staff couldn’t have been more naturally nice. 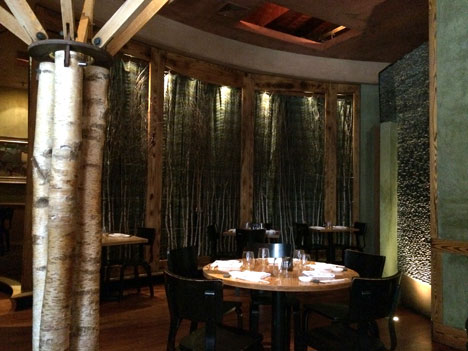 i love the design inside, using all natural materials but not trying to recreate the outdoors exactly; more like what i’d see in a dream about the outdoors. 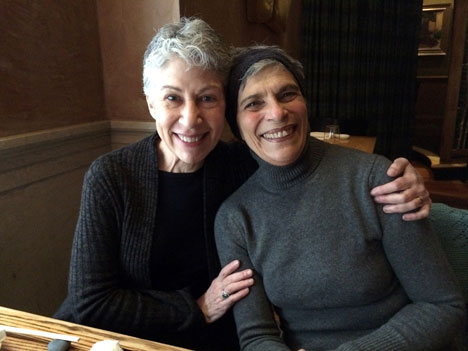 don’t cathy and nancy look stunning? and they are just this beautiful, inside and out. we were soon joined by agnes who missed getting in the photo, unfortunately.


soon the parade of food began and we were treated to one vision after another of tasty dishes which arrived at our table as beautifully arranged presentations (that sashimi was particularly gorgeous and delectable; i could eat that all day, i’m not kidding).

outside our window, the snow just piled up and pedestrian traffic thinned to a trickle. i began to rethink the afternoon i’d planned, moseying around downtown to poke around in some galleries and maybe a shop or two (we were dangerously close to century 21). 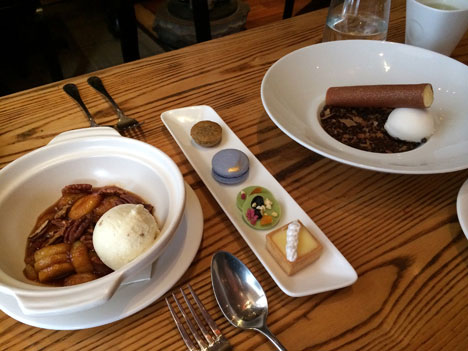 and at the end, the kitchen sent a lovely trio of desserts, which of course brought our friend kimkimkim to mind, knowing how much she’d approve.

this dish of bananas sautéed in some sort of whiskey sauce with toasted pecans and ice cream?? stop it.

oh what a meal—seriously, i enjoyed every morsel. i could eat this kind of food every day.

soon we realized that we all better get moving if we were going to get to our respective destinations. once outside, it was clear that the snow was getting more serious; i decided to forego my afternoon out and head back to brooklyn to knit a hat and watch the snow fly from nancy’s cozy sofa. 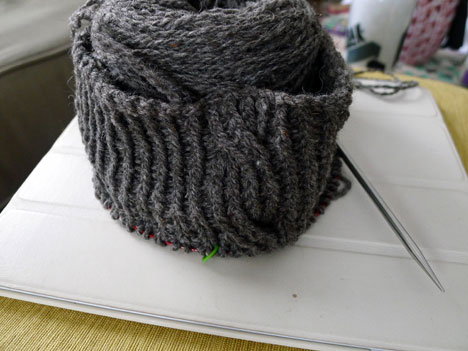 one of the project i’d packed for this trip was the waffle creams hat i started with such great enthusiasm during the polar vortex, only to be sidelined when nan and the boys went home and my january chapter deadline drew near (hey, this is what happens; what can i do?).

well, what i can do, since everything is on the needles and set to go, is pack these sorts of projects in my travel bag and get on top of them during my trips. which is exactly what i did. while nancy was gone, i made myself at home on the sofa facing out the glass wall to watch the snow, played my current audiobook on my phone (i’m working my way through the series),  and settled in with my snuggly hat project. 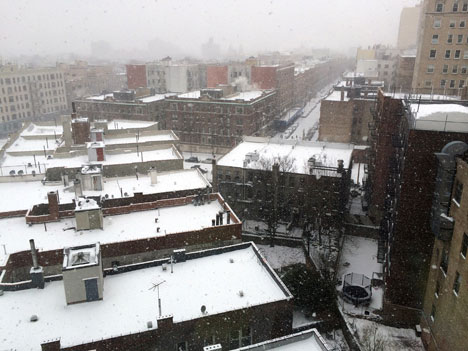 here is the last photo i was able to take before it got dark. the snow was so fine and the wind blew it about so, that even i was fooled—it didn’t look like much. but you can see at the top of that dark red building on the right, it is piling up pretty high against the fence.

for the next four or so hours it was full steam ahead on this hat. i’m knitting with our stone soup DK in the slate shade; we had a large ball of it in the leftovers bag that i grabbed and it was plenty to make this generous slouchy cap, so i think it’s safe to say that nearly any size can be knit from a full skein. i got almost all the way through it before my eyes started to close and finally had to put it down just before closing the top.

before climbing into bed, i also noticed that the snow had stopped, seemingly mid-gale. one minute it was blowing around to beat the band and the next, the sky was clear. amazing.

at 7 am this morning the sky was streaked with soft blue and white and the sun was just peeking over the horizon. everything was stillness and light, so pretty. we heard that over a foot fell in central park and a bit more in the surrounding areas. 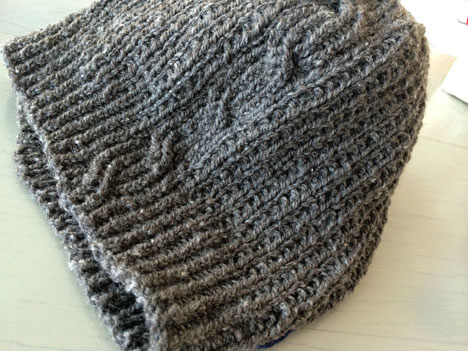 i finished off my hat over coffee this morning, mmm. the fabric has a wonderfully touchable surface with the feeling of soft felt. and it’s not even washed yet; i know it will be even more cozy once it’s had a hot soapy bath. 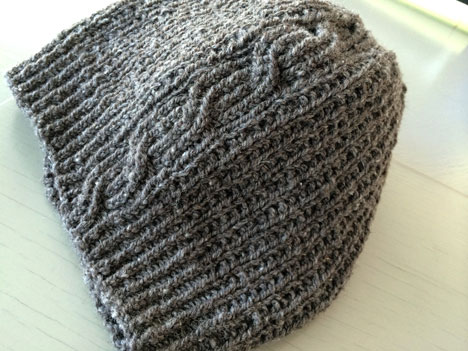 for all its softness though, the stitch definition is terrific; again, it will improve once it’s had a bath and the stitches find their final resting position within the fabric.

the design is based on my waffle creams socks, a combination of patterns that i’ve always had an affinity for—they exude a warm, “grandpa” feeling that i can’t resist (and which i take at face value will refrain from analyzing too deeply, haha).

in fact, the sock design comes from the memory of an actual “grandpa” sweater i used to own, which i found in a thrift store during the 1980s. i loved that thing dearly, but i lost it while traveling one christmas, to my great distress. one of the designs on my long to-do list is to replicate that sweater and now i have the perfect yarn with which to do it.

for part of last evening i also worked on my other current public knitting project (i have a couple of secret ones going, too). 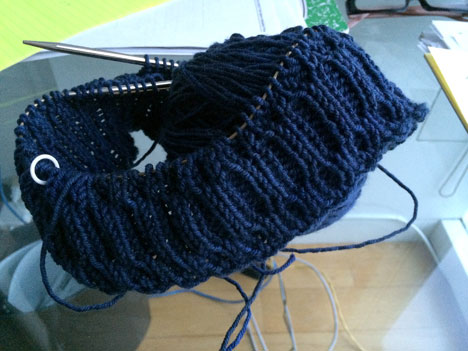 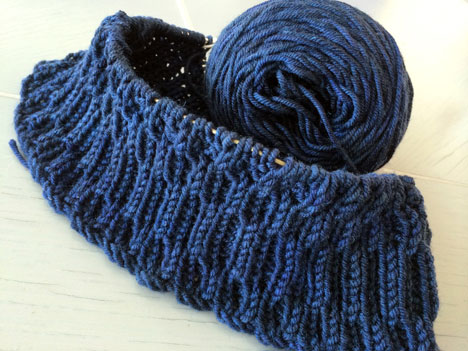 i’m using a combination of stitch pattern and yarn weight to play around with changes in scale—kind of like op art painting. it’s a long story, but i’ve always been fascinated with that genre, even though i never attempted to use that style in my own painting endeavors.

this series of yarn has a beautiful sheen from the silk content and the twist, which leans toward a firm structure. i also have some in the vavavoom colorway; karolyn will be test knitting some of these new pieces with that color along with me. right now, i’m thinking about arm warmers, cowl, and a couple of other, multi use items.

and they will coordinate really well with my existing lacunae design for fingerless mitts and hat (my favorite, most-worn mitts). i’m excited.

and just look at this beautiful sky now—who would even guess at the craziness that was yesterday if we didn’t have twelve inches of snow to prove it?

and with that, i must close—time to organize my suitcase, grab a shower, and maybe a quick walk before i head to the airport.

hehe, i just looked at the forecast for home; i’ll give you three guesses what we’re going to get later today in ohio, but i bet you’ll only need one . . .

17 thoughts on “the difference a day makes”