Ooooh, that big square shawl is so pretty. How much does it weigh? Can you show another nice drapey photo please?!? Do you think you’ll wear it, or will you mostly snuggle under it while watching TV, or on a plane (or both)? 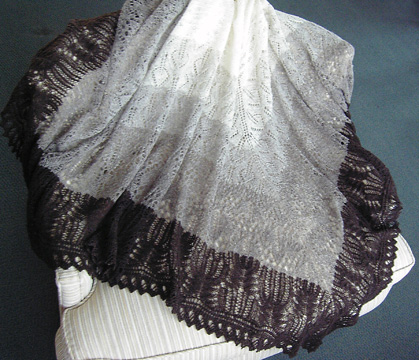 the big shawl is probably going to go to one of my nieces, sarah; i’m trying to make something really nice for each of them, to give on some future special day . . . i wish i was going somewhere on a plane, like france or italy!! but no. i used about twelve 1-ounce balls of morehouse merino laceweight yarn, maybe thirteen, so that’s how much it weighs; it’s very light!

once i started digging around in there, i actually found quite a few things which i liked, but which have one thing going against them; they are white. i probably got some of them on sale, or they are handspun, and then there is a bunch of white sock yarn i’ve been avoiding. white just bores me; i love the idea of it, but knitting with it is a big yawn. the exception being aran knitting of course, where there is plenty going on to hold my interest.

i gathered it all up and brought it to the cellar to soak. after a couple of hours, i got my dyes out and started. i use the (kitchen safe) country classic dyes we sell at the shop. you mix them with boiling water and a bit of white vinegar, then paint your wool. i lay down plastic on the counter and start out “painting” but usually end up pouring dye onto the wool.

into a container it goes, and then microwave (or bake, or use the stovetop) til the dye takes up; it’s done when the water is clear, or nearly so. if using pure wool, you need to watch the cooking so as not to felt your yarn or fiber. here we have the jaeger MM dyed with blues and greens. it’s a superwash wool, so felting is not a danger.

i let them cool for quite a while after the cooking; wool stays very hot for a long time. i kept them covered for a bit, then uncovered. the extra steaming time seemed to help the last of the dye go into the wool. here, you can see that the rinse water has no bleed-out.

normally i am not a purple fan, but i love it next to the brown in this hank.
here’s what i ended up with (wet)

the rose one all the way to the left is the same yarn in the first two pictures; not as “stripey” as it looked after painting, but there is some variation in it.

and hung to dry.

the sun isn’t very good today, so i had to use the flash, and the camera is picking up a little more splotchiness than there actually is. and some of them are not splotchy at all; i wonder why? usually i do more fiber dyeing than yarn dyeing, so any unevenness isn’t such a worry. when it gets spun, it all smooths out. hopefully, this will knit up pretty, too.

for an example of fiber-dyed handspun, go see persnickety’s prize. i am SO glad she likes it!

3 thoughts on “dyeing for something special”