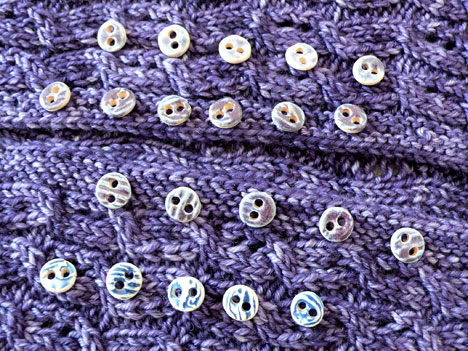 now that i’ve mostly unpacked from the weekend trip (still have to put away the pieces from the trunk show, oy), opened the mail that came, and answered most of the weekend email, i’m trying now to prioritize my works in progress—not the easiest job on the list; i have too many things on the needles, or somewhat complete, but needing revision.

one project i can finalize now is my henley sweater—as you see, the buttons arrived from jennie the potter and they are beautiful. now i just have to decide which ones look best—they each have different qualities. i think the lighter ones (top row and bottom row) can be saved for another project. the two middle sets are the most similar and the best match for the fabric, so it will be one of those. they are very close—i think one might be a bit bluer than the other and that will probably be the final choice. hopefully, i’ll have those sewn on by tonight. 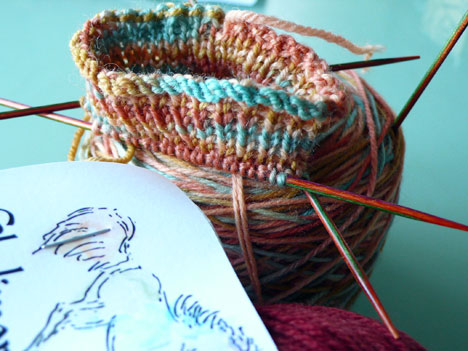 i’ve had some time to knit and catch up with pattern writing (oh yeah, that!) since i got back. i have a not-so-little backlog of patterns to pull together, both for secret knitting and for public projects. there is nothing i love more than immersing myself in working out a pattern—i love the feeling of being so focused, figuring out the best way to put the parts together and choosing the language that works best, then working with ronnie and tana to perfect it.
it’s impossible to get enough of it done when i’m on the road, though. so now i have a queue. haha, i might have to retreat to my attic to get caught up.

and i know that as soon as i do, there are a few submissions and new things i need to think about and work on right away. gotta keep moving . . .

monday, i hit the ground running and managed to get through half of my email pile and do a blog post before i met with my knitting class in the afternoon. there were lots of new FOs to share (i’m not sure what was going on with my camera, but the following pics just aren’t the greatest, feh): 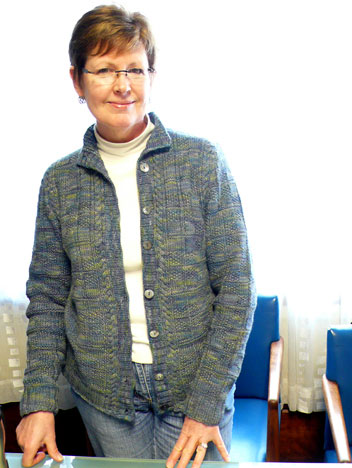 anne C finished her highlander sweater (size medium, no mods), knit up in briar rose wistful, a colorway close to 313—it is to DIE for, so soft and pretty. and she is thrilled with it (so are we). 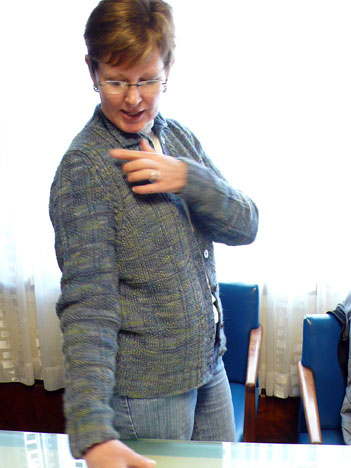 she put lots of work into swatching and checked her gauge carefully once she got going and you can see that the result is a beautiful fit, which she is happy to point out to us. 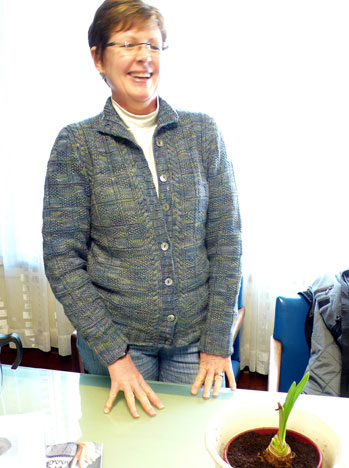 janet (who really needs to get some pictures up on her ravelry page!!) also showed up with a finished jackie jacket, sans pockets—she worked on applying those in class and hopefully, we’ll get to see the final-final sweater next monday. 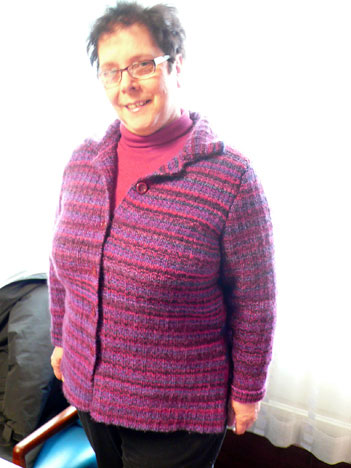 (we had a lot of trouble getting a good photo of this one, i’m afraid; it looks much prettier in person).
i was hoping to find out what yarn janet used from her ravelry page (it was a commercial brand, but i can’t remember which), however, keeping her project page up to date isn’t a high priority. janet, you can text now and everything—there’s no excuse for that, haha. (we tease each other a lot in that class)

oooh, ooh, i keep meaning to mention that david finally joined ravelry a few weeks ago—wouldn’t it be hilarious if he was bombarded with “friend” requests out of the blue? (i think i might be his only friend at the moment). while we’re at it, we should pressure him to put up a ravatar and a photo of his one completed knitting project. just sayin’
(he did join the knitspot group)

debbie s brought a finished project too, just to let everyone know she’s right there with them, makin’ sweaters 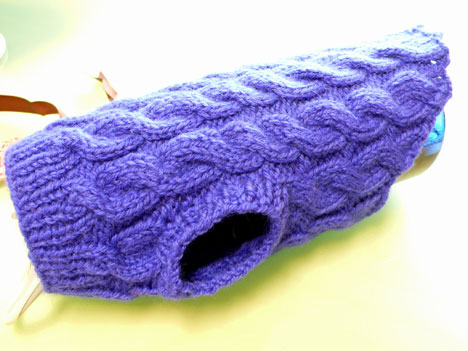 ok, it’s a dog sweater, but it’s nice, right? and it fits that 2-liter water bottle like it was made for it. i think it’s adorable and i bet the recipient (who lives in north carolina) will like it a whole bunch—we still have to get through february . . .

i worked on a secret project during class that is nearly done. i’m at the end of my yarn though, and waiting for another skein from the dyer.
i have two other SPs on the needles that i’m working away on—they are small, but time-consuming. one is almost done and i’m very pleased with it. the other took a little time to get the design just right, but now it should go quickly.

meanwhile, i started a couple of socks that i CAN show you—these are both projects that i’m aiming to release during the last two weeks of february, to celebrate events that the dyers are participating in. 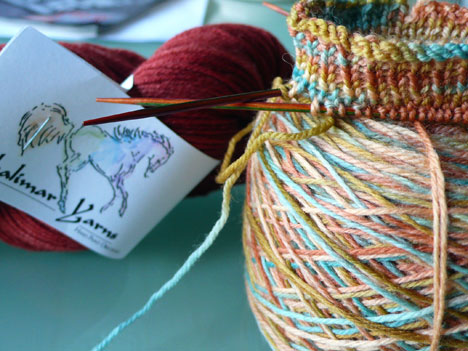 the first is a fun, easy-to-knit/easy-to-wear sock in a knit/purl pattern that resembles thermal fabric—longjohn socks, if you will. this will be a great traveling project because the pattern can be memorized almost instantly.

i’m knitting this up in two colors of david’s new favorite sock yarn, shalimar yarns zoe—catalina and cayenne. the catalina multi is a skein i’ve had for over a year, just waiting for the right project to come along and i’ve always loved the cheery colors in it.

then i’m knitting a pair for david in cayenne, because well, every guy needs a pair of red longjohns, right?

i gave him a pair of holidazed socks knit in zoe (colorway newsprint), for our anniversary in november and he’s mentioned several times that these are his favorites

he loves the feel of the yarn. and it is really yummy—plump, but not too much; still soft and pliable and easy to work on the needles, with great stitch definition.

the new longjohn socks will be released just prior to the indie artist celebration, organized by kristi and paul at eleganza yarns (kristi is also the dyer of shalimar yarns), taking place in frederick, MD on feb 20th. i will be bringing a trunk show (as well as david, haha) and teaching classes during the event and the following day; click here for more information and signups. this promises to be a lively event with vendors, demos, door prizes and more—if you are local to the area, mark your calendar and plan to attend.

now that i have these on the needles, they can go anywhere with me and i’ll get them done quickly, working a few rows at a time.

i also finally managed to settle on a design for the woolen rabbit kashmir yarn i have in the hanky panky colorway.

i had it on the needles last week and became disillusioned with my original design idea once i got into the body of the sock. drat
i’ve been poring over stitch dictionaries ever since, looking for some new inspiration. i did like the way the cuff of that first one looked, with its twisted ribs and little mock cables. 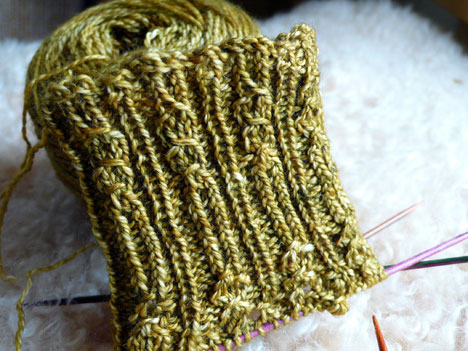 the silky sheen of the yarn and the depth of its color are shown to great advantage here, i think. so i ripped that first draft out and concentrated on looking at textures that are a little more exaggerated—since the yarn is pretty fine and has a relaxed twist, it can be knit in a heavily-textured pattern without feeling bulky. 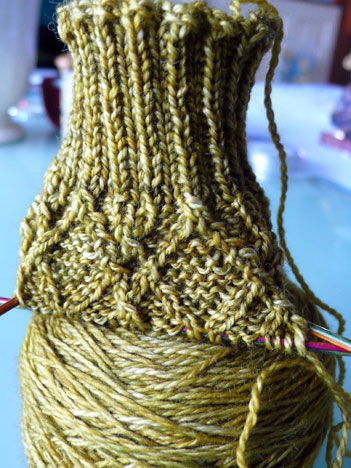 i finally settled on a twisted stitch pattern i like, one that has larger-scale intertwined shapes i can use at the top of the sock. i’ll repeat a smaller segment of this pattern down the leg and over the foot. i think the only improvement i need to make now is to go down a needle size—it looks like the pattern could benefit from being knit a bit tighter; i’m still trying to decide. otherwise, this one is now officially on the needles.

kim will be having a booth at SPA again this year, during the weekend of february 27 and 28 in freeport maine, and will be offering this design as a kit, with her gorgeous kashmir yarn. look ofr her at the retreat.

i now officially am overrun with sock projects, heh. i have five on the needles right now, not counting all the second socks i started before the holidays (i think there are 4 or 5 of those, too) and haven’t completed (and i never do that—it’s really unusual for me to have second socks languishing around. we need those . . .)

once i get caught up, i’m taking a vacation from socks.

i still have to restart the hat i showed you the other day and finish the coordinating neckwarmer—both projects are in exactly the same spot they were the last time you saw them, sigh. i’m hoping to get to my knitting chair a little earlier this evening and fix that situation (fingers crossed). 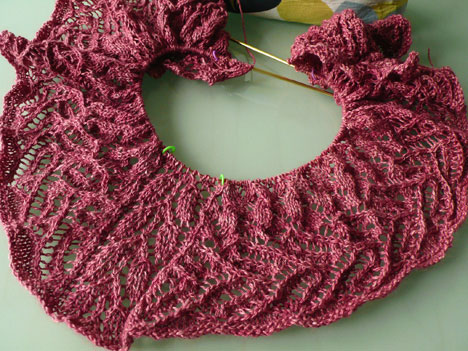 my little rose shawl is also waiting patiently for me to spend some quality time with and you’ll be the first to know when we’ve had a chance to bond again. so far it’s going well, but i still have to have my chart handy as i work to take notes and make tweaks (it’s weird stitch pattern that works completely differently on paper than it does on the needles, heh)

yesterday, i unpacked a bunch of yarn and other goodies brought to me by workshop participants over the weekend and photographed it this morning. i think though, that it will be a good idea to save that for another post, dedicated to yarn goods—it’s time for me to get some other work done so i can, indeed, make knitting progress this evening.

25 thoughts on “getting my ducks in a row”