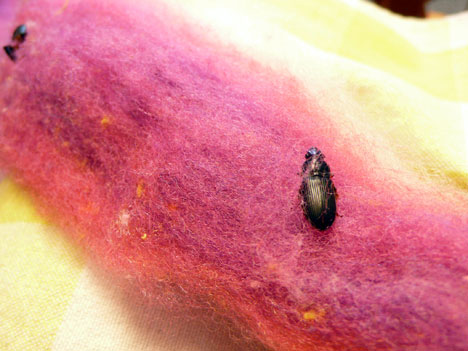 while we were hoping that maybe there was a good explanation for the presence of these guys in linda’s spinning fiber (like maybe they were cochineal bugs or something), turns out—no. just a couple of grain beetles who thought that the presence of a little hayseed constituted a drive-in fast food joint. they stopped in for a meal and ended up getting their gooses cooked, heh.

i think there was one moment of squeamishness on linda’s part, but she got over it and passed the roving around so we could all get a closer look. that’s what passes for local interest when we get together to spin on sunday. 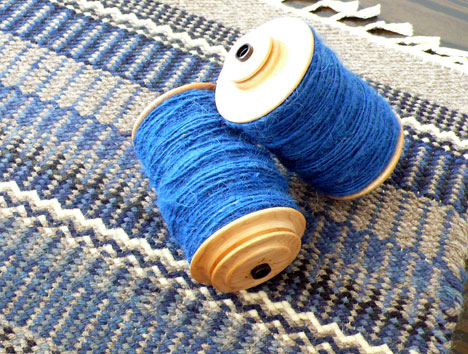 i changed things up today for myself, spinning with fiber of a completely different character than i have in recent months—i was ready for something fast and dirty after all that lace yarn i made in the second half of 2009.

i bought this blue border leicester fiber at rhinebeck in october in the same booth where i purchased my beautiful blue patterned rug from marilyn magnus. i’m spinning a chunky yarn that will become part of a project for the guest room where we are using the rug. i had 10 ounces of fiber and have spun almost all of it already—next week i’ll ply that up and start on the complementary brown/black shetland wool that also needs to be spun for the project (i have a big batch of chunky gray wool already spun, too). 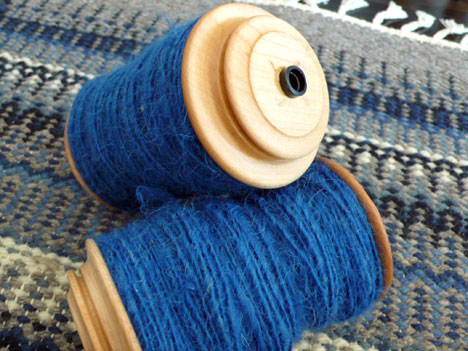 the dye color of this fiber is gorgeous—rich, intense, but not bright; it’s really nice and matches some color or other in that rug, just perfectly. i can’t wait to get everything spun so i can get going on the project.

you never know, this could end up being my olympics project—it would be a good traveler. part of my reluctance to commit to a big olympics project is that i’ll be traveling almost the entire time the games are on, and i’m worried i won’t have enough consistent knitting time. 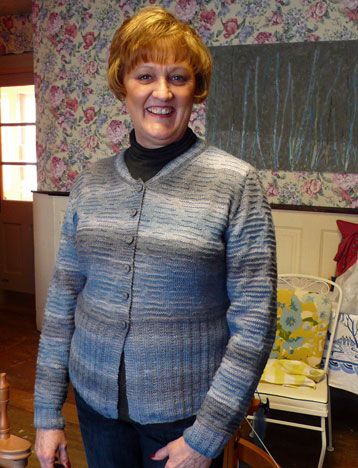 we all know barb is an overachiever, but can you believe she finished another sweater already?? this is her third ondule, knit this time in skacel noblesse, a merino/silk blend (colorway slate). just look how she’s matched those stripes.

she noticed though, that in the merino/silk blend, the sweater fabric is more relaxed and fits a little looser; if she had known ahead of time, she would have made the shoulders a bit narrower.

to be honest, she had started this before christmas, but put it aside to knit a few other sweaters, but still . . . not only that, she’s already got the sleeves knit for her third aztec mazes sweater, a sample she’s knitting for the briar rose upcoming show season.

i thinks she’s knitting like a demon now because she is about to get very busy with her plant business—dragonfly aquatics—in spring, her store is her main priority (her blog is awesome, too) and knitting is almost out of the question between march and july. she has to burn through whatever she really wants to finish now. 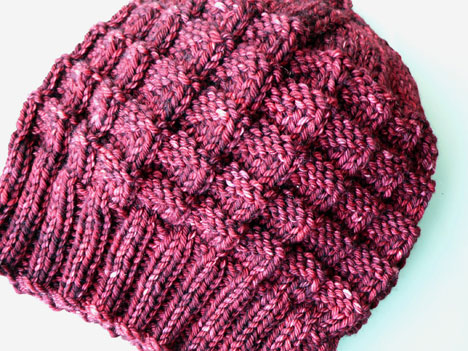 i’ve been knitting up a storm myself, but there is very little i can show you, wail. yesterday i went to visit with susie and debby and reknit most of the high peaks hat while i was there. the first one would have fit the recipient just fine, but maybe crushed her hair more than she would like.

i wanted to keep the earband the same tightness, but loosen up the top part a little, so here’s what i did: i cast on the next size up and knit the earband on a smaller needle than the pattern says, to keep it tight and dense against the wind (so, three sizes smaller than the body needle). then i knit the top part as usual. presto—a warmer hat for someone with fluffy hair.

the sundara merino worsted in colorway crushed cherries is delish—cozy and lightweight with color you could, indeed, eat with a spoon.

i finished that up last night (i had to cannibalize the first hat, sadly, to complete this one), then i finished off the coordinating neckwarmer. the neckwarmer is also dense, but not as heavy as the hat—it’s knit in briar rose fourth of july (leftovers from jackie, in colorway black cherries)—more of a light worsted or DK weight. 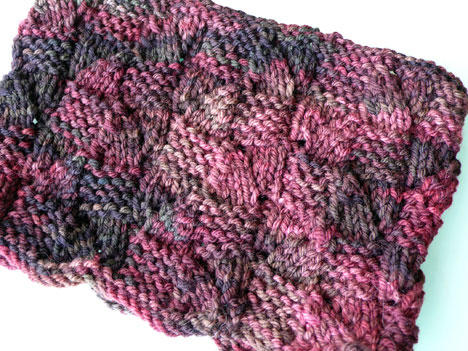 i love the way the two piece work together, even though they don’t match. i have some FOJ left over that i’m trying to squeeze a pair of mitts out of—not sure if i can do it, but we’ll see.

other than that, it’s all secret knitting for me—i did put a couple of inches onto the longjohn socks while going to appointments on friday, but i’m holding off on showing those until there is a little more body fabric to show.

i feel like i’m going to crack from all the hidden knitting i want to show you. frustrating to say the least, but, i guess it makes us stronger, right?

10 thoughts on “buggin’ out on spinning”