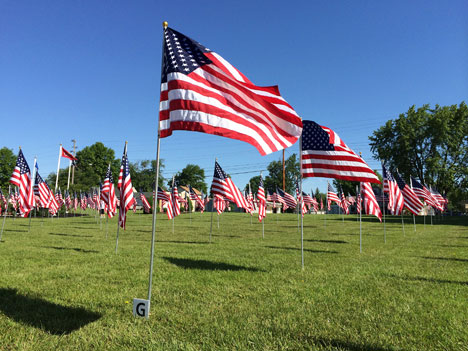 oh what a perfect weekend!

i can’t even count how many times i heard that sentence over the past few days—and perfect it was, from beginning to end. to start, the weather here in northeast ohio was absolutely sublime–mid 70s to low 80s with clear skies; the days were warm with cool breezes wafting regularly through and the evenings were restfully refreshing.

then there was the fun of the great lakes fiber show (wooster), which was a huge success for bare naked wools, thanks to all of our loyal followers who came out to browse, chat, and purchase yummy yarn at our popup shop. honestly, there really aren’t words for the kindness and generosity shown to us over and over at these events. we want everyone to enjoy their visits to our booths; we do our best to make each show a unique and special experience. it feels so nice to get feedback telling us that we’re on the right track. thank you!

david and i haven’t been taking vacations for a lot of years now, so we try to make mini “rest stops” out of national holidays, using that time when we have the house to ourselves for a quiet day of puttering or just wasting time. for him this might mean a good long sleep well into the afternoon (as you know, he’s always awake at least til dawn, usually later).

no matter how late i went to bed, for me it means getting up early to maximize the fun i’ve been dreaming about and planning, haha. this memorial day started with a nice breakfast with my friend anne marie before she took off for home. 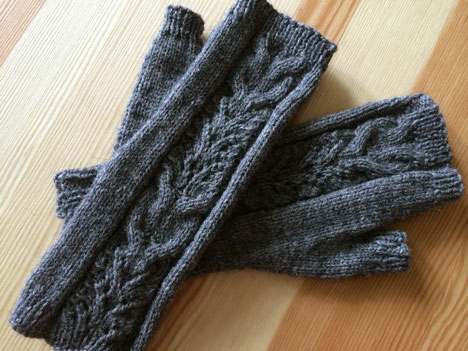 we had a wonderful weekend together; despite the activity around the booth operation, we were home early enough each night to spend several hours knitting and chatting before bed. i completed my wheaten mitts to match the hat that i finished last week. 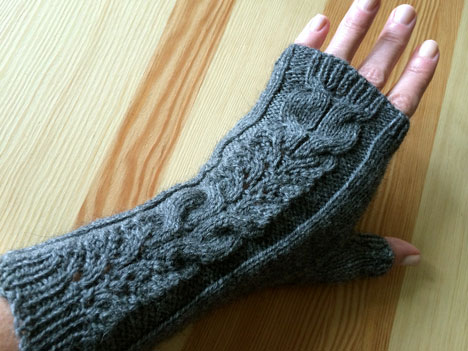 while i put the finishing touches on the second mitt, we lingered over coffee, fruit, and toast, having a last chat. we really miss each other’s company since anne marie moved away a few years back.

once she was on the road home, i jumped into shorts and tank top to get ready for the 5K race i’d signed up for that morning. just as i positioned my sweatband, my ride pulled up outside. 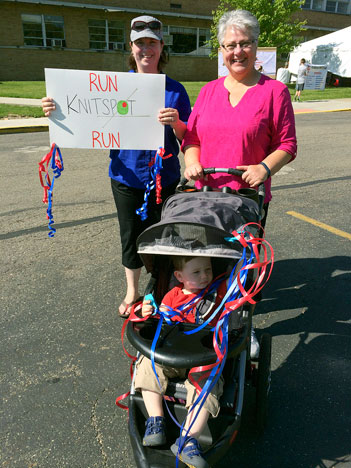 i grabbed cold water and off we went to the races. erica, candy, and padraig came prepared; what a hoot! i couldn’t help but be impressed and flattered; what a nice effort they made to cheer me on. it wasn’t my best day for running, however, but it was  fun event. 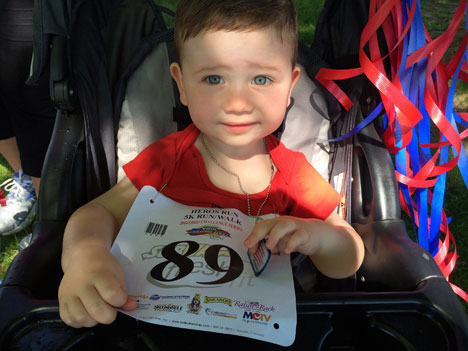 somebody got a medal and my race number for hanging in there til i came in. 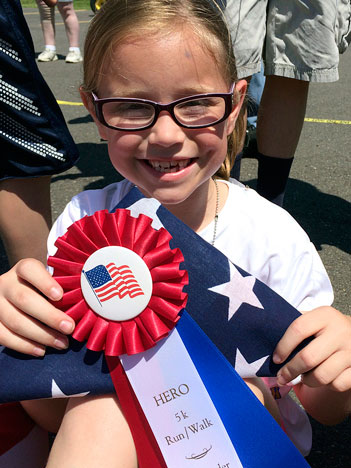 and look—my friend roxy got a first place prize in her age group; good job roxy!

and i don’t know who this boy is but he was chatting me up big time about his race—he was certain he got first place in his age group and he was right. he was extremely proud to be photographed for the blog, haha. i hope he keeps running; he has the confidence and talent to be really good at it.

what a fun morning—it was hot in the sun but cool in the shade; the best kind of weather for such an outing. afterward we all piled in the car and headed to a canton landmark for lunch—taggarts ice cream parlor.

somebody was a little worn out, even for fried food, but he perked up when his sloppy joe came out and ate well after all. we of course all saved room for ice cream desserts (i’m a huge fan of coffee and vanilla); erica got the bittner sundae, which is a taggart’s trademark creation and super yummy.

after lunch they dropped me off back at home with plans to meet up later for knitting. i wanted to get out into my garden to do some planting but the afternoon sun was a little strong, so i settled on a nap instead.

when i woke up, i put on my gardening clothes and headed outdoors, where david had been busy mounding the tilled garden into rows. he wanted to try a new system this year for better drainage, one that several of our friends recommended. all the compost he’d placed over the garden had been sitting for a while, so he rented a tiller over the weekend and turned it all under. then on on day, he made tall—sixteen to eighteen inches—mounds for planting. 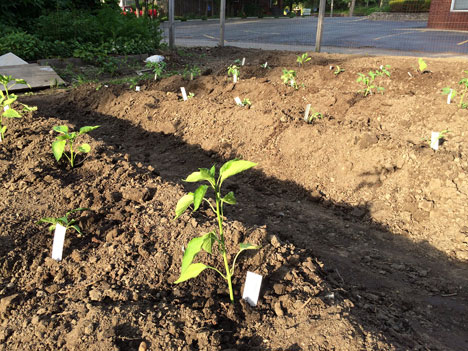 some are wider for sowing seeds and less bushy plants a couple of rows apart or in patches. two rows are narrower for planting a single row of tomatoes in each; he plans to erect trellises along these so the tomatoes can grow up and across, rather than staying to close to the ground, where disease and insects can invade leaves from damp, splashing soil.

i had to go on a scavenger hunt in the basement and garage to locate my gardening tools, which were put away in scattered locations during the renovation last summer. once i had what  needed, i managed to get all the eggplant, tomato, and pepper plants in the ground. 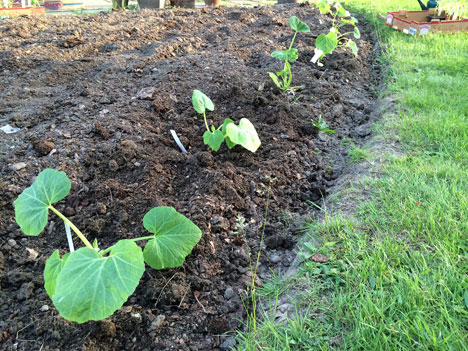 then, across the walk on the front edge of the smaller garden area, i put in all the squashes and marigolds we had. this will isolate the squashes from the nightshades so that if the squash gets invaded with bugs (a constant challenge in our area), they won’t be near the other plants. i also like this location because i’ve noticed that the squash plants always crawl in a westerly direction as they grow and vine out. this placement will allow them the freedom to do that without crowding other plants—another constant issue for surrounding plants. i love the squash but when they do survive, they take over and choke everything around them.

by then it was getting dark and the mosquitoes were coming out, so i watered everything and packed up my tools to take indoors. the garden was pretty dry anyway; we were expecting rain on tuesday and i thought it would be better to sow seeds after the ground had a good soaking—that way, the seeds would be happier and part of my job would be done for me.

i cleaned up and went over to sarah’s house, where erica was staying with her family. we all watched an old movie i hadn’t seen before (and enjoyed greatly; you can’t go wrong EVER with a robert downey, jr. film) and some of us even knitted as we’d planned, haha. 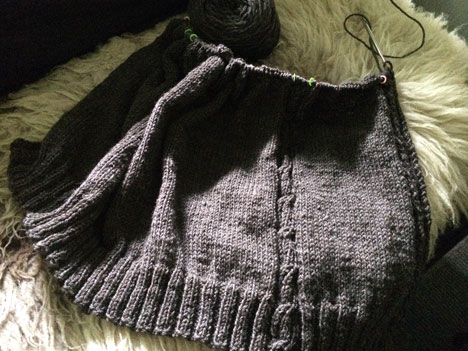 i put one more repeat on my pedal pusher cardigan that i’m designing with our confection worsted in the dark chocolate color. this is such a nice, smooth knitting yarn and so cushy—in fact, we love it so much that we are talking to our mill about spinning it up in a lighter weight as well. even though we just got done with cold weather around here, i will be looking forward to fall when it’ll be chilly enough to wear this. i’ll have a brand new sweater all set to wear on that first cold day and a new yarn to knit with as well!

when i got home, david and i watched TV until late while i worked some more on my sweater. he did not knit because his squish me hat is done—and i have been totally forgetting that he’s patiently waiting for me to show him how to close the top.

tonight, i promise. then he can wash it, block it, and put it away for next fall. he did a great job using double pointed needles for the first time—i know it was a little weird for him at first; he forgot to use the spare needle once or twice, but that was easily corrected and he was soon on the right track. david takes direction very well, especially while working on a project where it can be applied immediately.

i’m thinking he will want to start something new right away, probably in cotton for summer this time (i’m itching to knit with cotton myself lately, aren’t you?). a light hat would be good, like a slouch potato or peu bourgeons. i have to get out the cotton yarns and let him pick something.

erica stayed in town through yesterday afternoon so we could have a longer company meeting to discuss our retail popups and wholesale program (that’s right; we are starting to do some wholesale and making a list of shops we’d love to work with).

the postman pulled up right in the middle of the meeting in a van filled with boxes for us—several shipments of yarn arrived all at once. the breakfast blend DK we’ve had on order since last fall is now back in stock and we can now offer the flapjack color in that weight as well (david will get it listed as soon as we have counted it in and labeled it). 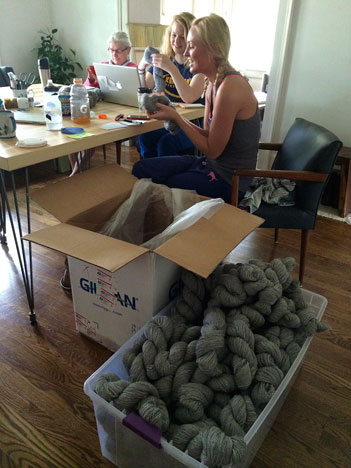 along with the breakfast blend came our shipment of a new mohair blend that we’ve been excited to see—40 percent iron gray kid mohair from pinxterbloom farm (the same producer that sold us the fiber for our chebris lace and chebris sport), blended with 40 percent fine romney wool and 20 percent tussah silk. we are calling this 2-ply sport weight yarn cabécou brilliant after a tiny goat cheese produced in aquitane. 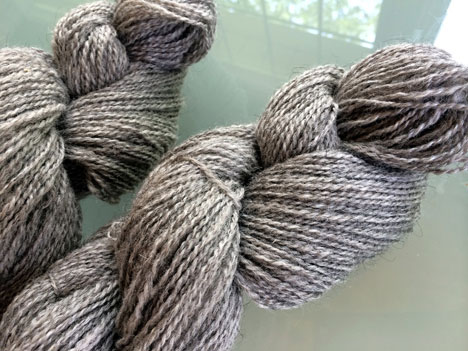 not as weighty as the chevrè worsted we produced last year, it has a lot of the same character and i think it will be and even better option for sweaters and wraps, such as stonewall, hypotenuse, gnarled oakwoods, box leaf wrap, or obstacles. and i’m sure you can think of many more.

the cabécou also has to be counted and labeled before david can list it in the shop, but we will be SURE to let you know when it’s there.

i worked on my hydrangea cowl during the meeting and also for a bit this morning over my coffee—with summer coming on, the earlier sunrise means that i’m getting up sooner and have some time each morning to knit a few rows. i think i am going to go ahead and add the edging as shown in the original pattern; i’ve been waffling about it ever since i started the piece, thinking i might leave it off in favor of a simple garter edging. but now i’m leaning toward the fancier version. at any rate, this piece should be done very soon and the updated pattern can be listed in our shops.

in other upcoming news, our friend hunter hammersen is coordinating with erica to run a summer sock KAL in our bare naked wools group on ravelry.

alright then, i think that’s all i have for today and since i have other work to do and some bicycle errands to take care of before a late-day meeting, i’m going to sign off now—see you next time. 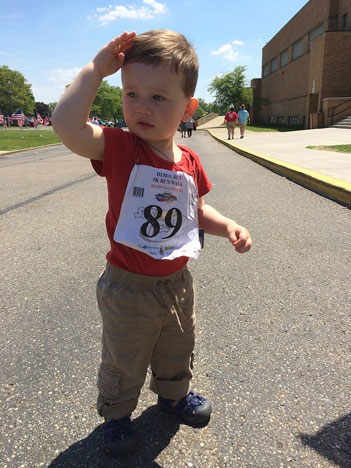 (haha, we;ve been chuckling at all the things padraig does that no one remembers showing him—like when he saluted at the flags on race day; seems he’s beginning to pick up stuff from beyond the nest.)

17 thoughts on “and now to commence with summer”