ooops, i haven’t meant to be absent for most of this week—actually, i have a bit of a technical snafu that is my own fault. in our rush to leave albany on time sunday, i left my camera’s battery charger with the spare battery in my mom’s guest room wall socket. and the battery that was in the camera was, of course, nearly out of juice.

we discovered this state of affairs yesterday when david needed the camera; he quickly got online and ordered a new set (since my mom is out of town for ten days and won’t even be able to mail the charger for some time). it should be here any day, but until then, we are relying on the iPhone camera for blogging.

in a way, it’s a good thing, since my spare battery was barely able to hold a charge and i’ve been meaning to order a new one. i’m just glad that the good battery made it home with me—losing that for any length of time would be sad.

anyway, this week has been zooming by, what with trying to catch up on rest and reorganizing my work for the month ahead. i will (blessedly) be home all through the month of march and am hoping to get a lot of work squared away. already this week, i have gotten two patterns for big projects (cable henley sweater and pine and ivy shawl) off to the test knitters. now that those are in good hands, i can concentrate on some other things.

oh, speaking of the henley, you really MUST go take a look at jocelyn’s finished sweater—she scored a total olympic gold by doing the preliminary test knit of this piece and look how sexy it is on her. she didn’t just finish in time—she finished with style; now that’s something to be proud of.

the last of my secret knitting is also complete now, which leaves my evenings free to work on my handspun pine and ivy shawl. it’s been languishing since before my trip; i packed it because i so thought i would work on it while i was away, but instead, my sock projects proved more do-able while moving around so much. 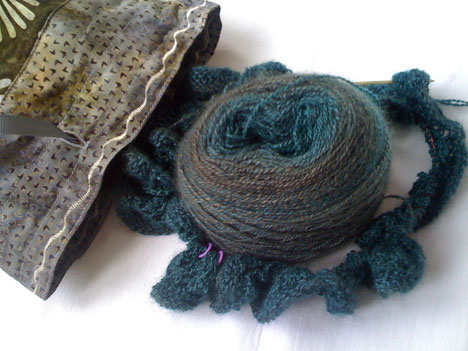 so here we are, back home and not a stitch longer than before i left. but i’m ready to dive in and get going on it now. it shouldn’t be long before you’ll see measurable results.

i also have an embarrassing pile of single socks laying around the house that need mates (especially with all that olympic sock knitting i did). the count is at: 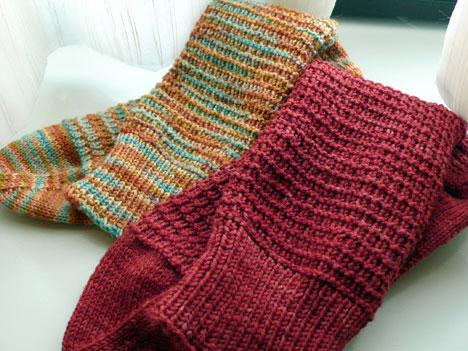 these socks make excellent take-a-long knitting, so they may not get done super-fast while i’m home. however, i have another round of trips in april and if they’re not done by the time i leave again, they will go in my bag.

one flaming desire to finish 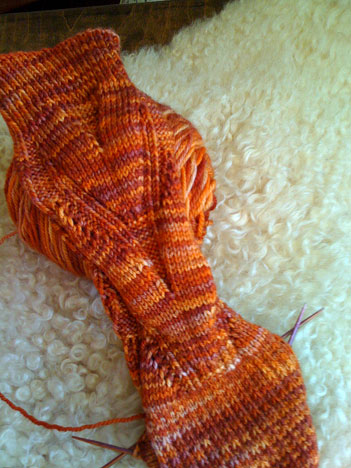 i started this second sock way back in november, as soon as i finished the first one. then i got sidetracked. it sat and sat, a mere four or five inches long, through the holidays, through january and then february, while i traveled and knit other socks. now it is time to finish it. in just two nights i have it past the heel and onto the foot; i think i could possibly finish it off by the weekend. aMAZing how fast they go when i actually knit on them . . . 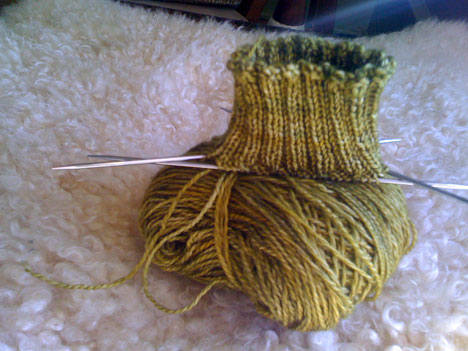 and one french quarter sock to knit as well. i got the cuff knit this afternoon during a phone call with cookie and i think that once the flaming desire is finished, this one will be queued right up after it.

now, i also have a couple of really old sock projects that lack mates and these are the ones that are most embarrassing. remember these? 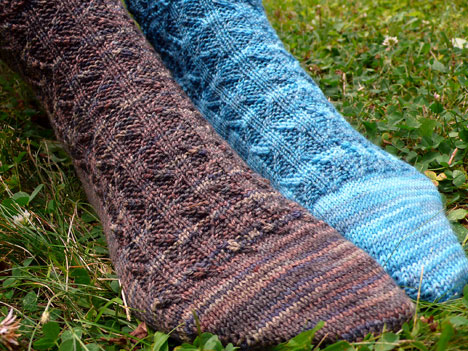 because i already knit two of them, i was a little over this design when i finished (and working on several new and enticing ones for sock summit). however, that leaves me with two socks that, at the same time, match and don’t match. i have this problem sometimes when i commit to knitting the same sock in two colors; i am “done” with them before they are technically done.

i still don’t feel especially enthusiastic about knitting the mates, but i realize that these would be excellent gifts if i did have two of each. alternatively, i could keep them and wear them as a “pair” (cookie does it . . . so that makes it ok, right?).

what would you do?

because of a lack of new photos this week, i’ve been trying to get david to write his washington post—he took loads of photos on his trip into the capitol last weekend, but hasn’t written anything about it yet. maybe you can push him . . .

i also have a special treat for you tomorrow that doesn’t involve new photos—be sure to stop back and see.