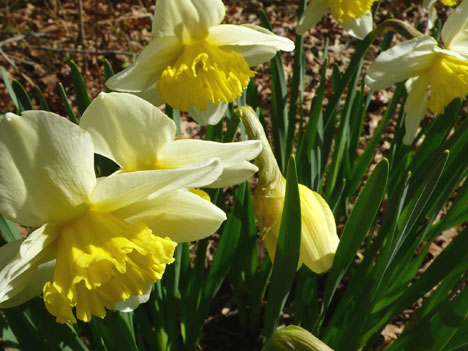 daffodils are so resilient—just look at them.
the first time i saw our daffs crumpled to the ground under a coat of april snow, i almost cried. but now i know how well they recover from a little setback like that and take cheer from their fortitude. 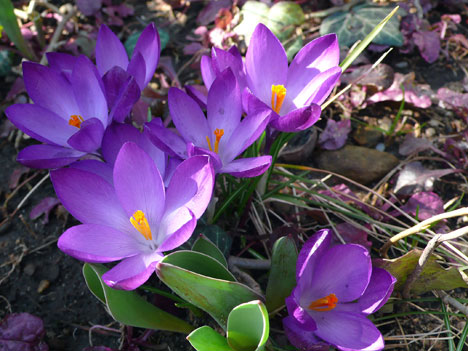 our yard continues to spring to life, despite the chill of the last few days. with the temperatures due to warm up any minute now (they are climbing toward 60 degrees as i write this), each plant is finding its way to the sun in succession. 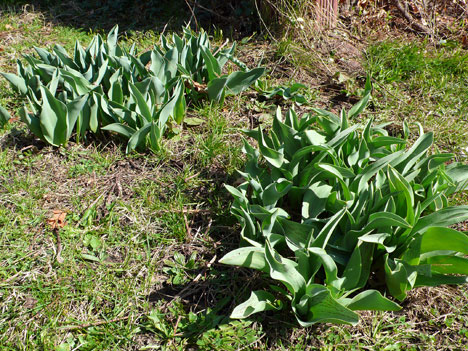 tulips dot the lawn and grow in clumps everywhere—david’s efforts to create a random carpet of them are coming to fruition after six years of planting bulbs here and there across the yard. 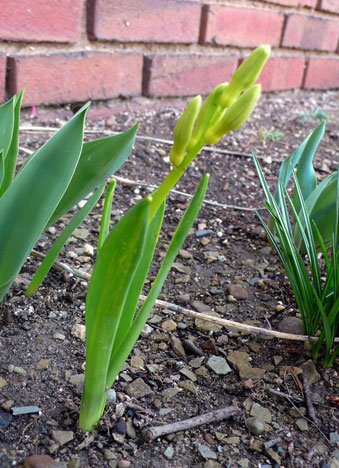 i’m hoping these are hyacinths; i mentioned to david that i like their scent and asked him to get some bulbs. i see a few of these in the front beds, but i’m not sure that’s what they are (fingers crossed, though). 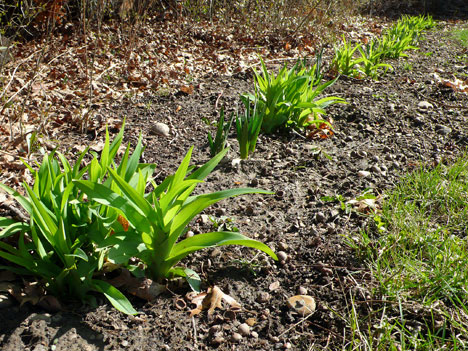 last year, the doctor across the back fence spent a day dividing and thinning his day lily beds and offered for us to take whatever we wanted from the gleanings. the row of plants we scavenged looked pretty bad most of last summer, but are growing out nice and healthy this spring; they’ll be a colorful border that i can see from my office window later this summer. 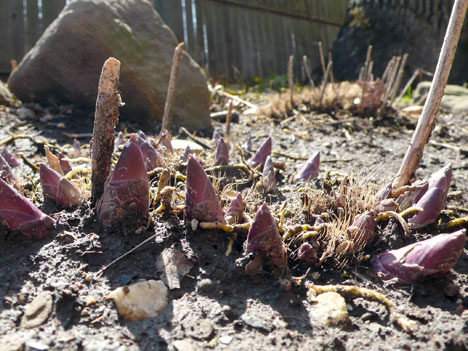 the first hostas are upright now, while others are just waking and crawling out of their beds. within the month, they will tower over that rock you see in the background and eventually obscure it completely. 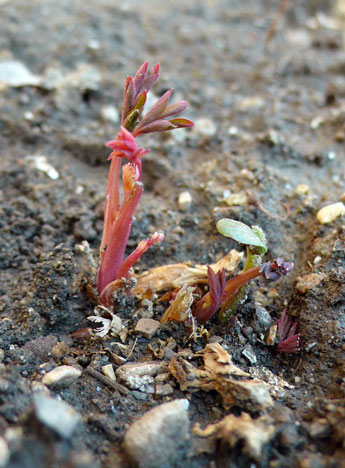 and the bleeding heart has finally made its appearance; a little later than last year, but that’s ok; i’m always happy to see it back. 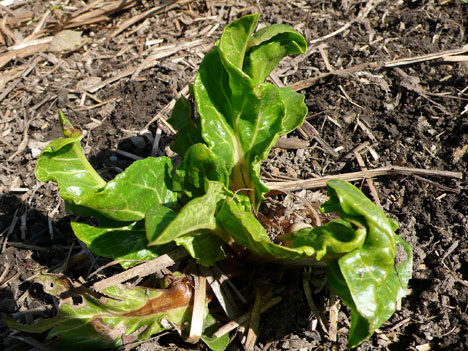 now this last one makes me chuckle—a new chard plant! there are a few of these in one of the old rows i planted last summer; they must be growing from previously ungerminated seeds that laid there all winter.

which reminds me; i really must order some seeds this week.

i wish the ground was turned up now; i’d plant some chard right away, so we could eat fresh greens in a month or so . . . david is reluctant to till it up yet; he’s afraid most of it will just go to weeds and need to be tilled again.

it’s nice that at this time of year we get to appreciate the work that went into these plants last summer and fall. gardening is really a process—even more so than knitting i think. it’s important to enjoy and learn from the work you put in at the moment—you often don’t get to see the full results of your efforts til much further down the road.

speaking of knitting and things growing

the baby blanket is becoming a size that allows me to fully take in its overall appearance and texture. to me looks visually charming, yet has an indestructible quality i can really appreciate—the fabric is squishy and dense, but still very light. 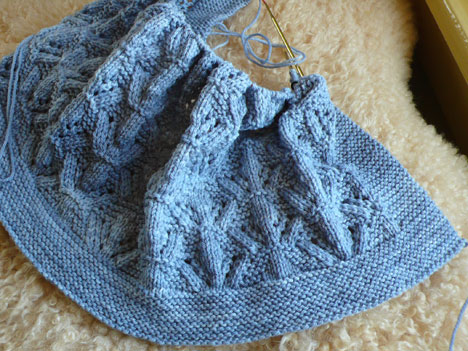 i know i sound like a broken record, but i absolutely love this classic merino sport yarn—just take a look at those crisp, flat borders and corners 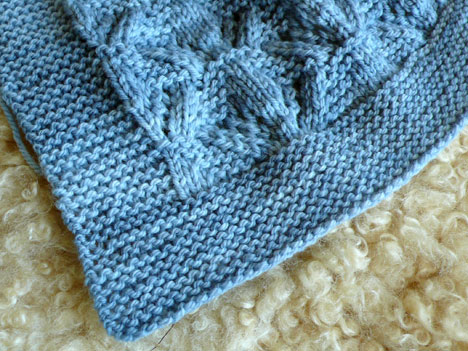 they are handsome and certain to keep their shape. and it’s all in the yarn, i swear. you should take a look at the one that catherine is test knitting in her persimmon colorway—so juicy and lively. i can’t wait to see more of that one. 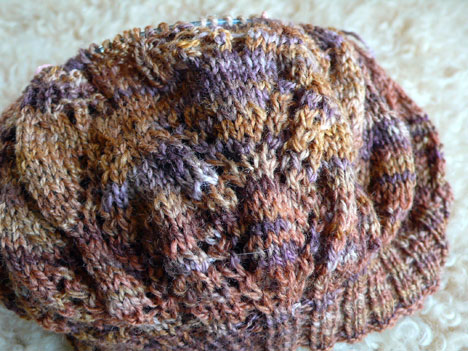 the other night after knitting class, i sat down and began my re-working of the lace beret i’m designing in miss babs yet laceweight. i think i’ve got something i like this time. i’ve worked all the way through the brim and crown sections which have a lace pattern that looks a bit like wings or leaves. 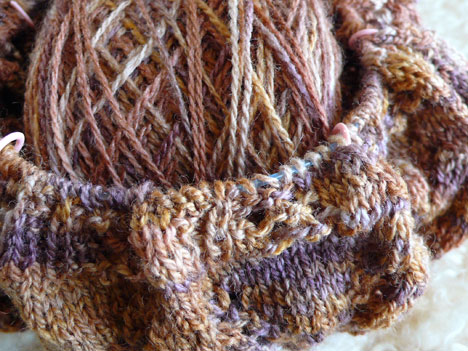 i wrapped up last evening by starting the decreases across the top of the hat; you can’t see much of what’s going on there, but isn’t the yarn pretty? i’m working with the outback colorway; it’s a little busy, but i think it works—i sure do love the brownish straw, rose, and plum mix.

it’s so hard to tell what it will actually look like once it’s off that little needle; i’m working as fast as i can, just so i can see the result, haha. i hope it’s good.

and for my late-night TV knitting, i have knit almost all the way through my first chicklets sock already—it seems to have knit itself. working with the STR mediumweight will do that for you. 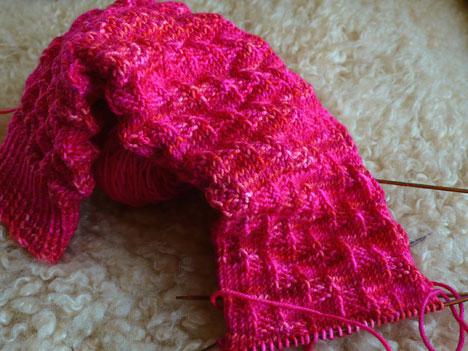 in fact, i think i’ve knit a little too far on the foot (dang!).
one of those situations where i measured and knit, then measured again and it was still the same length. so i didn’t allow myself to measure again for a while (even though i thought i should) and when i did—it was too long.

i really need to stop playing games with my knitting; i always lose.

anyhow, i’m ready to start the toe now, as soon as i rip back about twelve rows.
(heh, loser.)

still, it’s a fun, quick knit, so i don’t mind.
i’ll finish that up later tonight and put in some work on the cabled sock for a break. both of these socks are going so quickly, i hardly recognize myself.

it sure helps my productivity to have fewer projects on the needles, but it’s a struggle to contain my enthusiasm for the projects i have in my head which i want to begin right away, too. i’m trying to practice moderation (and finish some socks for next winter). 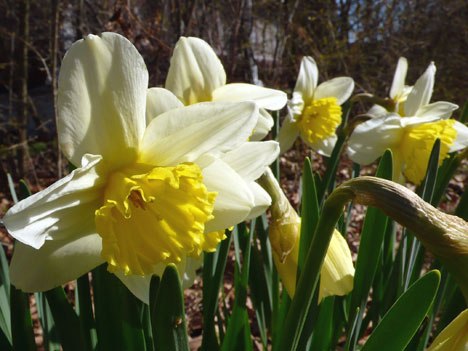 19 thoughts on “chasing winter out”