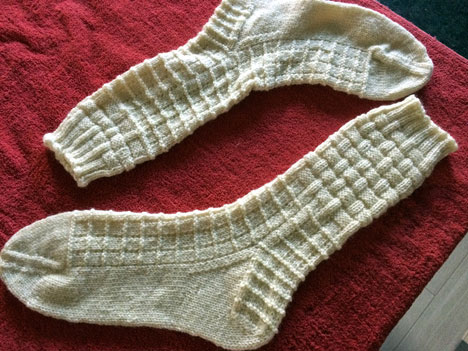 one last red and white photo, from a few mornings ago when i blocked david’s finished christmas socks. they turned out so cute and look so fluffy and soft after a nice hot bath. if they look a bit different to you, you’re not mistaken—the second sock has a bigger proportion of the upper calf pattern; i like that design better.

well, i hope you all had a festive end/start to the year—we celebrated with food, of course; it’s been such a pleasure to have full use of our kitchen for holiday events this year. 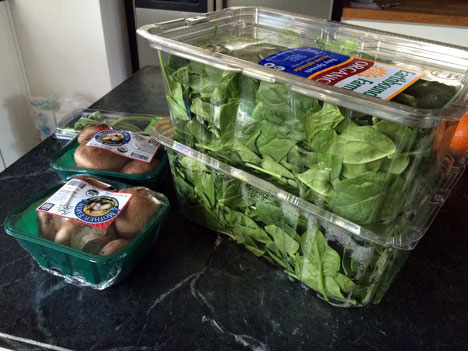 i haven’t made lasagne in such a long time and i decided a couple weeks ago that this is what i wanted to do for new year’s eve. we prefer the vegetarian version which suits our tastes as well as our friends. 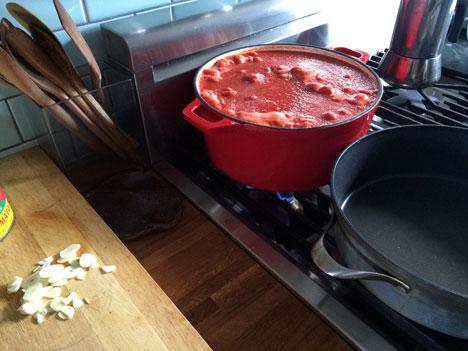 before i even put the coffee on yesterday morning, i got a pot of tomato sauce going on the stove. a vegetarian version is very simple and quick to get started—just some garlic, olive oil, tomatoes, salt and pepper. this pot was mostly made with the frozen crushed tomatoes i put up on labor day, with one can of my mom’s favorite puree to help thicken the sauce.

next i fired up that big sauté pan to cook the spinach and mushrooms for the filling. 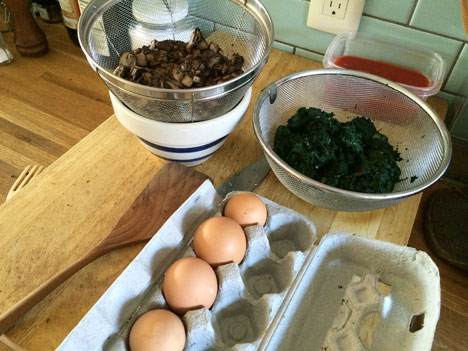 i’m a little picky about lasagne—i only like it made with homemade pasta. when i lived in NYC i used to purchase it, but we can’t get that here so now i always make it.

i haven’t made pasta since switching to a gluten free diet, but i wanted to try; not only would i be eating it, but a couple other of our guests are also on GF diets. but i was nervous—there are as many gluten free pasta recipes as there are pie dough recipes and similarly, there are VAST differences between them. and the last thing i wanted was an unpleasant pasta experience of my own making; life is too short.

after reading several complicated ones, i landed on a very simple recipe from a food blogger/podcaster with a nice italian (i think) name and figured this one was probably my best bet. funny enough, when i compared it to the recipe in the gluten free cookbook from america’s test kitchen, it was nearly identical to theirs, with the same ingredients in mostly the same amounts. since i’ve had really good luck using the ATK GF recipes for the most part, i found this reassuring.

i was making a regular pasta lasagne too, just in case. david tried to talk me out of making two, insisting he would be just as happy with a gluten free one, but i wanted to test them side by side (and since he does NOT eat foods he doesn’t care for, i didn’t want to have to have to eat all the leftovers by myself). 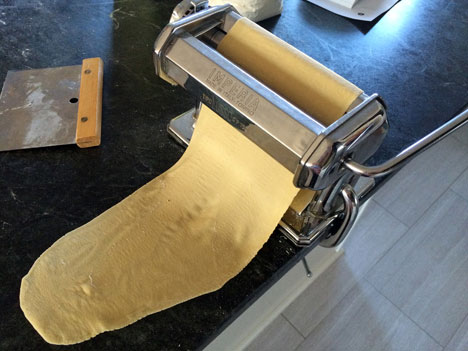 the dough went together easily and without and funny stuff happening. it held together very well; while  not as elastic as the wheat dough, neither was it crumbly or sticky or at all difficult, in fact.

after the first pass through the pasta rollers especially, it pulled together and became silkier with each pass; only the edges remained  a little ruffled (which is fine) 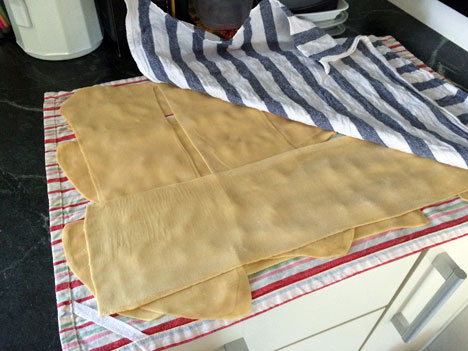 to prevent it from drying out, i laid the strips between a couple of slightly damp towels while i rolled the wheat dough and blended the cheese filling. the sheets did not stick together at all while resting, something i always have to deal with in a wheat dough. 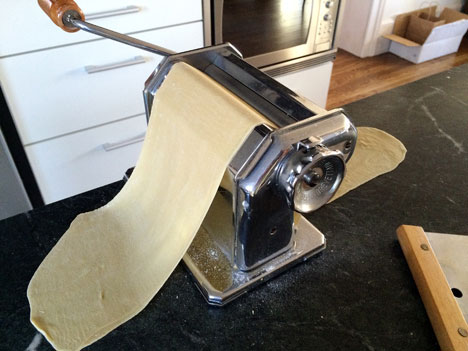 the difference in handling the wheat dough immediately after was startling, actually—it is noticeably more elastic and silky. they were both nice to work with, though markedly different.

by the time i got the pasta rolled, the fillings mixed, and the lasagne out together, beckie was on hand helping out and it was nearly time for people to arrive. wow, the day was flying by. after filling the pans, i had a couple strips of each dough left over so i cut those into noodles that we can fix another night with a simple sauce for a real taste comparison.

i put the two pans of lasagne in the oven and made the antipasto—here’s where bad blogger took over and i forgot to take pictures for a while. 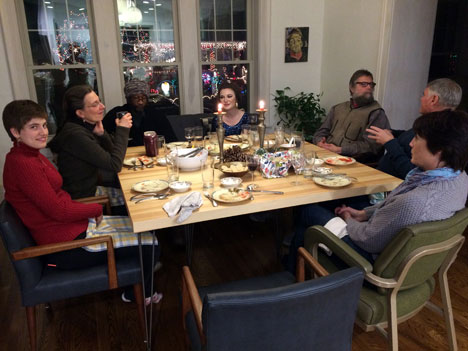 the next time i remembered, we were all seated at the table grazing the antipasto, shrimp cocktail, and tapenade. for this celebration the antipasto was made up of cheeses, roasted peppers, tomatoes, olives, and artichoke hearts. growing up in my non-vegetarian family, it would have also included salami and prosciutto.

when the lasagnes was done i got it out of the oven and let it rest for a bit while we lingered over preliminaries—that’s the secret to keeping it from falling apart. just as a roast or a turkey slices better and prettier when it sits for a bit, so it is with lasagne.

here they are side by side, with the GF version in front and the regular one behind. they were both a big hit—everyone who tried the GF version declared it the best and honestly, i could not detect any way i would say it was different or less tasty than my last regular lasagne experience.

haha, if it looks like more was eaten from the regular pan, that’s only because we GF people had not made our way to second helpings yet, while the guys had all cleaned their plates twice in no time.

silly me, i did not get a photo of the gorgeous dessert the helena brought—one of her decadent GF chocolate cakes. 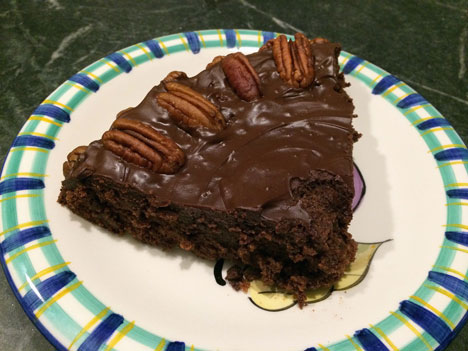 lucky for us she left the last two pieces behind for david and me—we’ll probably indulge later tonight.

i am knitting up a storm, but having finished up all the gift knitting, i am working only on secret projects for a couple of days—so nothing  i can share just yet.

however, i have a few new projects i want to start, at least one a sweater. i even have the yarn here waiting to be wound up. i’ll be back in a couple of days with some new knitting; in the meantime, stay warm and enjoy yourself.

today, i got up early to run my first race of the year and immediately afterward, emily, erica and i headed southwest on a cross-state drive to visit the mill which produces our better breakfast yarn and now, all of our mohair blends—chebris and cabécou lace and sport, plus the new chèvre—all those luscious gray samples i showed you the other day. we are super excited and will bring back a full report with photos next week.

speaking of emily, she has a quick update to end the post:

We have a few new things on the store site, so i thought I would send the links for the ones we haven’t talked about yet 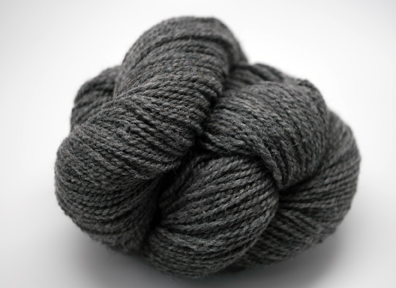 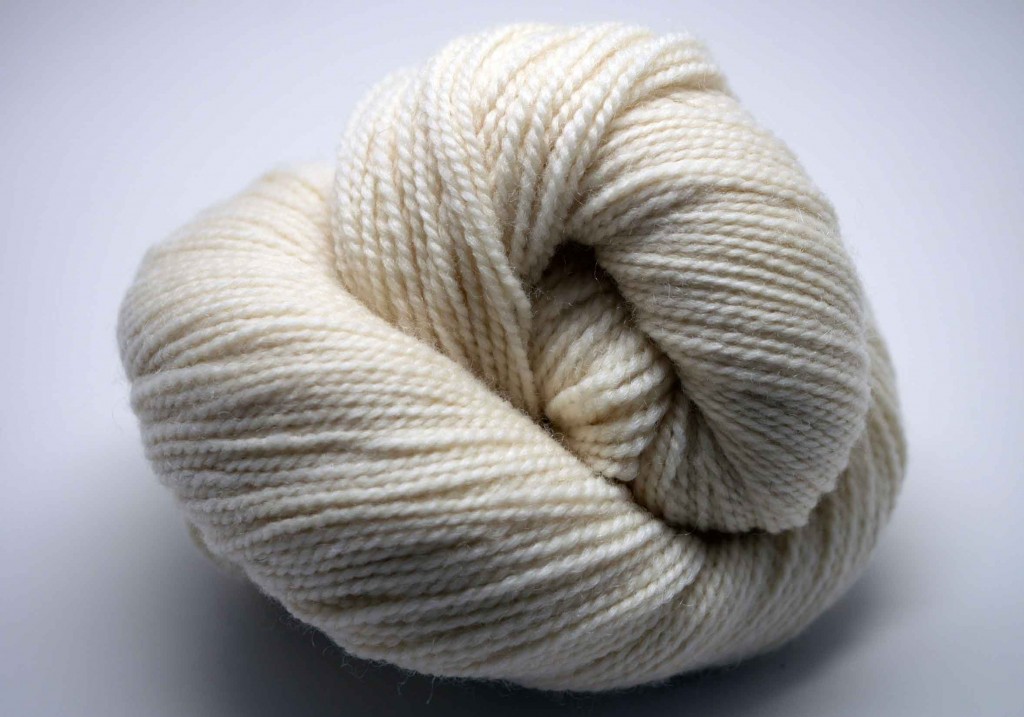 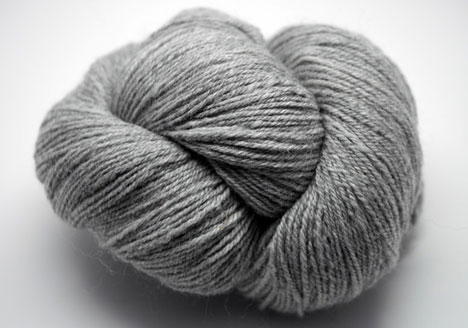 now this is gray i can handle. have a great weekend everyone; see you when we get back.