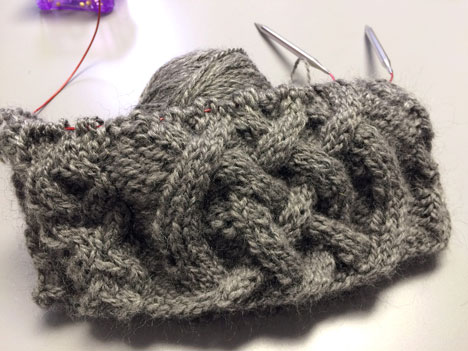 with this week just hours underway, we are already bracing for heavy snow and blizzard conditions that will bring up to twenty four inches of snow to our eastern seaboard states. sounds like we’ll be needing a good knitting project to cuddle up with. laura cast on this woodcutter’s toque in a sample skein of chebris worsted (coming in february!!) that we are all drooling over.

she swears by this project as the ideal blizzard knitting, as it was immediately addictive and impossible to put down—so be sure to get changed into those jammies before you cast on. 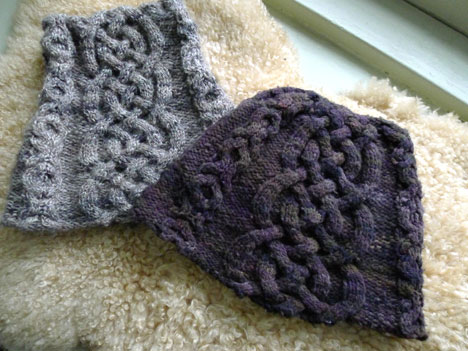 working this hat IS a lot of fun and i can attest that the result is a hit with david at least—two of the originals appear frequently in his rotation of favorite hats and when he wears one, he draws a lot of interested queries about it.

there is really but one choice to make as the first flakes begin to fly and the first DVD of your marathon movie series clicks into place—whether to complete a healthy chunk on a big WIP or to cast on new and useful accessory that you can actually wear, once you emerge into the world again. 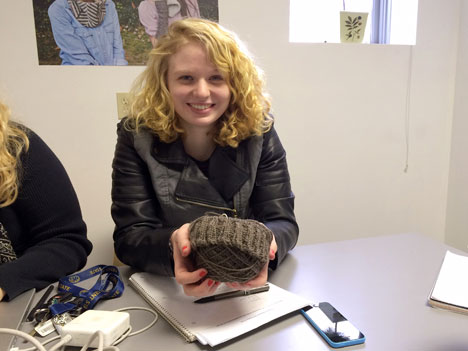 emily is all set, now that her knitting has hit its stride; she has a high peaks hat on the needles in kent worsted (it’s possible that she’s actually knitting a hot waffles cap; i’m doubting my memory now).

hat or mitten projects have several advantages—the patterns are are easily purchased and downloaded without leaving the house, almost every knitter has a suitable yarn on hand to make one, they are interesting but still allow you to watch TV, and they are quickly finished up so that you can wear them to shovel the snow or play in the park afterward.

barb was kind of making fun of me the other night when i brought a pile of swatches to our knit night (wednesdays, 6:30 to 8:30). she remarked that i could have just knit from an existing sweater pattern in the time it took to knit all those swatches and come up with a new project.

tell me about it, sherlock. do you really think i do this to break speed records? 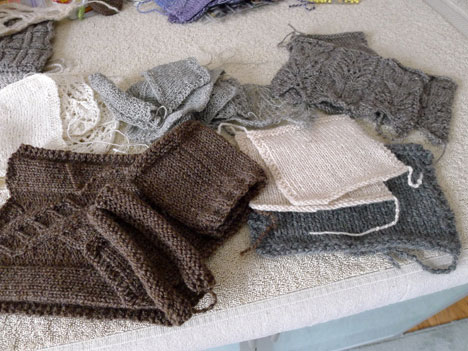 but now, with a nice number of projects planned and swatched out in advanced (there WAS a method to my madness, heh), i have my pick of what i could nestle in with for winter storm knitting (especially since i have a yarn shop in my back yard—which granted, is unusual).

in fact i have swatches everywhere right now. but the strongest contender for my attention is a new pullover with a cable pattern that i love knitting. i chose kent DK, a soft springy merino/romney blend which i haven’t knit with nearly enough—and i’ve had my eye on the kelp shade for a sweater for ME since it came in last year. 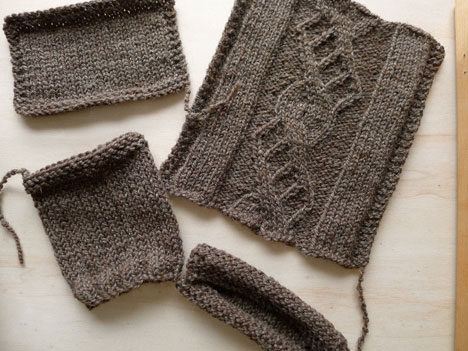 last week, i swatched my fabric every which way to prepare—both the cable panel detail and in stockinette, washed, unwashed, AND in the round.  i used information from all these pieces to work out the pattern draft (though i’m not working any part of my prototype in the round, i may see if we can produce a pattern for both versions). 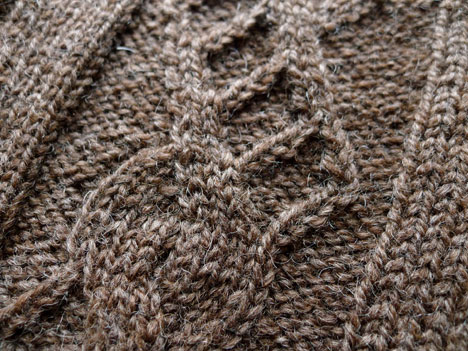 the cable (from barbara walker’s second treasury) is so cool and so fun to work. it’s actually not a real cable at all, but a large twist stitch pattern that shreds into ribs and comes back together again, over and over. the fabric it makes is not bulky or heavy because there is never a place where all the stitch cross over each other. so it has the appearance of a complex, heavily cabled fabric, but is actually quite light and breathable across its whole surface. 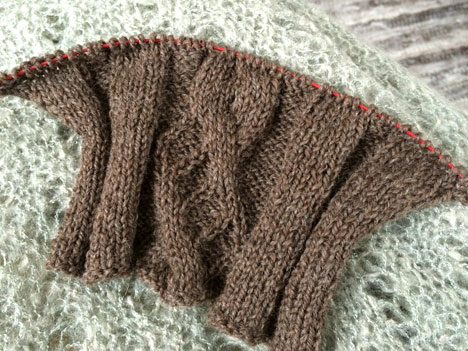 i cast on my first sleeve last monday evening. our kent shades come in several families, but the kelp stands out a bit as unique in that it is a warm, caramel with gold—almost green—highlights. as each batch of our yarn will vary with whatever the wool crop brings that season, when i see something that stands out to me, i make sure we save out a sweater’s worth for a sample. 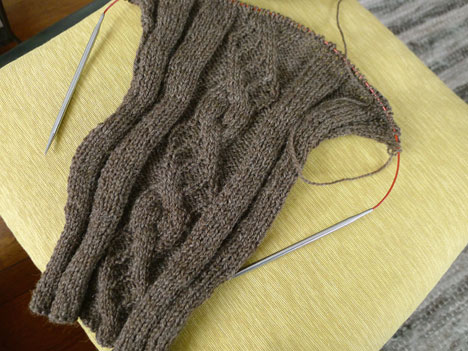 well, this is one project i love in every way—the colors in the wool are entrancing, the cable is addicting, and in DK weight on (what i consider to be) bigger needles, it’s flying along. by thursday morning i already had a good bit knit. 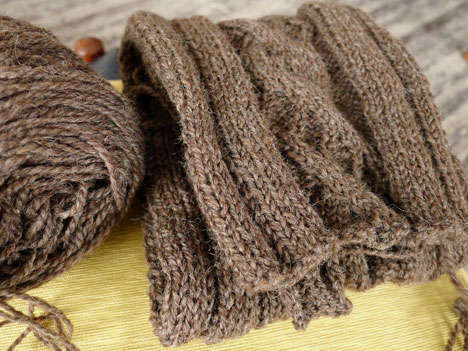 that piece was off the needles and folded up by friday, when i launched right into the second sleeve. 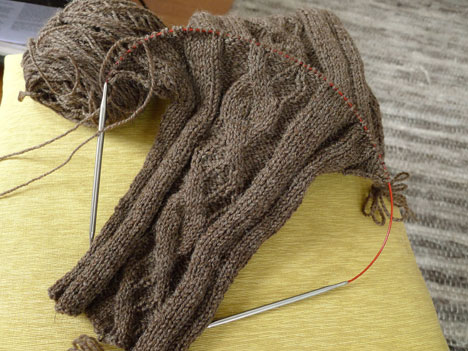 i really needed project like this—one that i don’t have to worry about getting done for a deadline or meeting anyone else’s expectations. i mean, i DO plan to publish the pattern, but what drives the design and the choices i’m making is purely personal—which feels great right now; very freeing.

by the way, it’s not unusual for sweater pieces to look like writhing sea creatures as they come off the needles, or for them to be the wrong size and shape entirely. if you are new to sweater knitting or still contemplating whether you want to try, know that these homely pieces will eventually be transformed by blocking and that you will be witness to absolute magic when it happens.

so, i have my sweater to work on. oh and look—the snow is growing heavier as i write this (can you hear me grinning?). 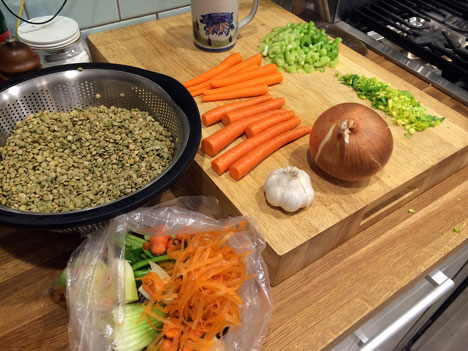 now don’t forget to cook up a big pot or casserole of something warm, easy to heat up, and filling—that way family members can help themselves and leave you alone to knit. last night after dinner i put on a pot of my grandma’s lentil soup—which is vegan by the way, using just the few ingredients you see here, plus some tomatoes and later, spinach. it took just a little while to prep and then i sat to knit while it bubbled. 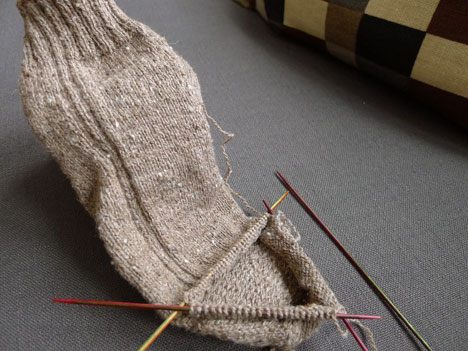 of  course, i always have my little sock to work on should i need a break from the sweater, or something portable to work on in the kitchen while fixing a meal. i really love the way this is turning out—with such warm, tweedy goodness, i’m really hoping for great wearability as well. 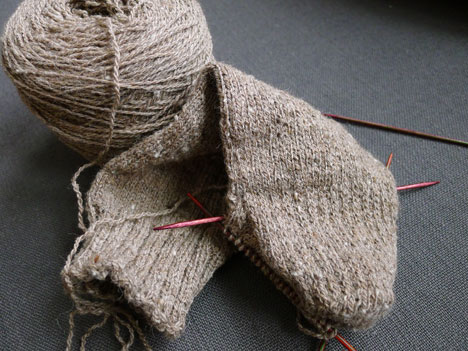 though i did have a moment the other night when i had to kick myself for a stupid mistake i’d made. i had knit the heel flap and put it aside for later. that evening i pack it in my purse to take to a meeting. i merrily knit away around and around while people talked and presented. several rounds into the gusset shaping, i realized something was amiss—my heel looked awfully wide. groan—i’d forgotten to do the short row shaping to turn the darn heel. r-i-i-i-p-p-pp 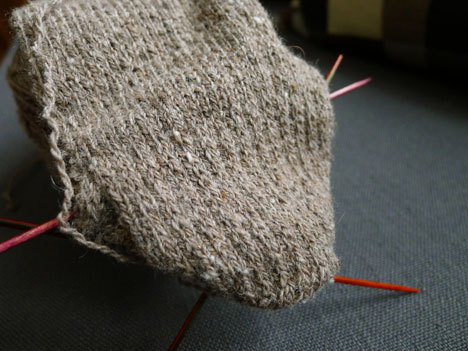 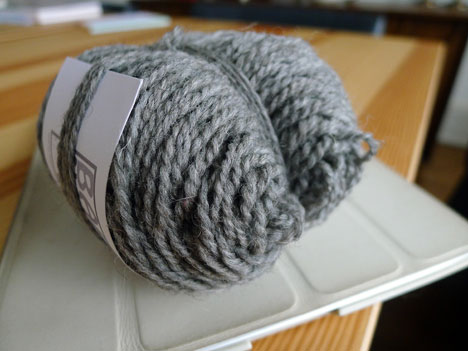 now that should be plenty to get me through one (oh heck, even TWO) snow storms. but i will always be that knitter who needs to be overly armed and prepared for any eventuality. i’d rather carry a couple of extra projects that i’ve no hope of getting to, than find myself stuck someplace (even at home!) with nothing to keep my hands busy. that’s just me; i’m sure none of you have any experience at all with such an issue. 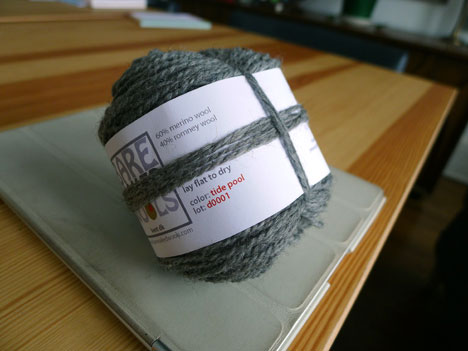 anyway when this new, medium gray (AKA tide pool) shade of kent DK arrived last week, i leapt on it. i got a bee in my bonnet that david would look adorable in a natty cap knit from one of our yarns. 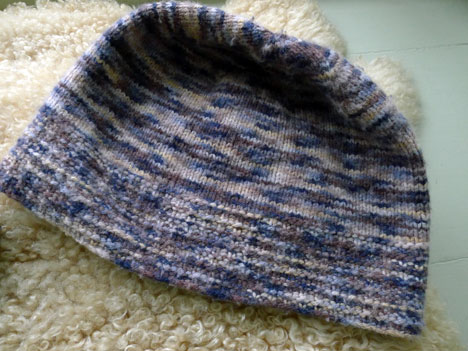 david’s got a couple of older hats that have really seen better days—like slöfock, one of his favorites. but the colors are fading and the fabric is pilling after several years of constant use; time for something fresh. the natty cap has a similar brim texture and body shape; i think he’ll like it.

i really waffled between this new kent shade and some shade of stone soup DK. but then i realized it would knit up quickly and i could make a second one—maybe for me—in stone soup. 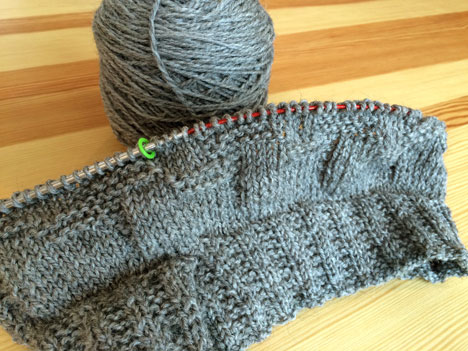 so last evening while i was cooking that pot of soup, i cast on.

holy cow—is this ever squishy; i love it. the pattern doesn’t include a size to fit his head (i guess i always thought of it as a girly design before), but it was easy to size up from what is included. plus, since this yarn has more body than the original yarn, i was able to used needles one size bigger all around and that helped get me to the size i needed—big. 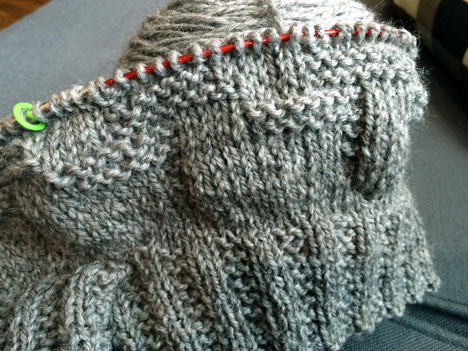 the texture of this design is a bit subtle, so it relies on a yarn that offers good stitch definition, which kent delivers. it also relies on fiber that softens nicely so that the hat body slumps in just the right way and kent does that too. with a couple of our natural material buttons added at the closure, it’s going to be quite good looking i think. 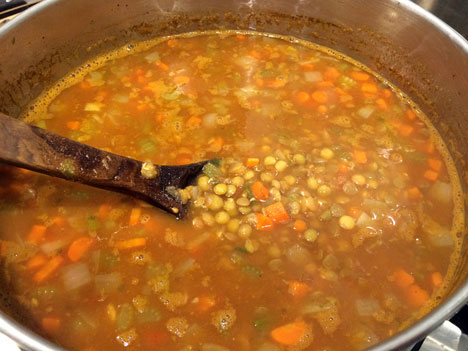 and the soup turned out yummy; we’ll probably have some for dinner tonight. 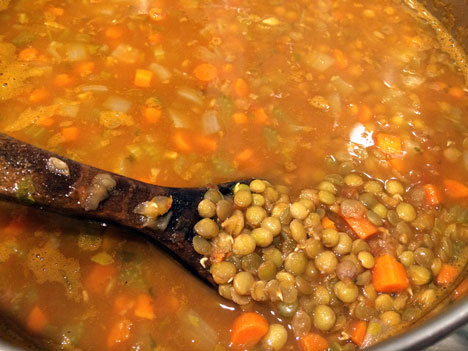 of course i cooked enough for an army, but this soup freezes very well and there’s a rumor going around that we might have company from pittsburgh coming to take a class sometime next week or the week after.

and as i said before, i like to be prepared.

9 thoughts on “get ready for weather”