hehe, you know that movie, right? where the guy keeps waking up to the same day over and over? when i looked over the photos i have for today’s post, i sorta felt like i’d be doing that to you. and then i realized that it actually is groundhog day. oops—sorry for the coincidence.

except for the fact that it makes running a bit hazardous, i don’t mind all that much. i can switch to the stationary bike when it gets likes this. there’s something kind of very nice about snuggling in to enjoy winter’s indoor offerings. i had a VERY productive knitting weekend. 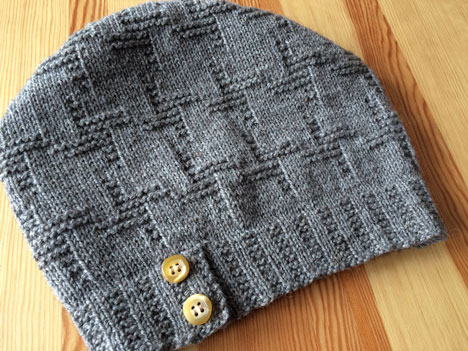 i got the buttons sewn onto david’s new natty cap—doesn’t that kent DK make a beautiful finished fabric, now that it’s clean and dry and all smoothed out? i just love it—makes me want to knit a sweater in this pattern (next thing onto the needles i think!). that’s what blocking will give you—more ideas.

i just have to decide which yarn, but i’m pretty sure it’s going to be better breakfast DK, which is due in today or tomorrow i believe (i know that standing right near the door won’t make it arrive any faster, but it’s all i can do not to station myself there anyway.). i’m thinking muesli or porridge; not sure . . . daybreak could be a contender too. 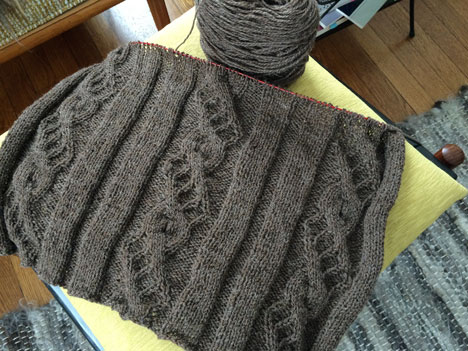 i am making so much quick progress on my cam cable pullover (also in kent DK, this time the kelp shade) that i’m going to have to decide very soon what my next sweater project will be. i’m almost to the underarm bind off on the front piece now. it’s going so fast, i can hardly believe it’s me knitting it—yeah, you can just nickname me barb for now. (ok, barb, stop that laughing).

actually, barb is going to be test knitting this sweater soon as well—as soon as i write up the pattern for it. she admitted to be a little surprised when she felt the fabric the other night; she had it in her head (even though she has a good supply of the stuff at home) that this yarn was scratchy and heavy. but it’s not; it’s actually very light and airy—and soft. no, not like cashmere soft; more like linen soft—the kind that takes you by surprise. soft in a sturdy way.

i’m also going to have to come up with a name for this sweater. i’m playing around with a title using the word “shreddy” in some way. or  or we do like keeping it plain and simple, as in cam cable pullover? 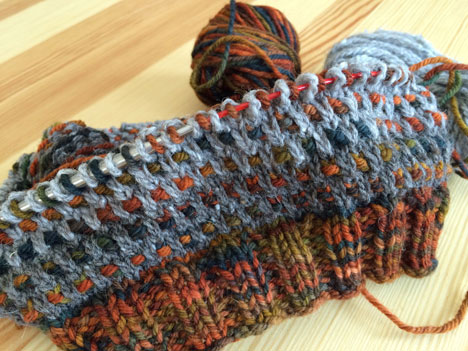 early saturday morning, i got back to work on that UFO i told you about—a hat i’d started in october based on my mass transit cowl design. i was clipping right alone, wondering what the heck had kept me from finishing up this super fast and fun project. i wondered about the size, suspecting it might be too big,  but kept going; it wasn’t long enough at first to really tell if it would fit (or so i told myself). 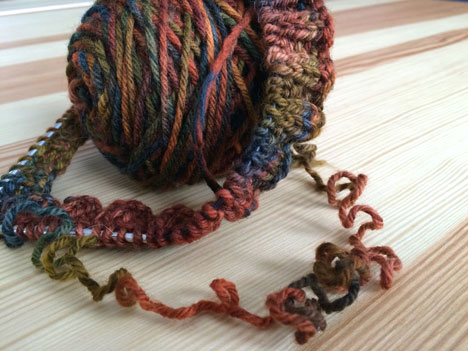 finally, in the cold light of yesterday morning while waiting for the coffee to perk,  i admitted that it really WAS too big and i should cut my losses, rip back now, and reknit while there was so little to lose. i’m trying to be THAT knitter more often and less the other, who pushes ahead anyway and then ends up having to knit a second garment that actually fits. 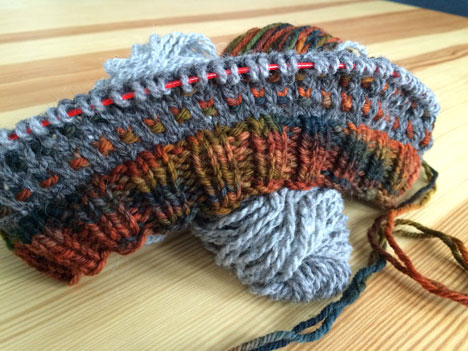 and really, in no time i had breezed through the brim and begun the color work over again—i was astonished at how quickly and unconsciously the rounds went by. 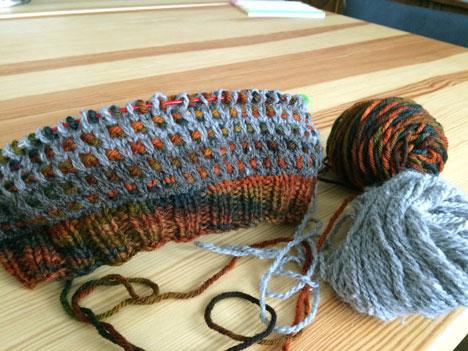 i finally had to stop so i could get out to a tea event at the yoga studio where i take classes. since it was snowing like crazy, i was reluctant to both leave my fun knitting project and go out in the storm, but i did. i’m trying not to be such a hermit. 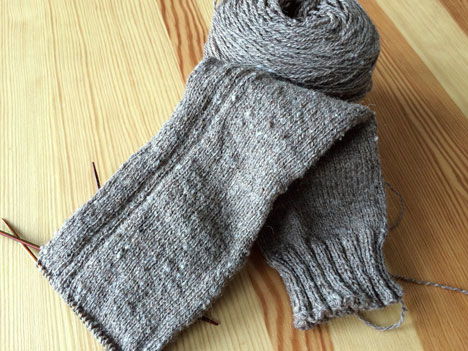 suspecting i might get there way too early (i did; the snow only slowed me down by about two minutes), i remembered to put my sock project in my bag to knit on while staying out of the way of the setup for the event. 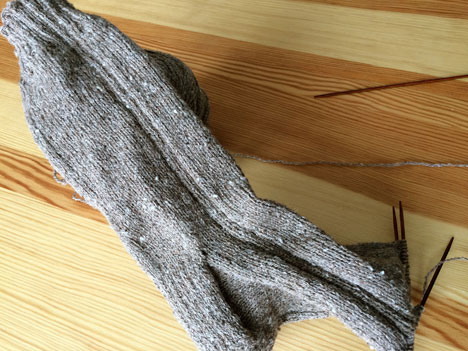 and it was such a relaxed event that i actually continued knitting during the whole thing, getting quite a good way along the length of the foot. it was worth going just for that, haha. seriously though—the tea part was great, too. i meant to ask if i could take photos but kept getting sidetracked by the samples and the talk; it was fascinating. 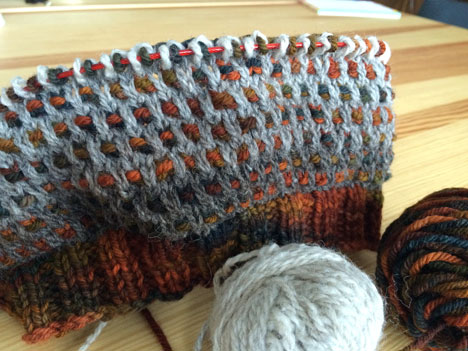 last night after supper, i worked on blanket club preparations until late, then knit on the sweater front for a while while listening to a book, and finally, added a few more rounds to my hat in front of the TV before bed. but i was too tired to get much further than where i left off that morning.

however, once i was back in the kitchen making coffee this morning, the pace picked up considerably and proceeded with relish. this knit is so addictive i almost hate to tell you about it, except that it is also so good. 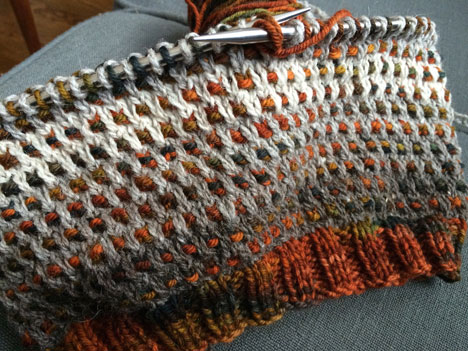 i’m using four shades of our stone soup DK yarn for the background, changing every four rnds. if you invest in new yarn, you’ll have enough for three or four accessory projects. if you’ve got leftover amounts of gradient yarns about, that will likely be plenty for one (i haven’t tallied the yards for each shade, but i’m guessing about fifty each for the whole hat). added to the background shades, i’ve got about two or three ounces of briar rose fourth of july in a bright variegated hand paint with several hues (don’t be shy about the colors; the more and louder, the better).

the final effect is like waves of colored blinking lights—but in a good way; i love it. you can also create a similar effect by doing the opposite; use a more subtle yarn in tonal shade in the background with either neutral dots or dots in complementary colors. 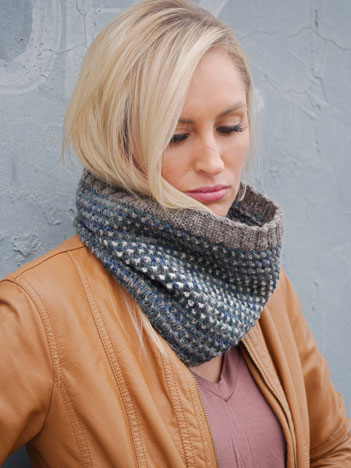 like we did here, using the mass transit kit, putting the color yarn in the background and working couple shades of confection sport for the dots. 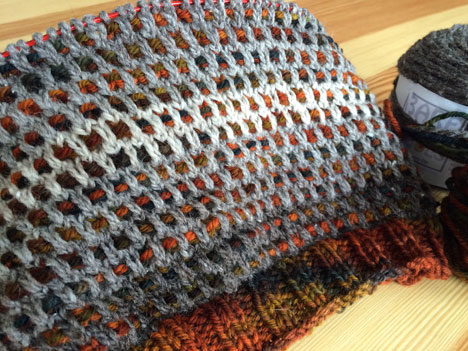 anyway, SO glad i ripped back to change that size! it’s actually still got a fairly soft fit, but much closer to my head, so it will stay put better. and if it turns out still to be too loose, i could add a cashmere lining and that will definitely make it fit correctly.

this project is well over the halfway hump—i just might have it finished by the next blog. good thing too, because we’ve got a lot of winter left here and i need a good hat. hmm, maybe i should consider adding that cashmere anyway, whether i need it or not? 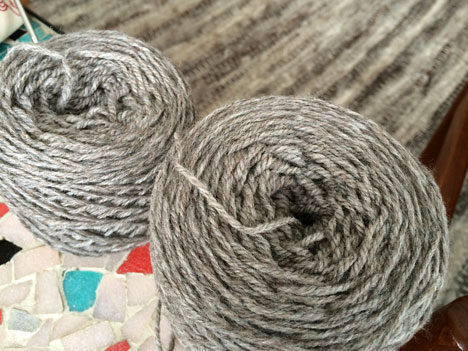