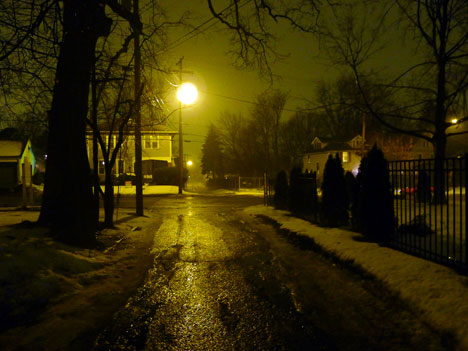 it’s kind of like the night before christmas around here—the air is filled with that exciting, pre-event buzz.

david is putting the last touches on some graphics and photos, i’ve been swatching so i can start my next sweater adventure (more about that in a minute), 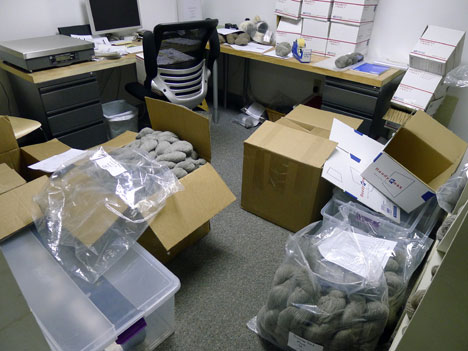 anastasia and lillian have been counting, labeling and organizing their little hearts out 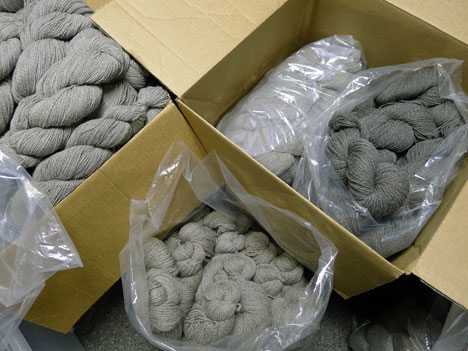 and laura has her finger poised over the go buttons on a wave of posts and pins to get the party started. 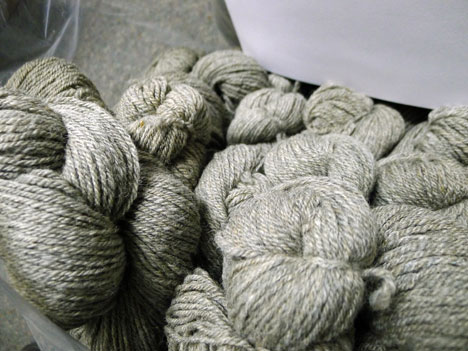 we’re excited to finally serve you up a better breakfast in a buffet of yummy flavors, starting first thing monday morning. david and anastasia will open up and refill the listings throughout the day as she and lillian get more yarn counted, labeled, and up on the website. 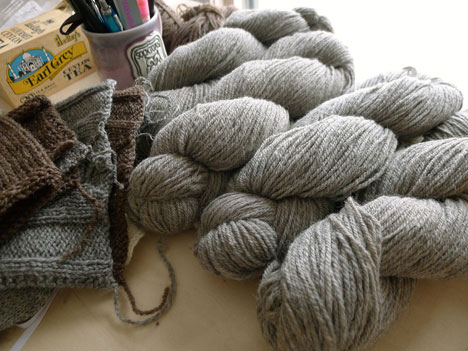 i exerted executive privileges and secured a SQ of the muesli DK before the big grab begins, so that i could get a head start on my next sweater project. that’s right; i’m ready for a new one now (more on THAT in just a minute; SO many exciting things happening at once!).

before i launch into today’s knitting news, i promised laura and erica B that i would mention the sock knitting class that we have scheduled to begin on thursday, february 12 (scroll down to view the sock class information). this will be a fun and easy way to learn how to knit socks, beginning with a worsted weight baby sample sock (materials for this project are included). after the sample sock session, students will spend two more sessions working through a sock to fit themselves. this class would be a great way to try out one of our hardwearing, natural sock yarns!

ok now, which do you want to see first, my cam cable sweater progress or my swatches for the next sweater? oh well, i guess i’ll have to decide for you . . . hmmm. let’s go with the cam cable and finish up at the end with the new swatches. 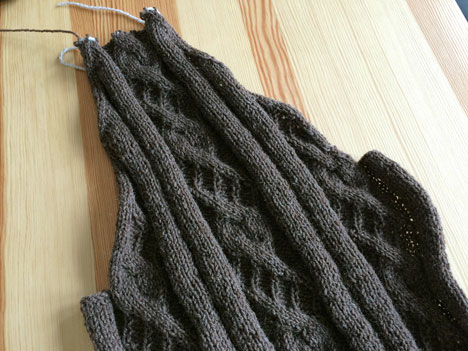 that back piece i showed you a couple of days ago, when i was an inch or so in?? it’s done. i mean wow, did that knit up fast; i think the bulk of it was knit in three sessions, the last being this morning.

it was off the needles around noon and much as i wanted to block it right then, i also wanted to take advantage of the unusually warm weather to get out and run, so i left my pieces piled up on the pressing bench and tied on my running shoes before the sweater could get the best of me. 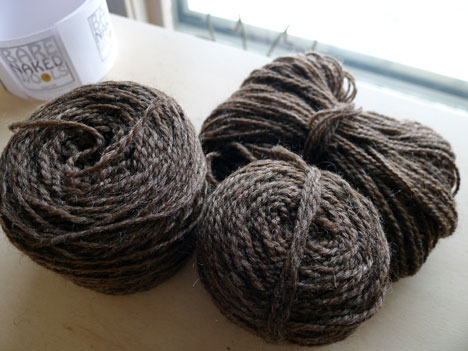 i have quite a bit of yarn (kent DK, color kelp) left from the four skeins i opened to knit this project—if i wasn’t working from scratch and knitting a bunch of swatches, i probably could have gotten away with three skeins (with my luck, i’d more likely still need to open a fourth for the last few yards).

having a sweater’s worth of finished pieces just at this time is rather fortuitous, since i’m in the midst of preparing for another craftsy class, which is all about the essentials of sweater knitting. in addition to asking for input from lots of newer knitters as well as experienced pals, i’ve taken notes at every stage of knitting this sweater to add to my curriculum. 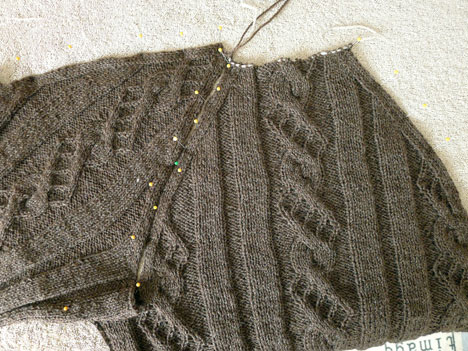 i also promised the producer that i’d take photos wherever they would illustrate a concept well, such as how the pieces go together 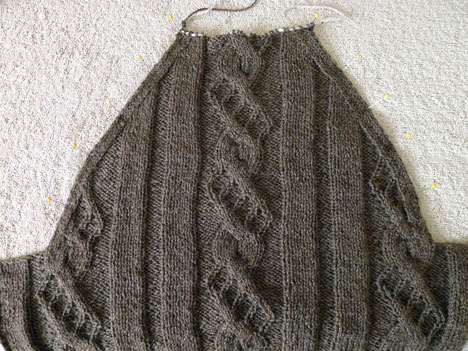 or what we mean by opposing decreases. 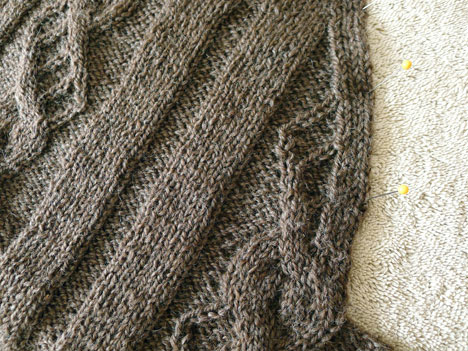 and the concept of “keeping to the pattern” while shaping pieces (as luck would have it, this is a particularly good example because the cable is not symmetrical). they won’t necessarily use my photos, but they will be helpful for reference in creating illustrations and more professional photography.

anyway . . . enough of that chatter—i know what you’re lusting for right now. and i got your back; on with the blocking prøn! 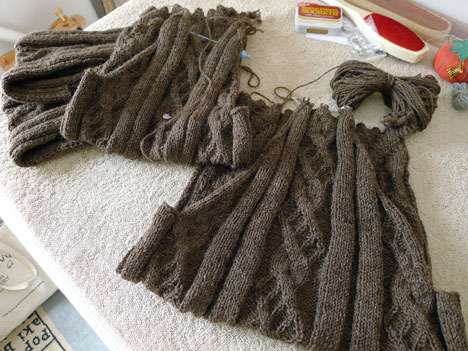 no one—including me—ever thinks their finished sweater pieces look crappy. how could they after all the work you’ve done? many a knitter will swear that they love the depth and texture of the pieces just the way they are and are loathe to block out of fear that this gorgeous texture will flatten and disappear.

first of all, that’s just not true—they won’t. and secondly, that “texture” will be lumpy-bumpy and entirely lacking in drape on the body; to display it so actually does your work a great disservice.

and thirdly, as soon as the garment is washed for the first time, it will be blocked anyway; you may as well do it while you have some control over the process and the ability to make adjustments if you wish (but i know you won’t need to, because you did your due diligence in swatching before you got started and throughout your knitting, didn’t you?).

anyway, back to my cam cable sweater . . . after my run and a shower,  i beat a path up to my workroom and started pinning, schematic at hand to check measurements. 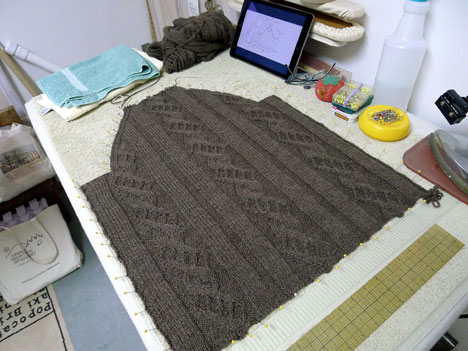 i started with that back piece, which pinned out beautifully to the expected size, yay. i didn’t have to overstretch or live with extra length or width i didn’t want. phew! always glad when that happens. 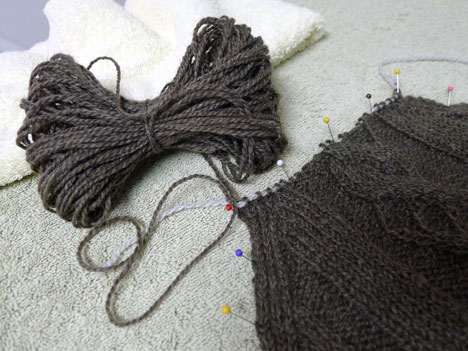 BTW, after that last row at the neck, i didn’t break my yarn; i thought i’d keep it attached and just start the neck pickup from that point, once i got the seams stitched. 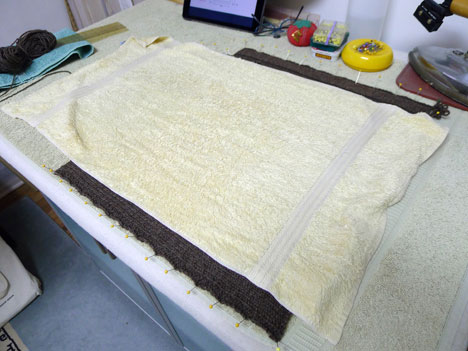 once it was pinned out, i laid a wet towel over it and, using a hot iron, steamed that piece without pressing at all. 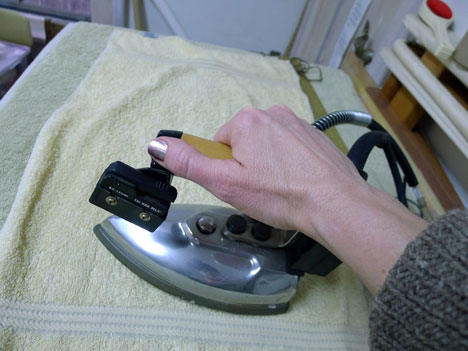 i don’t use ANY weight on the fabric at all; just touch the hot iron to the nap of the wet towel to create steam. this floods the fabric underneath with vapor that works a magical charm to smooth and relax the fiber, make the stitches swell and bloom, and bring a tidy consistency to the surface. 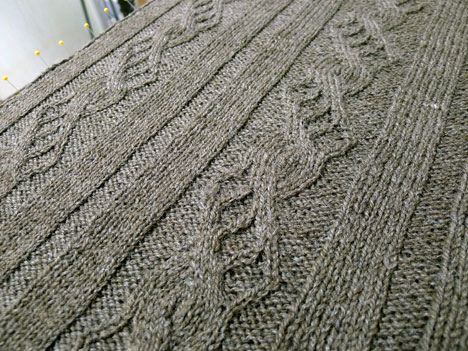 now, isn’t that a texture you want to stroke just a little . . . and aren’t those cables just dreamily swishy once they are opened up a bit? 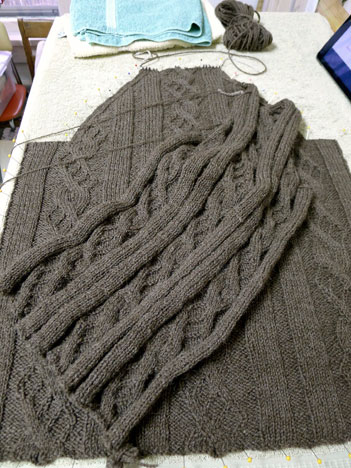 ok, you tell me—which of these pieces would you rather drape on your beautiful bod and tell people you knit? that crumpled, misshapen thing or that smooth talker lying underneath?

now pinning out springy sweater pieces is kind of time consuming, but the good news is that with symmetrical sweaters, once you do one piece, its partner can be pinned out in less than half the time, right over the top of the first one. 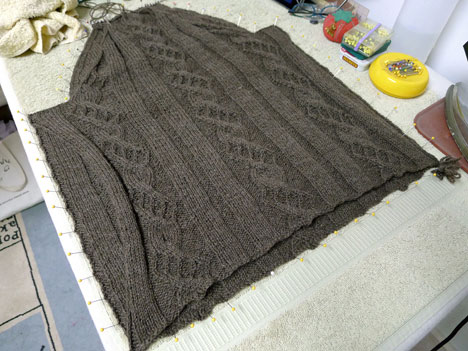 so that’s what i did next, with my front piece. 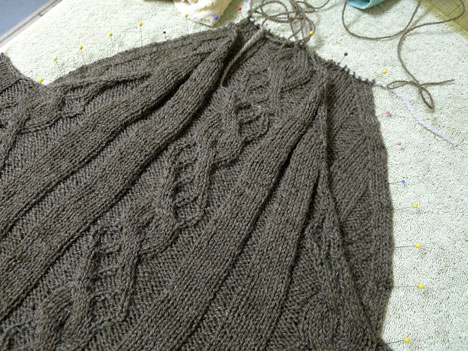 from bottom to top it took just a few minutes. speaking of the front, you might have noticed that i’ve placed the stitches from both the front and the back necks on scrap yarn holders to be pick dup later for the standing collar—thus breaking my sacred rule of preferring a bound off edge to stabilize the neck.

what’s up with that?? 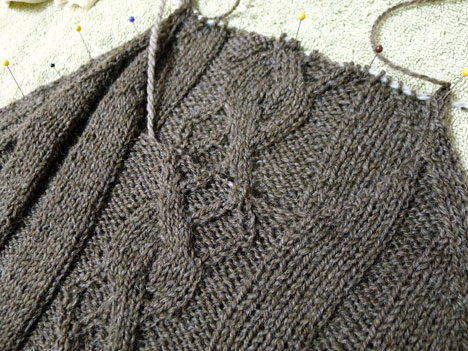 the one time i think it’s ok to break this rule is when we have a cable running up through the collar. cables, by virtue of their very construction, are quite stable and inelastic—i feel pretty comfortable letting them stand in for seams or a bind off. plus, it’s a shame to interrupt the continuity of a handsome cable.

wow, the difference between the blocked body pieces (left) and the sleeves (right) is pretty convincing, isn’t it? imagine if you were here to touch and experience them side by side? 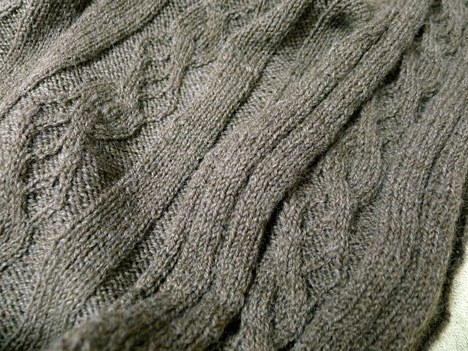 oh, right—you could try this at home and do a hands on comparison yourself. why, you could even invite a friend to share the joy. 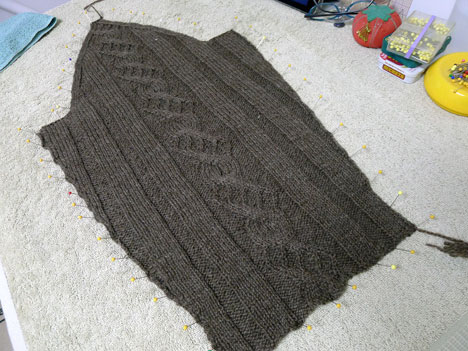 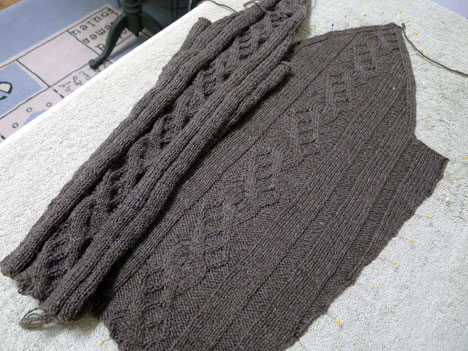 then bring in its partner and pin that one right over the first one. 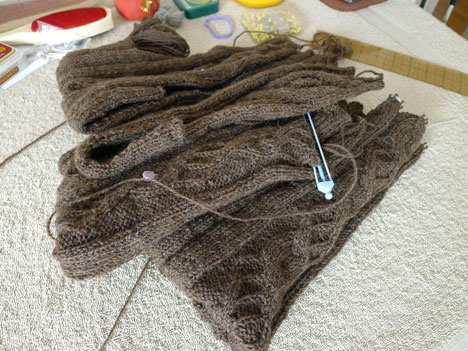 who would have thought when we started with this . . .

that we’d end up with this? 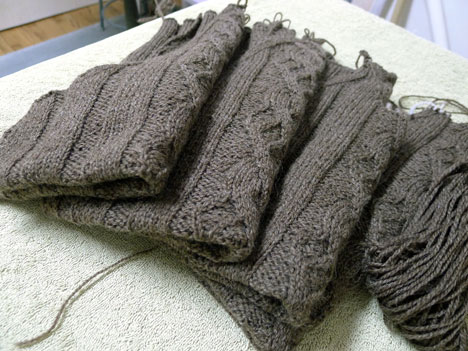 next i need to seam and add the collar—hopefully i’ll have all of that done by the next time you hear from me. i like seaming and finishing, so this shouldn’t be a problem. i’ll be getting started as soon as i finish up this post and since i also have a two hour class tomorrow afternoon, i’ll probably get some done then, too. and then, it will be time to wash and wet block the whole sweater. i can’t WAIT for that because that’s when the last of the crispness in this yarn succumbs—the clean fiber plumps, blooms, and softens to become an entirely different fabric. and while it’s soaking and washing and drying, i’ll already be on to my next project, because by then, i will have swatched and decided on needles and mapped out a basic construction plan for the next design. this time i’m working with the better breakfast DK, color muesli. i just loved the way my natty cap turned out in the natural gray, so i’ve decided that my first sweater design in better breakfast should be a natty cardigan.

i took a break from my cam cable project last night to make some swatches.

i hope you can see the difference; it’s kind of subtle. in fact, the stitch and row gauge are nearly identical. however, the two fabrics are quite difference in their weight and substance, as well as the constancy of the surface. and i think the stitch definition benefits form being knit a bit tighter—in fact, i wonder if it should be even more so.

i’m actually going to knit one more swatch on the next size smaller needle, just to see if i like the texture better alpaca can sometimes use a little more built in structure.it’s possible that it will end up too dense; while i do want the stitch pattern to stand out, i don’t want a sweater that feels heavy or stiff. but i won’t know for sure until i exhaust all the possibilities. i do this work so that you won’t have to!

speaking of which, i should get on with that . . . we have a big week coming up—i need to gab some precious knitting time while time permits.

9 thoughts on “while we wait”