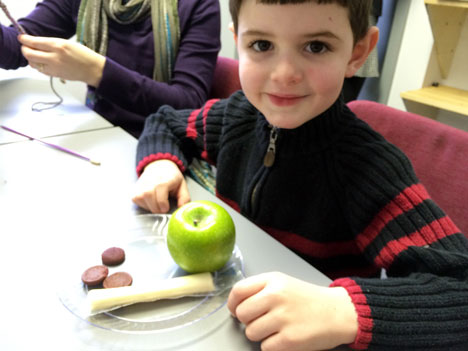 in the midst of a polar blast which blew in a ton of snow and the coldest days of the winter so far, a little warm glow sparked and grew at knitspot HQ on valentine’s day. 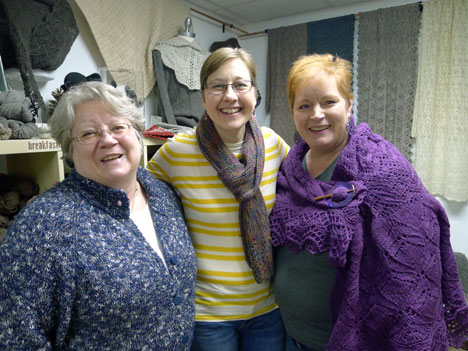 with all that knitting in their plans, i wanted to jump in that car and tag along—i hope they are having an absolute blast with the rest of their weekend. 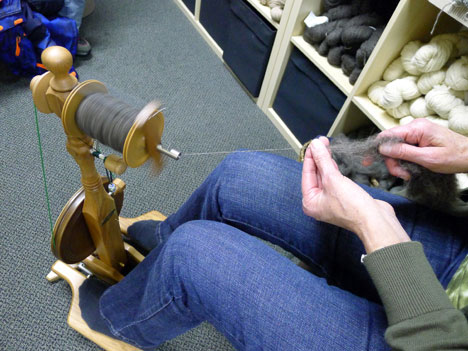 just as they were getting ready to go, beckie arrived with her spinning wheel to show the kids how it’s done. 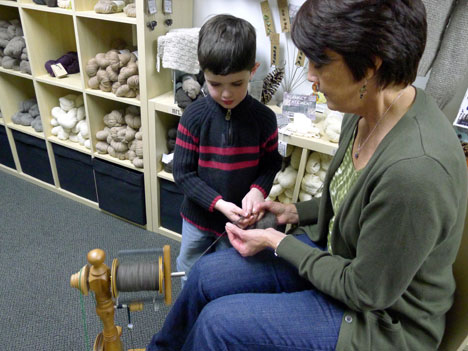 of course they just loved that. 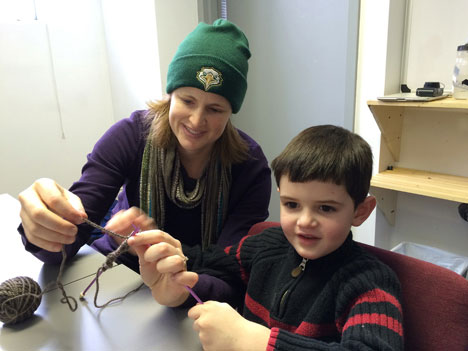 the weather kept a lot of families at home yesterday after all, but the ones who braved the snow and cold to come over had us all to themselves and a good afternoon was enjoyed by all 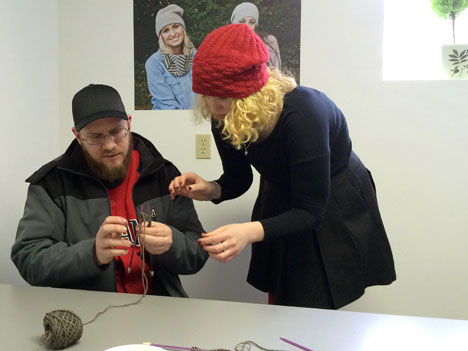 some of them even did some knitting! 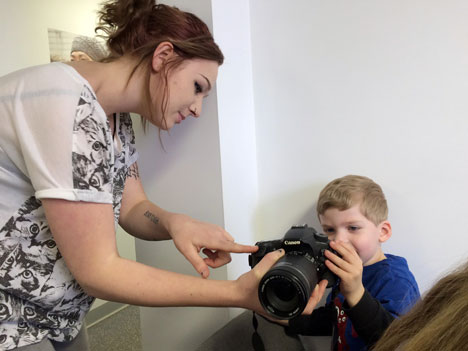 this little guy wasn’t really ready for sitting still with sticks and string, but sheyanne entranced him nevertheless with her camera—now that was fascinating.

we also got some parents to give it a try and i think that was a lot of fun for them. or something a little different anyway.

we really appreciated everyone who came in and hope that they’ll join us again some time.

when the afternoon was over, i scurried back home to get into warm clothes and put a pot of soup on the stove—potato—and i’m glad i did; it was cold last night.

after supper, i finished up work on the first blanket club chapter that will go out on tuesday.

i am so looking forward to seeing how everyone will put together their shades and pieces; i just know there will be a huge variety and some wonderful surprises, both form those with yarn memberships and those who joined up for the pattern only (eBook) option.

the BS ravelry threads are heating up and i hear there is a contest afoot—and you know that contests mean prizes.

alright then, now that my chapter is put to bed (or it will be after one last look-see from anne marie), i can get back to my knitting in earnest. 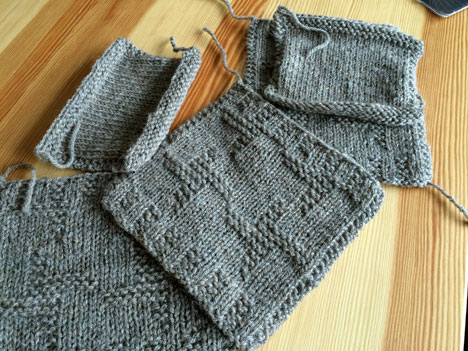 i started my natty sweater in the better breakfast DK option (in muesli, which gets its taupey color from rose gray alpaca). even though i had knit a ton of swatches, i was still really, really not sure what needle size i should go with. i wanted this sweater to drape nicely most of all, but i also wanted good stitch definition and that can result in the two being at odds when it comes to needle size. 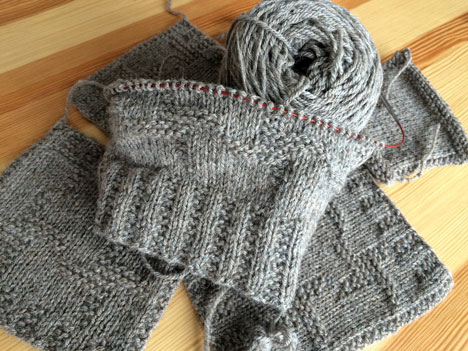 so i began, as i recommend in my classes, with a sleeve swatch (top) on size 3.75 mm needles. i was sure this was going to be right, but after getting a few inches in, i felt like it was too dense. this fabric will become more liquid after a soak and wash, it’s true, but it still didn’t feel right to me. 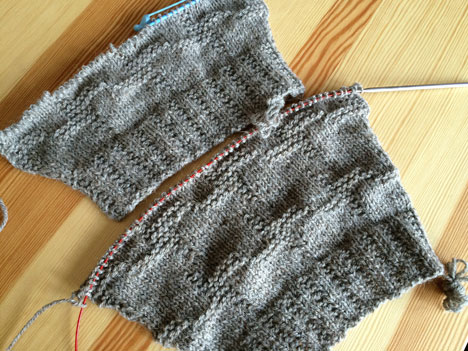 so i put that one on a holder (top) and started afresh on size 4.0 mm needles (bottom).

amazing—it feels exactly right now. i just know it. even if it does become more fluid after a wash, i’m comfortable with whatever will happen. i’m keeping the first swatch because although i won’t use it for this sweater, i happen to need one for the craftsy class i’m preparing to teach—nothing lost at all. in fact, it illustrates points i need to cover in several lessons so it’s a great investment.

when something is right, it’s just right—and it’s amazing how the whole project takes off once you figure that out. my sleeve is almost to the underarm now and i believe i’ll finish that tonight. 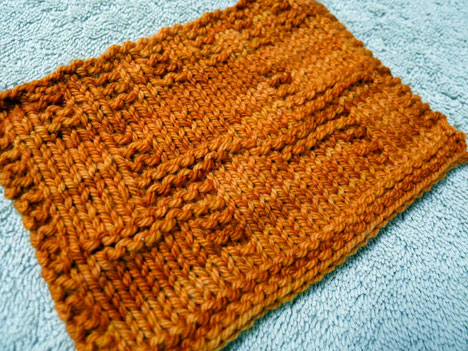 meanwhile, i swatched the pattern in a new polwarth DK yarn from briar rose fibers called joyful—when chris asked what color i wanted to work with, i suddenly felt a need for some orange in my wardrobe (hmm, i wonder why??) and in just a couple of days, here it was on my doorstep. a juicy valentine indeed, hehe.

one of them will be a cardigan and one a pullover—but i can’t decide which. i’m leaning toward the orange for the cardigan and the natural for the pullover, but i don’t have to decide just yet. i can knit the sleeves and backs and then decide when i get to the fronts. barb will help me . . . 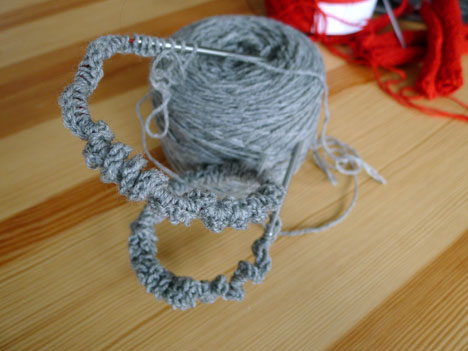 i finally got my little reversible crescent shawl cast on too—poor thing got set aside in the excitement of finishing up my cam cable pullover. i know it’s not very far along at the moment, but i feel as if, with the cast on accomplished, i could pick it up at any time to knit a bit. for this week, it will be my kitchen project to work on over morning coffee—an actual better breakfast at daybreak, haha (snort, i’m such a doofus). i’ll also pack it in my bag for my trip west next week. 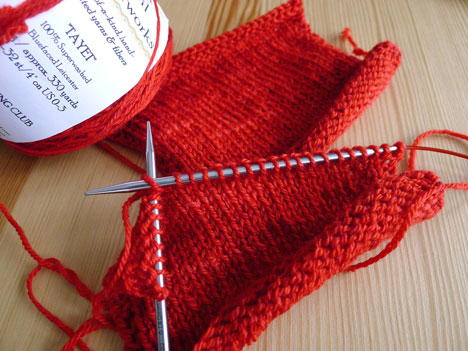 i knew you all would seize on this little group of swatches, haha. honestly though, while the yarn is right, i’m not actually going to work with this color. 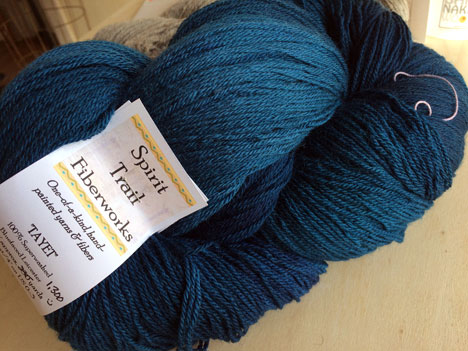 this is the real color, which i personally like a whole lot more (i like red, but not so much for my clothes). i think this skein has enough for the little sweater i’m planning with it, but to be safe—and because i have the spare skein of that red—i’m not using any of the blue for swatching.

i won’t say much more about this just now—since the yarn is a new offering and not yet available for purchase, we’ll save the evolution of this project for a little later. i will say that the tayet yarn is simply divine and i can’t way to delve deeper into that delicious blue bundle.

after all, i’ve actually got plenty going on right now—preparations for a class, a few new sweater patterns in various stages of production, and a couple of garments on the needles (plus a little shawl for good measure). i mean, that’s enough for the moment right?

i knew you’d agree—time to go knit now. have a wonderful presidents day. 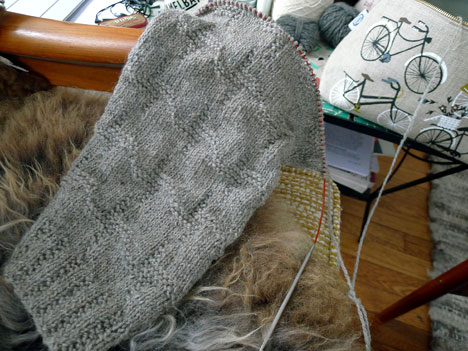 9 thoughts on “sweetheart of a weekend”