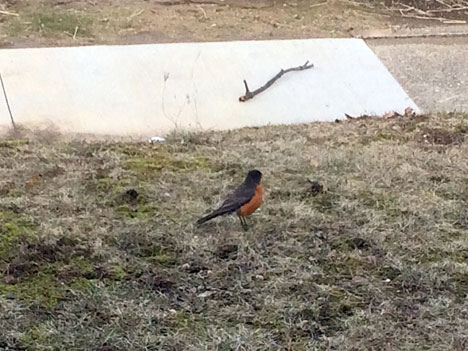 i’ve been watching every day and finally, i saw my first robin on saturday morning. just one. but then i saw one or two more yesterday, too. though  it’s back to being very cold at night again (like in the teens), they seem to be staying around . . . now that the snow has melted off the garden mounds and the top layer has thawed a bit, i bet they smell worms coming to life out there. mmm.

for the first time in many weeks, i had kind of a normal weekend—longer stretches of quiet working time (harder to come by during the week), saturday yoga class, some cooking, and some running. i’m always grateful for the small stuff—like having time to chop loads of veggies and not having to avoid snowy or otherwise suspicious patches on the pavement. 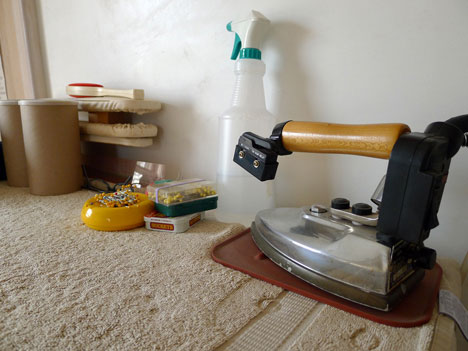 several times recently, people have commented that i didn’t seem to be designing anything new lately. then my mom said something to that effect when i spoke with her yesterday (i didn’t know she read my blog, haha). even david keeps asking when i’m going to publish something new.

oh man—i didn’t at all meant to give that impression! i think my current work is all just either tied up in the clubs or projects that take a lot longer to incubate and hatch (to make use of a seasonal metaphor, haha). 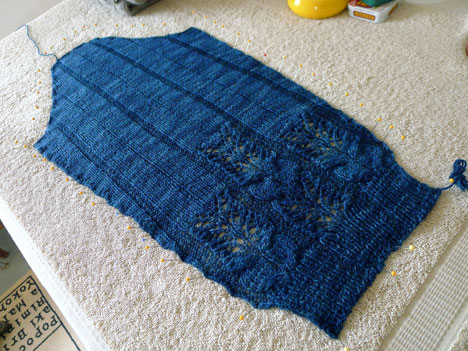 i’ve been knitting up and working out patterns for a whole series of sweater projects—i’ve got six in the works at the moment actually, and probably a seventh to start very soon. it’s actually been kind of a grand central station of sweater projects around here, haha, with patterns revolving constantly between me, tana, renee, and anne marie. which is why it strikes me as hilarious that it appears i’m not working—although now i see that from a different perspective, it makes sense.

i guess i just though that my sweater progress must be kind of repetitive or boring—oh look, three more inches of sweater back—yay. and here, look how much pattern writing i’ve got done—whoopee! and oooohhhh—blocking—again.

not to mention all the ripping and restarting that a prototype can entail. sigh. 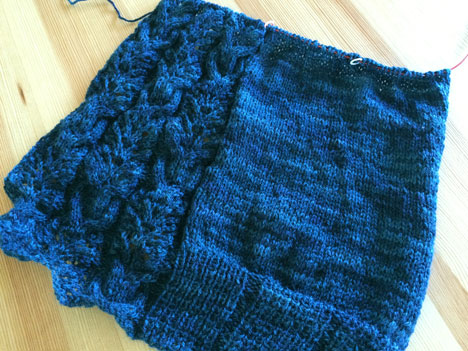 which is what i have done a few times with this current sweater project. it’s all good now and i can finally talk about it without causing panic, but with some projects, i just goof up over and over. 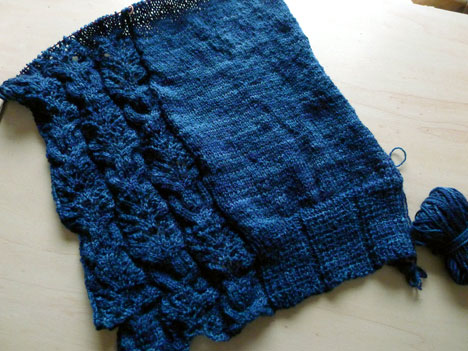 it started off well enough last thursday when i blocked my sleeve and had a good portion of the first front piece done. this is one piece that i did not prepare all that well before getting it on the needles—i was too excited to start working with the yarn, so i gave myself a bare skeleton of a pattern. the sleeve went fine, but once i got into the work of knitting the front, i began to think in more detail about the pattern and i realized that i may have goofed something up. but instead of fixing it right then, i stupidly decided to keep going for a little while more (i know; we ALL do that, don’t we?).

so i went back to the computer and my calculations and once i had it laid out in numbers, i could see where some adjustments would need to be made—including that it could be considerable narrowed in the body portion. 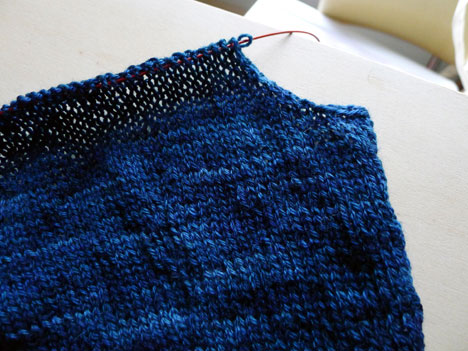 ok, i was actually this far into the armhole shaping by that time, but i definitely wanted it to be right. well, i thought, why don’t i just set this piece aside and start the second front to be sure i won’t want to go back to this one. there were actually several other things i wanted to change by this time so the decision wasn’t hard, but i wasn’t ready to rip out that much work just yet. 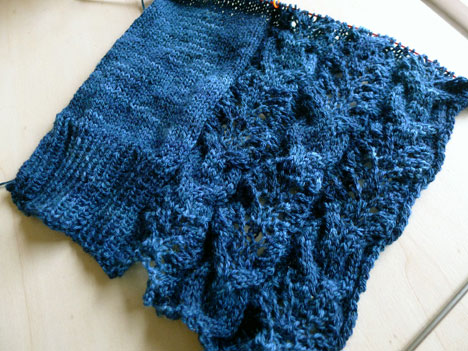 i started the second front and i could see right form the start that now i was on the right track. it would still need some minor adjustments but this was at least 100 percent better. 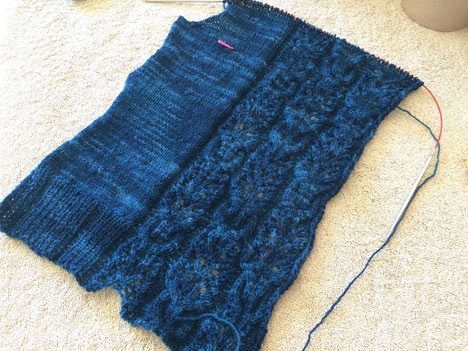 all went very well in fact—these lightweight sweaters seem at first to go slowly but surmise—when you sit and knit on them for a decent amount of time, they actually zip along at a pretty good clip. by yesterday at noon i had most of that new front done and was well on my way to the shoulder shaping.

i started my draft pattern and emailed the instructions for the back piece to the test knitter, karolyn, so she could  get started on a second prototype. 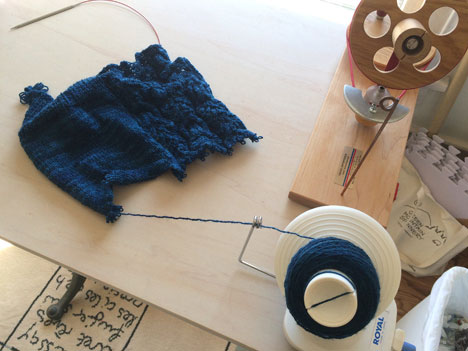 at that point, i went ahead and ripped back the first front—nothing makes me quite as grumpy as noncompliant sweater pieces, sitting around looking ashamed of themselves and pouting over their stupidity. off they go!

by this time i was very confident that i could finish up the draft pattern, so i spent most of saturday night and sunday doing that (i cooked and ran in between because after all, it was the weekend). 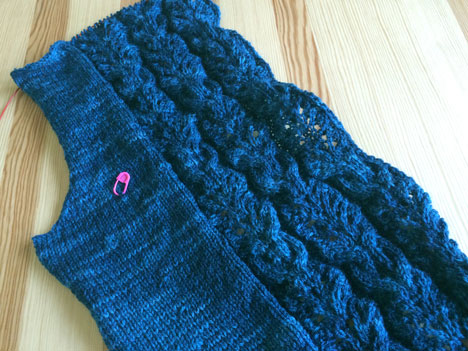 last night in front of the TV i got this piece all the way through the shoulder bind off and started the collar extension, but i had been one stitch off on the shoulder and that was bugging me. i put it down and went to bed and while trying to get to sleep, i thought it out.

i saw right away what the problem was and i wanted to jump up RIGHT then to fix it and email the tech editor. but i didn’t want anyone to think i was crazy . . . oh no—not that! hehe. 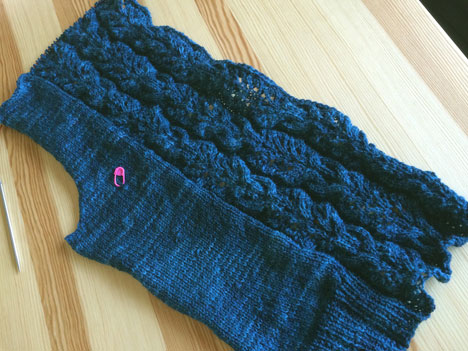 so even though i now couldn’t sleep, i just made myself stay in that bed and then first thing this morning, i fixed it.

and that’s when i did my next stupid thing. by the numbers front shoulder area was now off by three sts, which is a lot. in fact it is an amount for which i would totally rip back many inches to fix, because i am a stickler for a perfectly fitted shoulder and these will be too big if i let that go. however, i failed to remember that my stitch actual count was also smaller due to another adjustment i’d made earlier and was really only one stitch off.

for which i would totally just fudge it. 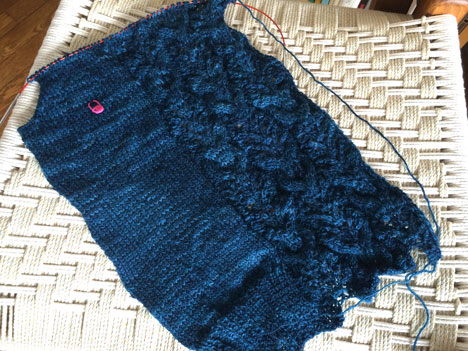 but i didn’t realize my confusion until AFTER i’d ripped back eight inches.

well, that’s my punishment for thinking about numbers before i’ve had my coffee; i know better . . .

good thing this beautiful spirit trail tayet is such a pleasure to knit with; i am enjoying every minute of work and rework on this sweater and i truly think that is one of the reasons i’m so willing to do it. wonderful yarn deserves to be the best thing it can become.

ok, i’ll be back with more in the next day or two and hopefully, something spicier.

18 thoughts on “kind of obsessed”