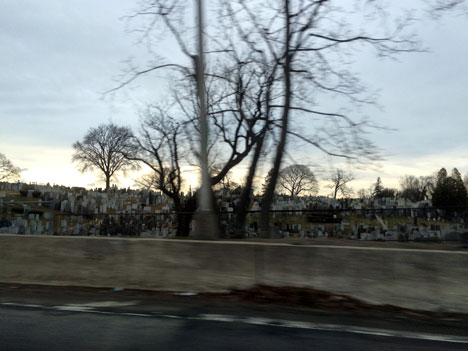 taking pictures out the car window on the way from the laguardia to brooklyn, we passed a series of cemeteries along jackie robinson drive. a peek into such a dense gathering of souls really drives home the sheer number of people who inhabit the city or whose life has passed through it.

i love cemeteries anyway, but then one that has the NYC skyline as its infinity point? wow.

to back up a bit, i opted for my early morning travel knitting to work on the languishing reversible crescent shawl i took along. 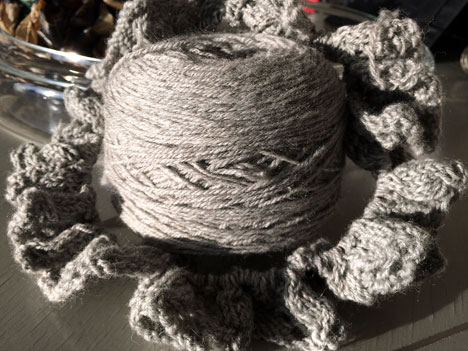 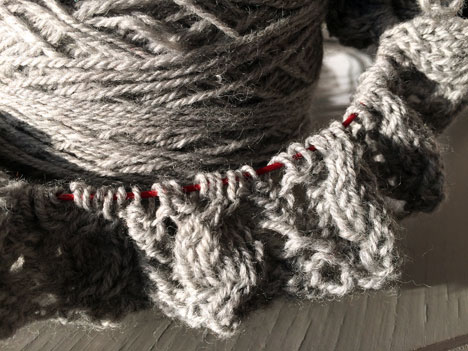 considering that my rows are somewhere in the neighborhood of three hundred stitches, i got a very good amount done—about ten rows (the flight is only fifty minutes). which is enough to make it feel like there is some substance to the knitted piece. for me, this is always a milestone at the start; with something to grab onto and act as ballast for my needles, my knitting speeds up a bit and a rhythm develops.

i arrived my friend nancy’s place by 8 am and had a lunch meeting set up, so i decided to squeeze in a park run to acclimate myself. it was colder than i expected, but not as cold as it has been at home; i was looking forward it. 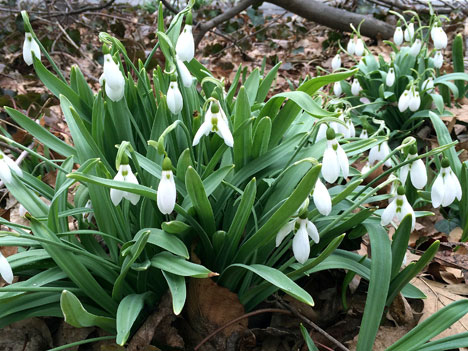 well, running sure does have its rewards.
on my second turn around prospect park drive yesterday, i spotted clumps of snowdrops dotting the floor of the woods close to the road. and once i noticed one, i realized there was, if not a carpet of them, a definite stepping-stone pattern to their presence. and so lushly flowered.

how i missed them on the first time around eludes me; is it possible they weren’t open yet for the day? 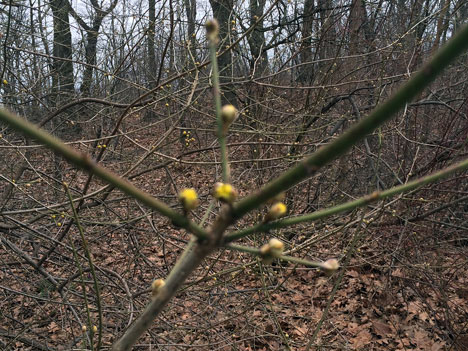 i started out on the west side which is darker and more heavily wooded, especially when the sun is hiding as it was yesterday morning. i tried to get photos of the forsythia buds which are but a haze along the branches in this chillier area. 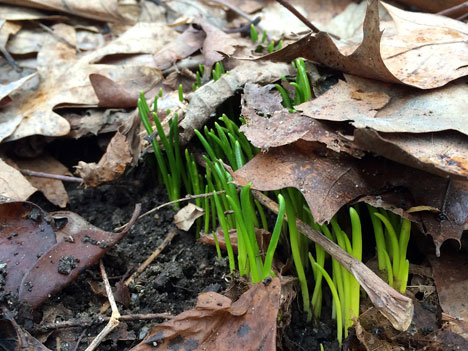 here and there i also located tiny sprouts of daffodils, poking out the thinnest of blades to push off their leafy blanket.

round about on the east however, the daffs held a much bolder stance and were even showing signs of thick bud. 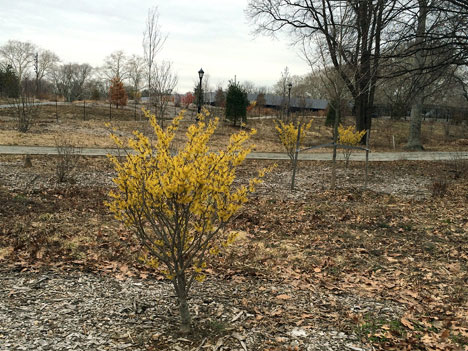 it was the same for the forsythia—with more access to open sky and light, they were breaking out in bloom. 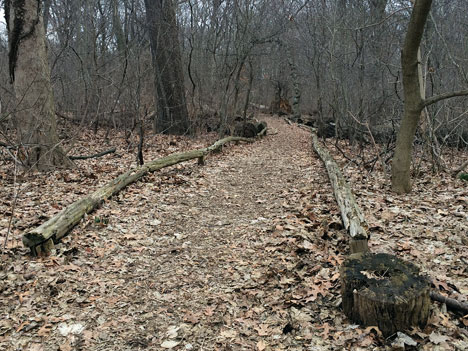 after my second turn i headed back for a quick shower and then off to a lunch meeting close by. wow, every time i visit park slope i can’t get over how it’s changed. this one of the things i love about the city in general—how it regenerates itself constantly.

after lunch my energy was flagging a bit so i decided to go back to the apartment to check email, knit, and maybe nap for a while. well, i got a little bit of knitting and email done, but my 1 am bed time followed by a 3:30 am waking time had definitely caught up with me and i was soon down for the count. 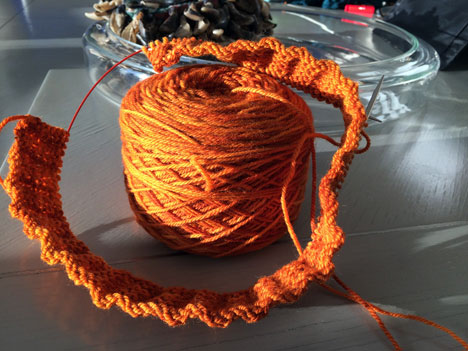 after a refreshing nap, the afternoon had begun to fade and as much as i wanted to work on my triticum sweater, i was having trouble seeing what i was doing so i switched to the mister’s design. no trouble seeing that in the dark! and isn’t it beautiful with the morning light catching each edge? 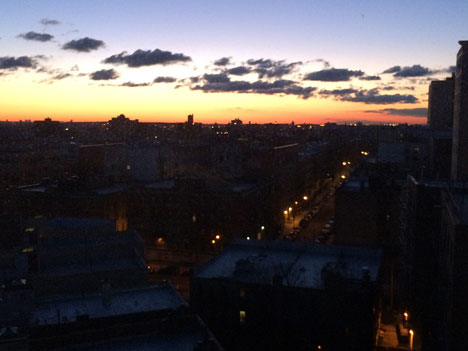 because i fell asleep fairly early for me, i was up at the crack of dawn and able to take some photos as the sun rose. 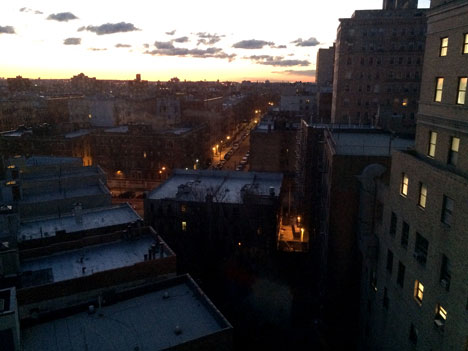 i love the view from nancy’s study, where i spent the night. looking east, out into the vast expanse of brooklyn it’s a shifting light show all night long and into dawn.

then the sun tips up over the horizon for real and the whole apartment fills with extraordinary light. talk about joyful—this yarn totally lives up to its current environment, haha. 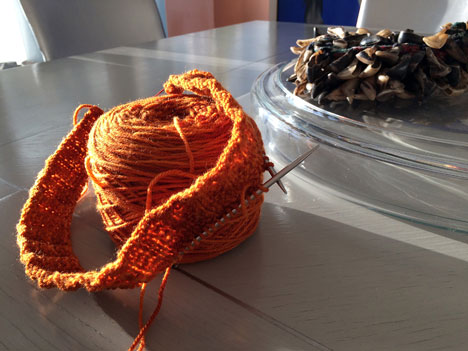 last night i cast on the big back piece and have worked almost all of its hem; a few more rows and i’ll be on to the body—my favorite part because i LOVE knitting that houndstooth texture pattern. 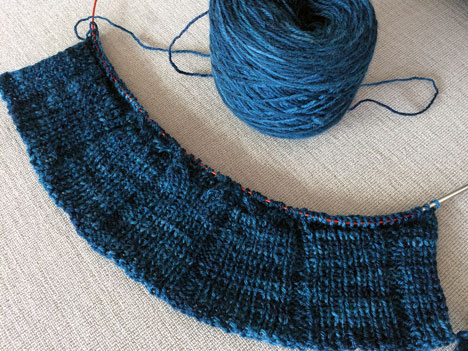 speaking of morning sun, now THAT is the time to work on a dark blue sweater, which is just what i did while chatting with nancy over coffee before she left for the day.

i finished the hem and got far enough to establish the body pattern—the back piece has a central panel which echoes the cable and lace pattern down the center front. that will help define the back waist area and provide a central focal point, similar to my leaving sweater design.

another yarn that simply glows from within. tayet is dyed on a 100 percent BFL base, so it’s totally made up of luster fiber, which works complete magic in deep blue when dyed by the masterful jen. 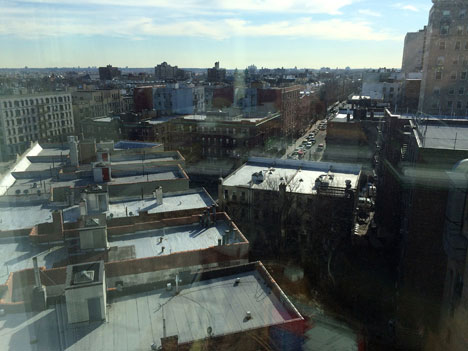 alright now, the day is in full swing and beckoning me to come out—time for a run and then later, a trip to the met. we’re meeting cathy, agnes, and donna for dinner tonight, too—SO looking forward to seeing them all!