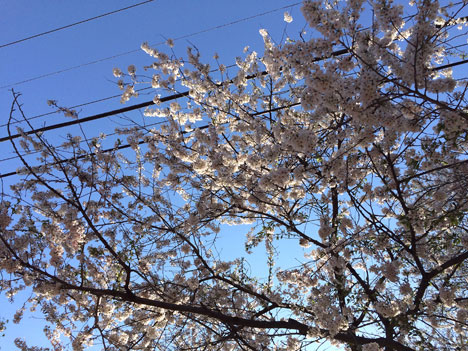 so, let me get this straight: david doesn’t blog for what, two years? and when he finally decides to show up he gets over two hundred comments??

maybe that should be my new strategy . . .

heh, as if i could keep my mouth shut for that long; you should be so lucky.

i’m not going to dwell on what all that means just now anyway—i don’t have much time. in fact this is going to have to be a rather quick post because i’ve got a sweater to finish by the weekend.

it all started last wednesday at knit night—when barb arrived i was riding an adrenaline rush of finishing up three garments all at once.

two of them—the mister’s in orange and the blue triticum—had gone out the previous day to visit their respective dyers (briar rose fibers and spirit trail fiberworks) and take a trip to the maryland sheep and wool show this weekend, where they will be displayed in each dyer’s booth at the show. once they were out the door, i finished up the seaming on my mister’s pullover (far right) which i had knit in the muesli shade of our better breakfast DK yarn (we’ll be restocking this shade in may).

BTW, we have put together a whole weekend blog event that is designed to be a virtual trip to the MS&W, so i won’t spend more time on the sweater news just now—stay tuned; the sheep and wool fun starts tomorrow. 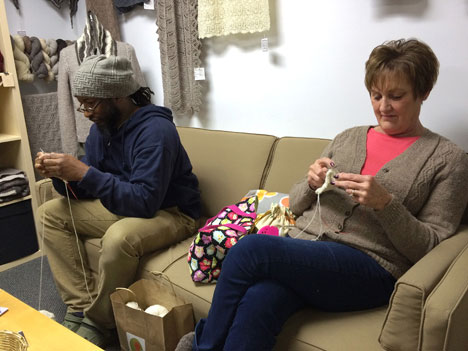 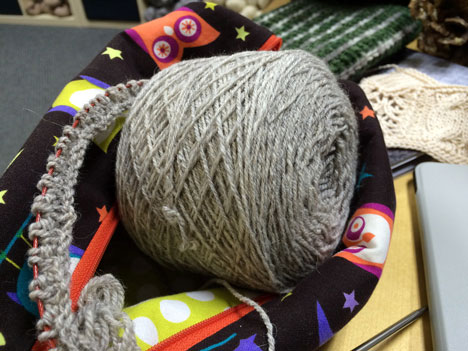 earlier that day, erica and i decided that i should knit my house sample in the porridge shade, which, along with the muesli, is a color spun from rose gray alpaca and few toning shades. this color family straddles the divide between gray and brown, offering a soft intermediate realm in the spectrum. and like anything that can go either way, its dual nature appeals to me for reasons both functional and aesthetic; these colors are at the same time mysterious and adaptable.

anyway, my plan was to complete another sample by the time the sheep and wool show starts—about nine days away at that point (and i still had plenty of pattern work to finish by then, too). 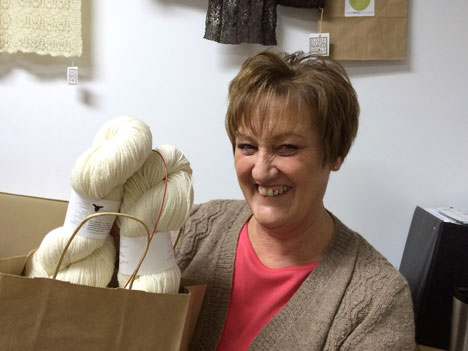 well, that’s all barb needed to hear to jump on the bandwagon right along with me. she grabbed four skeins of BBF in the sugarfrost shade (because her husband tom said he thought she should knit a lighter color sweater this time) and got right to work right there on her swatching. by the time she left she’d settled on size 7 (4.5 mm) needles and was casting on for her back piece.

my own start was slightly slower because, like i said, i had other pressing matters to take care of, such as finalizing the pattern so the test knitters could get started (you can see their yarn choices and follow their progress in the test knitting thread that barb has set up on ravelry).

i started with a sleeve so i could use it as my advanced swatch, because when i swatched on a smaller scale, i ended up in between two needle sizes. using a 4.5 mm made a fabric that was too loose and a 4.0 mm was slightly too tight. this dilemma is often resolved by knitting a slightly larger piece in the  actual patterns and that proved very helpful here. i settled on the 4.0 mm needle with the confidence that i could easily block my final pieces to the size needed, should they turn out a little smaller than expected. 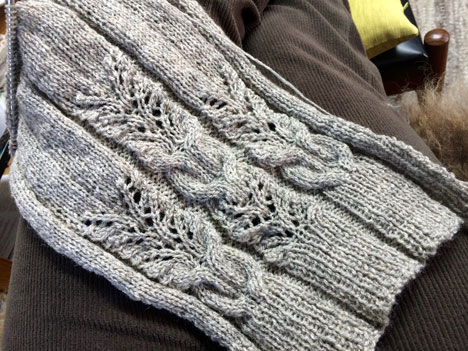 once i got a chunk of time to invest in knitting (friday, i think), that first sleeve was completed in less than a day, even with all the paperwork i had to get through (it helps to have a brilliant proofreader like anne marie to partner with; we work together like a well-oiled machine, for which i am eternally grateful).

i cast on right away for the first front piece, but knew i would have to divert my attention back to paperwork for a bit. on saturday i had to skip knitting to work more on the pattern, but it was time well spent and by the end of the day, we had it ready for formatting.

i didn’t waste any time . . . i got right back to work on that front on saturday night while we watched TV. i was able to get the hem ribbing completed before going to bed, which always feels like the hardest part to me. funny how three little inches seems to take longer than the remaining eighteen, haha. 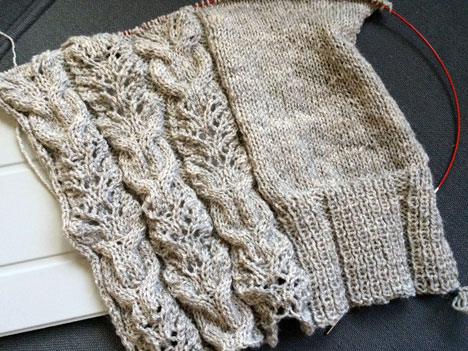 on sunday morning i knit quite a lot while sipping my coffee and continued into the early afternoon, stopping for a little while to take care of a few pattern corrections from anne marie and then work on the formatting of the final file. 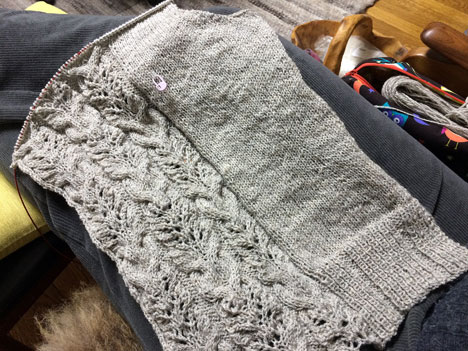 after a long walk in the late afternoon, i resumed knitting and completed the left front by late evening (or possibly the next morning; my photo journal has a gap here).

i think that’s right and that in my afternoon knitting class, i cast on for the right front, because by monday evening, i was taking photos of the right front hem (it’s all kind of a blur, i admit; i know there were a couple of nights in there that i fell asleep at the ridiculously early hour of like, 10 pm, then woke in the middle of the night and knitted til morning alongside david, haha). 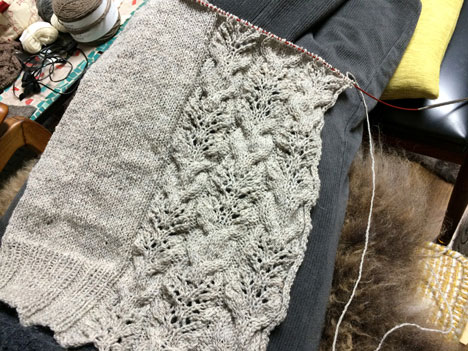 the fronts are a little deceptive in this garment because where most of the time, fronts are quite narrow and i could whip right through them, in this case they are nearly as wide as the back piece so they take a bit of extra knitting (but so worth it, because the showpiece lapel is knit right in).

by tuesday night (about 24 hours later) i had most of the right front done. i don’t even remember knitting so much. i have to say though, that knitting with this yarn is so gratifying that i just don’t want to put it down—as i work through the pieces, i can’t help planning what i’m going to knit with it next.

by yesterday morning, i just had to knit a few inches of the collar extension.

which brings us to one week later and knit night once again. i’d been getting updates form barb all week because she had set an initial goal of finishing her sweater by yesterday (hopeless overachiever, that one). none of us doubted she could do it, but pushing that hard can often cause a backlash and sure enough, she lost her mojo for a day or two, just when i was cranking on mine. 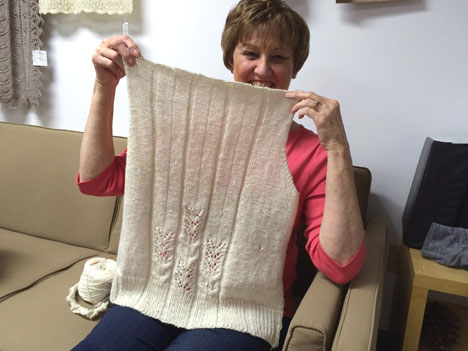 so by last night, we were pretty much neck and neck—she had a back, two sleeves and one front done. 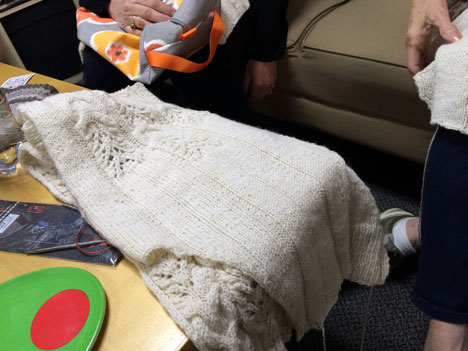 and we all marveled as she clowned around with them for the camera. 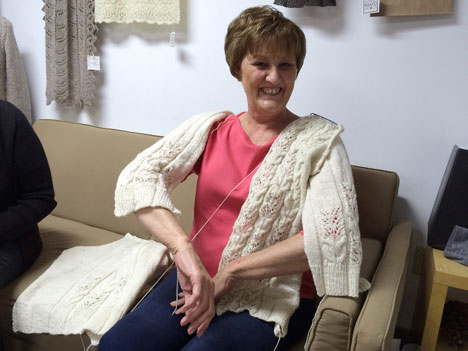 (seriously, you should come to knit night sometime—we have a LOT of fun!)

speaking of fun at the shop, that reminds me—our wooster weekend retreat will take place in about four weeks time and we are finalizing signups this weekend. if you wish to participate (and we SO want you to come!) please make haste before laura closes them down.

while she and susan goofed around with barb’s pieces, i got started on my back piece. 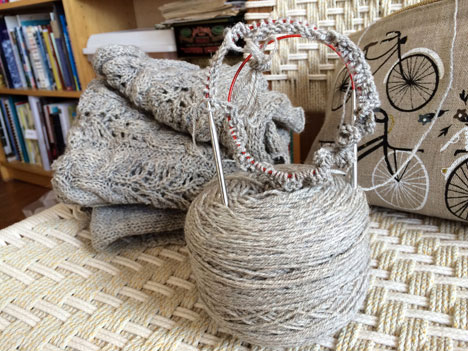 i had cast on for the ribbed hem yesterday afternoon, but as usual, was reknitting the first row for the fifth time as i wrestled with the impossible task of correctly counting to thirteen. 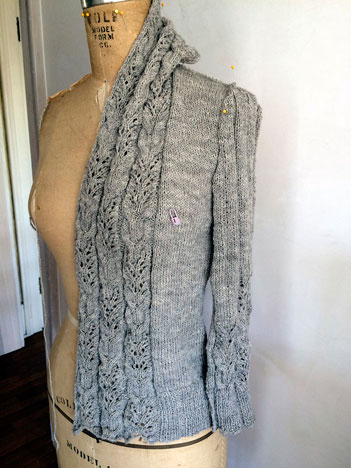 and i had a sleeve plus two fronts complete and though they don’t look their best in this unblocked state, i wanted to get a hint of how they’d hang together, so i pinned them to the dress form yesterday afternoon. i love the color for sure—it’s kind of a luminous, beach glassy shade of “greige” with its gray and tan bits mixing into a soft color of its own.

the piece shows every indication that once its blocked, it will drape not lovely, luscious folds, soft as a kitten. mmm.

did mention that we are both knitting the elbow sleeve option this time too? 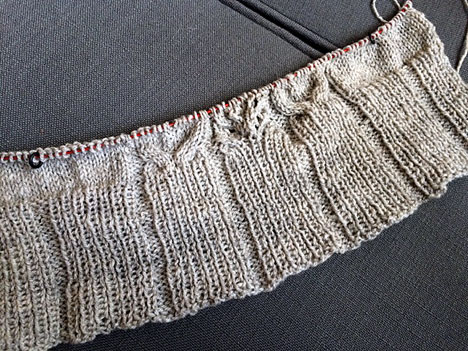 last night i got all the way through the hem ribbing and up to the first decrease before sleep overtook me. this morning i woke up early and got right to work while the coffee perked on the stove.

i know this post is kind of making me look like a crazy-obsessed knitter, but actually, the project has not consumed me every waking moment—the pieces knit up surprisingly fast, despite the lightweight yarn because the knitting is so enjoyable.

the cable and lace pattern is a lot of fun to work and is one of of those that keeps me wanting to go just a few rows more (that’s good in bigger projects). and of course, choosing a yarn that you love to touch and look at goes a long way to keeping a big project interesting. 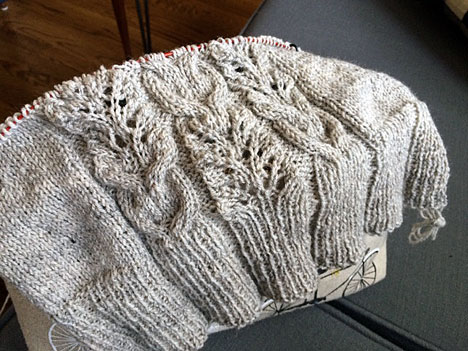 it’s still up in the air whether i will reach my goal of finishing this garment by the weekend, but think i could . . . if i get right back to work NOW.

so with that, i am bidding you adieu but i promise more excitement will be on offer every day this weekend. 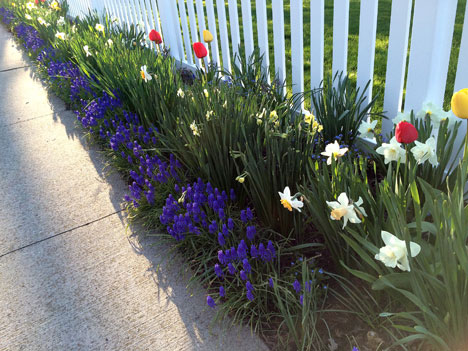