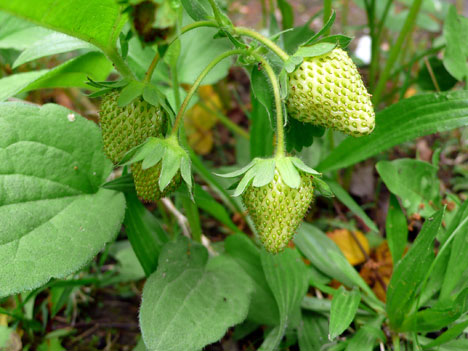 we are drowning.
well okay, maybe not drowning, but wow, we’ve had a LOT of rain this week. i wanted to get out to plant seeds in the garden when i got home from san diego, but it’s been a no-go so far, which is one reason we haven’t had a garden post in a while. 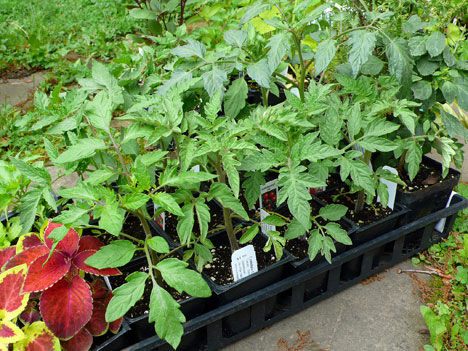 (the plants i bought sunday are lovin’ it; they were singing show tunes about rain when i went out to take pictures . . . i hope they feel the same once they’re planted in the ground). 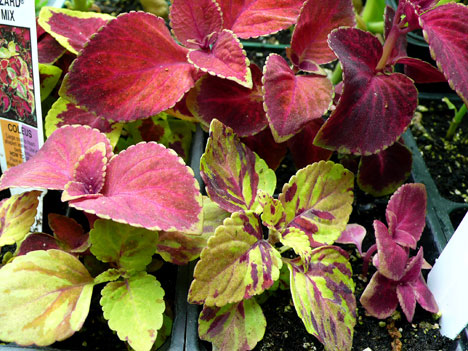 maybe later today . . . the sun has been out for a whole five minutes just now and if that keeps up, i could work outside for a while after i finish my pattern this afternoon. 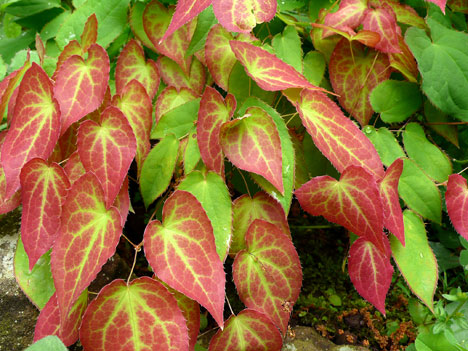 all of the perennials are showing off their best stuff right now—it’s that time of year when the leaves are new and bright and full, unscathed by slugs and dryness. epimedium are so gratifying to grow—they just get better every year and come in so many interesting varieties. 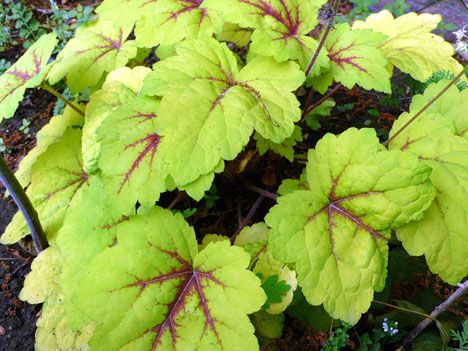 obviously, i like things with weird coloring and the added benefit of having them is that brighter plants light up the dark areas of the yard, even on a dreary day like this (or maybe especially on a day like this). 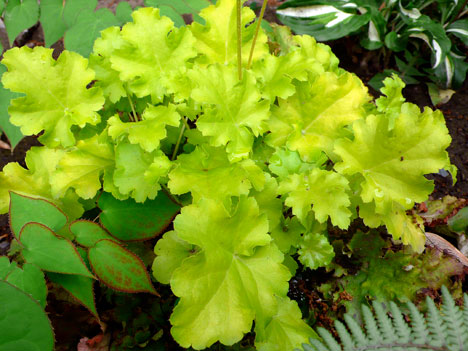 the huechera are busting out this year with their best displays ever (i have four or five different varieties out there). i think they’ve finally matured into the “fully mounding” plants they are supposed to be (i love how plant labels tell us that stuff, but not how long it will take a plant to achieve it). 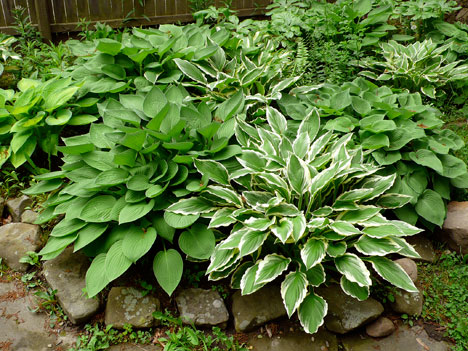 there is a LOT of green too, don’t get me wrong, haha. i try to break it up as much as possible without it looking like a circus out there, but the hostas dominate at least one area of the back yard and i like that. 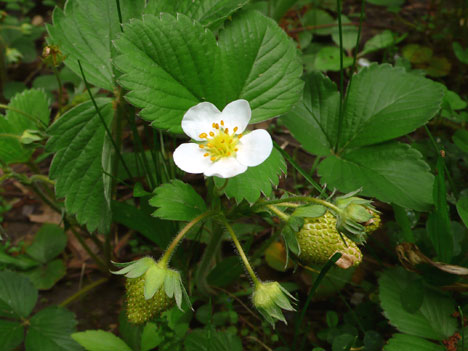 my plan to encourage the strawberries to spread outside the garden and take over our [so-called] lawn seems to be working—they have multiplied well on “the other side of the fence” and it looks like we can expect a nice little crop of fruit.

so that’s the garden today—so much bigger than the last time we visited it.

are you ready for the cuteness? not yet?
okay, we’ll look at some blocking shots first, because i know you like those, too. i finally finished campanula and yesterday, while it rained, i blocked it. 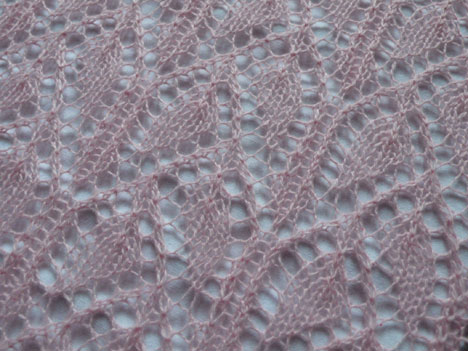 really, this cashmere lace yarn from great northern yarns is so beautiful; incredibly well-behaved and well-engineered. when i soaked it, all the spinning oil came out and it bloomed a bit and turned soft as a dove.

it is not a cashmere yarn that turns limp and lifeless when wet-blocked; it keeps its shape perfectly well and continues to show that fabulous stitch definition that makes this pattern pop. truly luxurious. 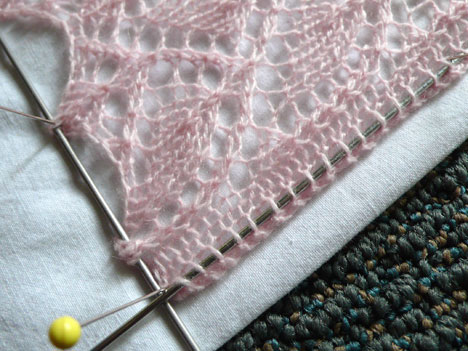 readers sometimes ask me how i use blocking wires; i think they can seem awkward when you are new to them. the answer is—patience. using the wires is not really faster than pinning; there is quite a bit of setup time involved (which i happen to enjoy). 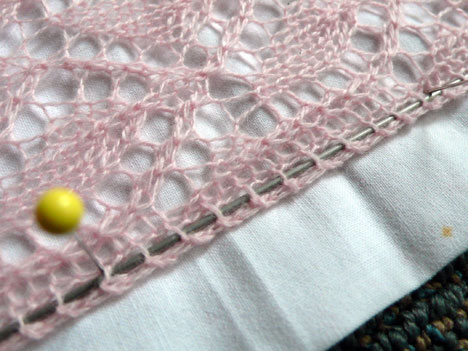 i thread the wires in and out of each row along the sides of the piece, which in this case are garter edges with alternating purl bumps, which makes working with a piece in very fine yarn a little easier. 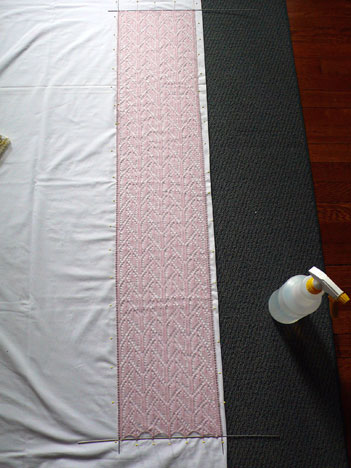 after pinning out a center point on each of the four sides, i just measure from the edge of the carpet to get one straight edge, then i pin out the others based on that one. i’m not really super picky about getting it perfect; life is too short. eyeballing the overall result works pretty well for me (but then, i’ve been measuring things for a living most of my life; i should have well-developed skills. hecklers, have at it).

it takes even very fine cashmere yarn a long time to dry and with the chilly, wet weather, the wait seemd interminable. but finally this morning it was ready. i unpinned the gossamer thing from its mooring on the floor and gave it a whirl on the dress form (and a few other places around the house). 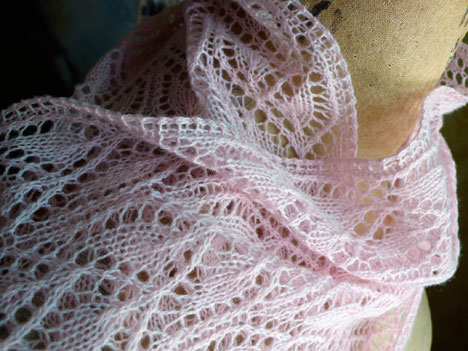 it drapes into the most luscious folds 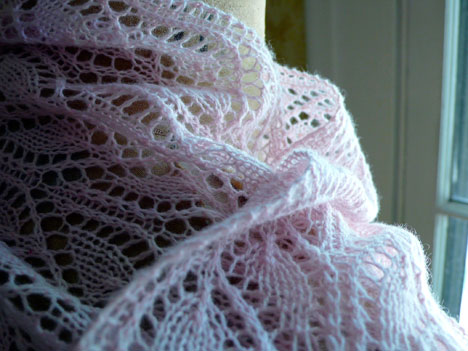 not the collapsing kind that get flat after a minute or two, but nice rounded ones that hold their shape, surrounding the form with lovely curls of pure softness and light 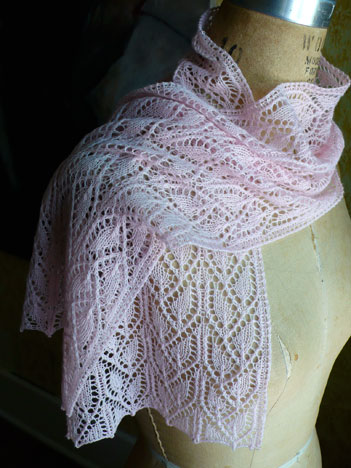 it has luxurious substance and yet 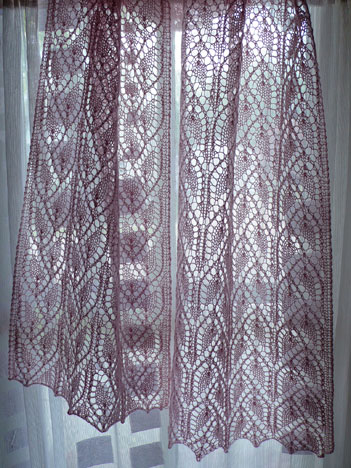 it is sheer as a veil.
hopefully we’ll get some nice modeling shots before friday; i’m trying to decide which pattern to release first, the port ludlow sock or this scarf . . . let me know which you want.

okay, need a little break after that? maybe a cigarette?
cuz i’ve got cuteness for you and i want you to be totally ready (we’ll wait). 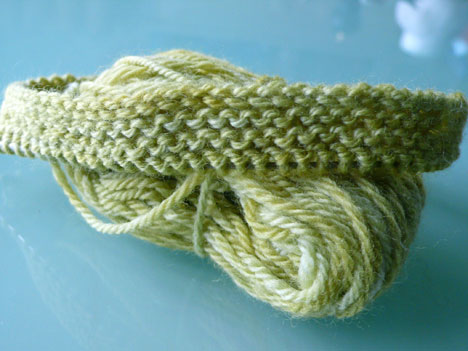 the hat i’m knitting to match the sweater is on the needles. i didn’t get all that far because it was very late last night when i started. i spent most of last evening finishing the sweater and this morning i sprang out of bed so i could block it (well, “sprang” might be an exaggeration, but i was excited). 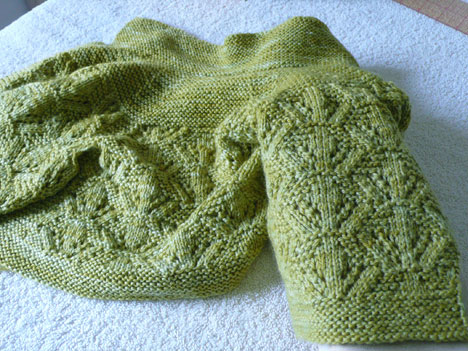 i decided a little steam blocking would be just right—even though this is knit in one piece, i was able to lay it flat enough, one part at a time, to block the openwork areas. 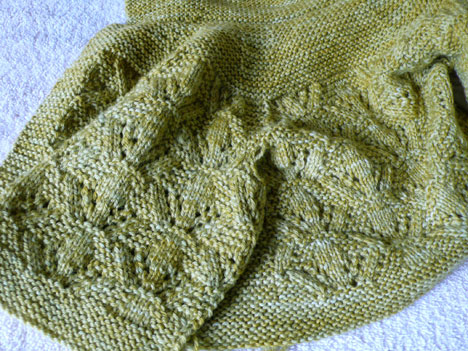 it still needs the underarm seams to be stitched up; i’ll do those this evening. i left the garter areas mostly alone, except for the collar 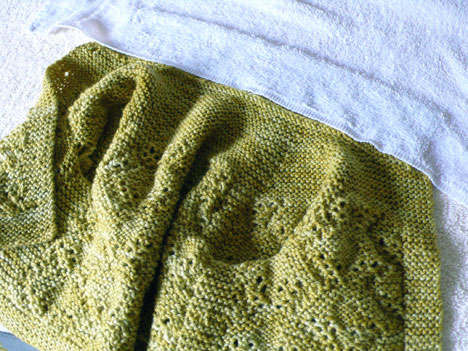 after it was all steamed and looking pretty, it looked even better than i’d been imagining it 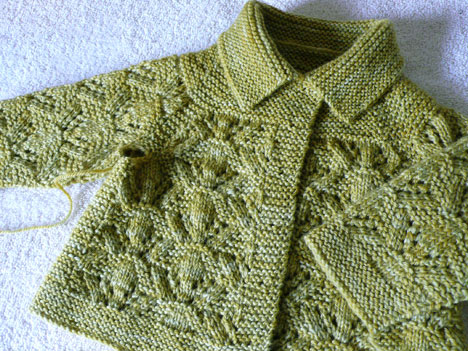 it needed buttons though, so i took out my myriad button boxes to see if i had something on hand. i don’t want buttons that compete too much with the textured fabric. 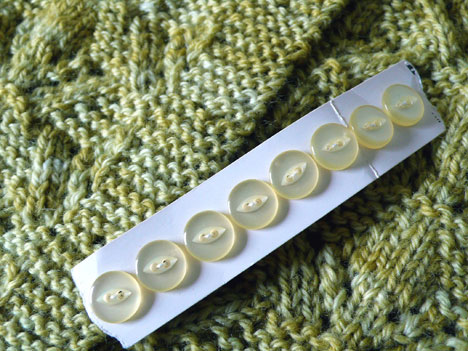 i found these, which i like a lot because they’re simple and they are a perfect match for one of the colors in the yarn. i’ve had them since the year one; i don’t even remember where they came from, but that’s the point of keeping a button box, right? 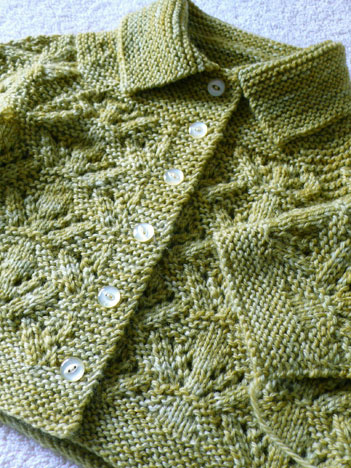 at this angle i like them a lot, with the light illuminating them. they seem plenty fancy and they glide very easily in and out of the buttonholes (important when performing this trick on a wriggling baby). 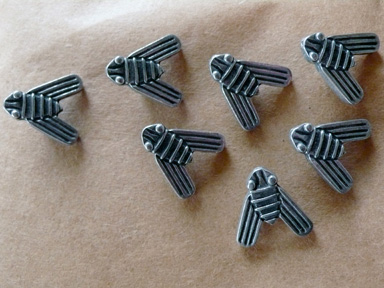 my other choice is very cute, but i hesitate—these perl grey bee buttons would be murder for a busy parent to fuss with (and maybe too textured for the fabric). on the other hand, they do lend a certain humor to the sweater and if i go with a honeycomb-ish name, they’ll be perfect. so i may use them just for photography in the end. 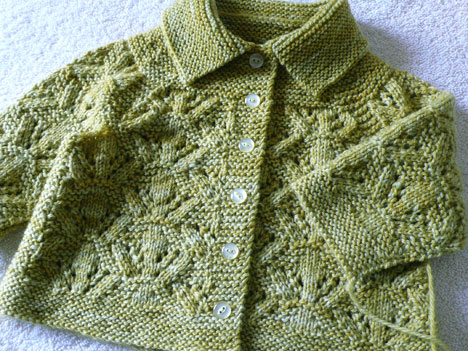 i dunno, what do you think? are these too plain? i love that they add a very straightforward touch to this jacket, like it’s saying: “yeah, i’m wearing lace, but don’t even think you can mess with me”.

but i digress; let’s get back to the cuteness—i WUV this thing!
it’s just what i wanted; now i have to think of a good name . . .

i’m working on the pattern and when i’m done, it has to go to tana for sizing and tech editing and after her, it has to be test knit. so it’ll be a little while before it’s published, but hopefully, not too long.

99 thoughts on “ready for cuteness overload?”