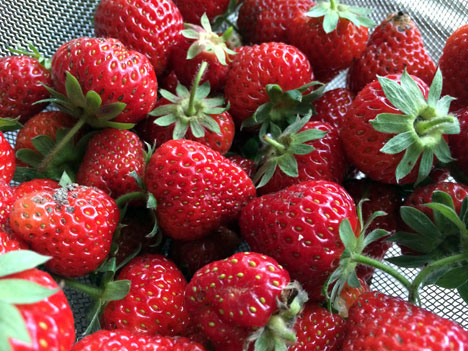 can’t believe how short a time i was home after TNNA. and yet, while i was there, the strawberries ripened to celebrate! 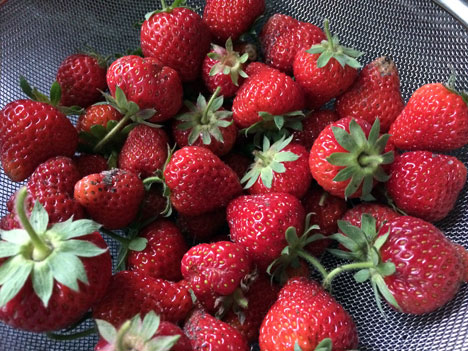 i picked three big bowlfuls in the four days that i was home—we have an amazing number of fruits this year in our little patch. the flavor is improving too, especially when i can leave them on the vine to ripen completely.

it’s a game of canny observation and precise moves at just the right moment to get the ripest berries before anyone else in our little garden kingdom gets at them. 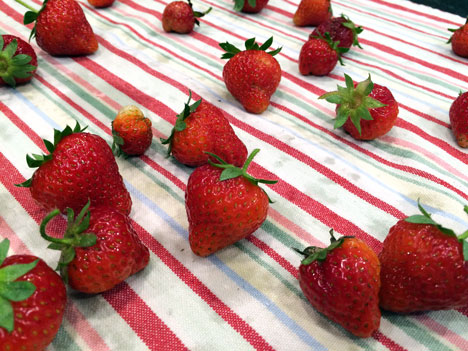 too early and they taste sour, even if we let them ripen indoors for a bit. too long and each berry has just a little itty bitty bite taken out of it.

not that i mind sharing AT ALL, but i do like to have a few for my yogurt while they are in season. i’ll be gone for the rest of the harvest, hopefully david will be lucky enough to get some. 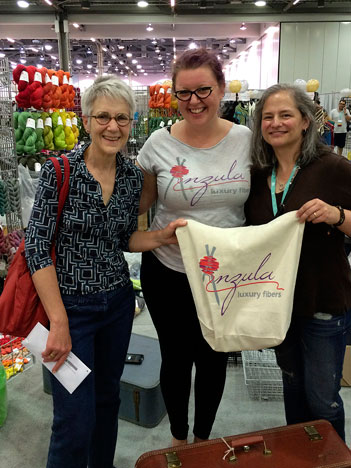 but let’s backtrack a bit. erica, rosemary and i spent three days meeting up with all of our lovely peers and the newest trends at TNNA, the trade show for our industry. i know TNNA was over a week ago now, but i’m going to tell you about it anyway because it was so exciting. i always get a lot out of going to the event, but this year was particularly—and surprisingly—fun and eventful, because so many cool people wanted to know all about bare naked wools.

who knew there was so much buzz?

we arrived on friday afternoon and after dropping our triticum sweater off for the fashion show, we immediately began a full schedule of schmoozing and being wowed by everyone and everything around the event.

first up, a stop on the show floor at anzula so rosemary could drop off some samples. around us, vendor booths were in all stages of construction (i almost said “erection” but then kim and kat would have spit coffee at their computers).

next up, we needed to grab a bite to eat before the evening events started. 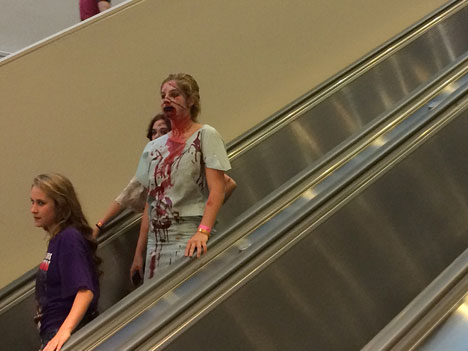 this wasn’t exactly what we had in mind though, haha. yep, simultaneous to TNNA, the convention center had scheduled a zombie convention! holy cow, this was shaping up to be a fun weekend. 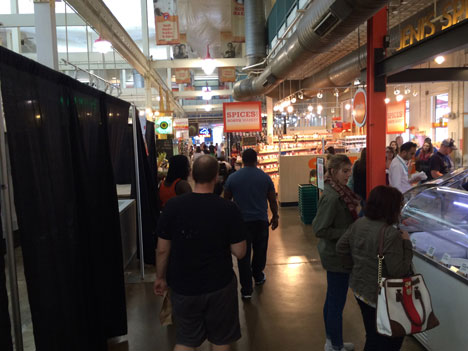 with not much time to spare, we hustled ourselves over right quick to north market and split up to get food from various vendors. fortunately the afternoon traffic had died down to a trickle and we easily organized some grub. 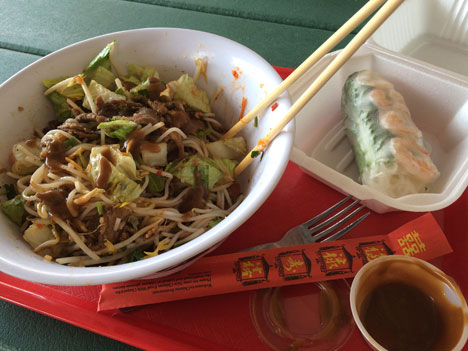 for me it is always lan viet—purveyors of yummy phó and rice bowls. in fact, i did not deviate my lunchtime agenda much throughout the weekend; i happily tried several dishes from this stand. 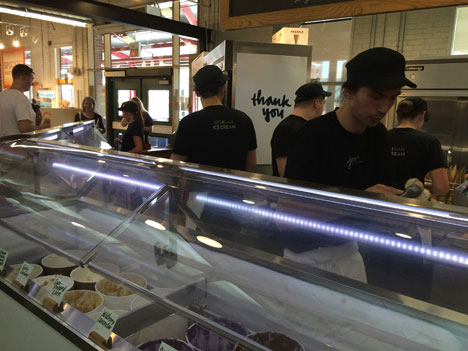 and what is a trip to north market without a stop at jeni’s splendid ice creams? ahhh, my rare indulgence in the stuff. i always feel a little guilty though, enjoying it without david; jeni’s is his favorite current brand.

next, back to the hotel to get ready for the fashion show (ok, that mostly involved napping for an hour, haha). on the way in, we ran into several friends from craftsy and chit-chatted our way into the room; we were too late to get a seat, but right on time to see the start of the show. 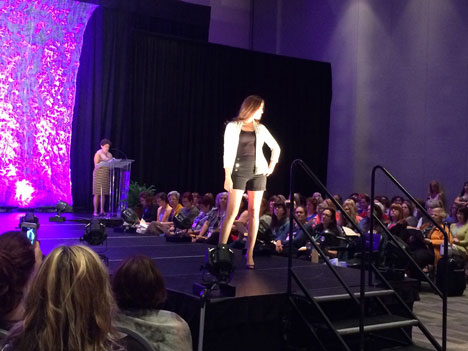 luckily, the models came down off the stage to walk each garment through the audience for a bit so i was able to get some nice photos; i know i’m biased, but i think it looks so pretty on her! 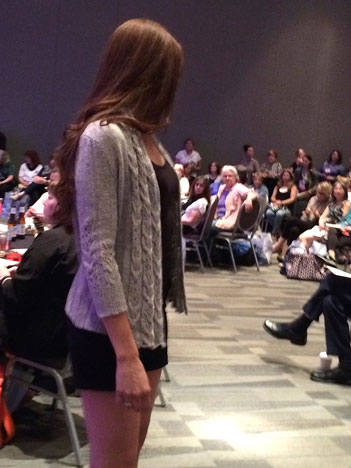 i love the way it swings as she walks.

that excitement over for the evening, it was time to relax and think about dinner. erica and i met up with christy and paul from shalimar yarns; it was so relaxing, i did not remember to take photos, but it was a lovely evening.

afterward, we headed back to the hyatt lobby where knitters always gather to socialize and knit late into the evening.

i was SO surprised and pleased to run into our old friend anne podlesak, with whom i had MANY wonderful collaborations, including the amazing experience of producing the bee fields shawl and honeybee stole. and a little shocked too, because she lives out west and rarely gets to ohio (if ever), so we had never actually met in person—hugs all around (we do a lot of hugging at TNNA)!

oh my, we just couldn’t talk fast enough! we decided to meet up on sunday morning for coffee and have a long chat. but we left her with our new 2015 shade card so she could get an idea of what we had been up to. SO good to see her; isn’t she adorable?

more social knitting for a few hours afterward; erica navigated her first thumb gusset on her creel fingerless mitts (to match the creel hat she made in the winter) successfully while we hated with other designers and yarnies. she is really coming along at developing her knitting skills. if you’d like to encourage her, visit her project page to leave a comment.

at the end of such a busy day (and week), we fell into bed and were asleep in moments. 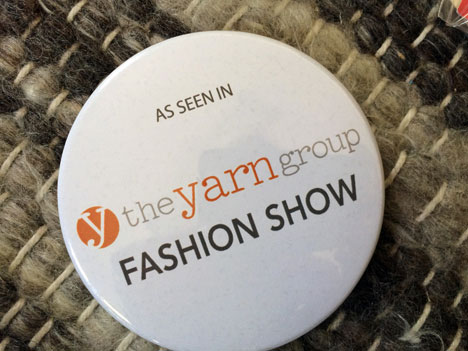 after picking up the sweater sample the next morning so i could wear it during the day, we hit the show floor. 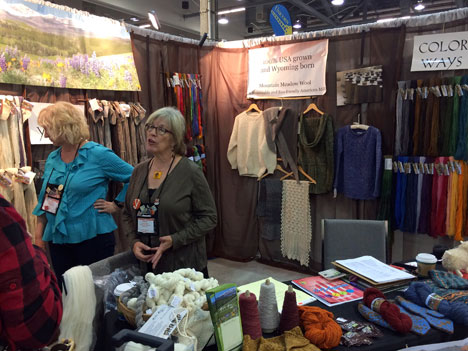 first stop was with mountain meadow wool, to chat about yarn and what’s been going on there. we had a great visit and are looking forward to some exciting projects with them. 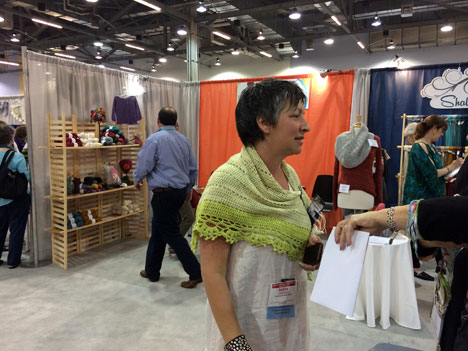 while we were there, our friend andrea (AKA yarn superhero) walked by and we pulled her in for a chat too. we made a plan to bring her to canton for a visit and a staff workshop, yay (we love her). 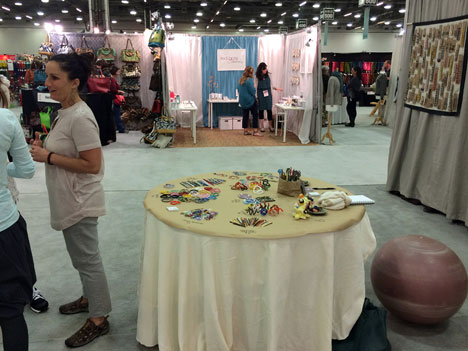 the incredible arraign from moving mud glassworks, who is always at the trade show, was our next stop and there, we drooled over some new selections and picked up some new stock for our button page.

throughout the day it was one new revelation after another; we stopped off at the stitch sprouts booth and were treated to a warm reception from designers andrea rangel, bristol ivy, heather zopetti, ysolda teague, angela tong, lindsey stephens, barbara benson, and more. everyone was so happy to talk about our yarns and take possession of shade cards and sample packs. we had many fruitful discussions about exciting future projects in just one stop.

aisle after aisle it was the same—many warm greetings and people bubbling over with enthusiasm for what we are doing.

it’s so interesting; our days at our home base, bare naked wools boutique (which i affectionally call “the ranch”), are filled with all manner of tasks that take us step by step into the future; sometimes it’s hard to see that we are making an impact. being at the epicenter really makes it real.

the day flew by in a moment and before we knew it the show floor was closing. i had an evening date to spend time with the craftsy staff and fellow teachers to share a meal and discuss the present and future goals of the craftsy fiber education program. 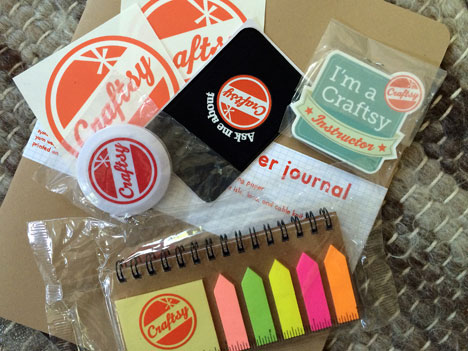 annother mind-blowing gathering of talent and expertise filled the room and for several hours, a “just us” atmosphere prevailed as we enjoyed dinner and shop talk together. my friend laura nelkin, along with stefanie japel, melissa leapman, patti lyons, carol feller, and faina goberstein (to name just a few), were in attendance; the level of professional status in the room was truly awesome.

after such an action-packed day, it was really great to meet up again with erica and rosemary to enjoy an evening of knitting in the hotel lobby. 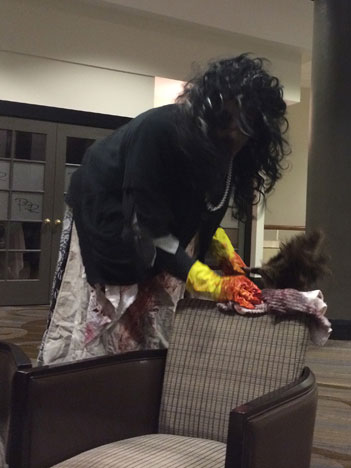 not that the fun ended there—this was the night when the zombie contingent came out of the woodwork to treat all of us knitters to a real show. the first few filtered in rather quietly, dusting and straightening up for the main attractions. this housekeeper spent quite a lot of time tidying up our area; i wondered if he really wanted to sit and knit with us. 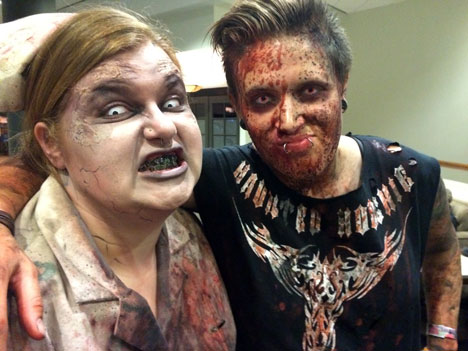 soon, the hotel was fairly vibrating throughout the evening as a parade of haunting characters took the place by storm (i must add though, that the knitters held their own throughout!). 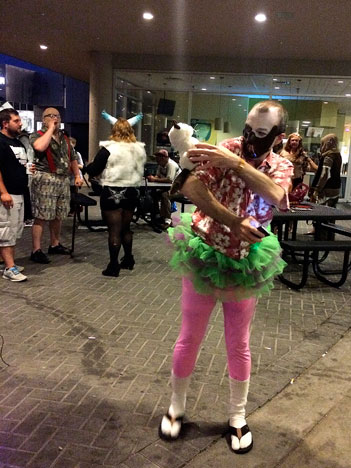 suddenly they were everywhere, a steady stream from seemingly every direction.

just when we thought it might be settling down, another amazingly costumed figure would appear.

i’ve never been quite so well entertained at TNNA, haha. and boy howdy do zombies love to have their photos taken!

i want to tell you all about the knitting i’ve been doing too; i worked on a secret project all last week that i can share now as well as my location this week. but i’ve talked enough for today and will be back with all of that tomorrow (i have to run out to pick up some groceries now, before it gets dark). 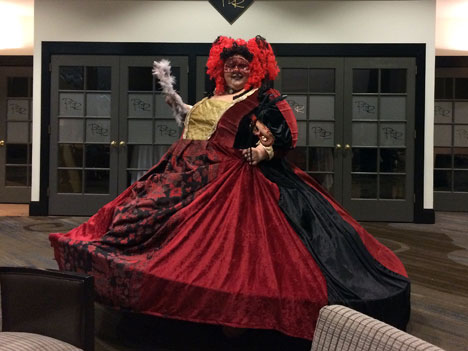