it took several days after TNNA to sort out and process all the many conversations and developments of the weekend. i had just barely begun organizing all that information when i realized it was time to repack my suitcase and get out the door to my next destination. 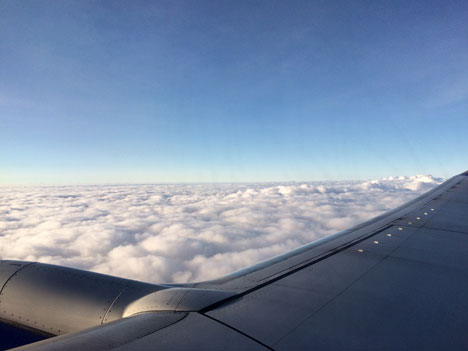 i had hoped to be a bit relaxed to start this trip but with a lot of knitting projects to organize, i was as usual, packing my actual clothing at the last minute and late into the night. and for the first time ever, i overslept a little in the morning and was almost late getting to the airport. it was actually a relief to get on the plane and up above the heavy clouds where the sun shone. 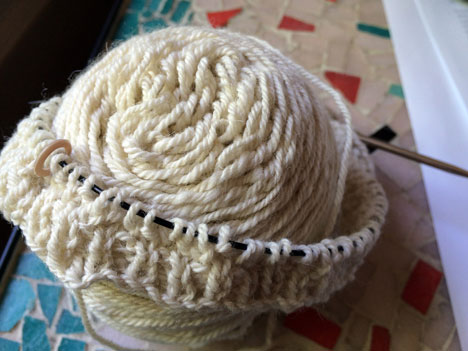 during the flight, i worked some on the little hat project i started last week. this luscious yarn is a sample of a new fiber blend for summer that we are crazy about. 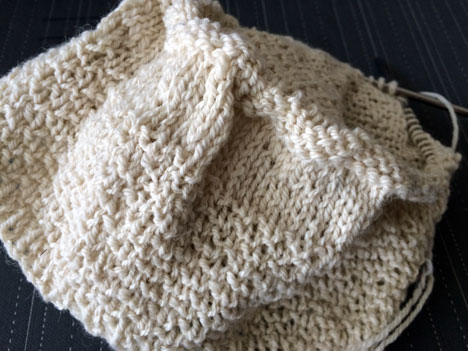 this little fartlek cap for baby eli will be the perfect test knit. the yarn is soft, soft, soft and since he’s still quite bald, that will be a plus. do you want to guess what the yarn is made of? first person to be 90 percent correct gets a free fartlek pattern (hint: it’s a blend). 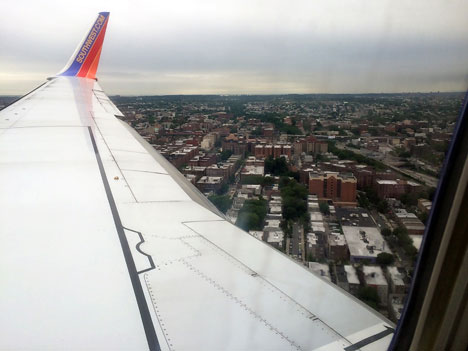 by total accident, during the descent i happened to get a shot at almost the exact same angle as i had during takeoff. can you guess where i am?

can you guess now? i bet some of you will . . . that’s right, i’m back in brooklyn. two months ago when i was here, i got SO MUCH accomplished that our staff encouraged me to do it again (or maybe they just like it better when i’m not underfoot, haha).

whatever the reason, i had the opportunity, thanks to my sweet, dear friend nancy, to come back on another self-imposed work retreat. i arrived friday to spend some time with nancy before she took off on her travels.

we both worked on friday and on then on saturday, i got up early and knit a bit on my sweater sleeve, while having coffee. 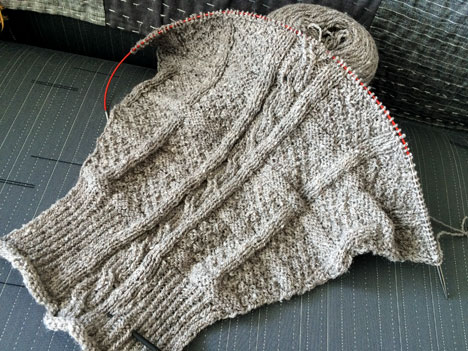 it’s coming along nicely at a relaxed pace; i’ve been juggling several knitting projects and lots of design work, so i’m not pushing myself too hard on this one yet. i’m sure i’ll pick up speed when i can devote myself to it fully, but in the meantime, i’m adding to it here and there. 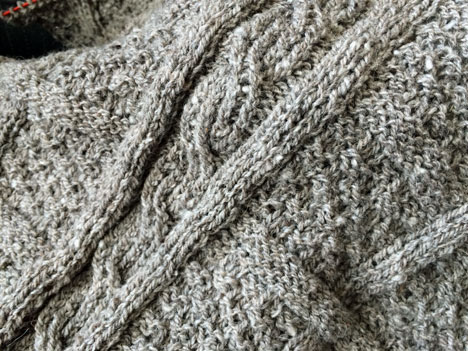 the fabric is such a close replica to my original that it’s almost scary; the only difference really is the shade. i can’t wait to wash the fabric; the surface will be wonderfully softened after a hot bath.

anyway, once i was fully awake and the day had warmed slightly, i went for a run which ended with a trip through the farmers market in grand army plaza. the day was overcast and drizzly, but not rainy enough to stay in. i picked out stuff for salads and a big bag of apples (which are fantastic, wow).

oh, i just realized that i need to back up a bit—i’m forgetting all about why you haven’t seen much knitting from me for a week or so. i had a secret project on the needles that i didn’t want to show you til i got to NYC

a few weeks ago nancy posted a photo of her recently completed wing o’ the moth shawl, knit in a teal lace yarn for her granddaughter. 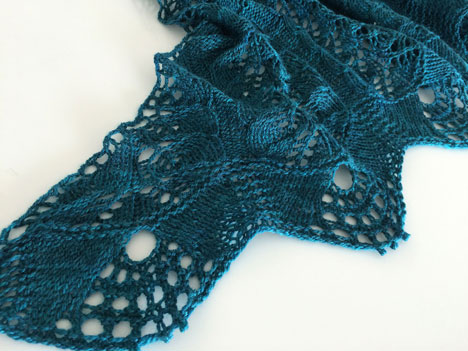 she was working on this project during my last visit and mentioned how much she loved the color and then when it was done, she jokingly said that she didn’t want to give it up. 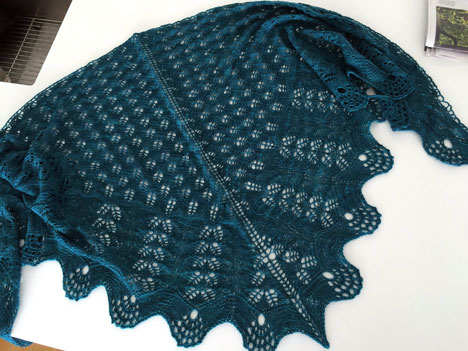 well, it is such a pretty shawl and dear to me because it was the first pattern i published on my blog, back in 2006.

so, i decided what the heck? i’ll knit her one as a thank you for having me stay at her place this week. but can you believe that the ONE color of lace yarn i didn’t have is teal??  . . . seriously. 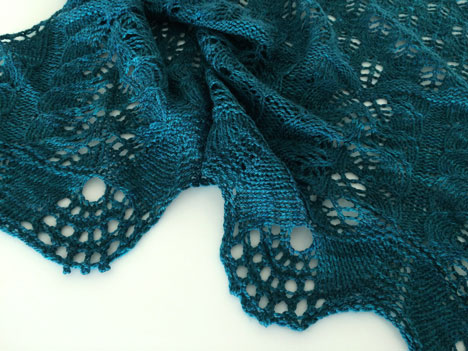 i wrote my friend jen at spirit trail fiberworks, because i thought her amazing nona lace yarn would be perfectly elegant for this gift knit. and i was right—just look at that soft, rich sheen; it totally makes the piece!

and even though she had JUST gotten back from maryland sheep and wool and had not unpacked her trailer, she found the perfect pair of skeins for me to knit the shawl in the mallard colorway. 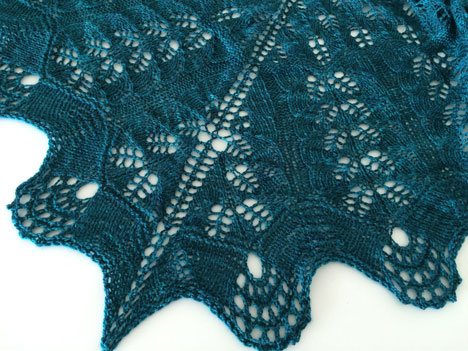 doesn’t that motif work out so pretty at the point? i love that bit . . . 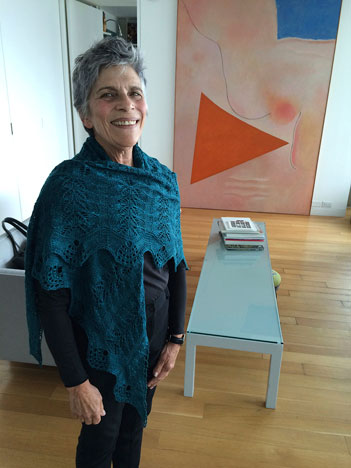 but i love nancy’s smile even better.

the shawl still blocked out to its intended generous size. most likely that is because the lighter, silkier fiber stretches more. 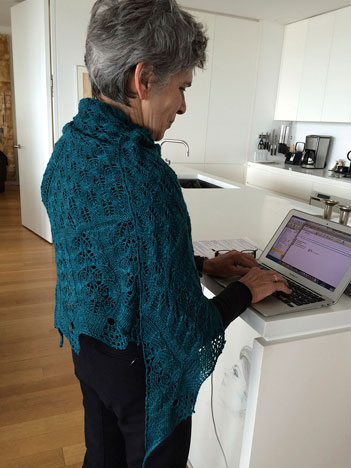 nancy wore it all weekend and took it along to spain as well—what an honor!

those first few days of my stay were a bit overcast and chilly, so it felt fine to stay in most of the time and get some work done. i have some specific projects i’d like to complete—most of them secret ENVY club designs, but also a few new items that i can fill you in on as the week progresses. i have a few people to meet with while i’m here as well.

and because it isn’t good to work the entire weekend, that afternoon we took a walk to the brooklyn museum to see the basquiat show together. the weather slowly, slowly improved and when we came out into the late afternoon, the sun had warmed a little and the sky was blue.

sunday was comparatively balmy, in fact and after my run i immersed myself in some design work for a few hours. after a bit i took a break out on the balcony to investigate an issue with nancy’s pine and ivy shawl, which she is knitting in our cabécou lace yarn (sel gris shade); a gift i brought her on my last trip. 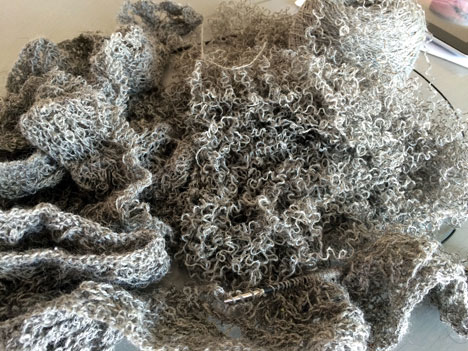 unfortunately, the problem was systemic, so i had to rip back a bunch. we laughed at how closely the pile of ripped yarn resembles a goat. but it’s spectacular in the light, isn’t it?

the trick to ripping back lace is to not do it right away—wait a period of time (like overnight or longer) and the stitches will take a set; they won’t run away from you in a slithery mess when you rip. better yet, mist them lightly with water and let the fabric dry well; they will hold their shape really well.

the whole operation took about an hour—a few minutes to rip and then a bit of time getting the 400-plus tiny stitches back on the needles, then counting to make sure they were all there, and then making sure each was wasn’t twisted. now she is all set to start the section over. 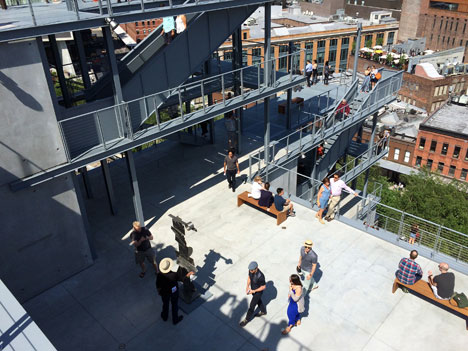 later that afternoon we were off to the city—nancy wanted to show me the new whitney museum in the meat packing district, which just opened a few weeks ago. 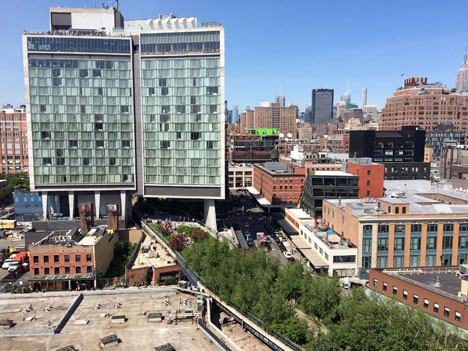 situated at the end of the high line, the museum offers staggering city views from outdoor spaces on every one of its six levels. swank hotels and shops are popping up throughout the immediate neighborhood for better or for worse (hopefully mostly for better and it won’t become another shopping mall). 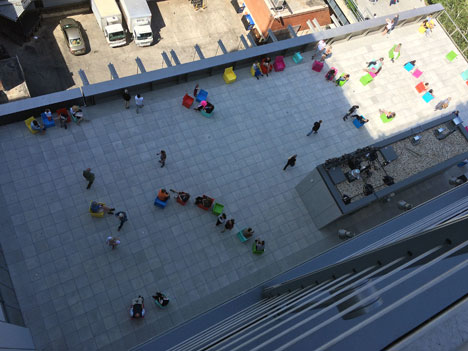 the views from every floor put up pretty strong competition with the museum’s contents, especially on a stellar day such as this one—so welcome after the dark, chilly days preceding. 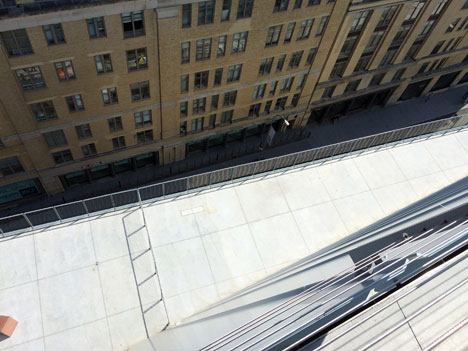 some of the site lines and angles parallel works in the collection so strongly, it makes me think the building was constructed for that purpose alone. and why not? would it really be so farfetched? 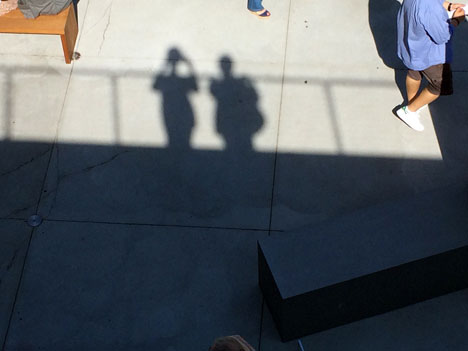 i know a couple of fans who would love such an inspiration for a building.

i adore going to museums and galleries with fellow appreciators; i SO enjoyed this weekend with nancy.

we couldn’t have asked for a better day—between the balmy weather and incredible paintings, photography, and sculpture you wouldn’t think we could ask for more.

but wait, there IS more!

there’s cathy—and donna (we didn’t manage to get a photo of her, darn it) 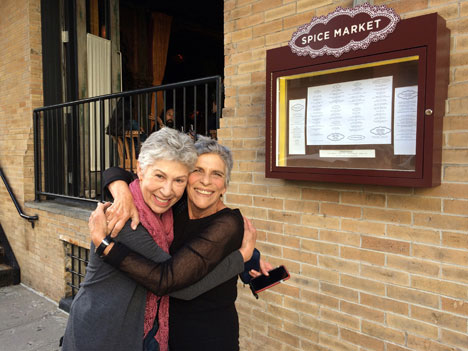 but the feeling is the same—good friends make for great happiness.

alright now, that’s enough of me running on—time to knit. i’ll be back in a few days with an update on what’s percolating here.

23 thoughts on “the friendly skies”