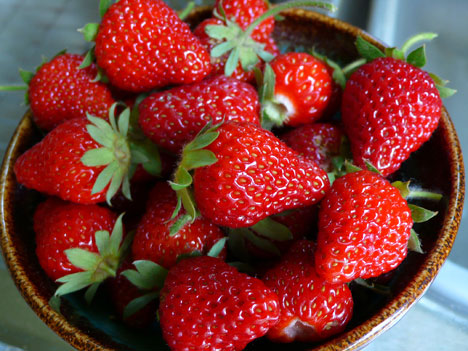 i know i said i’d be here this morning and here it is 10 pm or whatever—sorry!
i had some computer issues earlier on (some kind of software conflict or other) and i really needed to work outside today, so i bagged the deskwork in favor of the garden. 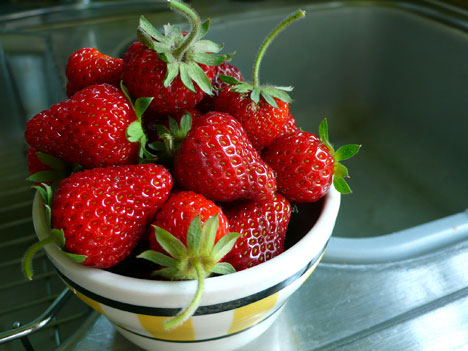 and look what i got, haha; our first measurable crop of strawberries.
i was so tickled with the bunch that i posed them in a variety of bowls for photos. do you think that makes me a garden geek? 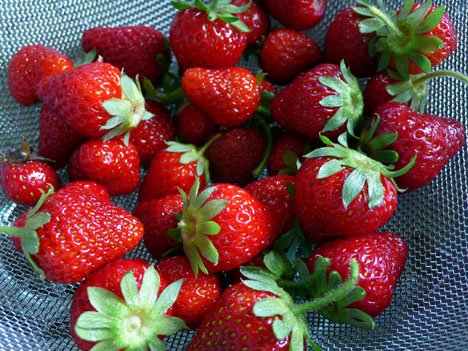 ok, i know you’re waiting to see who won the book, but can i just say?? that was a stunning number of comments, you guys; i wish there was a copy for each of you (well, there is, but 571 of you will have to pay for it or get it as a gift, sorry)

the winner is: YARNDUDE
and you know what? i’m really glad it’s ending up with him, because when i went to his blog to see what he’s up to, it turns out that this week he’s graduating from college, too. so it’s sort-of a nice reward for a worthy effort, don’t you think? 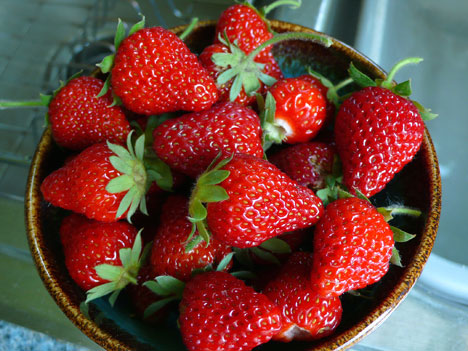 (i promise, that’s the last one for a while, hehe)

BTW, the reason i don’t have stitchionary 4 is because that is the crochet volume and i don’t really crochet much at all any more. i have enough crochet dictionaries for my purposes.

many thanks to sixth&spring books for their generous giveaway; we really appreciate it.

so yeah, i needed to work outside today and if felt appropriate—nothing like a national holiday for getting away form my desk and spending time in the garden. 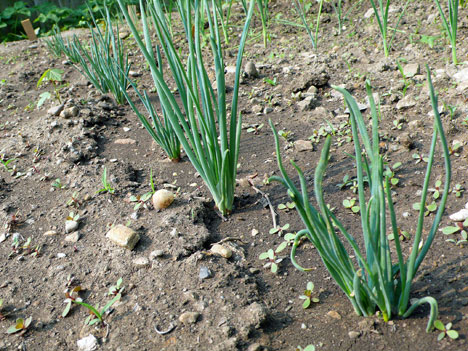 it’s been twelve days since i planted all the seeds i wanted and the results so far are mixed. shallots, chard, and other greens seem to have sprouted well and are off to a nice start. beets are a little spotty, but not too bad; i think we’ll end up with as many of those as we need.

okra, carrots, and parsnips are a wash—i dunno what happened but the showing isn’t very good. same for green beans (and really, what could be easier to grow than green beans??) 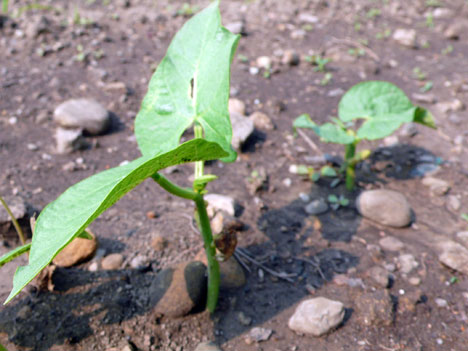 but there you have it; just three or four plants so far. i reseeded each of these vegetables a little more heavily in a row lying just parallel to the original row (in case the first sowing does make an appearance).

hopefully that will work and this little guy will soon have some mates. i’m too paranoid to wait and see . . . it seems in our garden that there is a prime time for seedlings to take off and if i wait til later in june, it won’t happen. 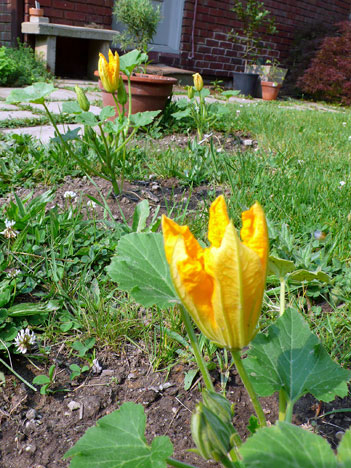 meanwhile, all the plants i put in as starts are going great guns—my squash, tomatoes, peppers, and eggplant are getting big and beginning to flower. hey—even the asparagus are coming up; every one of them, from what i can see. just think—this could be the beginning of success. 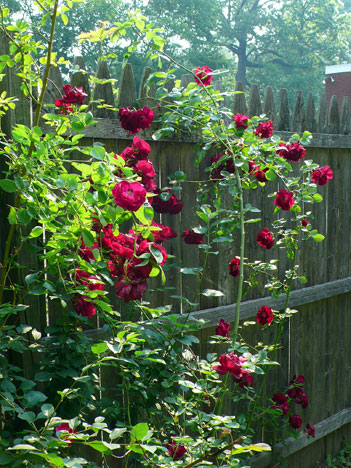 on the other side of the fence, our red rambler has broken into a shower of large, sexy blooms in the last day or two—really spectacular, especially in the morning light. it’s been very hot and muggy this week, which i didn’t notice as much out at the fairgrounds as i did at home this morning (you can see how hazy the sky is in the picture). 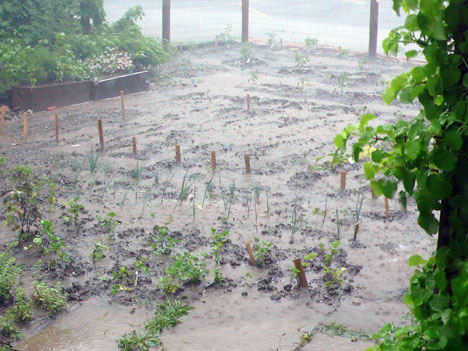 the heavens opened and poured down the kind of rain we only see here in the midwest—with all the shrieking fun stuff that goes with it. we needed it so badly—all that standing water you see was absorbed into the ground in very short order 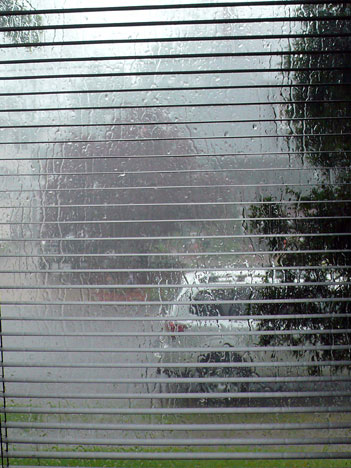 that meant a hiatus from the garden, at least for a bit, so i went back to my desk and sorted photos from my weekend to share with you. 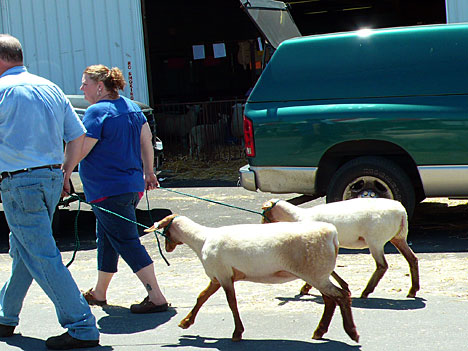 this was the weekend of our annual regional sheep and wool show—and this year i taught classes on both days of the event. 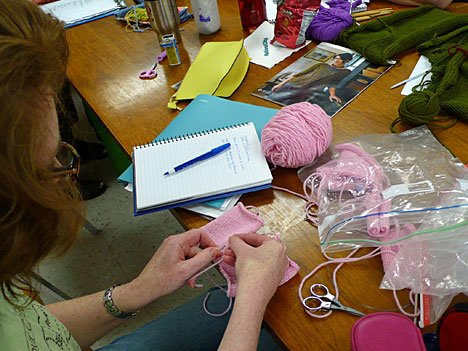 this is from sunday’s finishing class, which was a LOT of fun and really productive 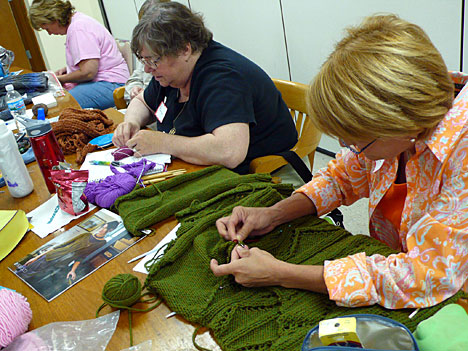 just look at them go—nothing like a row of stitchers hard at work, if you ask me, haha. we did blocking, too and learned some new tips and tricks for wrestling those finishing projects into submission. on saturday we did sweater fitness all day and though i have no photos (bad me), i can assure you it was equally fun. 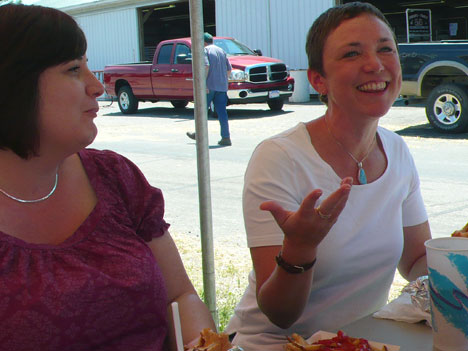 jocelyn and her SIL, geri came out for our event and we were thrilled to accompany her through her first sheep and wool event. obviously, wool fumes do wonders for her . . .
(geri has a blog, too, but i can’t seem to find it, even on jocelyn’s blogroll; hmm) 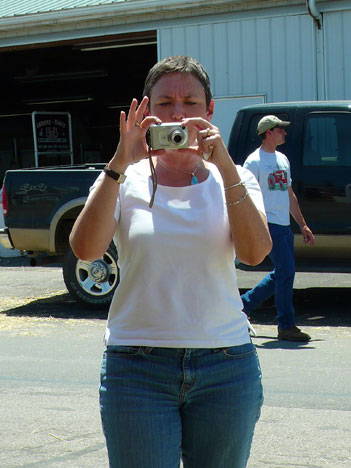 i even have evidence that jocelyn planned to blog her experiences here. 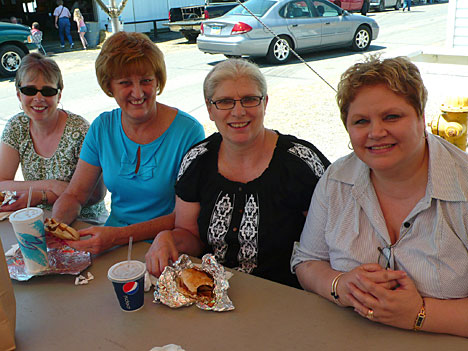 i managed to get outside the classroom long enough to spend time with her and my spinning class—look at them; do they look innocent to you?? 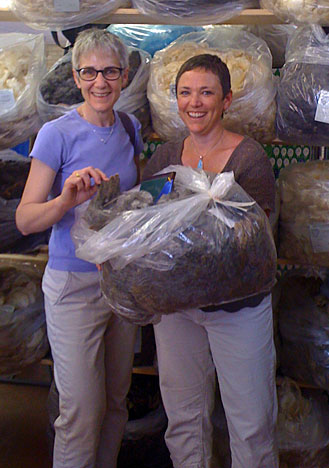 apparently, i cannot stay out of trouble either, no matter how many pep talks i give myself while standing on front of my all-too-full fiber closet. in the process of helping jocelyn select and buy her first raw fleece, i managed to agree to “split it” with her. 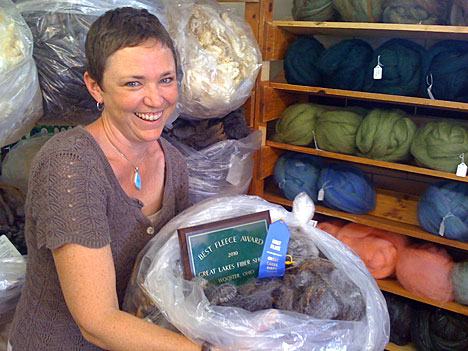 we couldn’t resist—it was a gorgeous coopworth AND it won best in show. 15 minutes before the fair closed, we were perched like heckle and jeckle at ten paces with one eye on the fleece, maturely discussing how we’d sleep on the decision and come back in the morning.

then, a woman approached the object of desire with hands excitedly outstretched and we lost it. we ran over and secured the sale.
we may have shouted.

the woman turned out to be the producer who raised this fleece and her excitement was all about winning the prize. we weren’t even embarrassed—just relieved.
we are SO lame . . .

after we recovered our composure and became ourselves again, we headed over to the briar rose booth to pick up chris and christy for dinner. we spent an all-girls evening on the olde jaol house patio, gratefully downing food and spirits. 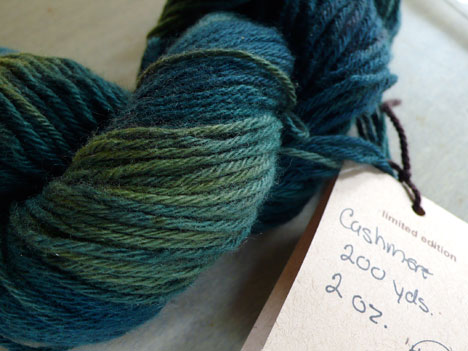 chris gave each of us a pretty skein of her new cashmere yarn—it’s positively dreamy.

back home, i hardly did any knitting this weekend—just a bit at night before collapsing into bed. i worked on my secret project one night for a little while, then moved on to my little shawlette for TV knitting 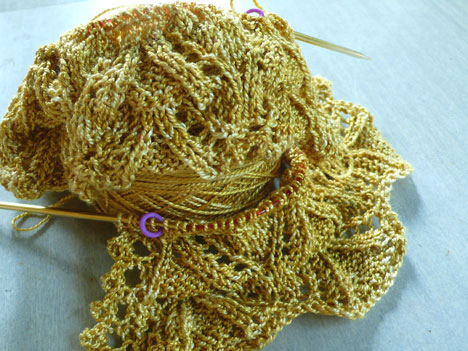 it’s knitting up very quickly; i’m on the second repeat of the hem section. and it gets smaller as it goes, so i don’t anticipate this being on the needles very long—i might have to knit a second one. 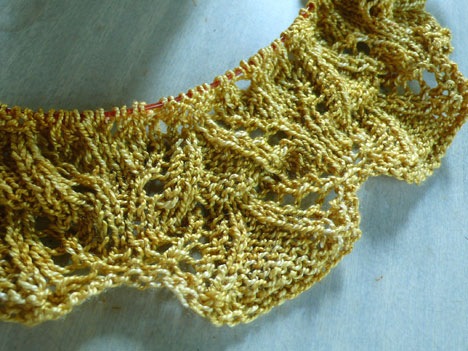 last night, after the show was over, i swore i would just knit easy stuff that did not require a brain. but then i got thinking about my next baby blanket in fearless fibers MCN luxury and how much i wanted to get it on the needles. 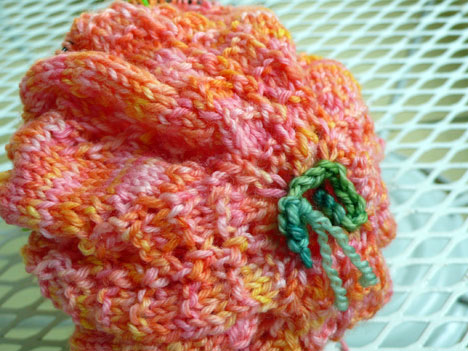 so i finished up the chart i had underway and cast on—just like that. i figured, it could be my second swatch and i think it’s working out ok. 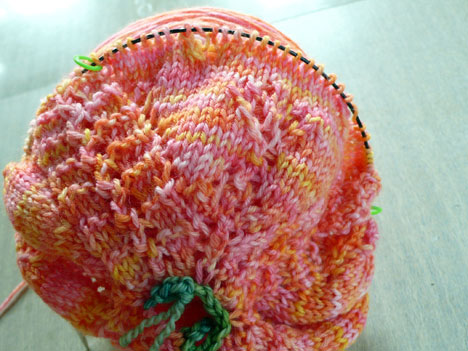 i’ve got rosebuds and a corner panel i love . . . and don’t even get me started about how much i like the yarn—it’s perfect—lightweight, soft, and such a cheery color.

this morning when my computer froze for the 13th or 27th time, i walked away to work eight more rows and closed off the starting point at the center, just to make myself feel better (it worked).

(we’ve been having an issue with carbonite; we love the backup system, but it doesn’t play well with our apple system software, grr)

so that’s about it for knitting . . . actually, that’s a lot more than i felt like i got done this weekend, considering. we did get out to do some garden work toward evening; it was a little wet, but not too bad. we put down the soaker hoses and got half the mulch down as well, before it started raining again (it was also getting dark). 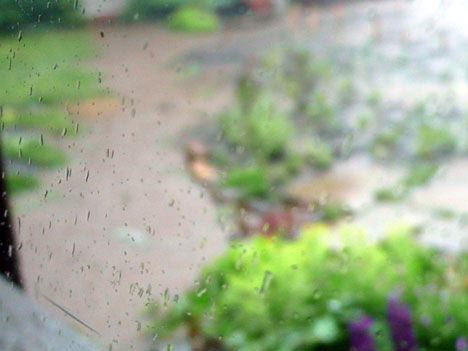 it was really a rather piecemeal day, but very productive, too. i like that.

it’s supposed to be fairly nice tomorrow afternoon and evening so i’m planning on getting the mulch finished; it looks like we have a week or so of rain ahead, so it would be prudent to get out there and get it done. 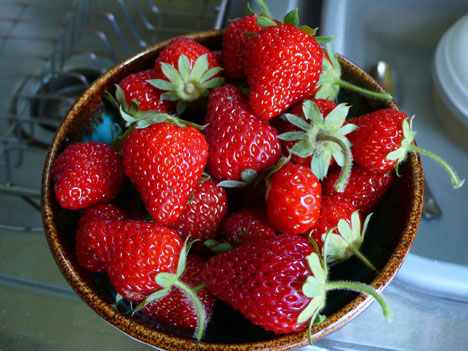 37 thoughts on “life’s a bowlful of berries”