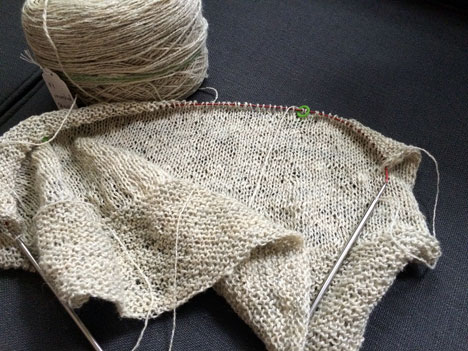 ahhh, i’m back to the soothing tones of knitting on my hemp blend shell project.

i laid it aside for a few days last week in order to finish up a large secret project i was eager to complete. i’m like that—while i love to have several projects going at once for variety, once i find myself in the home stretch on something big, i just want to get it off the needles and see how it turned out.

i wonder; am i like that because i’m a designer and every project is somewhat of a mystery until its completion? i don’t really hear anyone else talking about a bad case of finishitis, but i get it all the time. in fact, i often shilly shally about starting a project when i’m not absolutely convinced i have my strategy in order. 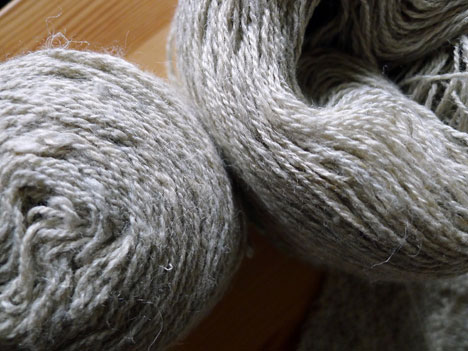 of course, a great yarn can serve to mask many, MANY misgivings and even lead me to knit myself into a corner from poor planning. not the case here, thank goodness—i am more in love with our new hemp yarn each day AND the shell is progressing beautifully, though i really did throw caution to the wind and cast on without much of a plan (it’s a simple shell, for heaven’s sake!). so far all the parts are falling into place without a fight; sorta sets the exact tone i wanted with this piece—fresh and uncomplicated. 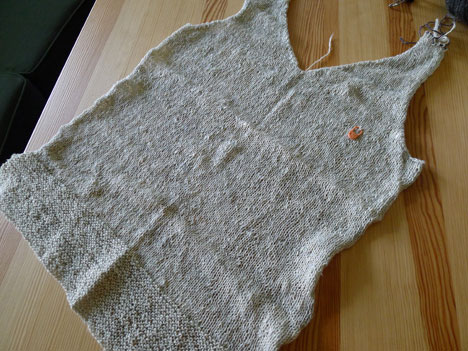 i finished up the front piece some time ago—i know it was early last week, but honestly, it may as well have been last year for all i remember (my days tend to blur into each other). isn’t it kind of cool how the fabric creases like paper? no worries—it doesn’t feel anything like paper, but it does speak about how crisp and cool the fabric is. and so light, like a breath of air. 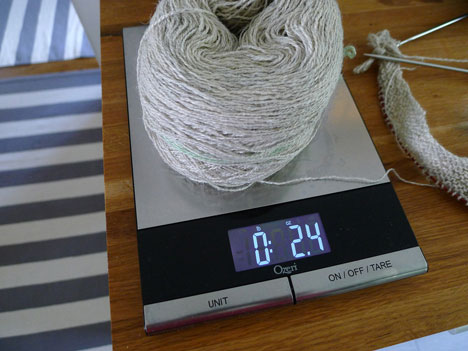 i started with a four ounce skein and after knitting that whole front piece, i still have about two-thirds left over. wow—i might be able to get a sleeve out of it after all. right now, my plan is to complete it as a semi-sleeveless style, with an armhole finish long enough to cover the top of the shoulder.

but now i’m thinking that i’ll have enough yarn to knit a pair of sleeves that hit just above the elbow and make a second, sleeveless top in another shade when the sample skeins arrive. 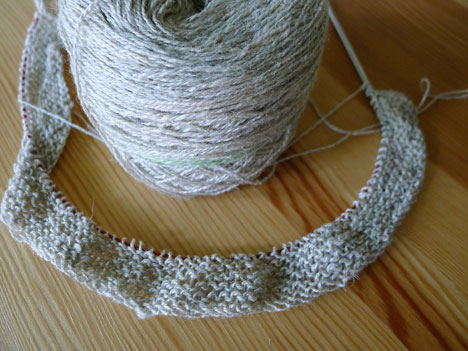 once the front was off the needles, i cast on right away for the back piece and started the garter stitch hem. for some reason, that first three inches took a while, but i think that’s because i was working so hard on both the knitting and the pattern for the other thing i had going. 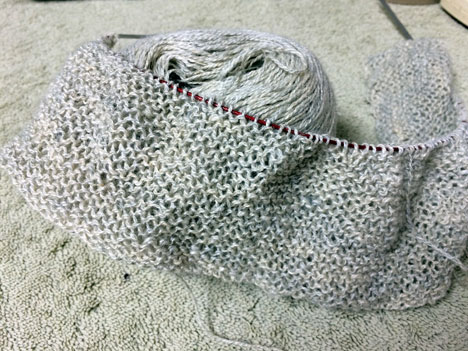 i did work on it here and there when i needed a small, brainless project to knit during meetings and car rides. but i didn’t get much further than the hem until monday.

you might have noticed that the fabric seems a bit uneven or insubstantial. part of that is definitely the character of the cloth—the blend IS a bit uneven and quirky, but not so much that it lacks integrity as a fabric. i personally like the texture; it lends a nice character to otherwise plain knitting, but not so much as to be disturbing in lace patterns. 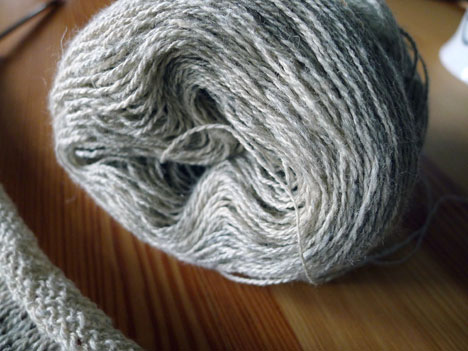 and part of the inconsistency we are seeing in the fabric for this project is because i am knitting with the unwashed sample skein. this yarn is just as it is when it comes off the spinning equipment—it hasn’t been soaked and washed yet, so the fiber isn’t quite as soft and definitely not as airy. 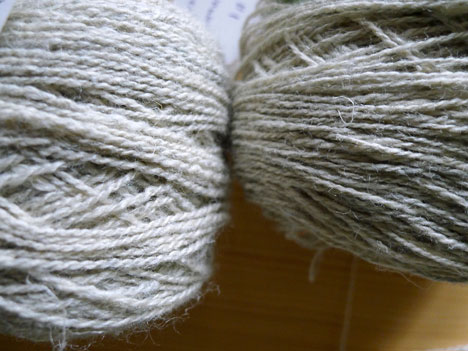 i think that in this case, the washed yarn is a bit nicer to knit with and all of our production skeins will be washed at the mill. they will still transform a bit when you wash your garment at home, but not as drastically and you won’t have to plan around that. 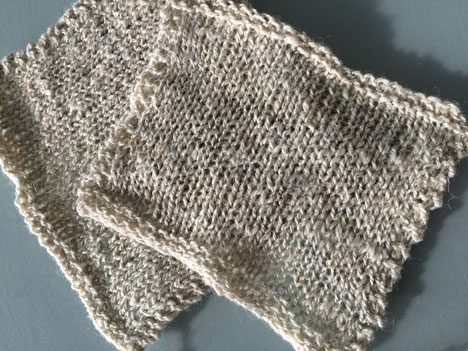 my shell is designed to be the fabric that i swatched, so once i wash it, it will change considerably—in this case the finished piece will be wider and a little shorter than it looks here, while the fabric will be more fluid and at the same time, more cohesive, like my swatches (plus, cleaner and brighter).

that reminds me—we need to come up with names for out two new summer yarns. must put that on my to-do list. suggestions are welcome, no guarantees. 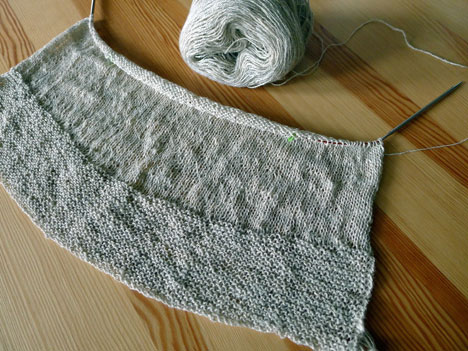 i’ve made considerable progress on the back since i completed my other project. on monday afternoon i finished up the hem section, changed needles and began the faster work in stockinette. because it’s such a simple garment, i’m trying something a bit different with the shape—i added a little short row shaping to the center back to create a downward curve over the hips. it adds maybe an inch and  half to the center back length. 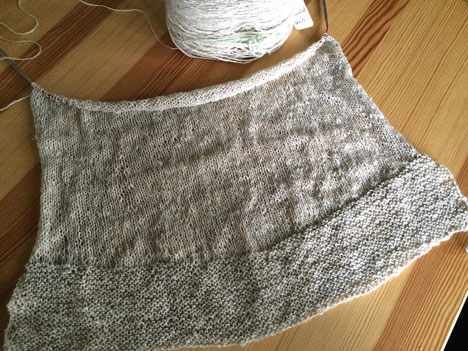 as of now i am past the waist and the body decreases and have begun increasing back to the underarm. in about three inches i will begin the armhole shaping and after that, the rest will fly. i’m excited—i could maybe have a new top to wear to helena’s graduation party on sunday! 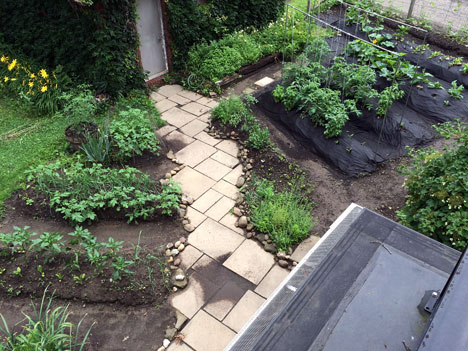 immersing myself in knitting to finish up a big project usually translates into putting other necessary tasks on the back burner—like garden work. well, we did also have a lot of very rainy days, so in my defense, we haven’t had good weather for working outdoors. yet the garden waits for no man—i think everything has doubled—and in some cases tripled—in size since last week’s photo.

i will take some close up photos for the next blog post so you can see what’s happening on the ground, but for one thing, i’m thrilled that nearly every chard seedling i transplanted has taken off and is flourishing. of course, the weather has been exactly what the greens love—cool, overcast, and wet. the original plantings will actually need to be thinned again very soon, which means i have to find space for more transplants.

don’t tell david, but i am eyeing the flower beds and imagining chard edgings . . .

heaven only knows what i’m going to do with all the chard, but i’m not complaining. haha, if we don’t start selling some more yarn, we may be living on it later in the year! 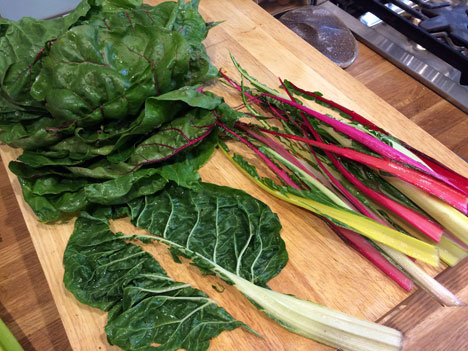 while ours is about a week away from being big enough to provide a meal, i was gifted a beautiful bunch of homegrown chard by my friend kris the other day and on saturday morning, i divided it up into a couple of meals. first i separated the leafy green parts form the stalks and wrapped those in damp toweling to keep in the fridge for week night omelettes. 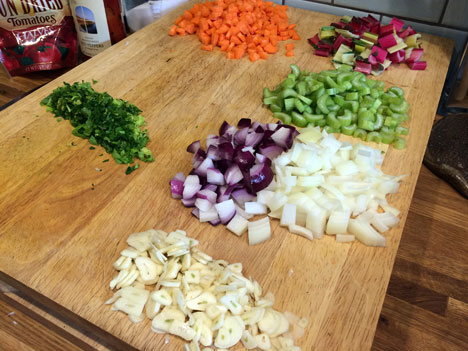 i chopped the multicolored stems into chunks to throw into a mirepoix for soup (yes, it’s still actually soup weather here, haha). i pulled purple and yellow onions from our garden, along with parsley, basil, and oregano. 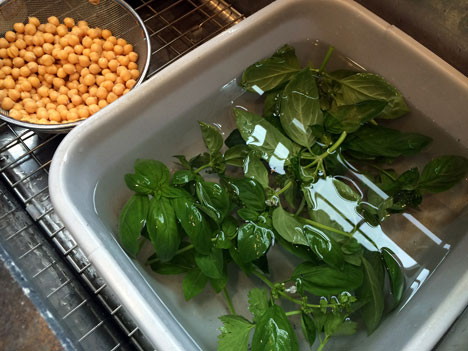 i took out one of the remaining cartons of last summer’s tomatoes from the freezer and opened a couple cans of chick peas (i have no luck cooking those from scratch; they always turn out awful). i also cut up some waxy yellow potatoes and drained  big jar of roasted peppers. 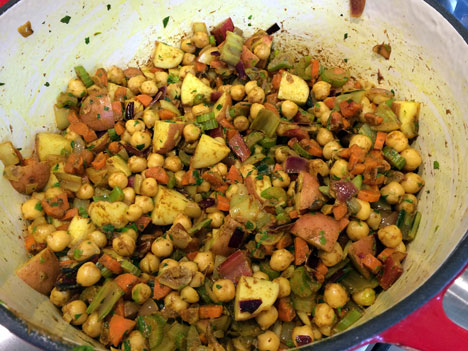 i wanted to make that spicy chick pea and tomato soup i had cooked while i was in NYC; i thought david would enjoy it.

he did and it was yummy—i forgot to take pictures of the result, but it looked very similar to the original pot. yum yum. 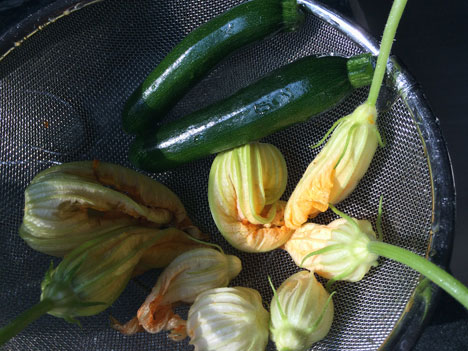 yesterday i picked two tiny zucchini plus some male flowers and david cooked eggs for dinner using these plus the chard leaves i cleaned the other day. it was the best omelet i’ve eaten all year.

i’m going to stop now because our test knitter is waiting for a pattern and i need to get back to work on that. tomorrow we are releasing another new sweater pattern, so don’t go far—we’ll want you on hand to celebrate with us!