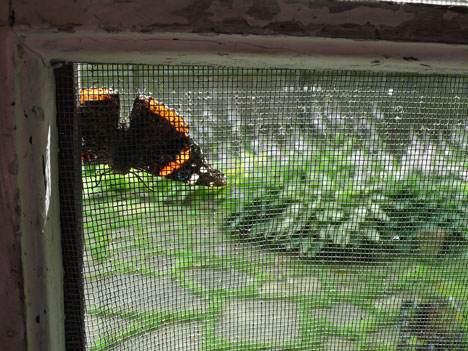 along with the amazing abundance of flowers we have this year comes an army of butterflies—all types, colors, and sizes. they seem to be concentrated out back, where the hostas are thick with blooms. 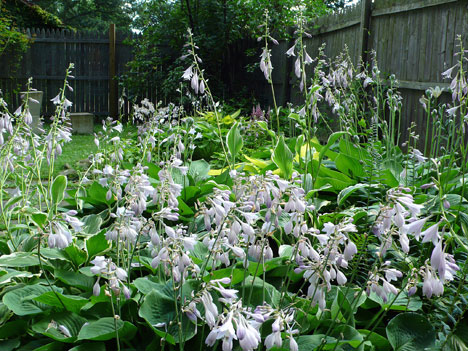 they especially love the base of the huge old oak tree that shades that whole area—i’ve been noticing for the last few years that there is a weepy spot at the bottom, which always smells like rotting fruit and sometimes, there are so many butterflies clustered there that the bark appears to be moving (unfortunately, whenever i’ve gotten close enough to take a picture of that, i did not have my camera in hand). 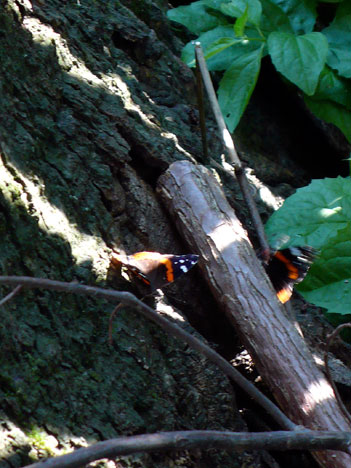 i don’t know squat about butterflies except that they are very pretty, so i can’t tell if the sticky stuff is something coming out of the tree that attracts them, or is it a substance they produce and put on the tree. 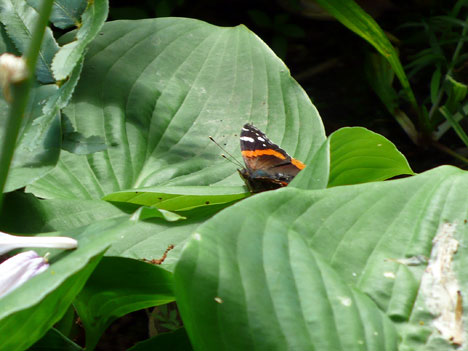 it’s a lot easier to catch them at the hostas, where they seem to sun themselves after a stint on the shady tree. 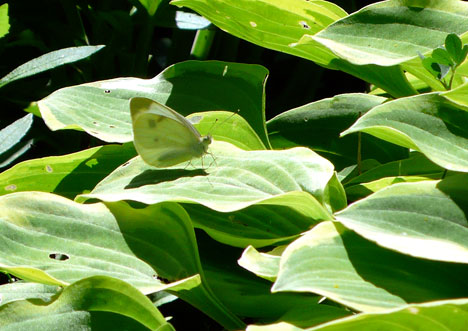 so now that i’ve distracted you with something pretty from the back yard, i can make my confession that i’ve got very little new knitting to show—again.

there’s a good reason, really; i’m completely addicted to my remaining secret project. right now, there is no deadline and i could be working on it at a more leisurely pace while accomplishing other knitting. but no—i’m totally immersed. it’s just turning out to be sooo exactly what i wanted it to be (even though i’ve had to back up a couple of times to rework some bits) that i can’t tear myself away.

the parts i had to rework were totally worth the trouble and now it’s even better for it. just a few more days and it will be finished (i swear). i don’t know when i can show it to you (maybe sooner than i think), but when i do, i just know you’ll be excited, too.

in the meantime, i haven’t completely ignored all my other knitting, it’s just a little random and, publicly at least, not growing all that quickly. 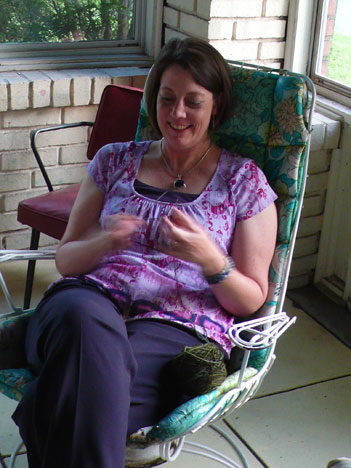 beckie came over the other night after work for dinner and knitting—we had a wonderful meal with lots of swiss chard from the garden and afterward, we settled in for some knitting. she’s swatching to begin her jackie jacket
with some gorgeous briar rose fourth of july, which she acquired from chris in a trade, a wonderful mix of deep olive, teal, and a little gold. by the time she got the swatch done it was too dark to take a good photo, but it looks aMAZing (you can see she’s in her happy place). 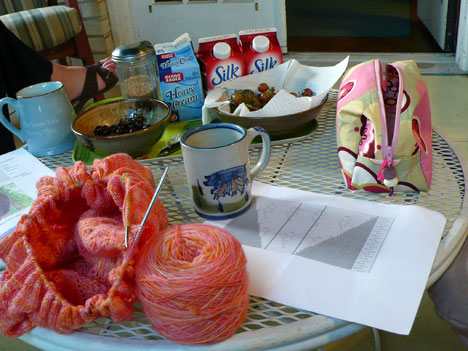 i worked on the baby blanket while we talked; david made coffee and chatted with us for a while, then wandered off to work somewhere else.

though it seems i haven’t worked on it much, the blanket is actually coming along rather nicely—the rows of plain knitting go quickly, so when i do sit with it, i can get through a bunch of them in no time. last night, i moved it to a larger needle—evidence that it is becoming sizable despite being a photographic blob. 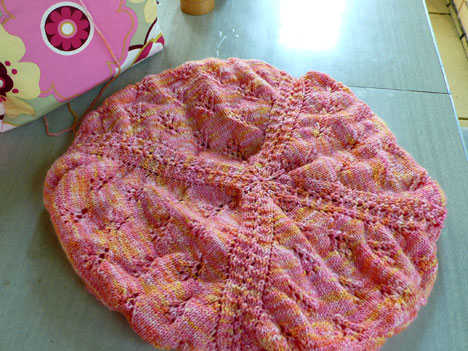 having two large projects on the needles at once (and one of them secret) means that there is a lot of monotony in my knitting from where you sit, i guess. with the shawlette out the door, the secret project nearing completion, and just a scarf left as a small takealong project, i’m afraid you’re going to get bored and i’d hate for that to happen.

(don’t be fooled—that’s absolutely just code for “i’m getting itchy to start something new”).

yes, i confess something else—when i’m not working on the secret project, i have NOT always been working on the baby blanket—i’ve spent several recent evenings tossing my stash, winding yarn, trolling stitch dictionaries, and swatching to pull together a new project to start (or three).

our nephew amad has a birthday alter this month and i want to make him some socks—i can’t resist his enthusiastic appreciation and undying fandom for them.

(by the way and totally off-subject: his baby brother micah, born at the end of july last year? omg, he started walking a month ago. not just walking either—we received a video of him running all over the place, carrying stuff, and chasing amad. i have a sneaky suspicion there is something to fear in that, but for now, i just replay the video every few hours and marvel at him with tears in my eyes—he’s adorable).

anyway, back to amad’s socks; i can’t decide if i should just make three pair of socks that are mini versions of ones that david already owns (amad would be over the moon), or design all new ones (he’d be over the moon about these too but the “uncle david” ones would probably be preferable). maybe the best solution is a mix of both . . . a new design or two and a replay of an older one.

i pulled out a selection of yarns that should stand up to boy antics with no sweat. woodland bamboo blend in a bright bamboo green from mackintosh yarns, and from kollage, sock-a-licious in blue heaven, and luscious in sea. they are all a little different in fiber content; i thought a variety might be good for his climate and it’ll be nice to try out the new blends in smaller socks.

few little socks to have on the needles is a good idea, since i have no new ones going at the moment.

but where my heart is truly wandering is to my next lace shawl project. since i have two big things on the needles right now and some big patterns underway, i’m not quite ready yet to start another big shawl, but a shawlette? oh yeah.
another confession—i’m hooked on knitting and wearing the little shawlettes. ever since i made that small pine and ivy in my handspun silk/cashmere yarn, i crave to knit them. and they are just right for me to wear—taking them along on travel is a brilliant way to have that extra layer along without using any suitcase space.

so, with shawlettes on the brain, i wound up this gorgeous skein of spirit trail penelope, which i’ve been dying to knit.

it’s a sheeny silk/merino blend in the falcon’s eye colorway, a deep blue-gray with washes of gold.

being that it’s summer, i’m thinking fireflies . . .
i did some swatches and i think i know where i’m going with that; i just need to sit down and plot it out on the computer to get started.

then i took out some bamboo/merino leftovers from the woolen rabbit to swatch another motif i’ve had my eye on for a while. 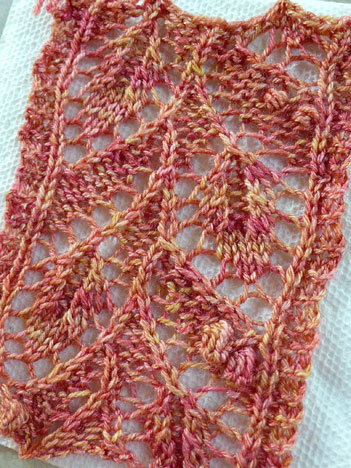 this one reminds me of pea vines and i thought it was perfect for a sock at one time, in kim’s kashmir yarn. but when i swatched it, i didn’t like it—i just thought it needed to be knit in a bigger yarn with a little more bounce and definition. so i tucked it away in my head for another time. then the other day, when we were emailing about her new bamboo lace yarn (to be unveiled this week, i hope!), it occurred to me that it might work with this pattern.

i don’t have that yarn yet, but i wanted to make a swatch anyway, because i needed to practice up on nupps.

i find them challenging . . . i don’t know what the problem is, but i’ve worked them several different ways, with knitting needles and crochet hooks. i’ve got every book imaginable to guide me and am trying any technique i can find and so far, i’m not all that happy with any of them (this is why they’ve been absent in all of my other designs). not to mention how they slow me down.

i haven’t called cookie yet, but that’s next if i can’t get what i want pretty soon. 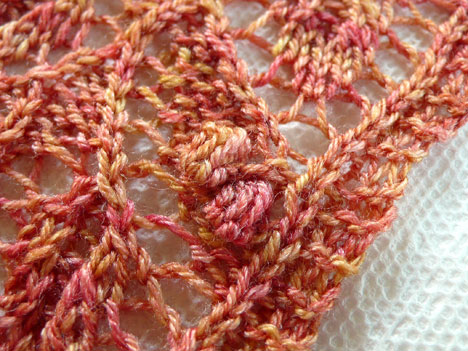 the ones above are too big and i don’t like the stitches at the base.
the ones below are ok, but they seem a little small and are barely showing on the face of the fabric. 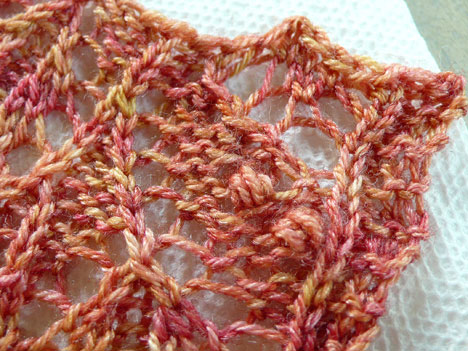 but at least show up some—most of my attempts kept popping to the back side (???). i have ways to go, but i think i’ll get there eventually. and if all else fails, the motif does look ok without them (but that’s not really an option for me at this point, heh—nupps MUST be mine now). wish me luck.

so you see, all sorts of random stuff and not much to show for it. i need to buckle down. in fact, it’s getting late and i should do that right now. 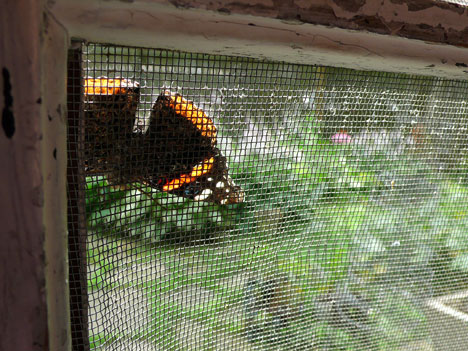