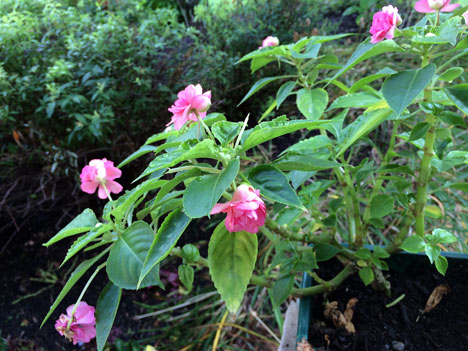 did you have a nice labor day weekend? we did a little traveling to visit our moms and actually ended up taking a couple of extra days, so that we were gone for a full week—i KNOW! that never happens, haha! 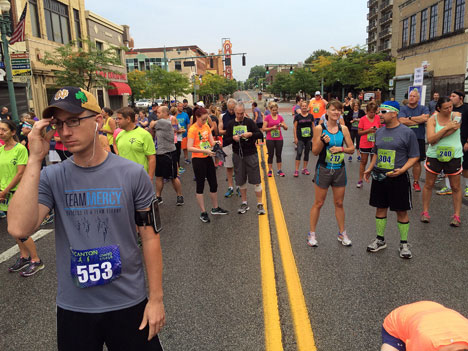 just before we left i ran the canton city charity chase. i haven’t been racing much this year, so i was looking forward to this one as the course is plotted to go through our neighborhood. i had to laugh when i opened my eyes that morning—after weeks without a drop of rain, it was showering outside. of course.

no worries though, it was barely misting by the time i left the house to walk downtown to the start line. this is a smallish race which was sadly reduced in length this year to a 10k; last year i ran it as a half marathon. so we didn’t cover all the territory i’m used to running, but i did have to bust a move and run a bit faster than i’m used to. one side effect of not racing much is that i’m not diligent about speed training; i run very consistently day to day but i don’t put in time doing drills (haha, i’m not much of a coach; i like to just have fun).

still, i didn’t do badly at all; a cool morning, nice people, and a course i love all made it a good run and i took second in my age group. plus, at the end there were fruity snacks, what’s not to love? 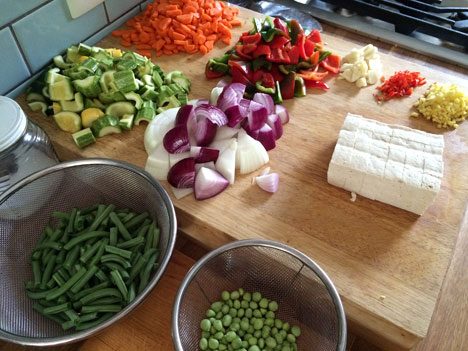 back home i spent the rest of the day in the garden and later, the kitchen. i picked green beans, squash, eggplant, greens, and tomatoes. i processed some tomatoes into puree, both roasted and  stewed, then chopped some of the vegetables into parts for a curry, which i was craving for dinner. everything in it came from our garden, except for the tofu and carrots, which i didn’t grow this year.

mmmm. after dinner i made a batch of pie dough so i could bake a fresh peach pie on tuesday to bring on our trip.

by wednesday morning we were ready to roll. i drove the first leg and david took over after a few hours so i could knit. i was more reasonable about the knitting i packed on this trip—just two bigger projects with extra yarn for each. one was secret and i worked on that almost exclusively at first so as to finish it up and get it off my plate. 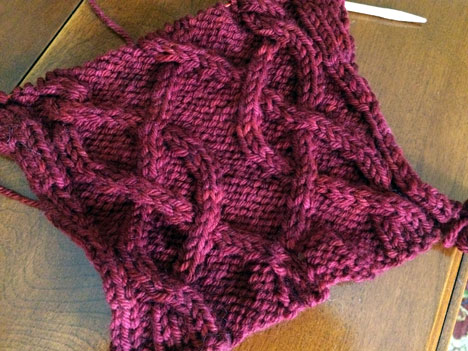 the other was (is) the project i am knitting with that gorgeous deep red vesta i showed you last week or so? mmm—full of cabled goodness. more on that later . . .

even though my mom said not to bring a lot, i did; there was too much produce to leave it sitting for five days. payback for all the times we tell her not to do something and she does it anyway, haha. 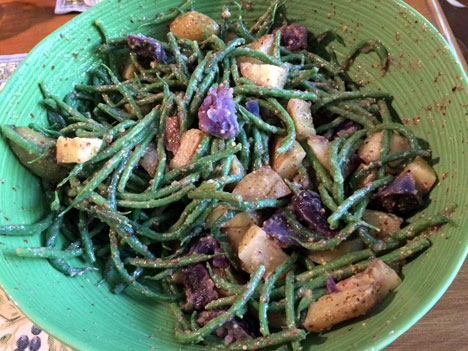 and good thing i did—the box of vegetables i brought along was completely gobbled up by the time we left. we ate fresh greens for dinner a couple of times, we used the beans in several dishes, including this yummy potato and green bean salad, which was an absolute snap to make (just five ingredients) and can be served warm or cold.

here’s how: take equal parts green beans and small waxy potatoes (i had 1.5 pounds of each; my mom bought some fancy tricolor fingerling potatoes). scrub potatoes and cut with skin on into chunks; top beans and rinse.

place potatoes in a pan of heavily salted (about 1/3 cup) cold water as you cut them. bring the pan to a boil and reduce heat to simmer; cook til tender (about 15 mins). throw beans into the pot for the last couple of minutes and cook until they are bright green all over but still crunchy.

drain and rinse potatoes and beans in cold water to stop cooking and transfer to the bowl with dressing while still warm. toss to coat, season with salt, pepper, and a drizzle of fresh oil if desired.

that’s it! it’s nice to make this dish before starting supper so the dressing can penetrate the warm vegetables. it tastes great cold as well and keeps for several days in the fridge. of course you can make it fancier, but it’s just great the way it is and takes less than a half hour to make. for me, this could be dinner on a hot summer night (with peach pie thrown in, natch) 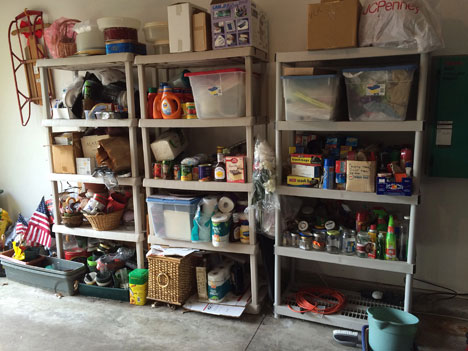 it was very important to fortify ourselves because one of our main tasks on this trip was to tackle my mom’s garage, which had become a catchall for the overflow from her house. so much so that she has to park the car in a very particular way just so she can get out of it. i find that too limiting for comfort; she needs to be able to move freely going in and out. besides, everything was getting very disorganized too with lots hidden out of view—not good.

friday was slated as the big day. i had a feeling it was going to be an all-day, all-out, drag down fight to throw out as much as we should.

well it did take all day, but we made some progress. mom thought we threw out too much and i think we could have done more, but at least now the boxes are labelled, food is stored all in one spot, there is some space to navigate, and she can reach most of the important items without being attacked from all sides by falling debris. 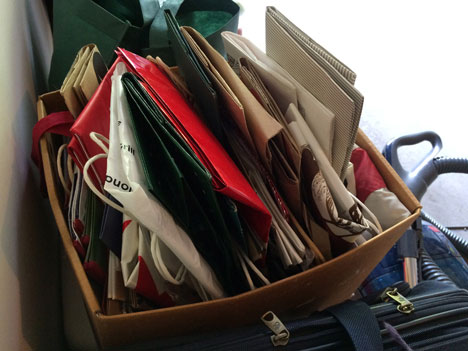 i did lose the battle over this enormous box of department store shopping bags (there must be over a hundred, i swear. and a story for each one).

it makes me think more clearly though about my own stuff—i know i have some of these same fondnesses for things i don’t really need or use. our house has plenty that can—and should—be delivered to its next life. i keep saying that we should take a couple of weeks completely off from work and the computers to tackle a purging of our house, but i don’t make sure it happens (partially because i find it overwhelming). food for thought. 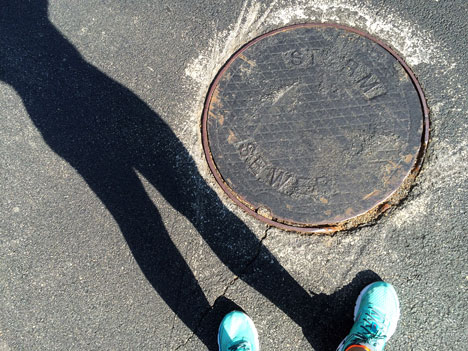 aside from that job, we did do quite a few really fun things over the weekend—you know moss doesn’t grow on my mom, haha. we went to an interesting photography show at the albany institute of art with my cousin, david went to long island to spend an afternoon with his mom (who is back in the ICU), and we got together with my sister’s family one night. i got some nice long runs in on roads surrounding the albany pine bush and we also watched old movies at night, when david and i got some knitting done (for me, that’s the best part of ANY day). 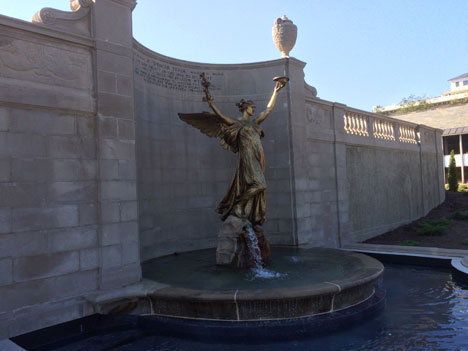 on labor day we took a ride to visit my aunt and detoured through Saratoga Springs on the way home. david had never visited and it’s really at its best in summer. monday was the last day of the racing season, so the town was buzzing. 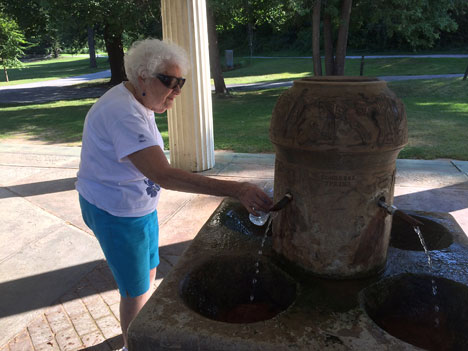 we didn’t actually go into the track (maybe another time), but we did stop in the center of town to walk around the park and fill a couple of bottles with spring water. 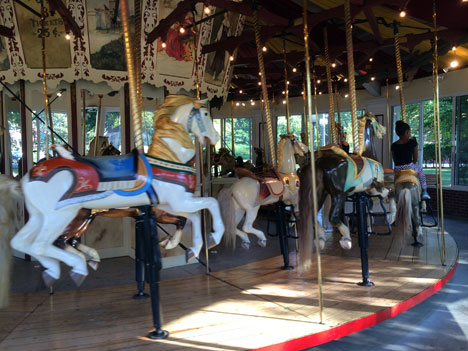 it was a scorcher so we took our time strolling—just an easy-going break from the drive home. 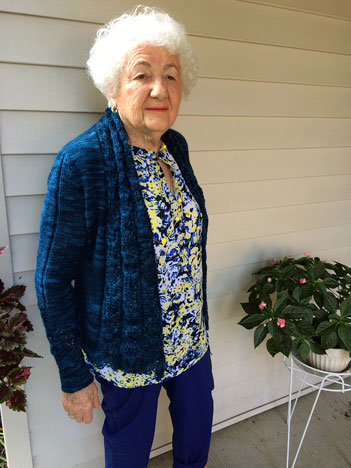 oh, i almost forgot—i took along my dark blue triticum sweater to see if it would fit my mom. i had steam blocked the pieces before sewing them together, but never gave the whole garment a complete soak and wash. so once i determined that she liked it and where it might need some blocking to customize the fit, i gave it a wash and laid it out to dry. it really looks nice on her i think. 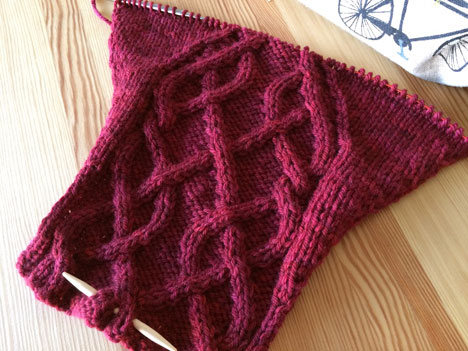 progress continued on this project as the week went on; i’ve been using the construction of the sleeves to finalize gauges and proportions (the cable is quite large and i love it). the vesta yarn by spirit trail fiberworks is absolutely divine—sooo soft and cushy! it interchanges really nicely with our own worsted weight selections as well, so i know already that i’ll be making another one of these in BNWs—probably chebris worsted (i’m thinking frappé). i’m pretty excited about it, but since it’s  a larger project, i think i’ll just report on it in bits and pieces.

the yarn is not available to purchase yet, but will debut at rhineneck next month—see it in the spirit trail booth. 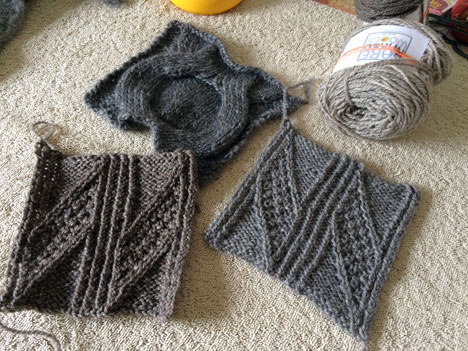 now that my secret projects are done (at least for a while) and the vesta project is clipping along well, i’ve been thinking about future projects since we left albany. even though it’s still very warm (it’s supposed to remain so during september), fall and winter are definitely coming at some point and i want to be ready. labor day just makes it feel more real. so i’ve been swatching away on ideas for outfits and layering pieces that will work together and as parts of other combinations.

in other words, the fun has begun.