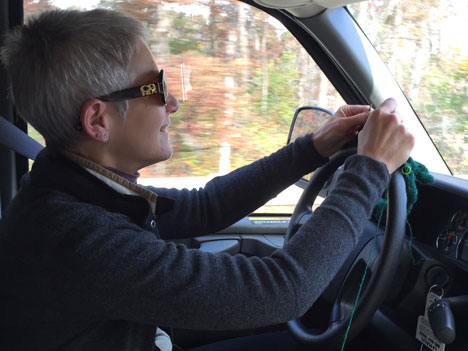 anyway, it didn’t last long; i was just posing briefly with kim’s knitting for a goofy vacation shot—i had my eyes glued to the road the whole time. 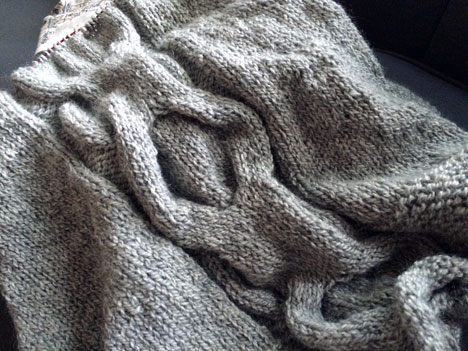 that said, i left home with the intention of doing lots of knitting on that trip—i had to try to catch up. since it was unlikely i’d open my computer to do paperwork, i could at least use in-between moments to knit. i brought along only three projects—all bigger ones. two from the active rotation plus a backup project (you never know) that’s been on hold for a bit. 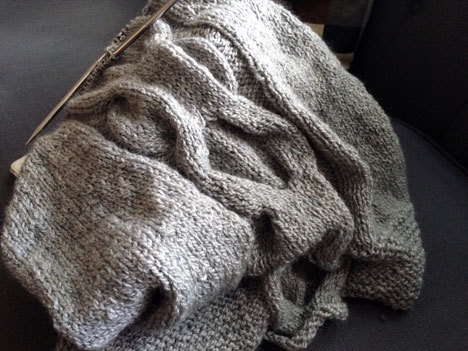 my go-to project for the trip is another long sweater i’ve been knitting in chebris worsted (this time in the dragée shade). it was just the right mix of mindless stockinette with some shaping and a BIG killer cable. perfect for chugging away on while talking, laughing, and waiting. 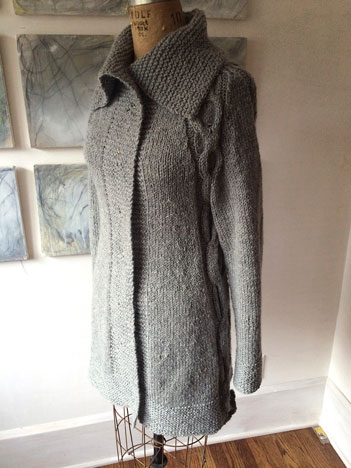 this one has raglan shaping and is knit all in one piece. with knitting complete and with no finishing work to speak of (even the button bands are incorporated), i’ve actually been feeling sort of dumped by my knitting in the aftermath; it’s through with me. just a few yarn ends to weave in and a couple of sleeve seams—that’s it. no cake? no farewell party?

i can’t whine for long about it tho—not when it’s so yummy. 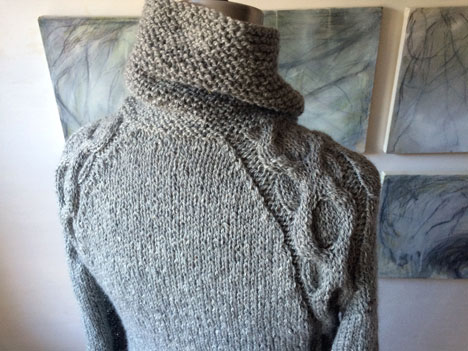 delicious garter stitch accents everywhere, including that big cuddly collar. i love how the cabled raglan lines become a big feature at the top of the coat. 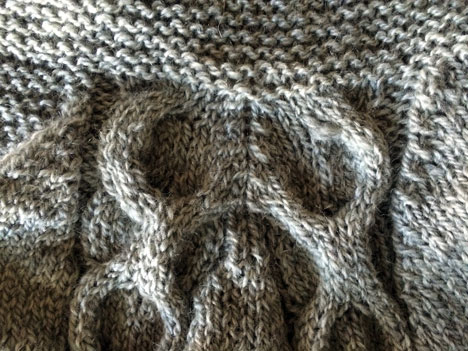 when i was texting photos to anne marie, she asked to see how the cables came together at the top. as they converged, i just continued to decrease at the center, chipping away at the inside edges of each while maintaining the twist on the outside half. in the previous photo, you can see that it’s not an aspect that’s very visible when it’s on the body; most of the time, the collar will overlap it.

this sweater coat/jacket is part of a collection that we’ll be publishing in january; myself and a few other designers together, all in BNWs. i’ve got to wash it yet and after getting final measurements, write up the pattern and get it out to the tech editor, posthaste. i’m running behind on my own project, haha.

since helena joined us for knit night tonight, i asked her to throw it on for a few spontaneous shots—she looks adorable in it, no?

oh, totally random but before i forget, the winner of romi’s book, new lace knitting, is sue C! she has been emailed and we will get her book in the post on friday. 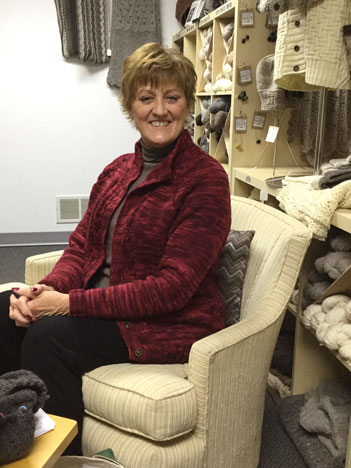 speaking of knit night, barb was also in the house, wearing the red pedal pusher jacket she finished knitting at rhinebeck. she used briar rose charity; looks like color 161. 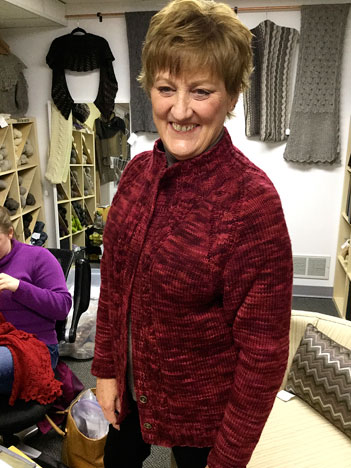 she looks amazing in it; that red kept catching my eye all evening. 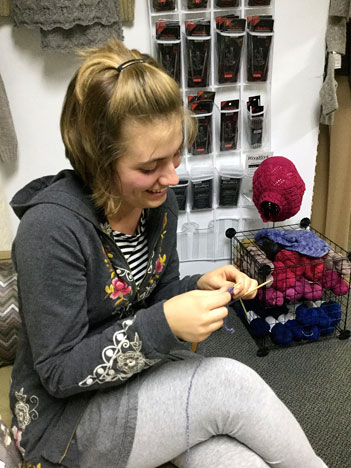 helena came by to knit with us tonight which was lots of fun—she’s working on her first project involving short rows—the intertidal mittens in feederbrook farms entropy that we shipped as part of our purple club last year. the mitten has a shell-shaped cuff worked in short rows. she’s picking up the new technique very well; i think she’ll be back next week with a beautifully executed cuff. 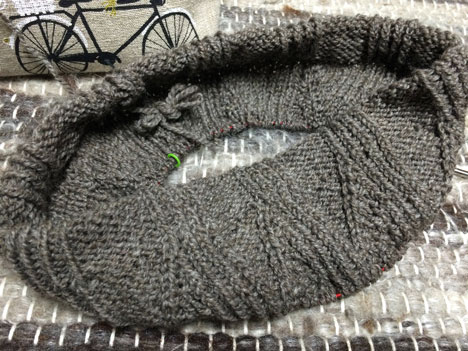 i have several secret projects on the needles which obviously i can’t show to you or at knit night so i brought along my other biggish project to work on—which is a wool A-line skirt. i showed this one briefly on the blog the other day, but since them, i ripped the whole thing out and started again when i realized that it was way too big for me; apparently i don’t have a back end the size of a volkswagon, despite what my inner MIL tells me!

anyway . . . all fixed now; i believe i am on the right track to achieve the gracefully shaped skirt i had in mind. i’m working with kent DK—SOooo light and squishy; i think this is going to drape in the most lovely way. 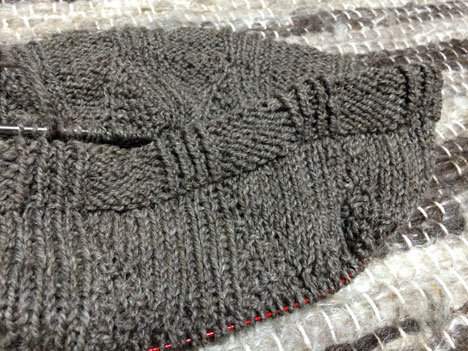 i knit an encased elastic waist by starting with a provisional cast on, then folding it back to knit that edge in later.

i left a little opening through which to thread the elastic, which i will sew up later using the yarn tail at the start of the work. i love to look close at the yarn color—driftwood—it has threads of both gray and brown fiber, giving it lots of great depth. the polish on that gorgeous romney serves to highlight the textured pattern so well. more on this one as it progresses.

speaking of texture, i came across this funny drawing the other day, something my mom had kept for me and wanted me to take home. i drew it for my dad when i was probably eight years old or so. 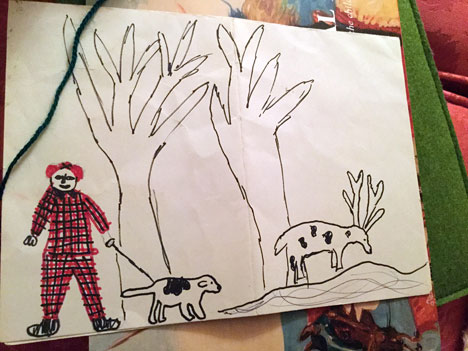 clearly there was just one thing about hunting that fascinated me—the plaid clothes, natch.

14 thoughts on “there was knitting too”