the tomatoes are starting to ripen, mmm.
i picked these four perfect little ovals yesterday to eat in a salad; they should be delectable by this evening. i can hardly stand to keep them so long without eating them, but it’s nice to share with david too, hehe.

i also picked my third big batch of green beans, which i put up in the freezer for winter, when we’ll really appreciate them. i’m surprised by how many green beans we’re getting from that little ten-foot row; i think we’ll have one more decent picking before they are exhausted. definitely good incentive for doing a second planting. it’s a little late, but if i do it this weekend, there might be time to grow some nice beans by the end of august (they supposedly love hot weather).

other than that, i haven’t been out in the garden much this week. there’s not a lot to do except pick things for dinner and wait for more produce to come in quantities for freezing (oh i have a feeling i will rue that statement eventually).

so i’ve been able to do quite a bit of knitting, which is good—i’ve got a bunch of projects that need to get done, including another bit of secret knitting. and today, as it happens, it is all lace, all the time—lace in all stages of planning and completion.

are you excited??
let’s get on with it then.

i made a concentrated effort over the last few days to get my blue scarf done and last night, while knitting at beckie’s, i finished it. first thing this morning, into the bath it went, after which i blocked it

up til now, it’s sorta just been a blue scarf, but wow—isn’t it so different when it’s stretched? though i know we’ve always loved the gorgeous colorway, it’s been hard before now to see very much detail in the fabric, so a good stretching has made a dramatic transformation. 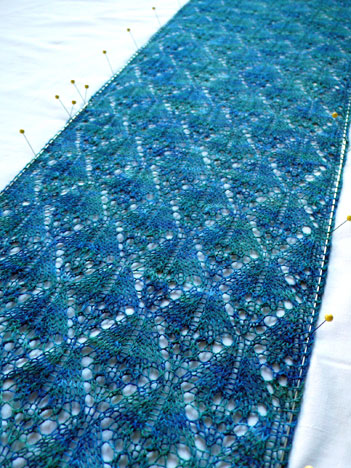 this is knit in 50/50 merino/silk lace from enchanted knoll farm, colorway queen mermaid. 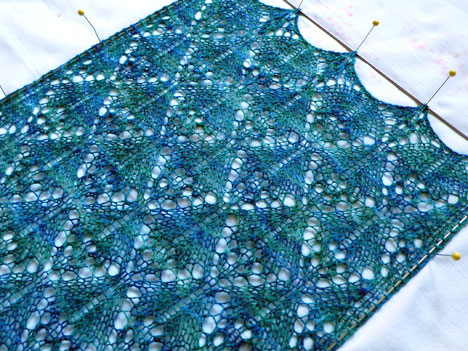 both ends stretched to make nice hem points, one end different from the other, but equally delicate and pretty. 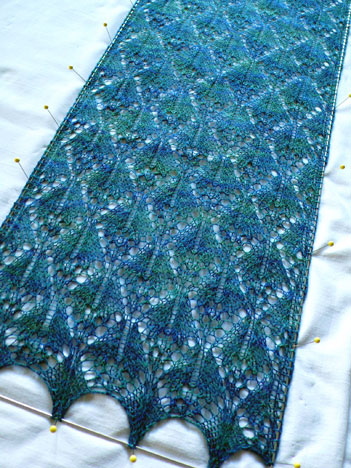 i was going to name this something completely different, but now that it’s blocking, i like the idea of calling it “mermaid’s tale”. i usually shy away from names that are so closely related to a colorway, but in this case, the shapes within the lace force my eyes to see swishing tails and water bubbles everywhere, as if a school of the mythical creatures is passing by. so i think that’s the direction i’ll go too, haha.

once it’s dry (that won’t take long) we’ll take some nice pictures so i can release the pattern on friday.

you know, i keep saying that the baby blanket is progressing slowly, and it feels as if i’ve just started the outer border pattern, but suddenly i’ve got sixteen rows done and that area is starting to look like something that i like a LOT. 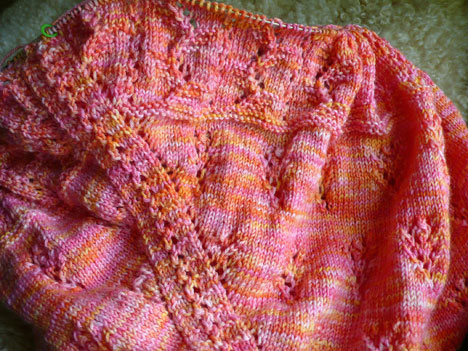 i was a little concerned about this part of the blanket because much as i wanted to use this staggered “stem” motif, it did not bowl me over in the swatching stage; it just didn’t have the same nice stitch definition or oomph that the rosebuds had.

but i was determined to use it because i’ve always liked it so much and i’m afraid i won’t have another opportunity—that is, i’m afraid i’ll never put together a composition in which it fits so well thematically (does everyone go through this or what?).

anyway, i took a chance that when knitted in the round, the texture would tighten up that extra little bit that makes the difference. and i’m over-the-moon that it has. 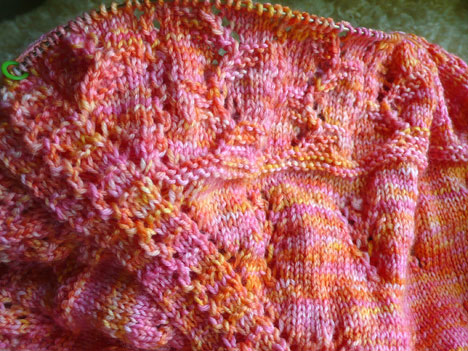 in fact the whole thing has taken on a new life with the addition of the border, i think. it really adds that much-needed hit of texture i was hoping for, with its bits of garter stitch here and there and its lively zig-zag motion. and for me, it’s really working with the corner panels. one more repeat (sixteen rows) to knit of this pattern and then it’s on to the edging.

uh—yeah, which i haven’t picked out quite yet, haha. i have some ideas. it is really helpful to see the final section taking shape to make the decision though; i’m glad i waited and didn’t get married to something that wouldn’t work. 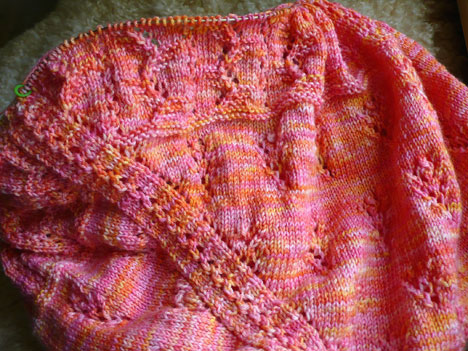 and can we just talk about the continued good cheer that the colorway brings to my late evening knitting? it’s the irresistible fearless fibers MCN luxury in colorway chastity—so soft to the touch and so happy, like having a real baby to hold (but without the diapers and drool, haha)

(just kidding; i love babies. i even like changing diapers—really.)

what i really need to do is get a pattern pulled together so karolyn can get started on her test knit in the meadow colorway—i can’t wait to see that one; i think it’s going to be different, but equally beautiful knit up in these motifs. pattern writing is top of my agenda for today, as soon as i finish writing this post.

oh, and ps: i need to think of a name for this blanket, too. i was tossing around the idea of “bed of roses”, but i’m open to ideas, short and sweet, thanks!

i know a lot of readers are anxious to see more of the firefly shawlette and i’ve got that too—isn’t it amazing how everything suddenly is pulling together?

i’m at the end of the top section of eyelet stars and am now ready to launch into the hem section of lace fireflies. tonight’s the night!

speaking of night, isn’t the colorway wonderfully nocturnal?
this is the über luxe penelope silk/merino yarn from spirit trail fiberworks in colorway falcon’s eye. i’ve enjoyed every single second of knitting with it and will be awfully sad when it’s over (but i’m sure i have a remedy somewhere in my yarn closet, haha).
i can’t help but see a moonlit sky streaked by thin clouds and golden flashes of starlight. 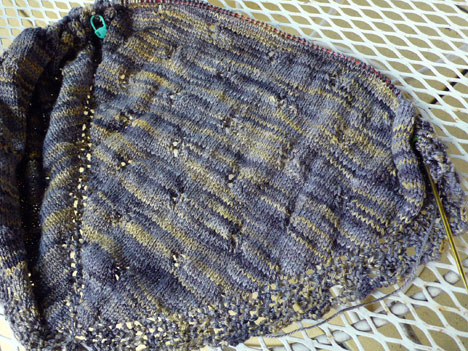 i remember watching this sort of sky during autumn nights while growing up in the hudson valley; under a sky like this, i could clearly see where the sleepy hollow legends sprang from.

i’ve been strategizing to use as much of my 437-yard skein as i can. right now, i’ve used 2 ounces and i have 1.6 ounces remaining. i’ve knit 96 rows and i’ll be adding 32 MORE rows (one-third more) to the outer perimeter. i’m waffling about whether i have enough to add another half-repeat of the body pattern. i know that some of you already have a spreadsheet all set up for this sort of calculation, while i myself am not so savvy about using them for knitting (i love them actually, and i used them extensively in another life, but i already have so much math stuffed into my head that thinking about putting one together now sends me to the sofa for a lie-down).

so if you are one of those wonderful people, could you let me know your thoughts?

ETA: i’m such an idiot (and lazy, too!). i had a shawl calculator (look in the side bar) right there in my “shawls” pattern folder all along. according to this handy spreadsheet, if i took a chance and worked another half-repeat of the body because the yarn ball just “feels big enough” (a total of 140 rows), i’d be 47% finished with 53% left to go: .53 x 3.6 (original ounces of yarn) = 1.9 ounces.

i have 1.6 ounces. so i think i’ll just continue as planned and start my hem now. even then i’m taking a chance, but i can cannibalize my swatch if i have to.

my big swatch is in a mini timeout. again. 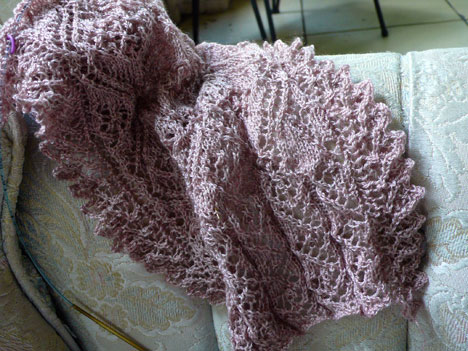 i worked on it like crazy all weekend long—and i double-emphasize the crazy—and after ripping out this one section for the third time, finally realized that what we really needed was for me to put it down and and go find something else to do (like finish my damn scarf or cook a meal or get outside for bike ride).

i’m refreshed now and ready to tackle it again—it just needs a little tweaking really. most of it is pretty lovely and i’m very happy, but i was overthinking the last motif WAY too much. and at the same time, i was anxiously rushing to finish and block it to see what i had. not a good combination.

now that i’ve had a deep breath, i can approach the rest of it more calmly, i think (i do get awfully wound up from swatching and composing).

ok now, i said something about needing to put a pattern together and i think i’d like to get on with my work day. you have a happy midweek and i’ll see you next time.