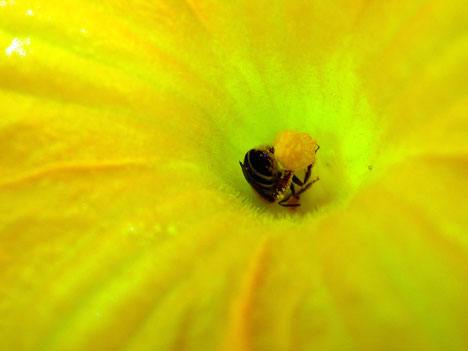 as expected, the weekend has been awfully busy—summer saturdays are filled with the usual bookkeeping first thing, followed directly by several hours of work in the garden to keep things up to snuff. and now, the harvest has begun, so there is cooking to do afterward as well. 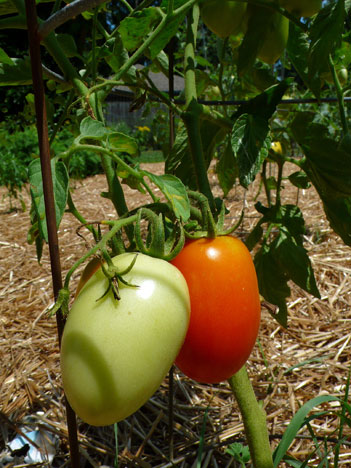 my first chore out there yesterday was to prune the tomatoes yet again (this was the fourth time in the last month). i have to say, this does keep the plants very manageable and seems to help the production of fruit; the plants with the most (and nicest) tomatoes are the ones i’ve pruned the most aggressively. i picked a few more to bring inside, but i know the real tide will be coming in just after i leave for knit nation next monday. 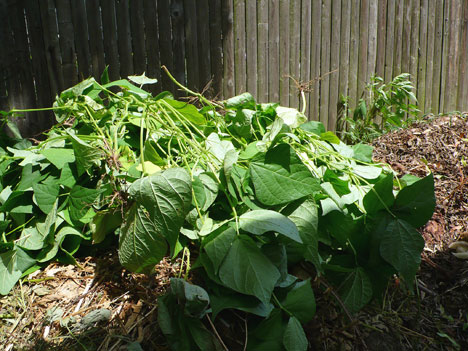 my next chore was to strip the bean plants of their final crop and pull up all the plants (there they are on the compost pile) so i could put in another new row for later in the summer. it was then that i spotted a serious problem we hadn’t noticed before this.

remember how i’ve been complaining that a lot of my plants seemed sluggish and wilty this year, with very little in the way of actual vegetable production? it was for a good reason—they weren’t getting any water, yikes!

i turned on the soaker hoses to dampen the ground while i planted the new seeds and move a few okra plants to new spaces. the water had been on for about half an hour when i realized that the ground in this one area was definitely NOT getting damp—not even close. sure enough, there was no flow in the one set of hoses which services my “cut and come again” table vegetables—greens, beets, beans, squash. no wonder they weren’t as lush as last year. 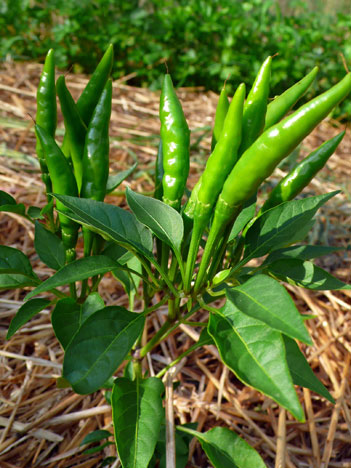 the tomatoes, leeks, basil, eggplant, asparagus, and peppers were getting plenty, but not the leafy things. oy. david fixed it later that afternoon, once i’d gone inside to work in the kitchen and now everything is MUCH perkier and happier.

no more wilted greens.
the okra actually weathered this dry spell pretty well, but then they are bigger plants with what i imagine are deeper roots. 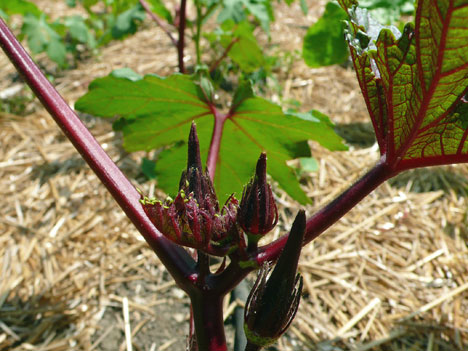 i had a very pleasant surprise form the okra yesterday . . . this is the first time i’ve been able to get them past the small plant stage to where they will actually bear fruit and when the little pointed tips appeared all over the plants, i assumed these were the okra pods themselves. but it turns out that no 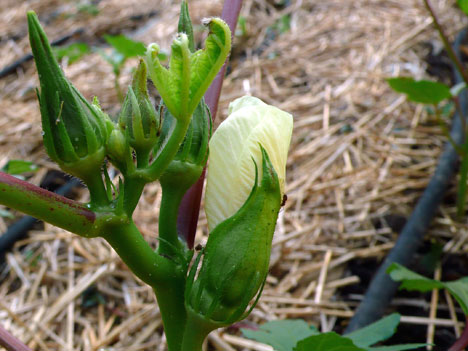 they are flower buds! really soft, pretty flower buds, too.
i’m completely smitten—i had no idea that okra produced such lovely blooms 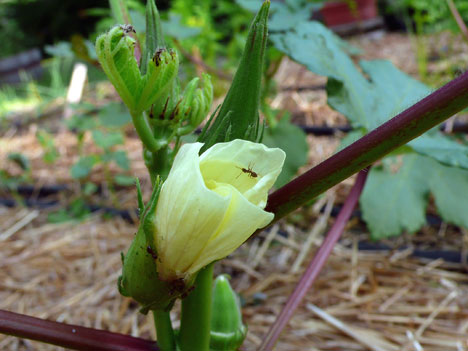 aren’t they pretty? the actual pods (you can see one just behind the yellow flower above) are shinier and more blunt on the end and appear from inside the flower, which apparently doesn’t open any further than this 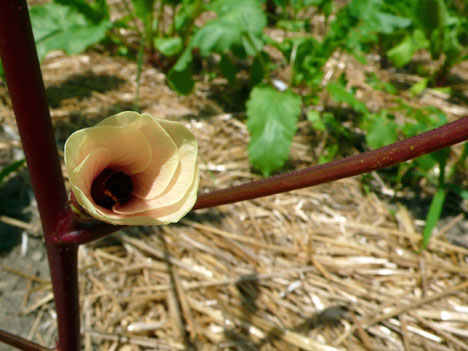 because when i looked back at it just 30 minutes after taking this picture, it was already wilting away. i’m telling you, the garden reveals something magical every time i turn around . . . it’s so gratifying to be out there in it. 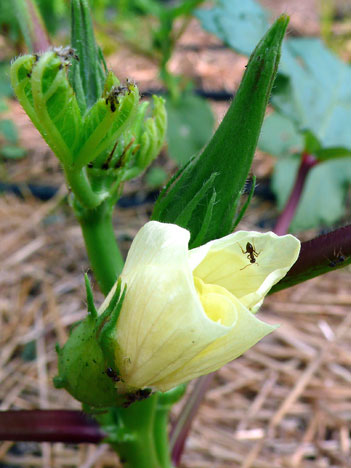 i pulled up all the beets while i was out there, too—with not much water, they didn’t get as big this year, but they were halfway out of the ground and the tops were bolting. 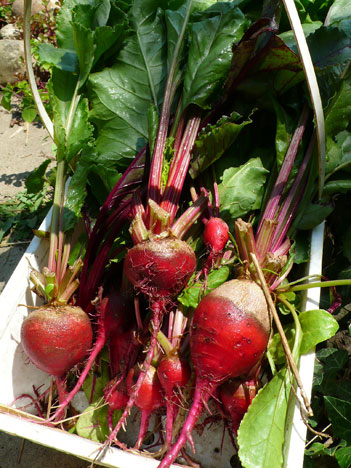 david really doesn’t like them, even after trying them several different ways (more on that later), so i don’t think it’s worth letting them sit there, when i could plant another batch of greens for fall instead. maybe after i dig up the shallots, i’ll plant more beets for the freezer—just enough for me to enjoy and maybe give a few away.

my eggplants, which until this week were still all about six inches high have finally surged and come to full life, all at once—they’ve literally tripled or quadrupled in size in the last seven days. covered with pinholes from some bug or other, but that seems to be a yearly thing that doesn’t harm them all that much. we keep an eye on it, but as far as i know, they survive it alright. even the one that the bunny chewed up has sprouted all new foliage and grown higher. 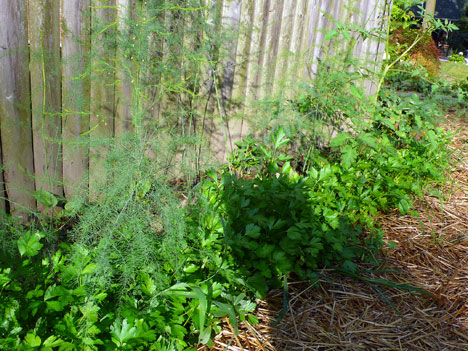 the newly rejuvenated asparagus bed is doing very well (jody, that parsley you told me to plant looks like a fence along the front, haha, so pretty).

i wondered where the heck our annual volunteer tomato plant would show up this time and was surprised a couple of weeks back to see it had emerged amongst the asparagus. it’s doing quite well; i probably should have pulled it out (hopefully, it won’t choke the ones it’s near), but i couldn’t bear to do it. they always give us such nice wild tomatoes . . .

here’s a good one, from a corner of the garden that’s been getting the right amount of water—the acorn squash that looked like this last week 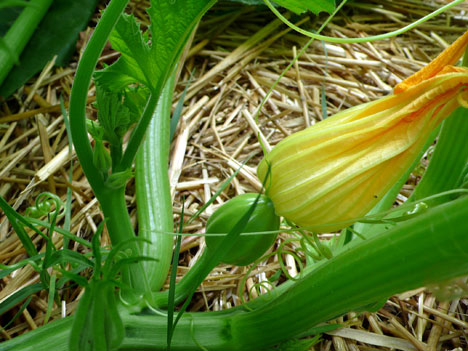 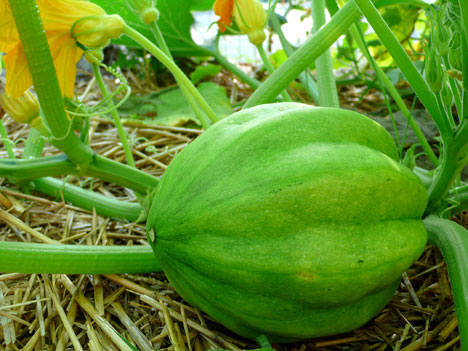 gorgeous, right? and there are several more of those on the vine. i have much more hope for the rest of the vegetables now . . . 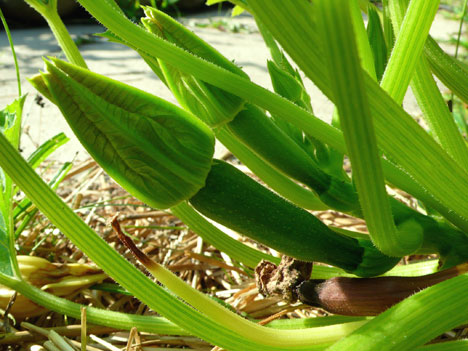 even after just one night of proper watering, they seem to be on the right track—today i spied three new summer squash that are past the tiny bud stage. they weren’t that big yesterday, for sure. thank goodness the plants have been very healthy and have hung in there patiently while we sorted things out. 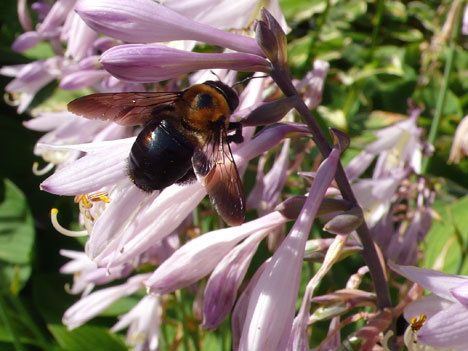 we are loaded with bees again this year too. the big bumblebees just love the wealth of hosta flowers in the back garden 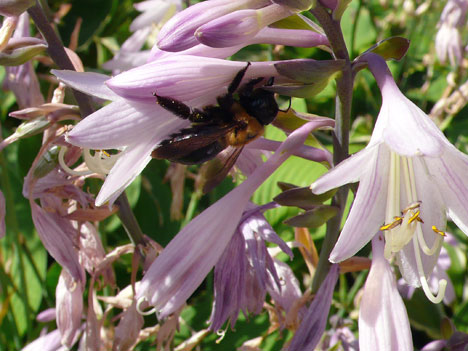 these guys are so big and fat, it’s a wonder they stay aloft, really. i’d say they average about an inch in length and are plenty big around, like a cartoon bullet.

that part of the yard is filled with their droning. they are competing with the butterflies for these flowers, but i haven’t seen any fisticuffs yet. 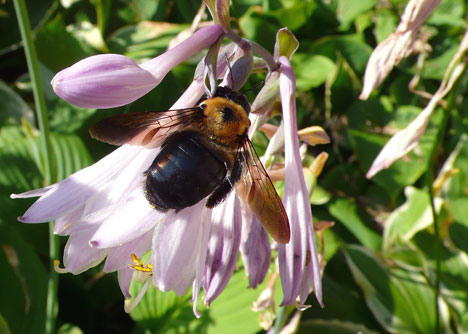 (i know this is a lot of bee photos, but i couldn’t help myself) 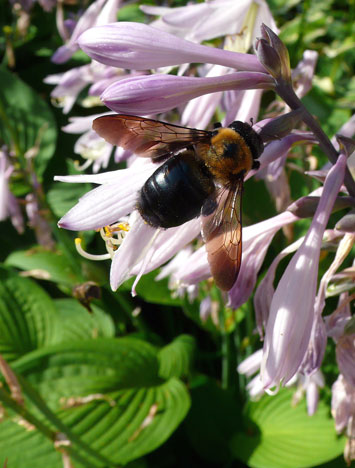 we have honey bees too, but they prefer the clover which fills our so-called “lawn”; it’s a little harder to get good pictures of them, but i’ll try for that another day.

here’s a funny story though: you know we always have a bunny that takes up residence in the back yard. they are usually not at all interested in the garden after a couple of experimental nibbles (like one of my eggplants this year and the shallot tops). i think they like the back yard better because it’s filled with clover and dandelions, which they can eat by the bale. well yesterday, i saw the bunny contentedly crunching on an apple from a may apple plant, haha. i always wondered whatever happened to all the apples when the plants die back and now i know.

after a few hours of working in the sun, i collected all the greens i could harvest and headed indoors to get the goods cooked and/or put away in the freezer. i put up four bags of greens and one of green beans. then i made a side dish of lightly cooked baby beans with caramelized garlic and a few drops of balsamic and roasted a big pan of beets with onions, garlic, pepper, salt, and rosemary. after that i made a quiche with red swiss chard, homegrown scallion, and mushrooms.

while it baked i treated myself to nice, long, cool shower (finally, haha) and after that we ate 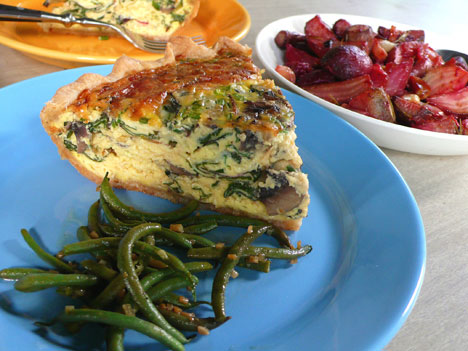 a very well-deserved (i think) late-evening meal.
david tried the roasted beets, and though he claims they are indeed “better than the ones we had last week”, says he still doesn’t care for beets (and poor thing, he looked as if he really had trouble swallowing them). so i think beets are for my own enjoyment only. 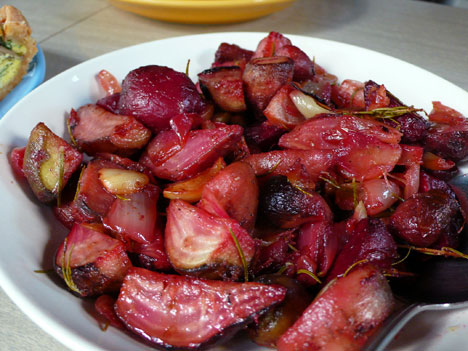 i do believe though, that this is my new favorite way to eat them.

after dinner, i finally got to sit down and knit for a bit. i’ll put up a short post tomorrow about all that—i think it’s time i put a couple of hours into pattern work (i leave for london in a WEEK! must get busy).

28 thoughts on “finally, the problem is solved”