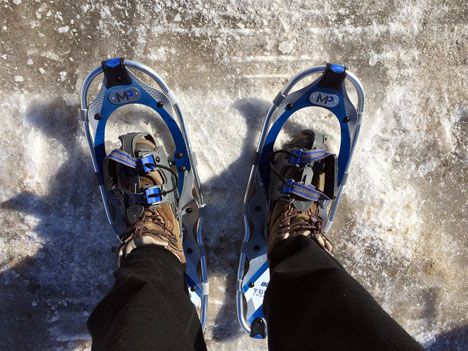 ok, i never did snowshoeing before but i always wanted to try it. and yesterday i got the chance. kim knows a mountain trail that begins less than a mile from her home and so, after the kids left for school and we’d had a nice hour of morning knitting, we got into some outdoor gear and headed for the trail. 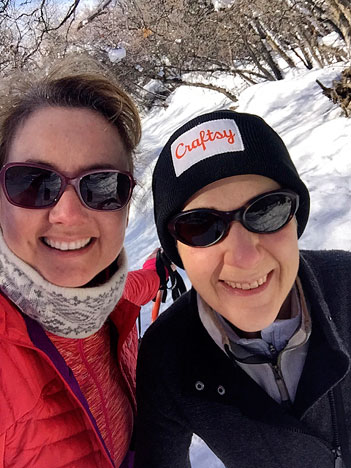 mandatory selfie to kick things off 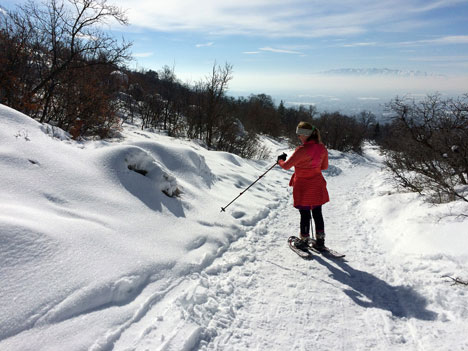 there is a lot more snow here in utah thats there was last year when i visited. and tons more than we have at home (it’s been a dry snow-less winter in our area). 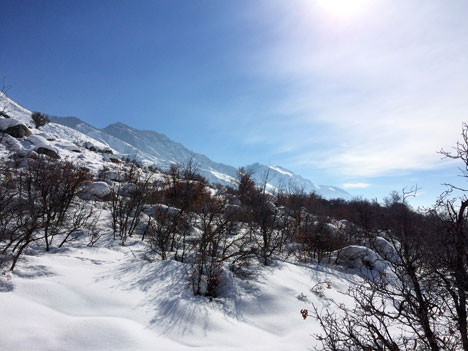 we trekked uphill for a little over an hour and the first half of the journey was more open; we could have easily gone off trail to explore a bit if we wanted. one thing i didn’t realize before coming to utah for the first time is how stunningly beautiful it is—the mountains look fake here, haha. 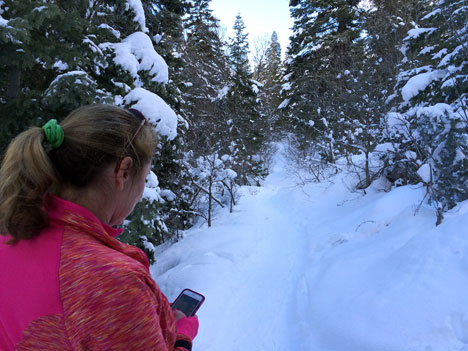 climbing higher, we got into some denser forest. kim was trying to get us all the way to the horsetail falls, but wasn’t sure how far it was. as it turned out, it was farther than we could manage that day, maybe a goal for hiking after the snow melts.

the woods were as beautiful as the open stretches; we were following a trail made by some kind of sled or snow mobile, maybe both. in the trees, the path narrowed a lot, taking us over little hills and what might have been rocks or fallen trees underneath. 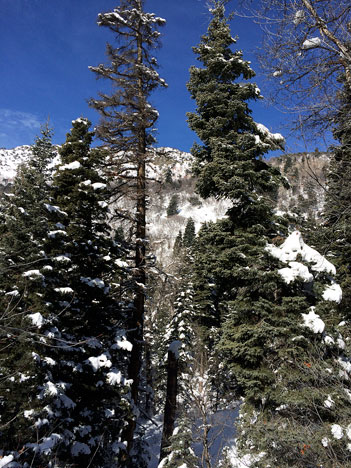 aren’t the trees amazing? i have a love affair with pine trees anyway, but the ones here are impressively tall and well shaped; i could tour the woods for a good long time. it was so quiet here; you could hear a pin drop. we saw a few other pole marks from skiers or snowshoers, but not many. the snow was so completely undisturbed in most places that it has a thick furring of sparkling crystals on top, like a coating if crushed sugar candy. 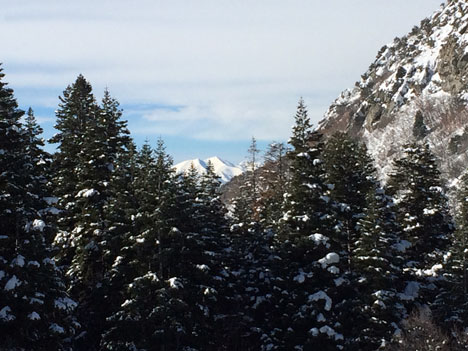 this is the view from the top of our climb, which i was really enjoying, by the way. snowshoeing was much less strenuous or difficult than i’d imagined; it’s pretty easy to get up to speed as long as you dress warmly and have boots that fit well. i would definitely take this up as a regular activity if i lived someplace with snow and mountains like these. and who knows—it might be fun to explore some of our county trail system at home on snowshoes; i might try it once we get some snow. 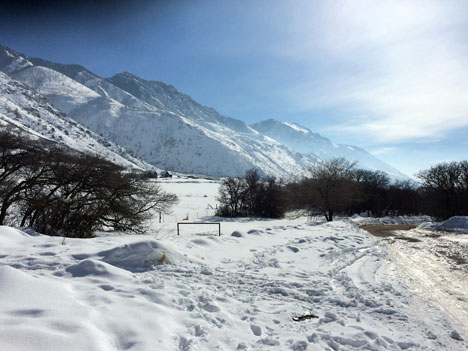 the trip down was considerably faster; i had to concentrate more, so i didn’t take as many photos. but as we neared the bottom, the sun was hitting the mountains just so and i got this shot. nice, huh?

i have to hand it to kim; she moved here from southern california just over a year ago and has become quite the snow bunny. i’m glad because she got me to try something i might never have done!

it’s been a crazy week since ensemble came out—almost as soon as it was published i had to be out the door to the craftsy instructor summit last weekend.

which a was super intense and interesting learning experience (still processing a lot of it, haha). 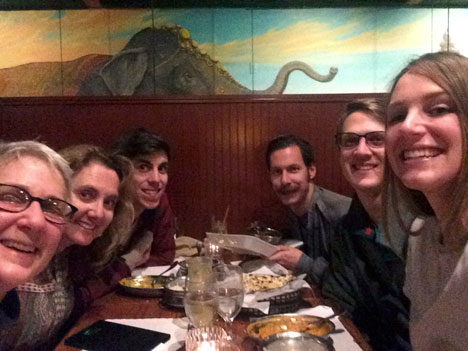 since i was going to be that far west, i decided to tack on this little after trip to visit with kim’s family. they’re not all here, but you get the idea—everyone is growing up fast but so far, happy and healthy. 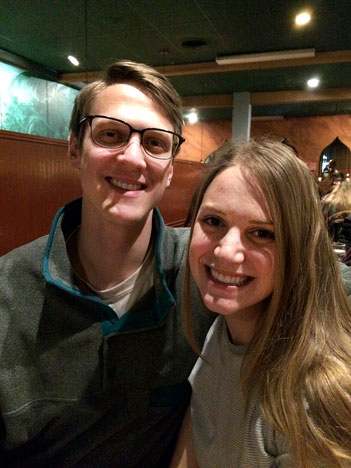 cole will be getting married to and in april—hard to believe this is the same boy that held my sock for the camera during my first visit with their family!

it looks like i’m going to get to meet up with rex again over the summer during the alaska cruise i’m teaching on in july—he’s going to be working up there again this year. 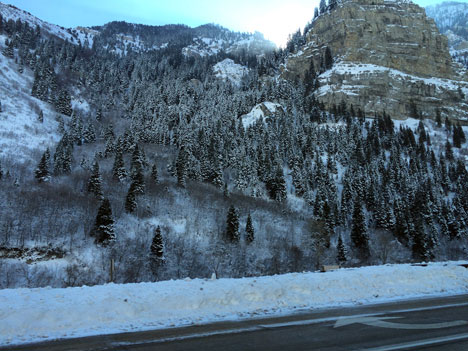 kim an i also drove to sundance one day, which i’d never been to. i’m not a skier so we didn’t do any of that but we did eat lunch there and take in the giNORmous icicles hanging all around the windows. wow. the ride up and back was breathtaking, too. 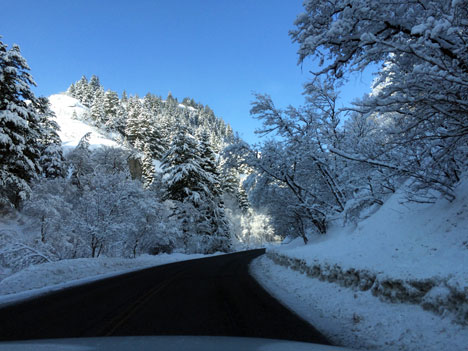 during the week i had another rare opportunity—touring the inside of the provo mormon temple, which is open to the public for just a brief time before its dedication in march. 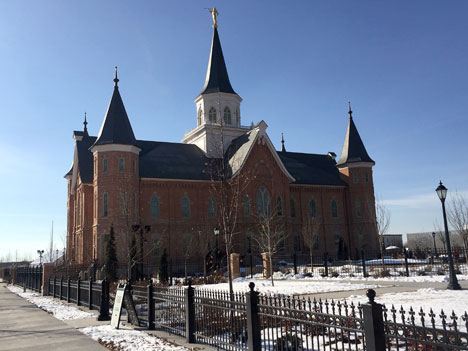 the temple burned to the ground in 2010 and has now been rebuilt; the tour provides a fascinating glimpse into its history and an introduction to mormon ceremonial tradition.

we also knitted a LOT this week. i am mostly working on secret projects that i can’t reveal just yet, but also swatching for the spring collection . . . more on that when i get home.

i’m flying out today; it will be sad to leave but i’m also looking forward to seeing david tonight. 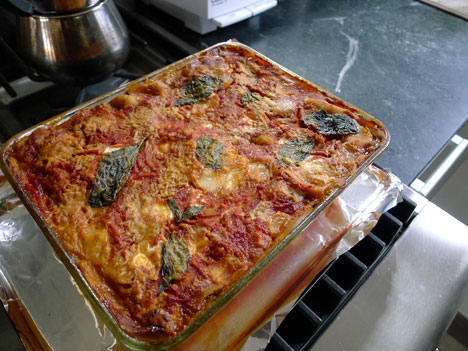 i’m hoping he’ll have some of this ready when i get in, mmm!