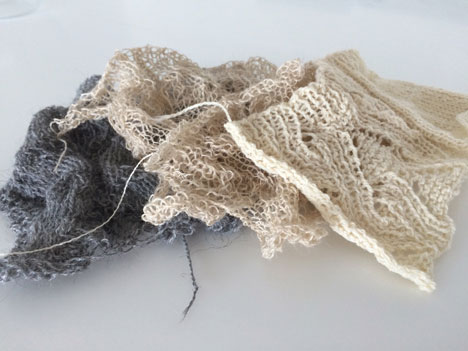 even though i left home with a good-sized bag of swatches, i didn’t have nearly enough to guide the precise work of pattern writing, so i had more research to conduct during my work retreat. i am nothing if not a process person—i revel in this aspect of my work. 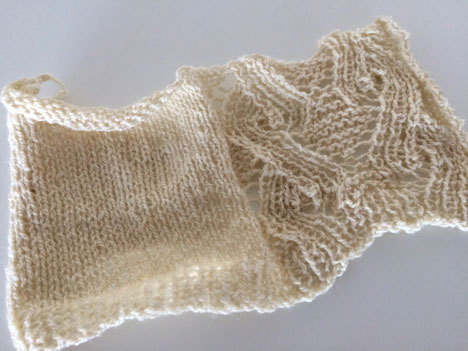 after completing janet guthrie, my next goal was to write up three patterns that i had test knitters waiting on. barb especially was waiting for one and i don’t like to keep her unoccupied for long, haha. 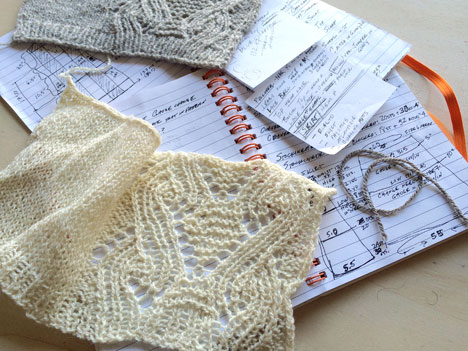 this next design was actually inspired by barb and cynthia, who mentioned a couple of times that a dress-length, sleeveless ivar would make an excellent jumper. i loved that idea, but had to let it stew for a while; i thought maybe it would be a good idea to change out the stitch pattern and reshape the body a bit for that application. 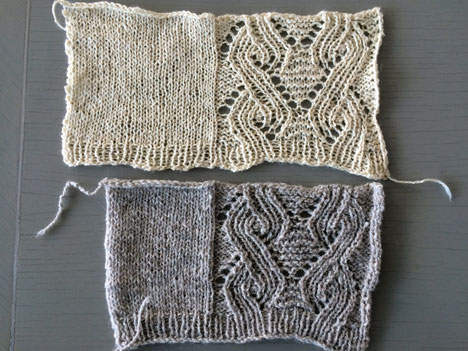 then in the fall when barb and i were examining samples in our shop and discussing how knitters are so universally drawn to certain motifs, i had a brainstorm—wouldn’t the motif from the curling cowl and mitts be a good choice for the dressy ivar? it’s such a favorite and one of our best sellers. she quickly agreed and i set to work on swatches. 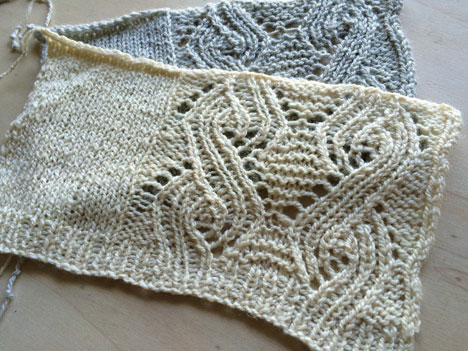 by the way, one of the topics covered in my new craftsy class, improve your knitting, is how to measure the gauge of patterns with moving sts or special textures. getting a beat on where the motif begins and ends or how much a fabric should be stretched to get gauge can be tricky . . . 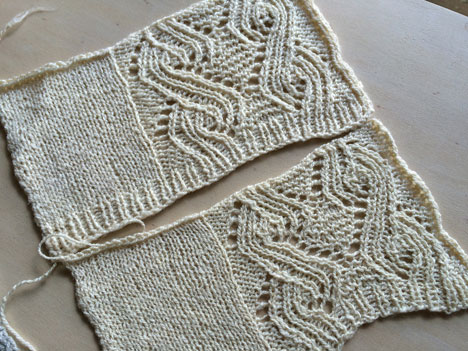 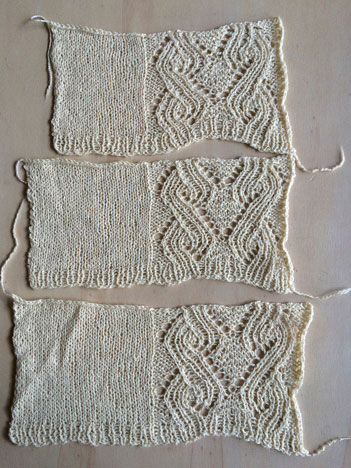 on 4.0 mm needles (bottom), i almost got a gauge that compares well with the stone soup, but the fabric was very liquid; i wanted a little more body. the next size down was better, but i still worried that in a longer garment, it might be a little unstable. two sizes smaller, i hit gauge very nicely and had a fabric i liked (top). again with this yarn as with the cotton blend, the difference between prewashed and postwashed gauge was considerable and the change in drape even more drastic.

it really pays for me to swatch a lot; not only do i get the precise numbers i need but i feel much more confident that my choices will work. since i wasn’t going to be knitting the prototype of this design myself, i was even more obsessive about it; i don’t want the test knitters to be worrying over whether the fabric is right—they need to focus on whether the instructions are right!

with those decisions made then, i got to work on redesigning the ivar into a jumper/vest as a pullover or cardigan (and yes, it will have a sleeve option, too)—something for everybody. even though we have a fully sized pattern in the correct gauge, the process of adding body shaping and a skirt to it was grueling and took the better part o f two days. but by friday night i had something to send to barb and kristi, who are knitting the sample garments. i also sent it to our tech editor tana so every number i wrote would be double checked by an expert. 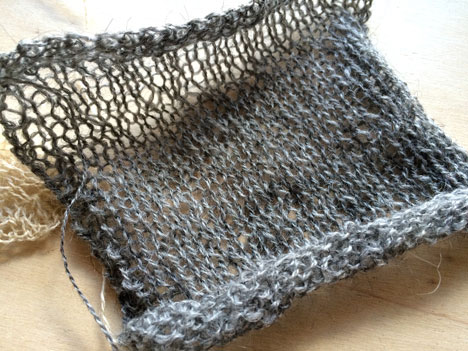 with that all done, i got to work on a simple, “little nothing” scarf/stole in our lace weight mohair yarns, chebris and cabécou. we haven’t done one of these in a while and i thought a nice wide scarf for spring would be a great addition to the collection. 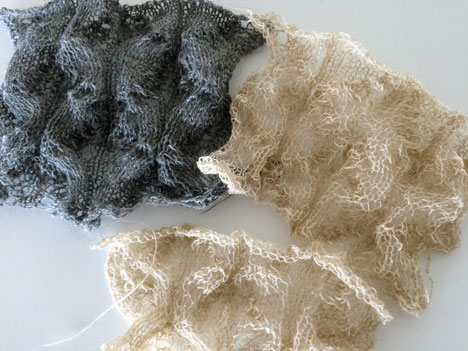 i had my eye on a simple but elegant stitch pattern—fun to knit in that way that makes you want to work just a few more rows to finish up the repeat before bed/work/dinner/cleaning. you know the kind . . . 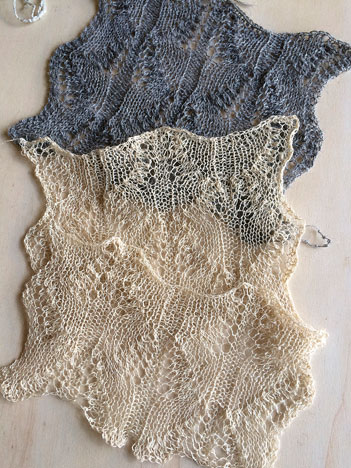 a bath and a few pins turned caterpillars to butterflies and points out the obvious necessity for swatching—growth. how, as the designer, could i possibly predict an accurate stitch count without seeing the final fabric?

the other thing is that i just want to know that the yarn is right for the motif. i assumed that the cabécou was a hands-down winner, but after swatching, i really loved the pattern in the chebris lace—maybe even more; it surprised me by being lighter than air and soft as a feather. and erica agreed from the photos i sent. but as the swatches get handled, i’m growing more and more fond of the cabécou after all—i love them both and so we shall knit the piece in both. jeanna is working on the stole right now in chebris and we’ll find someone to knit the smaller scarf in the finer lace. 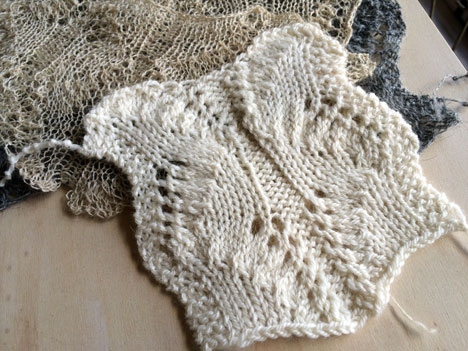 the motif is also luscious in the heavier ginny DK—just so cuddly! i’m sure we’ll knit a sample in this as well to bring forward into the january collection.

one of the goals of ensemble is to encourage the knitting of pieces that endure—ones that will work with your wardrobe not just in one season, but for many. so you will see as we progress and build it, that we’ll show pieces from previous seasons alongside and layered with new ones. i’m really excited about this concept and we’ve already got looks planned for both spring and next fall/winter that take advantage of the idea. 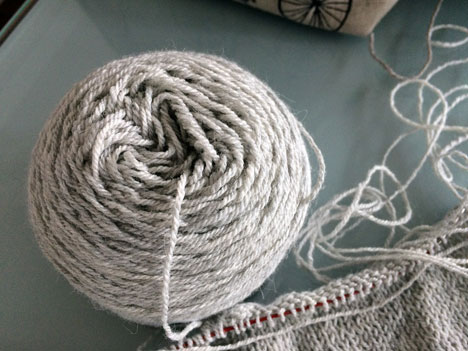 i would work again with the ginny sport, this time in the georgia shade—it’s sooooo . . . . sexy. i thought this would be wonderful as an easy, boyfriend pullover with a v-neck and a boxy fit to throw on at the beach or over a t-shirt on a cool night. knit on size 6 needles, the cotton blend is airy and floaty, but has body to support itself nicely. 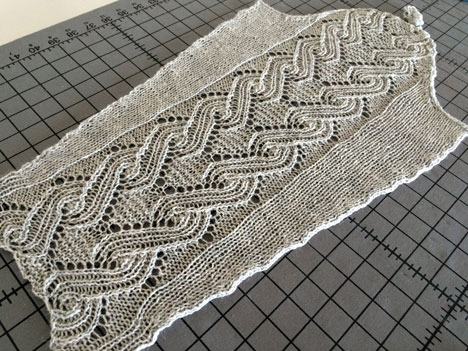 my crash course in knitting this yarn had barely begun when i put the first sleeve on the needles and when i blocked it out alongside janet guthrie, i found i had overcompensated on estimating the growth of the sts (believe me, i learned a LOT about knitting with our plant based yarns in the last month!). anyway, pretty as it was, it turned out a bit too narrow. i could stretch it to the size i wanted, but then density of the fabric suffered in a way i didn’t like. also, i wasn’t as happy with the hem as i’d hoped, so i was game to reknit this. one sleeve as a sacrificial lamb for the sake of a whole sweater? i’m ok with that as the designer—as long as it means the pattern gauge will be right when YOU knit it. 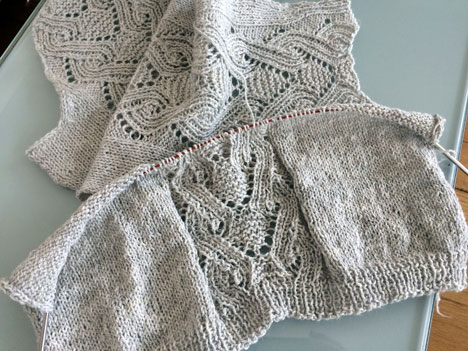 i quickly made up for lost time by knitting the whole front the following day. it just flew off the needles, believe me—i had no expectation of finishing it so fast but there you have it. it also felt good to be making something after spending a lot of time on test squares; it’s good to be diligent in research, but nice to feel productive too. 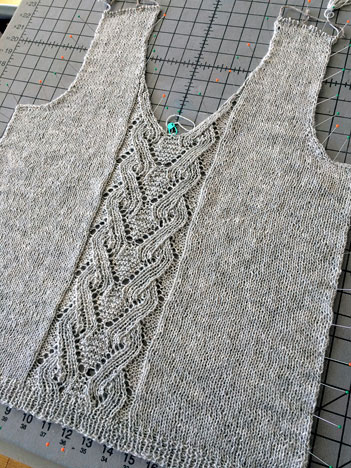 i even blocked it to be sure i was on the right track. it was perfect and i love it; i have a feeling i’m going to be living in this sweater once it’s seamed together (and then again in the fall). it’s a simple design, with the pattern running straight up the middle. to keep things in scale across the whole size range, i also used the pattern on the sleeve—it will add interest at the outer edges as well as a sexy, summery detail to an otherwise androgynous style.

well i couldn’t resist getting the back started right away—can you blame me? i decided on the fly (since i hadn’t committed to a written pattern yet) to add some optional short row shaping to the back; i thought a little extra length would be cute and just the touch that sets this basic sweater apart (aside from that addictive stitch pattern, of course).

as i mentioned, i still had a skirt pattern to write and another, more complex shawl in the works, so i stretched out the knitting of the back over the next few days, alternating it with some lace shawl knitting. i was binding off the back neck sts while waiting for my car to the airport the other day, so i did complete it before heading home. 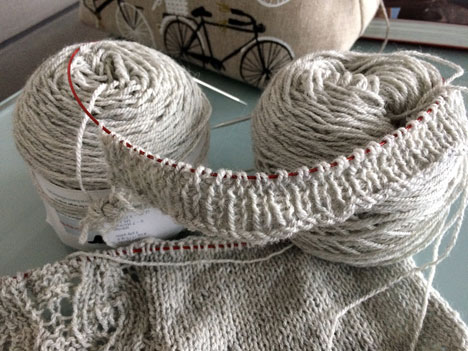 i thought ahead though and also cast on for a sleeve, because this design is a great travel knitting project. the sleeve would be my plane knitting and was as enjoyable and quick as could be; in addition to finishing off janet guthrie on friday morning, i also knit the sleeve cap and bound off. 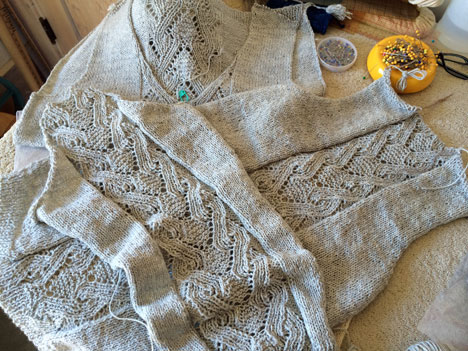 i’m skipping ahead a bit on the timeline just to say that i had three pieces finished by friday and had cast on for the second sleeve. i’m really gunning to get this done as fast as possible because right now we are having the perfect weather to wear it; i don’t want to have to wait for fall. it will be simple to stitch together and just needs a bit of neck ribbing to finish. 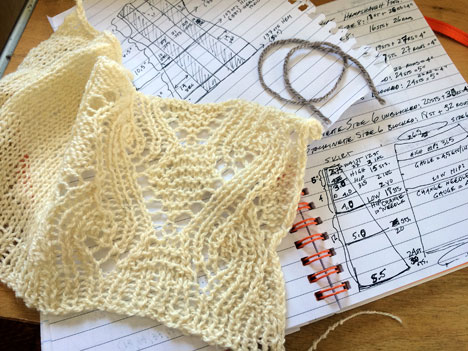 and for the summer, i am totally knitting one of these in the hemp fingering—i know i’m going to want a light pullover that doesn’t stick to the skin at ALL and for me, hempshaugh is just the ticket. 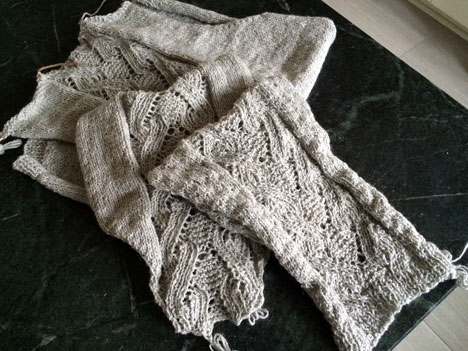 by sunday morning, all of my pieces were complete and i treated the unblocked ones to a nice hot soak in soapy water, then pinned them out to dry. 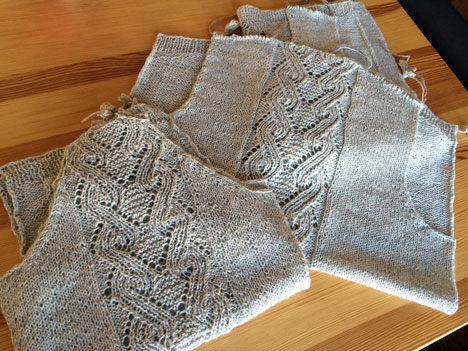 amazing isn’t it, what a difference blocking will make? i never get tired of it—so worth taking this step; the pieces are much much easier to work with after a bath or steam blocking.

yesterday morning i added the neck trim before starting my day—all that’s left now is to seam in the sleeve caps and sew up the underarms and sides. i’l be sure to share the results in my next post—i’d have it done already but have been trying to give equal time to my shawl pattern and skirt knitting.

next time i’ll tell you all about those—this time i’m mixing it up a bit!