is there any more cheerful sight on a spring day than these bright pink cherry blossoms against a blue, blue sky? i photographed these on my last morning in brooklyn, while running in the park.

along with these pretties . . . 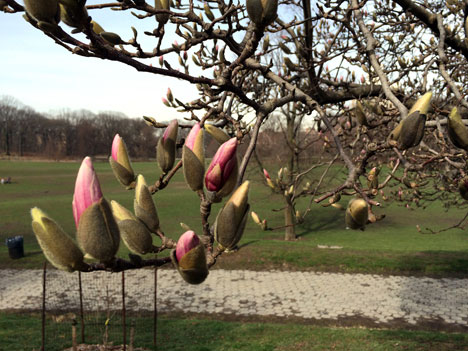 at home, we were behind NYC by about a week and though there were buds on everything, the weather has caused them to hit the pause button. all week long we saw forty-degree shifts from one day to the next, from mid-seventies one day to mid-thirties the next; the poor flowers couldn’t decide which way to call it, haha. safer to stay shut.

today though, they are tentatively opening up to face the sun. yay. to celebrate, we’ve got a spring fling free shipping offer for you in our online shop; just a few hours left to take advantage of this deal. 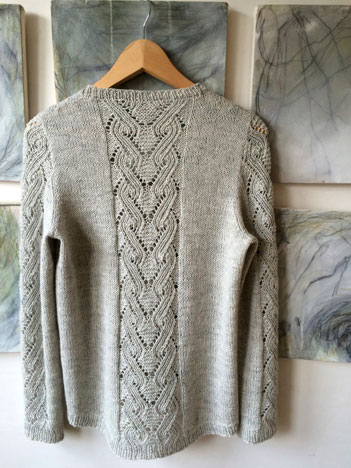 thank you so much for your very nice compliments on my new pullover design, illas cíes, which will be included in the spring ensemble collection we are rolling out at the end of april. 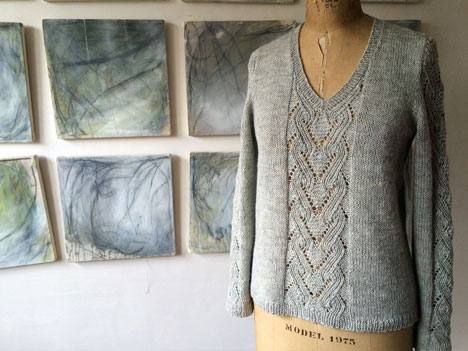 all washed and blocked now and it feels like a dream—soft, light, and with a lovely drape over the body’s curves in ginny sport and it took only two and half skeins for size small. on me, it’s a little looser and easy-fit than it is on my dress form, which is more well-endowed than i, haha. but it would also be super-cute as a tighter fitting pullover, i think. 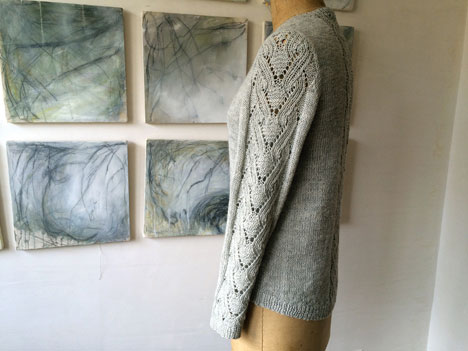 the sleeve is a feature of its own and provides interest from any angle. the design is named for an archipelago off the coast of galicia, spain, the islands of which make up a protected natural area with wildly curvy coastline exposures.

the cardigan/dress/vest version of this design (which barb is knitting now) will be named costa figueira, for an especially curvy portion that is heavily populated by fig trees. you can see in this photo that the terrain even looks like a platter of plump figs! 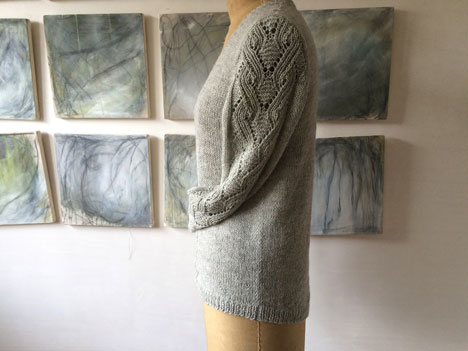 here, i pinned the sleeve aside so that you can see how the sweater hem slopes from front to back, adding to the feel of a comfy “boyfriend” fit; i’ll be throwing this on over t-shirts with long shorts and chinos, my summer uniform. the longer back is completely optional, of course, if you prefer a dressier look. you could also wear this much shorter, so that it just skims the top of your jeans in front—make it your own. 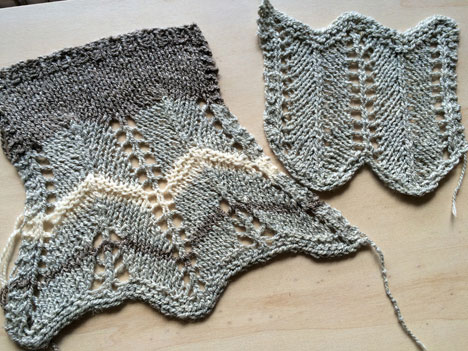 first, the swatches. i am modeling this design on an older skirt i made about eight years ago which i wear a lot in summer. the original was knit in a cotton/silk blend, very similar in character to our hempshaugh (AKA, the hemp), though ours is softer and lighter. 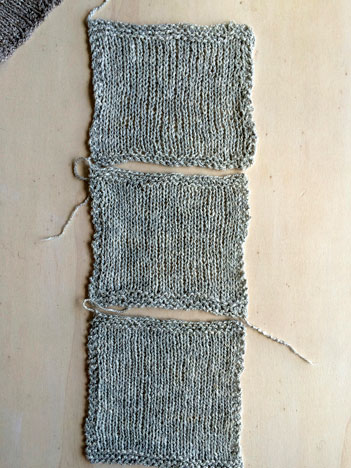 the hemp can be knit on a variety of needle sizes, depending on what sort of fabric you are looking to achieve. for lace, you can go all the way up to 5.0 mm or even 5.5 mm. on the bigger needle sizes (top, size 5.0 mm/US8), the 2-ply yarn is going to show its character by getting a bit wobbly; not a problem if you are stretching lace, but might not be ideal for garments, where you a fabric that holds a true center line and keeps its shape on its own (bottom, size 4.0 mm/US6). 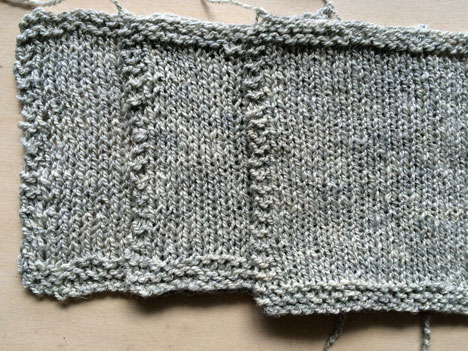 when we zoom in a bit, you can see even better how the tighter fabric (far right) is much more consistent. and there is little sacrifice in terms of lightness; it’s still airy and fluid enough to fall into nice folds. i don’t care for skirts or trousers that feel weighty or like they are dragging on my hips, so that’s an important feature for me. 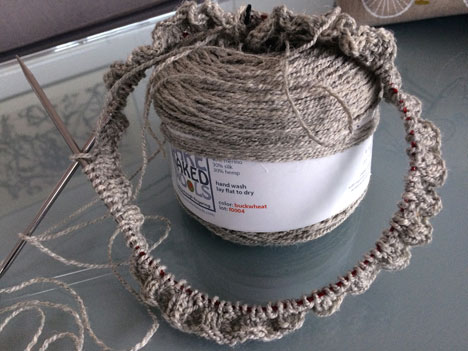 i actually cast on at the waist just before leaving brooklyn on the off chance that i might get stuck in a storm somewhere on the way home and need some extra knitting.

ok, i’ll admit that the flight went off without a hitch, but i did have a four hour layover in atlanta and let me tell you, i am glad i had my knitting. any longer and that skirt would have definitely seen some airtime. 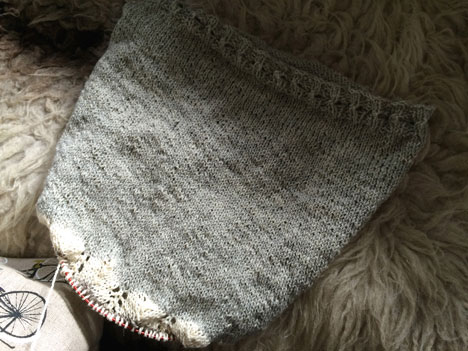 with all that stockinette in the upper skirt, it is brainless knitting to say the least—just an increase row every now and then to remember. this photo was taken on tuesday, a day or two after i got serious about it. 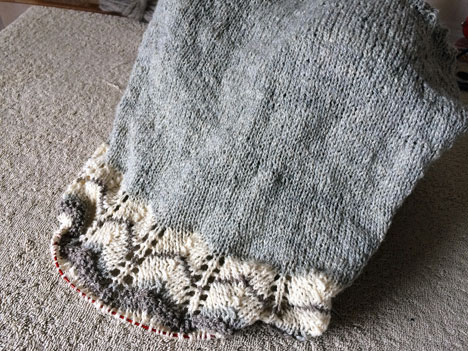 before i knew it, i was on the openwork—only slightly more complex but feels far faster because it’s also more interesting. i skipped a day or two to seam my illas cíes and work on my shawl pattern, but by friday morning there was progress from the night before. and from here i was very monogamous—at least for the weekend. 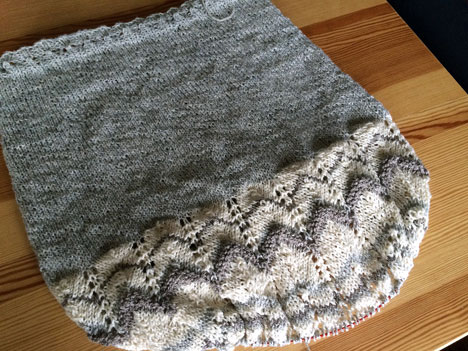 i stayed up late friday to knit and then first thing saturday morning, i was back on it i’m working mine in stripes as in the original, but cherie is neck and neck with me on a solid version for photography.

stopped here because i teach a class on saturday morning, but when i got over to the shop and sat with erica for a while, we both realized we forgot that there was no class yesterday. DUH. back i scurried to my skirt knitting—never waste found knitting time. 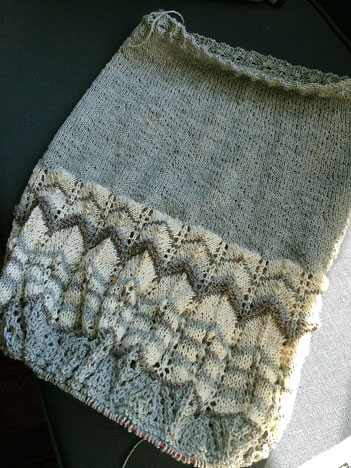 i admit that i was obsessed yesterday with finishing it; i didn’t get up off of that sofa til it was done. i’m only a little ashamed that i stayed inside knitting for hours on such a fine day, instead of joining david for an evening bike ride; hopefully the exercise and weather gods will understand and not rain down wrath on me for wasting it. 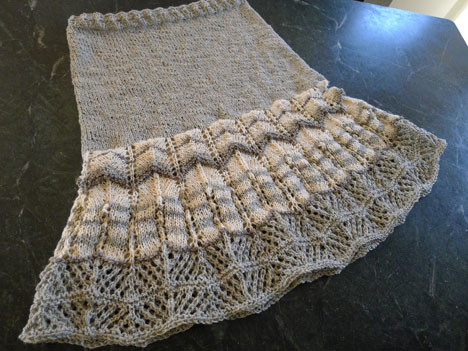 it was off the needles before he even got back and long before dark. i decided to wait til today to block it, since i still had to knit the i-cord drawstring.

the difference between the unwashed gauge and the washed gauge of this fabric means that the final results seem very uncertain until i can see them with my own eyes. much as i loved the way it looked, i thought i was in trouble with the size—it seemed awfully narrow through the upper skirt to me and indeed, it measured several inches too small at the hip.

but i believe in my system of heavy swatching and have had good results so far with it, so last night i drowned myself in my next project (and maybe a little chocolate) and tried not to think about it til i had soaked it. 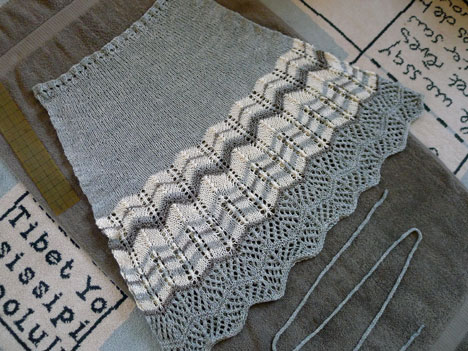 if you lay it down very carefully while wet and leave it undisturbed it will look about as good as a wrung out dishrag. so don’t be shy—have at it. the lace edge doesn’t need pinning; it will scallop very nicely on its own or with a few tugs (and you don’t want to fuss with that anyway, right?). alternatively, i bet you could throw this in the dryer for about ten minutes to get things started or at the very end to bring back the yarn’s loft—with so little wool content, a few minutes probably won’t hurt it. i meant to try it will this skirt but i guess now i’ll wait til after we photograph it.

interspersed with the skirt knitting, i’ve been working on a shawl project with this incredible shade of turquoise nona, from spirit trial fiberworks. this is jen’s corfu colorway—it’s the sea in my hands, haha.

this complex shawl project has been growing slowly since before i left for NYC. the knitting itself is not difficult—it’s the pattern and charting that’s kicking my butt all over the place. i have to chart a bit, then knit a bit, often knitting right at the computer so i can correct as i go. 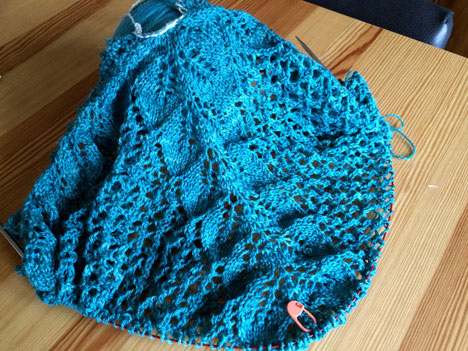 by the time i got home i had solved the first hurdle and moved on to the next, much bigger one—which is that the shaping is not any of the usual types that i rely on, but more embedded in the motifs themselves, so tricker to work out (and thus, more ripping and redoing). 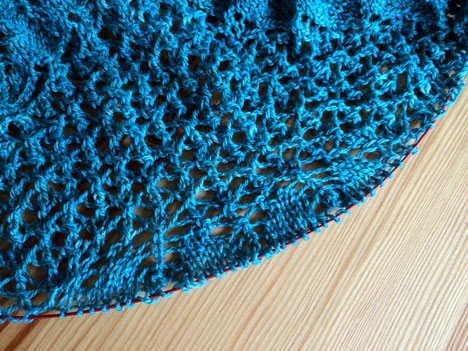 by thursday morning some larger forms were beginning to emerge from the mesh background—don’t ask me how many times i had to restart this particular segue, but suffice it to say the i used my lifeline several times.

my aim is to create a composition on a mesh background that appears to have layer upon layer of large flower and leaf shapes exploding out from previous sections. 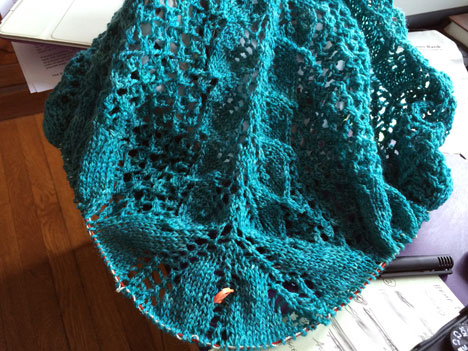 by thursday night i had gotten through the first layer of bigger leaves and felt like i understood much better how the shaping should be worked into the motifs. i’ve actually made a lot of progress just getting over that hump! and don’t get me wrong; i enjoy this, haha. i wouldn’t set such challenges for myself if i didn’t.

the knitting is seriously so much faster than the charting; i’m halfway through the next big section and looking forward to finishing that after i write this. it will be wonderful to knit through what i’ve put on paper to see if it works.

i’m thinking that i might have to knit the BNW sample myself just to be sure i’ve got it right; i don’t know if i want a test knitter to have to knit it until after i’m sure (i like being able to make corrections as soon as i see an issue, not matter what time of night it its, hee-hee).

so that’s my project in progress at the moment—what’s next?

wee-eelll, i’ve had this design in my head for a while that i had hoped to squeeze into the spring collection. it was on the boards as definite, but then when i came back form NYC i wasn’t sure it would get done. and now that i finished a sweater, a skirt, and my shawl is nearly under control, i’m kind of feeling like i might be able to manage it. 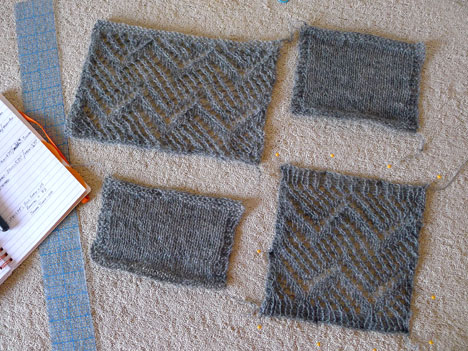 i won’t say too much more about it now except that i love this chevron motif from my trevi shawl design—i always like a nice, abstract pattern without narrative like this ancient zigzag motif. it’s perfect for what i have in mind, having a lot of open area and some shadowing between repeats. 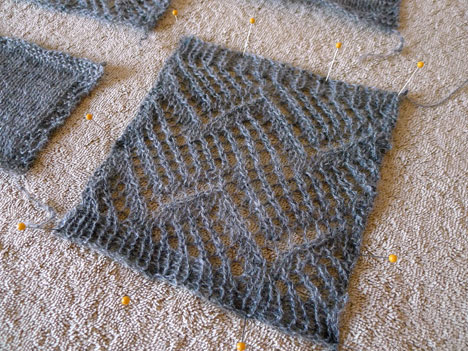 my swatches tell me that the stockinette gauge and the openwork gauge are quite different from each other, however, and my project has a mix of both so i have to think about how i’m going to handle that and if i can make it work throughout the piece. i can let that perk a bit at the back of my mind while i work on my shawl pattern some more.

next time i’ll update you on how that all shook out and hopefully, i’ll have a better photo of the shawl as well, so you can see what the heck i’ve been babbling about.

now i need to go off and order my garden seeds; david has spent the afternoon outside getting the beds ready, so it’s time!