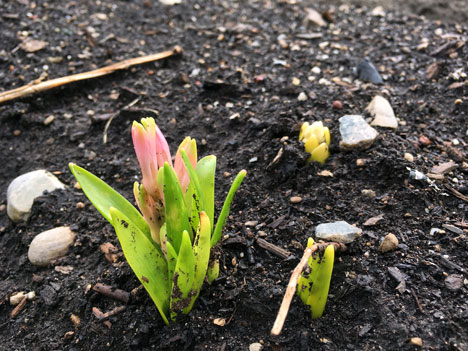 our current weather theme is holding—days that are sunny and warm alternating with days that dip down to near freezing. the plants have been reluctantly opening their buds one by one, only to have their flowers torn to rags by the wind, which is mostly ferocious on any day. 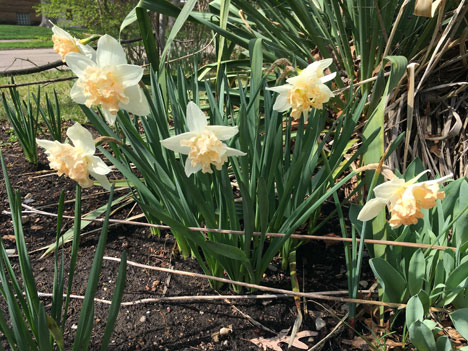 the poor daffodils are few in number this year and i can’t help but wonder if they are getting destroyed before they’re even fully open. or maybe they are just wise enough to wait til things calm down, who knows? 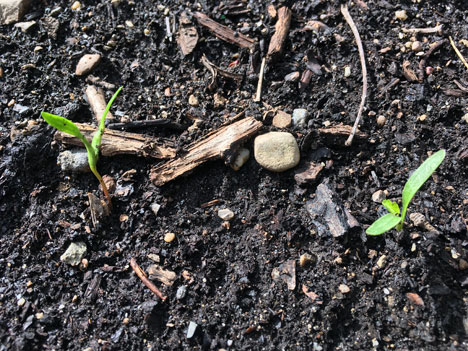 the spinach and chard seeds i tossed out into the garden on monday are sprouting already—i’m excited! now if i can get david to make a spot for peas, i’ll plant those next. i should get the onions and potatoes in too—and maybe parsnips . . .

thank you for your enthusiastic response to my new hempshaugh skirt. you wanted to see it “on”, so here you go. 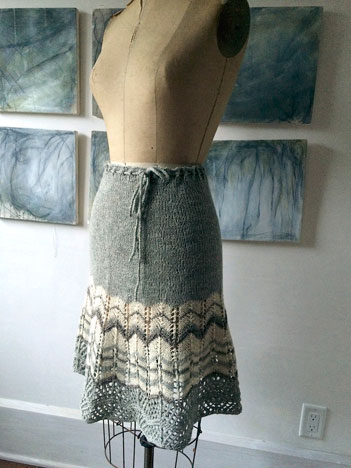 i even got a chance to play with making outfits 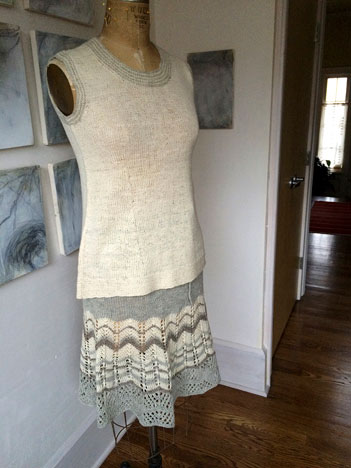 i love it with the salt & pepper top which is also knit in hempshaugh laceweight. i think i’ll be wearing this combination a LOT—it’s simple, fun, and oh-so-comfy. i haven’t had a chance to get them together yet, but i bet the skirt will look great paired with janet guthrie, too. 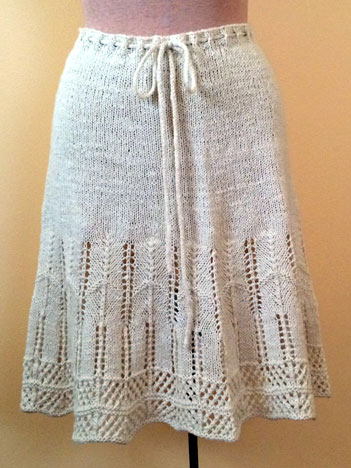 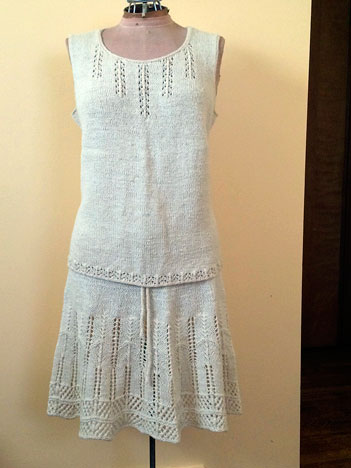 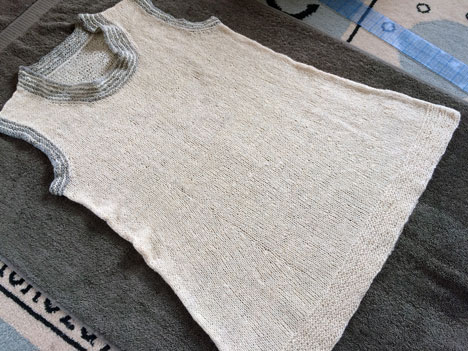 i washed up that salt & pepper top yesterday after reknitting the neck finish, which did not turn out as loose as i wanted it—it should be loose enough to tip forward just a bit from the neck at the bottom of its U shape.

the hemp fabric is a little unruly when it is very wet. so i always start out by squeezing as much moisture as i can from the fabric and then treating it to some vigorous reshaping—quick tugs to the fabric in all directions and a few good shakes. then i lay it down and shape as best i can to the desired measurements.

as it dries, i pick it up several times to fluff and reshape and voilà—eventually it shrinks back to a uniform fabric that hangs beautifully. 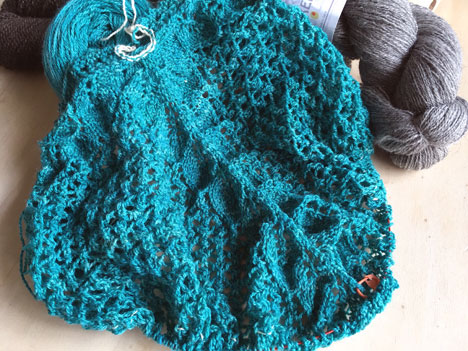 even though at the last writing i thought i was over the hump, my biggest challenge this week has been my shawl project. 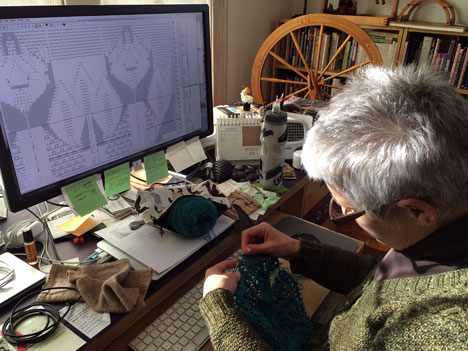 by mid-week i had charted myself into a corner but was still doggedly carrying on, convinced that i was on the right track. finally yesterday i came to my senses when i assessed what i had completed and did not love it. at all. sigh.

so i proceeded to scrap a substantial amount of the work i had—most of my working hours over the last two weeks, in fact. (i was actually more than halfway through that chart, grr). and even though i was enjoying the work, it wasn’t pretty—oh NO!

the good news is that i was able to salvage the first two sections i wrote and after ripping back yesterday morning, i rewrote a new section fairly quickly. sometimes, a project is just like that—kicking and squirming and hateful to me nearly all the way through and then finally, submissive at the end. 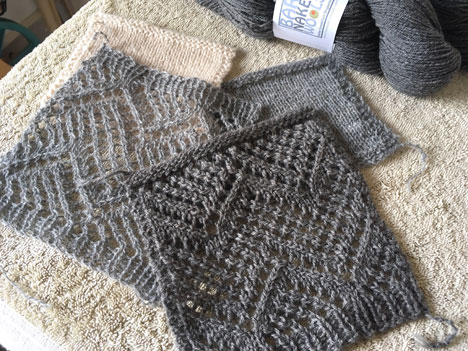 i gave myself little consolation treats every few hours over the last two days by working on a wild card design for the spring collection—one that i wasn’t sure i’d be able to squeeze in, but now looks like a reality. i showed you some swatches the other day in chebris lace, which is one yarn that it could be knit in 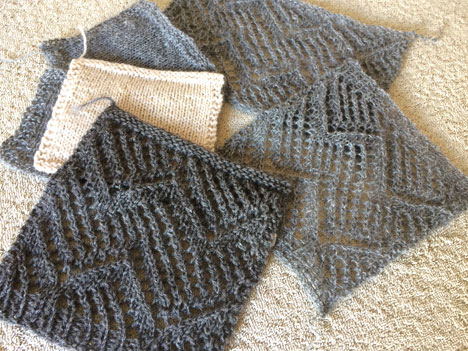 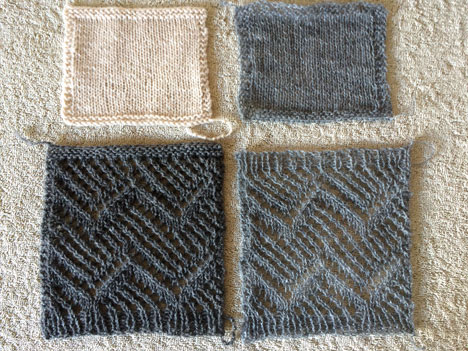 side by side, both yarn work up to the same gauge (though on needles one size apart), so i’m comfortable recommending either one. 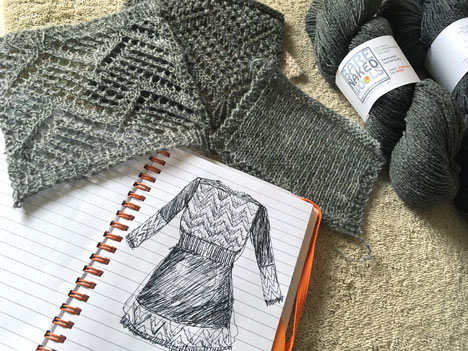 the sweater will be mostly plain stockinette with the back in the lace fabric above the waist and lace at the hem and lower sleeve. the back hem will curve downward via short row shaping though not as long as the sketch implies; probably just below the low hip in back. 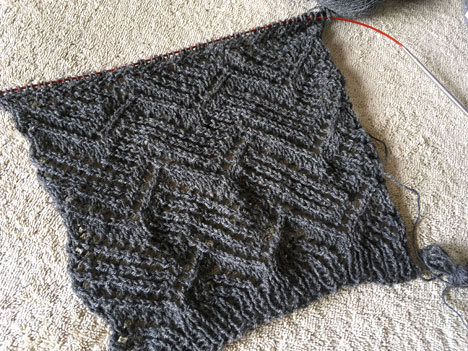 after all of my shawl charts were done last night, i treated myself to starting a sleeve for the sweater while we watched TV. it is of course quite misshapen, but i think it’s going to look spectacular in the poppy seed shade of the BBF yarn.

this morning i got up and got to work on reknitting the shawl; the new charts are working out great so far. i’ve already reknit most of it and am much happier with what i have now. it won’t be long before it’ll be done i think. yay. 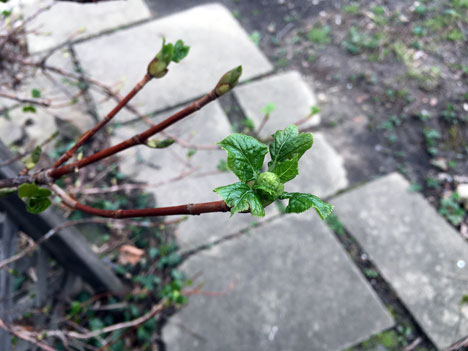 the weather is turning nasty out there and the temperature is dropping once again (after starting out as a really nice day!). i plan to spend a lot of time knitting this weekend so i can get these last two patterns off to tech editing. if we do get a break in the rain, i’d like to get some seeds in the ground . . ..we’ll see. 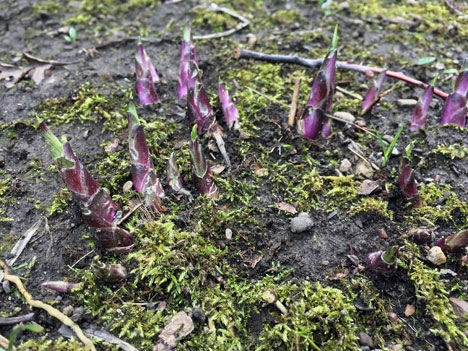 7 thoughts on “out of the old rises the new”