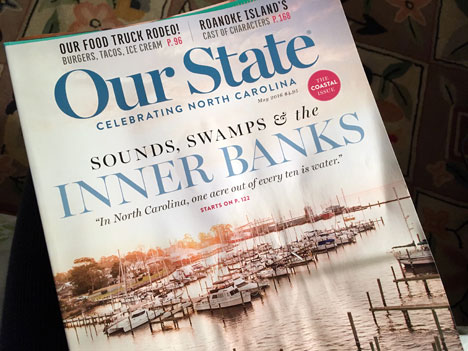 i was lucky enough to spend the week following the maryland sheep and wool in coastal north carolina, on a sort of working vacation.

i’d been to myrtle beach many years ago, before it was filled completely with high rise hotels and enjoyed the ocean there very much, so i had been looking forward to this week for some time, using it as a carrot to incentivize me through the nonstop weeks of april and may. 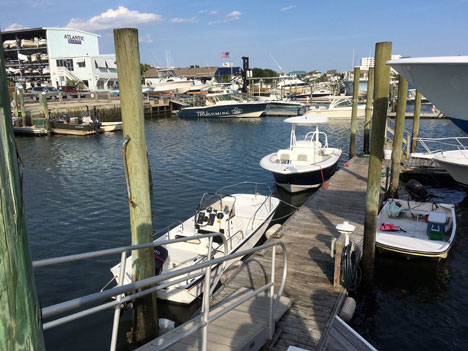 it was as beautiful as i remembered; the weather was sunny most days and warm, with a few cooler, rainy days mixed in.

it is late spring/early summer there and gardens everywhere are simply exPLODing with life—during just that week, the jasmine, dogwoods, sunflowers, hydrangeas, magnolias, and many other plants were blooming. katharine’s almost grass-free yard and garden was a woodsy wonderland of discovery, with new flowers blooming every day. 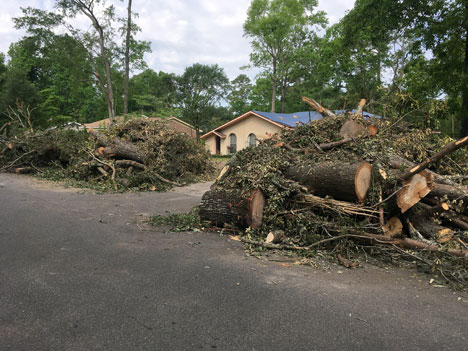 there was also the fallout of some freak tornado activity that ran through town just before we got home from the sheep and wool event—which thankfully left her property untouched, though some near neighbors were not so lucky. 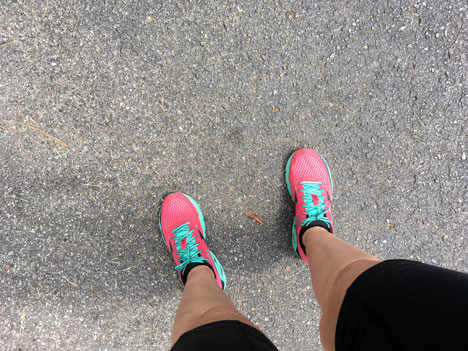 i finally got back to some regular running as well, which i had to put aside for a couple of the previous weeks, despite the fact that i really depend on it for keeping balance in my life. i even got a little sun color to show for myself. 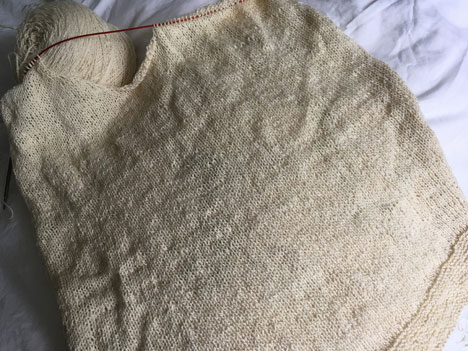 before we left home for the maryland show i had cast on for a salt & pepper top to take along in my travels—this project is an easy-peasy knit that can go anywhere, so i made great progress on it during the truck ride over and in the evenings over that weekend, knitting along with barb and erica. i’m knitting it up in the millet shade of hemshaugh lace with plans to stripe the neck and armhole finishes in the buckwheat shade (just as shown on the pattern cover). 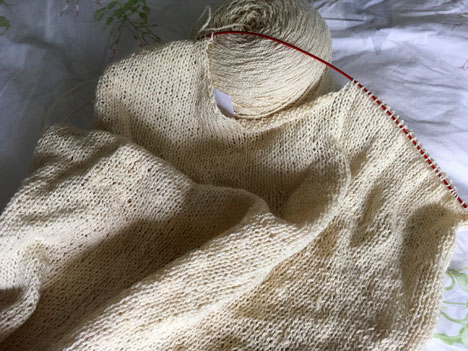 by the time i got to katharine’s i had just a little more to go on the main pieces. it looks funny here on the needles where i was working up one side of the scoop neck while leaving the other side to wait, but that all evened out in the end. once i had the last bit knit i put it away to finish up at home (see below) and moved on to a pullover project. 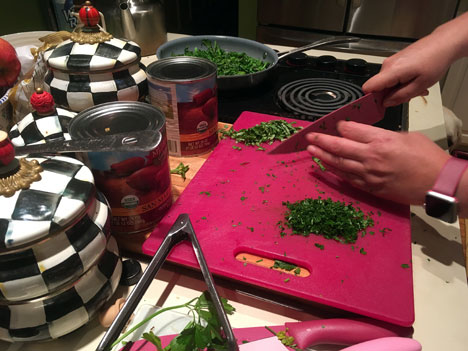 katharine and i were spending the week together to devise and test all the recipes and menu items for our pairings club, which will start shipping in july. so it was a week of cooking and tasting things that are in season! 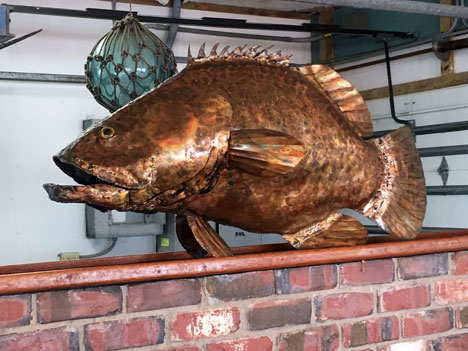 first stop was the fish market, to get ourselves some dinner on that first evening. 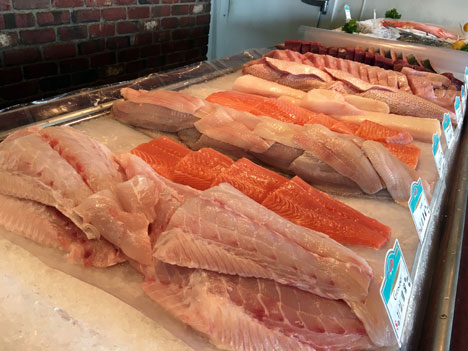 what a spread—everything was super fresh and yummy looking. we took home a nice piece of grouper, but perused all of the other temptations with an eye on which we could include in dishes on our menu. 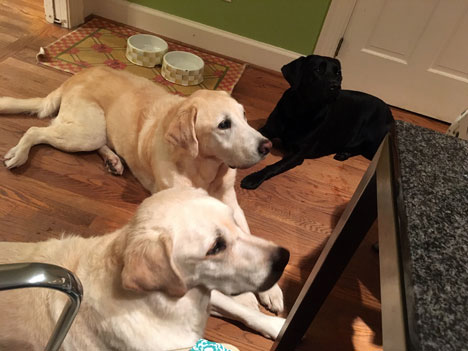 back home, i got acquainted with the “family”, three very large labradors, two boys and one girl—rex (alpha, oldest), jackson, and peppa (yes, named after the pig; need i say more?). 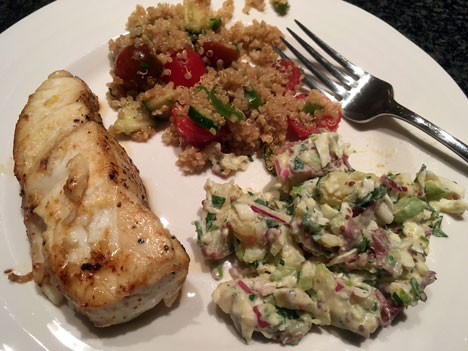 katharine cooked up a lovely dinner to start off our visit (none of this is on our pairings menu—that’s a secret!). the grouper was amazing—as was all the fresh fish i ate last week. 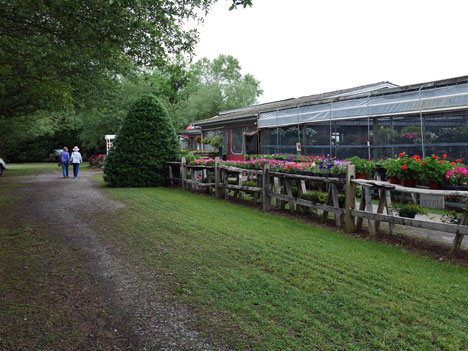 in fact, fresh was the name of the game that whole week, as north carolina is in the midst of their summer heydays—the time before the real heat sets in and kills off a lot of the vegetable producing plants. on another day, we took a trip to lewis farm to get some plants for her yard and to pick ourselves some berries. 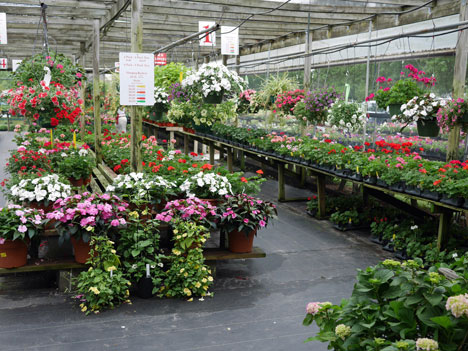 there was a gorgeous greenhouse display of annuals and perennials at the peak of their beauty. 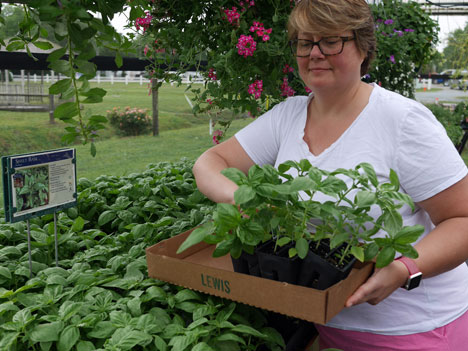 katharine picked out some basil and other herbs for her yard. 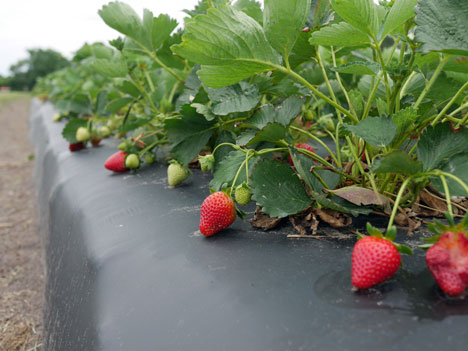 what gorgeous berry fields they have there and all of it looked so perfect. and everything tastes as good as it looks—you can try the berries from a basket at the counter when you first come in. 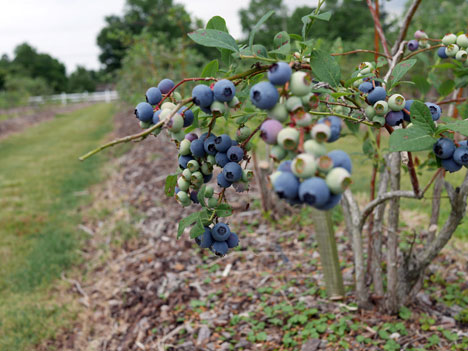 the strawberries were still very plentiful and the blueberries were just beginning to be ready for picking, with probably a few weeks of harvest ahead. 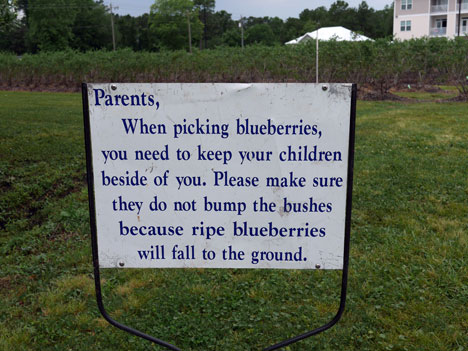 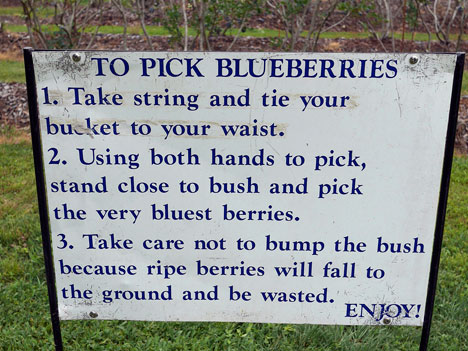 my favorite thing there was this pair of signs, posted one after the other just like this: 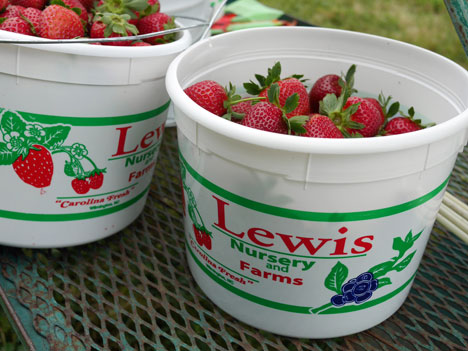 we didn’t get a lot of berries or stay for very long, but i did want to go back inside for one last treat that they are known for 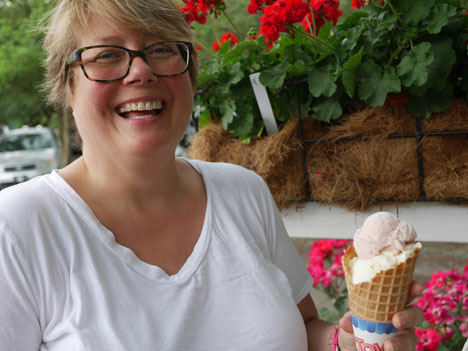 katharine agreed to pose with my cone of homemade ice cream—made right at the farm with fresh strawberries (top scoop only asi am a vanilla freak at heart; i try it out at every new opportunity).

you can also buy pre-picked berries, preserves, and hand packed ice cream in containers to go. unfortunately the weather did not conspire to allow us a longer stay—in fact it began to rain just as we were pulling out of the parking lot. but we had work to do at home anyway. 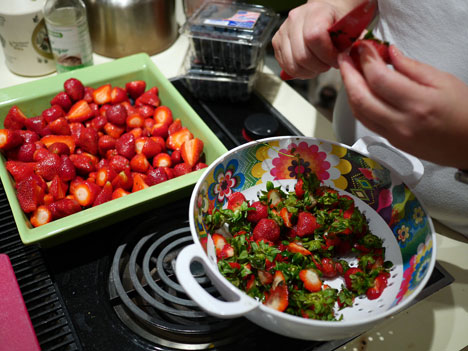 katharine was expecting delivery of a new sofa that day so while we waited for it, she set to work cleaning berries for a dessert treat (also not on our pairings menu, but we promise there will be another yummy and unusual dessert!) 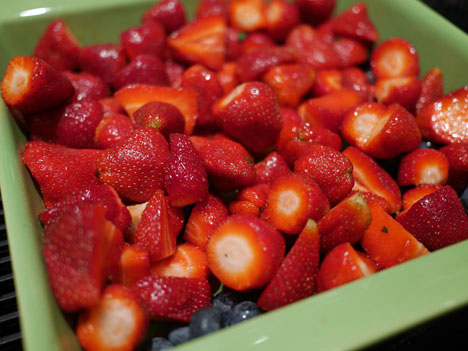 believe me, it was hard to pass on these berries as an option. instead we taste tested them for you in a gluten free berry crisp 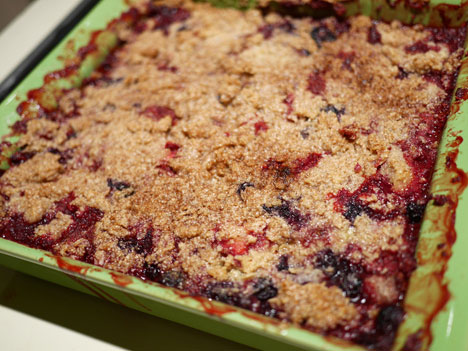 a delightful scent was soon filling the kitchen as it baked. we worked on another dish while that was in the oven. 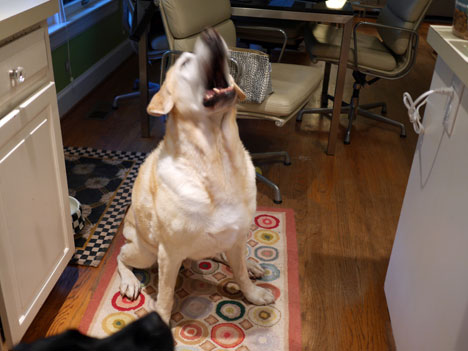 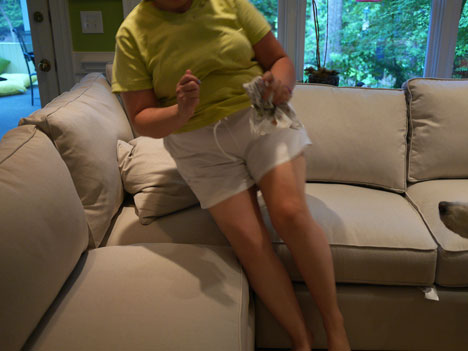 when the sofa arrived, i took some photos of katharine taking her first leap onto its pristine cushions. 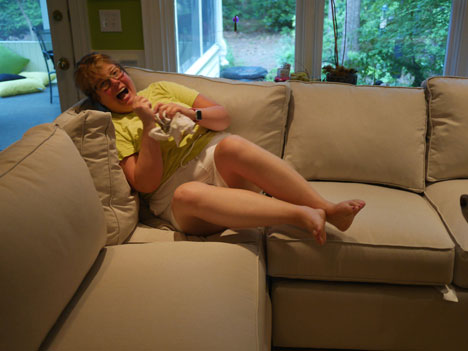 which the dogs found endlessly confusing and amusing. 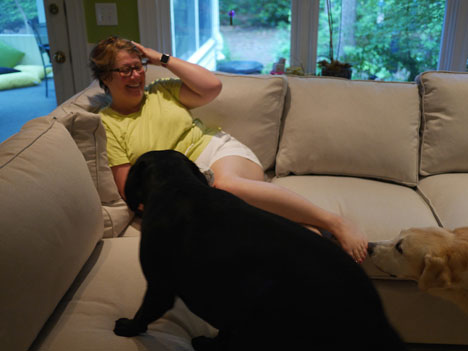 since she tried to keep them off of it for at least one day, haha.

they weren’t quite down with that, but they obeyed . . . for a day. we found black hair on it by the next day, haha.

katharine pulled out the wheaten blanket she is knitting in our chebris worsted, an ongoing project that she hopes to finish by fall so she can use it on the new bed in her guest room; it will coordinate well with the beautiful charcoal tweed fabric headboard. 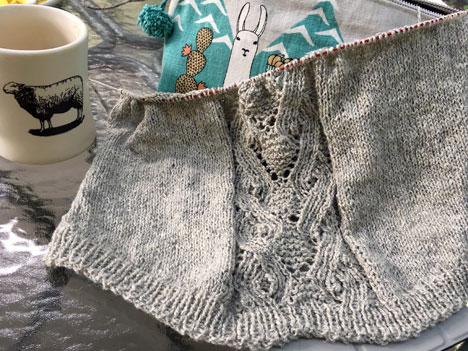 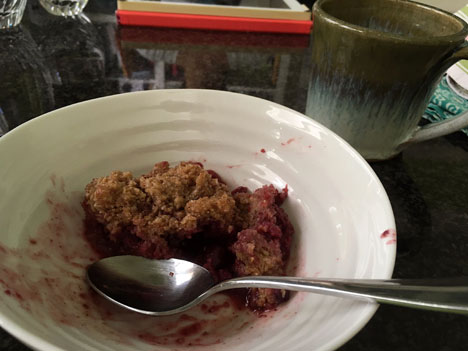 i worked soon it a lot during the week in the mornings, fortified by the breakfast of champions. we did lots more cool stuff through the week which i will catch you up on in the next post. and i’ll show you the results of my north carline knitting, too. see you sunday!

6 thoughts on “NC is berry nice”