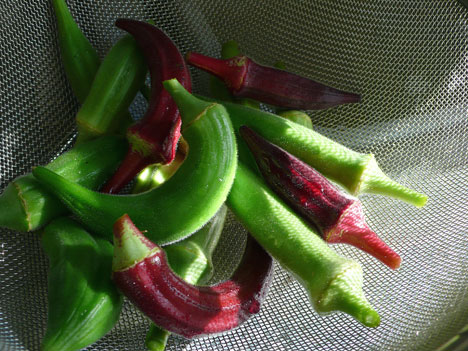 oh, groan, i can’t beLIEVE it’s the close of labor day weekend already; where did the summer disappear to? and each day zooming by so fast . . . next thing we know, it’ll be easter. 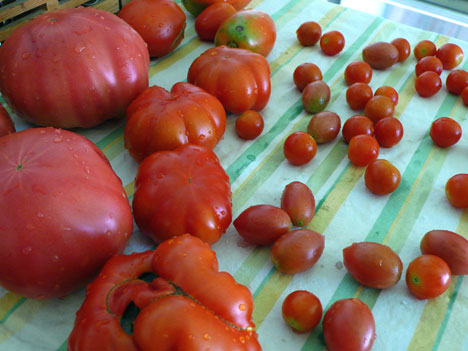 hour by hour though, it’s hard to stop and savor the time as it passes—it’s all i can do to keep up with what’s on my plate. as dry as it’s been, the tidal wave from the garden has slowed a bit, but still it’s still keeping me pretty busy. we are in the weeks of its highest production—okra, peppers, tomatoes, and eggplant abound. greens, not so much right now, sadly, except for the zen greens—i think they could survive the apocalypse. 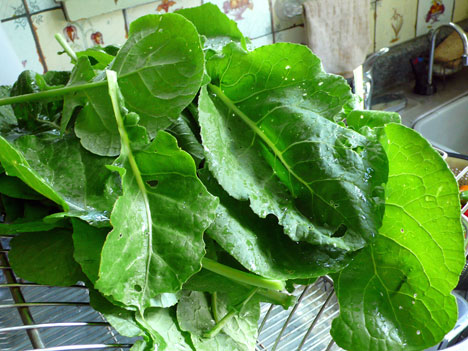 on saturday i put away a couple more bags of these, along with two bags of okra. i roasted some tomatoes and then made a big pan of stuffed peppers to take to the neighbors picnic last evening. 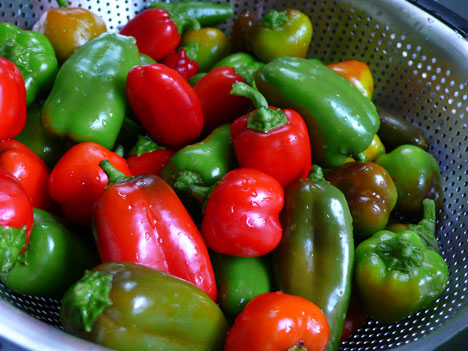 haha, we always end up with hundreds of peppers—way more than we can ever eat; i wonder why they like our garden so much?

actually, we ate very well from the garden all week, supplemented by the stuff we brought home from the farmers market last weekend. 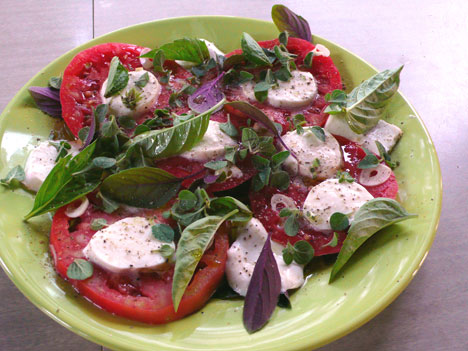 susan arrived at spinning class last sunday with a container of fresh mozzarella for each of us (thanks susan!) and we had a salad like this a couple of times this week. this one was made with the caspian pink tomatoes—large, sweet, and meaty; not too acid. 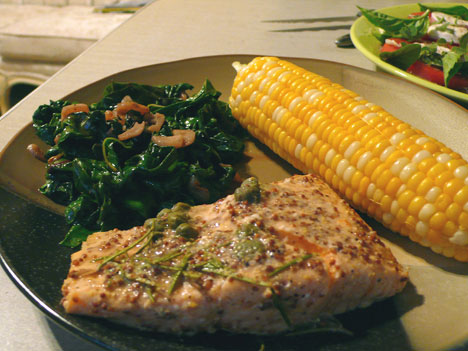 one night we had sweet corn, greens, and salmon with it. and a couple of other nights, we had ratatouille, made fresh with eggplant, squash, tomatoes, peppers, basil, and an onion.

and i have all the same ingredients to use this week in a curry, swapping out the squash for some okra. it feels positively luxurious to eat this well—i’m probably the only person i know who gains weight in the summer and loses in the winter, haha. 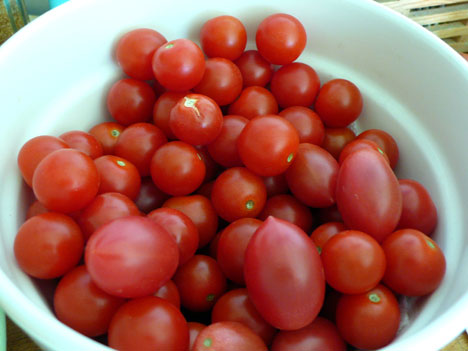 but never to busy to knit, right??
with the pattern releases we had last week, it feels like ages since i talked about projects in progress, but they are moving along (and yet, i feel perpetually behind; what’s up with that?)

i finished the front of my bel air sweater sometime last week and blocked it, so i could be sure the gauge was working correctly in the patterned stitch (it was; yay!). 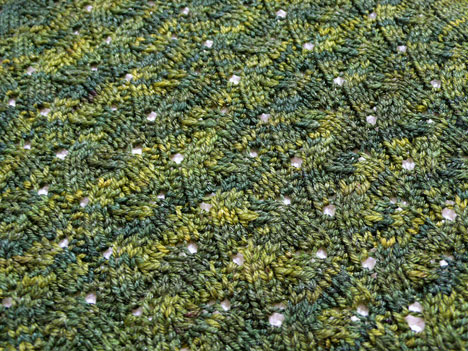 i just love the fabric in the patterned part . . . so yummy. here’s a much better shot of it unpinned in natural light, with the buttonbands added. 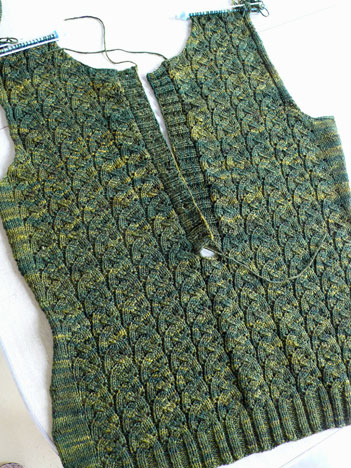 normally, i’d wait and do these at the end, but i needed to make sure that the pickup numbers i wrote into the pattern are right.

and now i’m working on the back piece 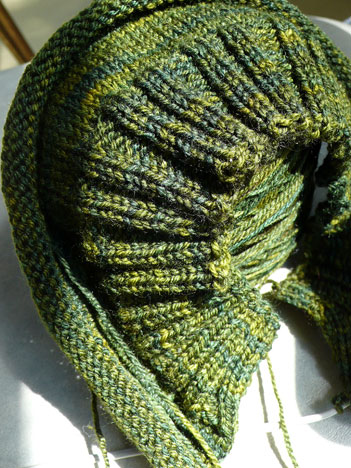 hopefully, i’ll have a finished sweater by the end of the week. i’m trying to bang it out because i also need to confirm the pickup numbers for the collar, heh.

i wrote up the pattern and sent it off to tana for grading and tech editing and by mid-september, barb should be working on a test knit. i went over to beckie’s today to knit for a few hours and added a few more inches—almost to the waist now.

i’m working on other things too—i can’t be totally monogamous to the sweater because i need to keep other projects moving or we’ll have some gaps (sigh, i’m already behind on pattern writing and photography, but i’ll try not to bore you with the details).

one thing that i’m thrilled to have finished last week is my rosebuddie baby blanket—finally off the needles. and then it had to sit for a few days before i could block it. we have some behind the scenes projects going on around here that have been time-consuming (and will continue to be through this week; but it’s all good stuff).

anyway, this morning, i finally made time for it—first thing after i got up, i put it in a mesh bag in the washer to soak, swish, and spin. and hour later, i was pinning it out.

i just love it. it was super-easy to thread onto the blocking wires and after that, it was a simple matter to pin it our in all directions from the center to make a beautiful square.

the yarn, fearless fibers MCN luxury, is a superwash blend, which means that it grows a lot in the wash. but it also tightens back up nicely as it dries, so i didn’t stretch the blanket to its limits.

in fact, i pinned it out to the measurements i estimated in the pattern, which left a bit of ease in the fabric—enough to allow the texture to stay intact. as it dried, the yarn contracted a little and now the stockinette surface looks perfectly flat and smooth, while the garter texture stands out nicely (instead of being flattened by too much stretching). 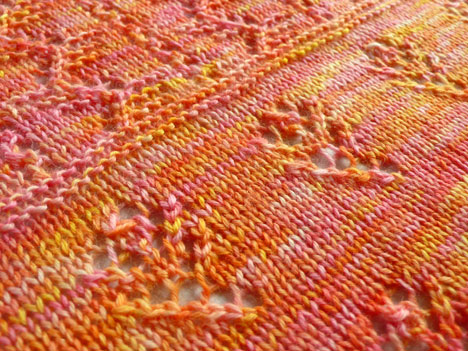 and this color—chastity—i still adore it, after all those hours of knitting with it in the evening heat. it’s just one big, happy grin, isn’t it? 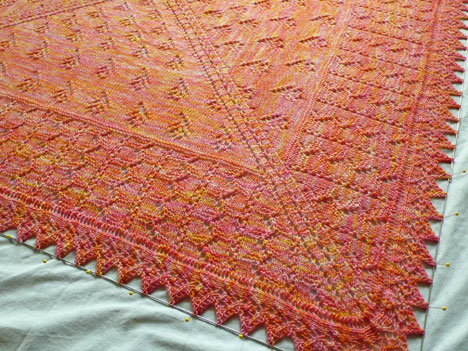 (note to self: from now on, blankets—even small ones—are designated to be winter projects).

the edging is adorable—i think it turned out well, but i decided to make a small change and add a little more garter stitch, now that i see it blocked out. this will help keep it very flat in the spot nearest the hem join and also make the rosebuds stand out just a bit more.

ready for the money shot? 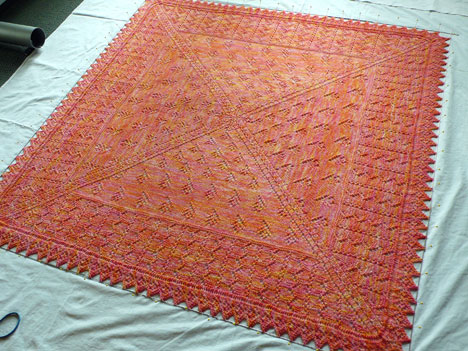 there it is—45 inches square. this size required about 3.5 skeins of fearless fibers MCN luxury, colorway chastity, for those who will ask . . .

the pattern is pretty much ready to go, but i need to get official photos, which may take a couple of days, so your patience will be appreciated.

now i have another surprise for you—are you ready??

karolyn sent me her blanket last week and i took a few advance photos of it, too

how cute is it in green?? she knit the small size in MCN luxury as well, in colorway meadow. 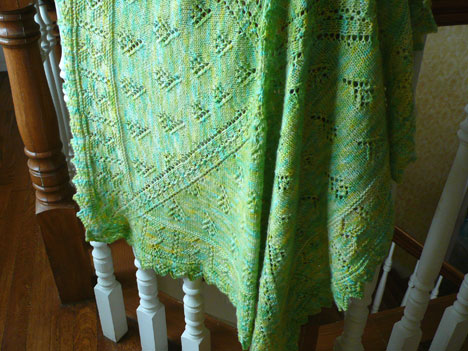 this one is 36 inches square and requires three skeins of yarn. isn’t it cool how the change in color has such a big effect on the result?
i love that about yarn!

haha, it’s like having a little lawn at your disposal for anywhere you care to put it. (no worries karolyn, i won’t walk on it). 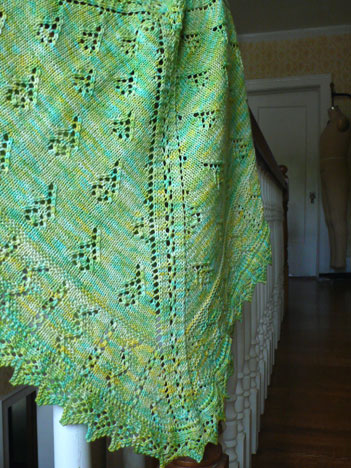 so, like i said, give us a week or so to catch up with ourselves on photography (we are backlogged with photo projects at the moment). it’ll be worth the wait.