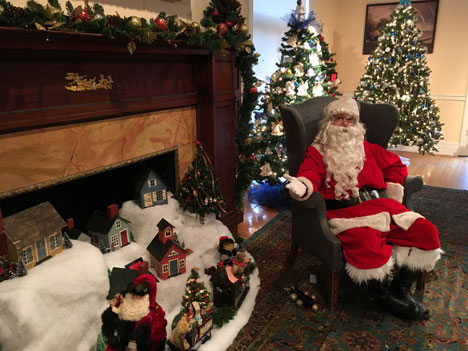 ok, i’m not ready for santa claus with all the trimmings including a couple dozen trees; actually i don’t think i’m ever ready for that, haha. i like plain and simple christmas style—oranges stuck with cloves, bunches of rosemary here and there lots of yarn and projects lying about, some baking—more frontier style than victorian. but during the museum trip at the end of our albany visit, we ran into him so i snapped a photo. and in the lobby, i bought six raffle tickets for five dollars and stuck them all in the container to win “death by chocolate”. hey, you never know . . .

the next day we were on our way home, where a very busy week and some treats awaited us. i managed to finish my herringweave cardigan before we left—in fact just the afternoon before i left. i did have time to soak and wash it, along with a few other garments and left all of those spread out to dry while we were in albany. i was, therefore, excited to get home and add the finishing touches. 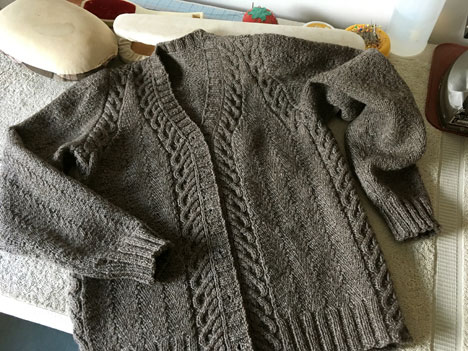 i love the way the sweater turned out but it couldn’t be photographed without buttons, so that was one of the the first tasks on my to-do list.

i had a half dozen options, but right off the bat i knew that many of them wouldn’t work; either the color or the size wasn’t right. i liked two the left and middle above so i proceeded to photograph them laid out on the button band for assessment.

first the darkest black horn buttons; while i often do like a higher contrast button, i wasn’t crazy about that look for this sweater and i finally realized why—they compete too much with the cables, i think.

next i tried the smaller auburn bone buttons (middle photo above); while these were better in tone, they just felt a little blah to me, a little too plain. i didn’t have anything else in my button box that was better so i ran over to the shop to root through the button inventory—we have a few odd lots and sometimes there’s a treasure among them. i found a packet of caramel brown horn buttons (far right photo above) with a dulce de leche swirl—six in all—just the number i needed. fingers crossed, i ran back to the house to try them (because bringing the sweater with me would have made WAY too much sense).

success—i love these. they pick up on the golden tones in the yarn but also speak to the streaks of gray and the dollop of creamy accent on each one gives them some dimension without distracting from the cables. 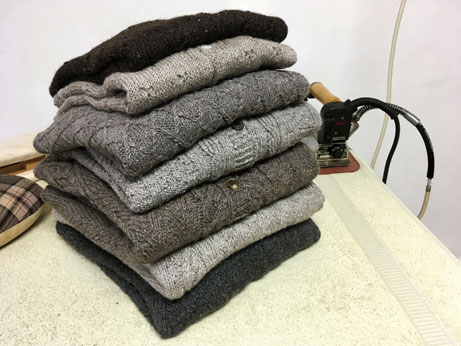 and with that, my ensemble garments were complete as well as a couple of extra pieces to release early next year. five of the sweaters in this stack are ones that i knit, all of them completed since mid-august. the other two pieces, a skirt and a pullover, were knit by barb and cherie—who saved my skin by taking them on. 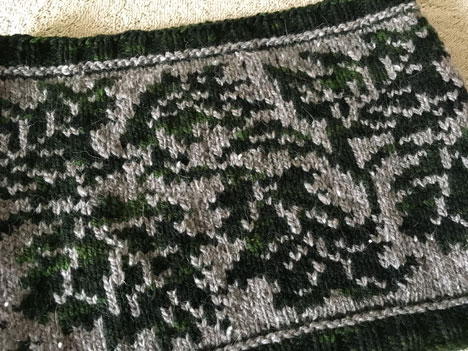 one of the other nice things about coming home from nearly a week away is opening the mail we missed; this time it was samples from vanessa for our november club projects—a pair of small sized mittens and the cowl that i added in at the last minute.

these stranded color work designs and the custom blackish-green colorway were inspired by the fall greens we used in our soup recipe for this installment—kale and broccoli raabe. the background shade of stone soup DK in granite, is like a wonderful artisan bread to dunk into the broth. 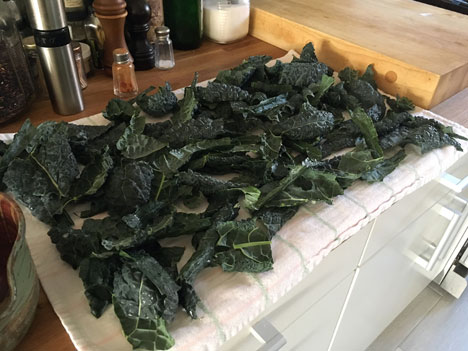 i got cooking as soon as i opened the package and put those knits into a bath to soak. 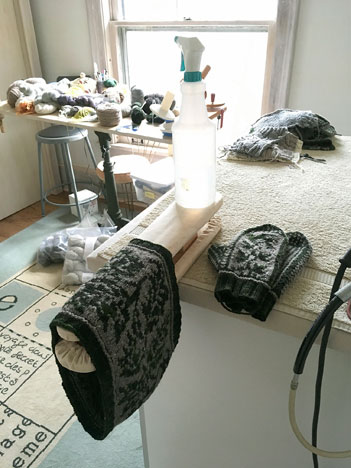 since the color work makes for a denser fabric, i rigged up my sleeve board to act as a support for better air circulation as it dried. it worked very handily, allowing the cowl to hang quite close to the hot air vent, where it dried nicely without creases. we will be photographing these tomorrow.

and all that kale in the photo above? 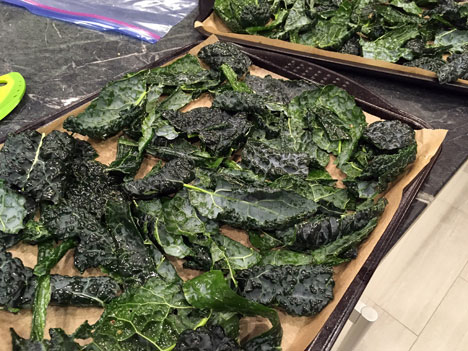 i finally got around to making kale chips with it. they were super easy to do (especially using the greens stripper we sent along as a club goodie) and we liked them ok, but thought they could be a lot more flavorful. next time i will try a stronger tasting oil (perhaps sesame oil?) and seasoning (with soy sauce or other asian condiments?).

another reason i was happy to be home? the food options are just better, haha. we had a huge week ahead of us and i wanted to cook up a few things so we wouldn’t have to cook at night while hannah was in town. 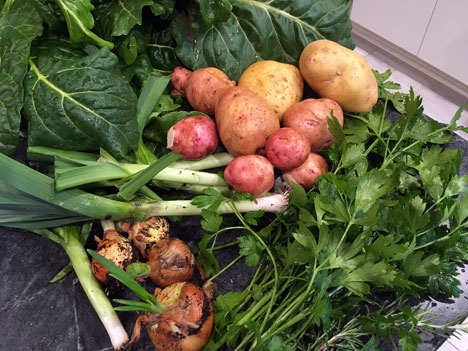 although it’s been pretty cold with many night below freezing, the garden is still putting out for us. the potatoes have been harvested for some time, but when i went out to pick greens, i also found a bunch of leeks i forgot that we’d planted and some onions that hadn’t been pulled. plenty of greens still available, too. i made a big pot of potato and corn chowder, YUM. i even roasted a head of garlic to add in. 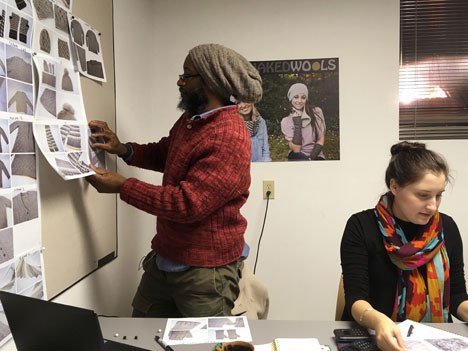 that afternoon hannah arrived and we all dove into a two-day planning meeting for 2017. we also had our ensemble photo shoot scheduled for the weekend. in addition, she trained us on some social media tools so that we can use them better (and so i can use them at all, hehe).

hannah left on sunday and since then, i’ve been working on the next few projects on my list.

while i’m not relishing all the crazy pre-holiday bustle at this very moment, i’m still itching to get started on some fun, no pressure seasonal knitting—it’s time for our red scarf run-up to new year’s. we are going to make another scholarship, you guys! 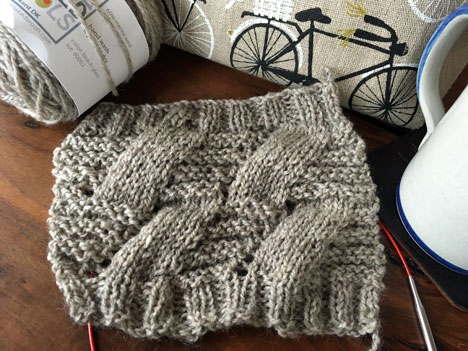 our special lot of red festivus 3.0 yarn is on its way to us and while i wait, i’ve been swatching. i love this stitch pattern—it’s quick, fun to work and completely in the spirit of our annual knitalong. this swatch is unwashed but i knit one in several shades of kent DK (that’s our base this year) 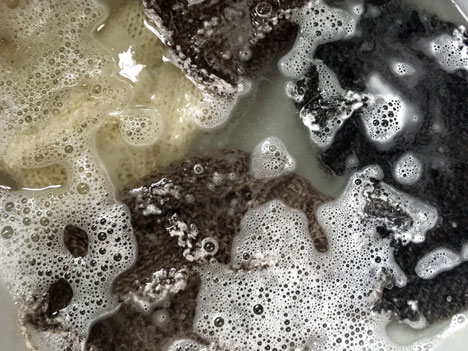 and after a nice long soak in hot soapy water (which i won’t do with the dyed yarn; that needs cooler water), they smoothed and straightened out a good deal. 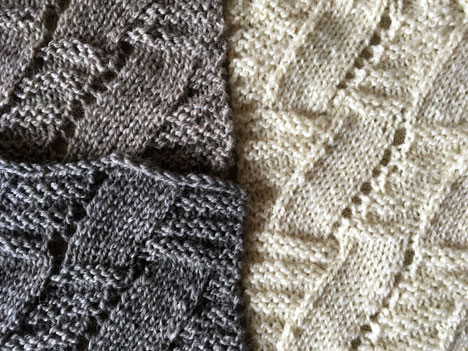 but not so much as to lose their depth or stitch definition—i love them.

the movement in this pattern is particularly festive and if our stars are crossed just right, will show off the yarn to its best advantage. because it has a special feature—that i won’t reveal just yet—which will accent those traveling stitches very nicely. 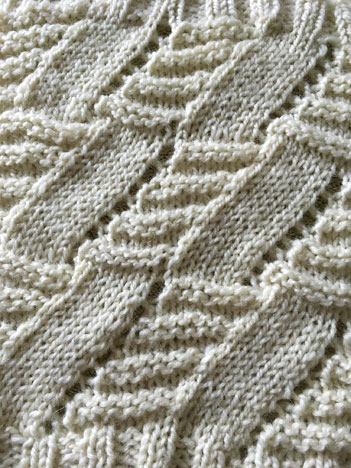 there’s just one tiny catch; because the YOs and decreases point in only one direction, this stitch pattern has a wee tendency to bias a bit to the left—not terrible though and i think it can be corrected by using blocking wires or by steaming well. at first i worried that it was a deal breaker for knitting a flat scarf (it’s a complete non-issue for the cowl version, since that’s circular anyway), but after working a good sized swatch and washing it, i think it will be ok. i tried reworking the pattern to stabilize it more, but could not come up with anything that helped. then i tried to find something else i like just as well and nothing really appealed to me.

the pattern is in tech editing now and i should have a nearly final version by wednesday (save for final yardages and measurements). as in previous years, we plan to release the pattern in this not-quite-final form so that we can all knit along together. because i love that aspect of this project; it’s my favorite thing about it! besides you know, the scholarship total at the end.

as in previous years, we will have patterns and yarn kits for sale to raise money for a knitspot scholarship to benefit our sponsored student through foster care for success. i’m writing up a separate post with all the information, current details, and background of this project so that it’s ready to go as soon as we have everything in place.

erica has been creating listings for patterns and yarn kits, including the drop down menu options we used last year so that knitters can add a donation to their purchase.

i’ll be back with a post devoted entirely to this topic as soon as it’s all put together; i can’t WAIT to share it all with you! but until then, maybe you’d enjoy some roasted garlic? 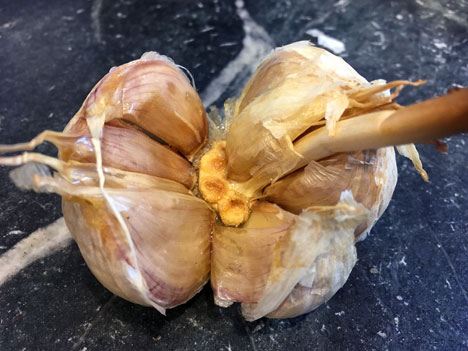