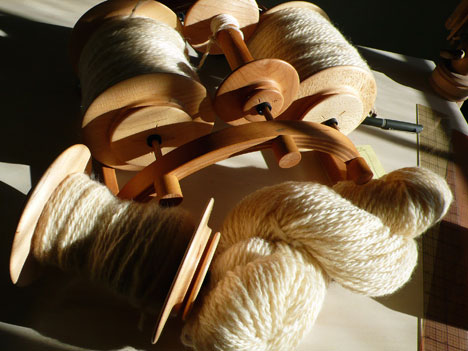 i have not talked much about spinning over the summer, even though it has been part of each week’s fiber activities. we continue to meet every sunday (or wednesday or thursday, when i’ve been traveling). we miss anne marie terribly and cannot figure out what to do about her empty chair; susan suggested placing a sweater and a pair of glasses on it, sort-of like an anne marie effigy, but that just felt so . . . hollow. then we thought maybe we could put the computer there and skype with her while we spin—this has more appealing possibilities, so we’re working on it (anne marie, we need your skype address!).

all foolishness aside, i managed to finish spinning up my white romney project over labor day weekend—i plied all my singles, enough to fill four jumbo schacht bobbins with a soft, chunky weight yarn. now it just needs to be skeined up and washed. if it was winter, this would probably already be accomplished, but somehow in summer these little tasks get pushed aside when i notice that a batch of tomatoes is urgently ripe or that i have a whole bag of okra to take care of before it rots. 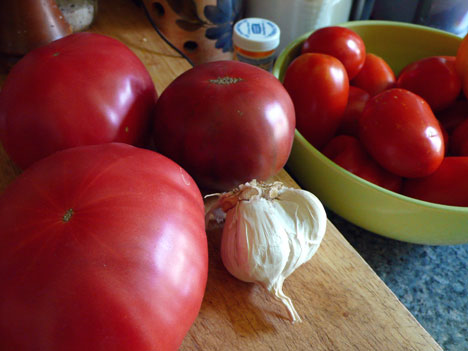 and so the yarn sits. but soon . . . after all, we are having excellent drying weather right now; it’s a good week to wash and hang skeins to dry.

and then there is the knitting—lots of it. i invested some time this week in swatching for a submission date that’s been looming, but by yesterday, i realized that none of my ideas was congealed enough to send off. i’m not really that good at proposals and submissions; i don’t generally sketch my projects out (i love to draw, but frankly, i suck at fashion sketching) and i have a very hard time packaging preliminary ideas cohesively. not to mention the difficulty of corralling my creative energy toward something that might or might not happen—i’m either ready to start now, or i’m not (so immature, i know). so i agonize over submissions until they all seem like dreck to me. at that point, i often abandon, haha.

who knows, i may still make this deadline . . . the swatches are soaking, so we’ll see. 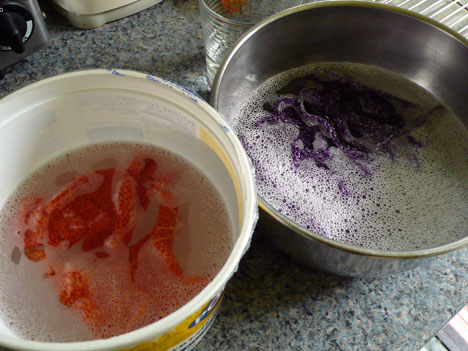 that’s why it’s important to have other projects that are going along swimmingly. early last week, i got a call from my friend erica at kollage yarns, asking if i could design a little shawlette for their spring collection. something simple to knit with two skeins of their yarn that a shop could build a class on, if desired.

now i was already thinking that i’d love to knit a shawlette with their creamy yarn; erica sent me a sample skein a while back and i often stop to pet it lovingly, while pawing through my stash on other yarn errands. it’s incredibly soft—like a baby’s cheek. 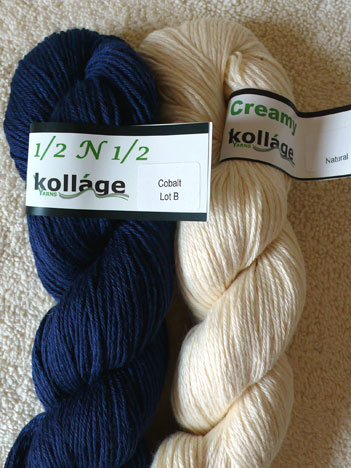 the fiber is a blend of milk and cotton, which appeals to me on some deep level i won’t explore right now—suffice it to say that it feels good enough to eat.

as it turned out, this was just the yarn she was hoping to represent. so we made a deal.
a few days later, an envelope with two skeins of the luscious stuff in a gentle apricot color appeared in my mailbox. i had been browsing my stitch dictionaries for a motif that would show off the soft surface and subtle sheen of the yarn.

i finally settled on a variation of the leafprints pattern i published last year as a neckwarmer and mitts—i like the way this stitch pattern amplifies a soft fiber blend.

i cast on over the weekend and by tuesday, i was about 3/4s of the way to the hem and even had a pattern written up for the test knitters (we’re on a tight deadline here). last night, i had to quit just two rows from the end—i kept dozing off and it turns out, i can’t knit (much) while sleeping. 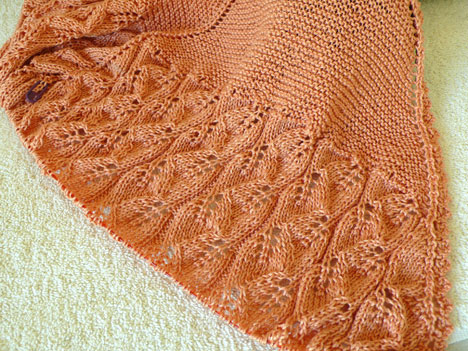 anyway, there we have it—soft and simple, worked from the neck down with two skeins of kollage creamy (colorway coral shores, or choose your favorite).

after i finish here i’ll work those last two rows and put it in to soak—i’m looking forward to blocking it; i love to see how different fibers behave, once they are wet and stretched.

this will be a great beginner triangle project, but also a fun quickie for a more experienced knitter. i won’t be selling this pattern in my own shop, but it should hit the yarns stores by springtime.

i’m also making great headway on the back piece of my bel air sweater—i’m almost to the armhole bindoffs, yay. i figure there is another two evenings of knitting on that and then i get to sew it up (i love the finishing work). i’m anxious to see how the collar i have planned is going to work out, so i’m motivated.

after this and the shawlette are off the needles, i’ll need another project or two, so i’m thinking about what to start next. i have one large shawl project that i’m finally ready to begin, after hemming and hawing all summer over the swatches (it happens). i’ll need some traveling projects too, since i’ll be traveling to teach in miami in just two weeks and after that, to a couple of other destinations in october (and of course, our fabulous annual rhinebeck trip is coming up).

i have to settle on an accessory to go with the little beret i have finished—i think it should be a set and i’m leaning toward wristlets at this point (unless you think it should just be a hat pattern?). 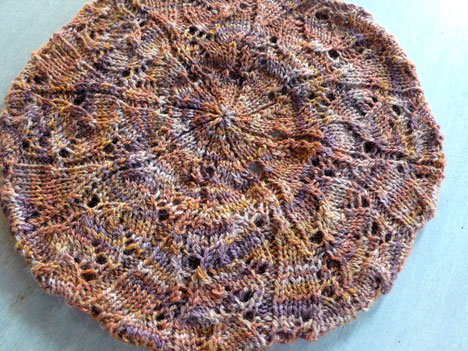 i was aiming for a little scarfy neck thing of some kind, but i’m stymied—the stitch pattern has a severe bias, which is fine for pieces worked in the round (like the hat, or a neckwarmer, or wristlets). i have a semi-formed vision in mind for this scarf, but i can’t see how the stitch pattern would work with it. if i can figure that out, i’ll move ahead, but right now, i’m coming up empty, so i might fall back on the wristlets.

wow, it’s starting to sound like i have a full day ahead and i didn’t even mention all the photos i have to edit today (i’m in denial about the photography pileup, but working on it). 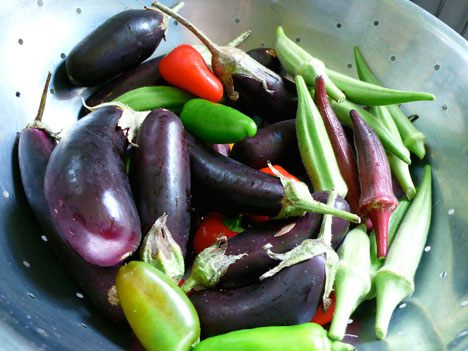 and i want to cook today, too—it’s great weather (cool and windy) for a spicy, vegetable curry. i have fresh little eggplants, okra, and peppers to work with, along with some roasted tomatoes i fixed yesterday. 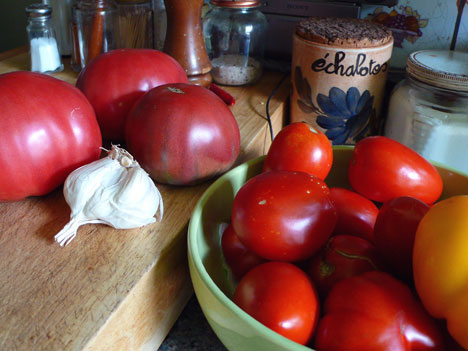 our garden was on a bit of a break last week so i didn’t have enough to process for the freezer, but the ones i had needed to be cooked soon. so i cut these up, tucked some garlic cloves underneath, and drizzled them with olive oil, then popped them in a hot oven.

when they came out, brown and caramelized, i separated the garlic and pureed everything else. that will add a real punch of flavor power to a dish or two, including today’s curry.

while those were in the oven, i prepared a pan of cherry tomatoes for drying

so that’s two things i don’t have to do today.
but there is that submission and the swatches are ready to pin out, so i better move along . . .