and that gets me excited—because FALL is knitting’s season to shine.
no, to preen, to sashay and to bust out singin’. i’m sure we’ve all bought or received at least one of the fall magazines, there is a distinct chill in the late evening air, and naturally, our thoughts are turning to what we will knit for fall . . . mmm—maybe it’s time for me to go up and commune with my stash, touch everything again, organize a bit, and do some daydreaming . . .

that means it is also finally the time to talk about rhinebeck (everyone else is doing it . . .)! my favorite show of all, and one which i try to never miss. i’ve been itching to talk about it for months, but it seemed premature. everyone was a little lackadaisical after the gluttony that is MD$W.
i had to miss rhinebeck last year because i had the opportunity to host my favorite brother and five of my sweetheart nephews and nieces that weekend. there are only a very few things that make me miss rhinebeck, and they are one of them.

NOT THIS YEAR! not only will i be traveling with my buds, but i have lots of new internet friends i am looking forward to running into.

beckie, annette, and i have had this trip planned since last fall’s show ended. in february we made reservations to rent a house for a six-day, five nights weekend (i know, but we need two travelling days). we are so psyched we can hardly contain ourselves. and to top it off, looks like we might be joined by monica from Two Left Needles.

i’d be mighty, mighty interested in meeting up with any readers who will be going!

alright, now, last things first! let’s put a lid on the red skirt story with a few pics, post bike-ride-and-class-attendance. this piece was worn on several trips between home and shop, and through several class session, and then around the house a bit (see what an unwashed slob i am willing to be for the sake of knitting research? pictures are all post-wearing).

but the fabric DID still feel nice, even after all that use. as in, this would make a great traveling piece (plus, no one could miss you in a crowded airport . . .). and the slip underneath is hardly noticeable, even in black. now this skirt, like the green skirt, did not bag out or reshape itself into a pumpkin through the seat, even after hours of sitting.

it DID lengthen a bit in the back, closer to the hem, but i do want to point out again that it rode 15 miles on a bike before that was apparent. today we are washing it, which should cause it to snap back to its original length, but i’ll let you know if that doesn’t happen.
speaking of the back though, it does this really cute swishy thing when i walk that is more sexy than being naked—even the girls noticed it, which is sexy, right??

david tried really hard to photograph that action, but this was the closest he came to capturing the allure. i got so much attention for this skirt while wearing it, that the other skirt almost doesn’t want to go out with me any more (i’m working on that; more diplomacy and less favoritism between FOs—check).

and speaking of sexy and stunning, kathy sent me pictures of her most recent FO

wing-of-the-moth shawl—done!! and by someone else, NOT ME (and hopefully, she is beaming like that because her new shawl feels so damn good (i mean. it must; she knit it in record time AND it’s gorgeous—what’s not to beam about?). i know you want to see more

and then, of course a picture of the entire thing laid flat

kathy, if you had a blog, we’d all be rushing over RIGHT now to gush. but since you don’t, see comments below—i’m sure everyone will be showering kudos.
leah, is juuust about done with the scarf/doll shawl. she is “working at home” today so we expect to be able to make the pattern available for sale by tomorrow.

YES! just in time for weekend knitting. check in friday for details. i know i’m excited!
i was thinking that i might even cast on for one. since i have yet to actually own one, i think i ought to do one, y’know, for the house.

i have that original gray-blue alpaca that is intended for this shawl, and i had started it, then realized i was using too big a needle, and had to rip it back. then i realized i needed a wedding gift for the summer, and diverted the shawl-making to the ivory yarn. thus, the blue-gray never got knit! it might even be fun to knit it along with anyone else out there who is also doing it.

okay, now for today’s other special moment. some of you might remember my friend mason, who is a knitter. well mason has gotten very interested in dyeing wool. we are getting ready to explore the process, using plants from my dye garden. over the school year, we will harvest flowers for dye and cook them, mordant wool, dye wool, plan some addtions to the dye garden, and cultivate those in the spring. along the way we will explore some of the chemistry of plant dyeing and how to create variations from a single plant.

but in the meantime, mason got anxious to experiment and tried some food dyes out on a hank of laceweight alpaca. and when he was done, he gave it to me as a gift! i was thunderstruck! seriously, it made me cry . . . but of course, i cheered right up when i saw it—it is, aftter all, yarn. 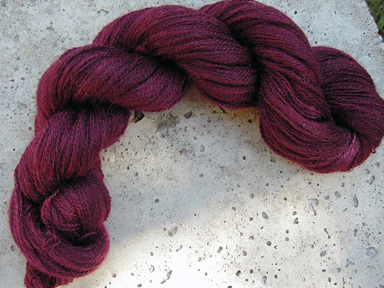 shut UP! is this not gorgeous? it’s aubergine, it’s lustrous. it’s laceweight. and so much more. when i rode home last night in the dark, i thought of things to knit with it.

he used beet and bluebery food coloring powder (along with stuff to mordant and all). it might have to shoot right to the top of my knit list. move over briar rose and fearless fibers, there’s a new kid on the block . . .

now, what could i possibly follow all that up with? none of my own knitting even comes close. i put a heel on my desk sox while i watched final files upload tuesday night.

and did a few rounds while i sat through some re-do activity wednesday. last night i did a heel on the mermaid sock, got all the way to the end of it, and was off one stictch, screwed up the mending job (those darn wraps really put a monkey wrench in my fixing skills) and had to rip out

most of that has been re-knit, but not quite all.

and that’s it! i’ll be back tomorrow with scenes of me and mason gathering dyestuff.