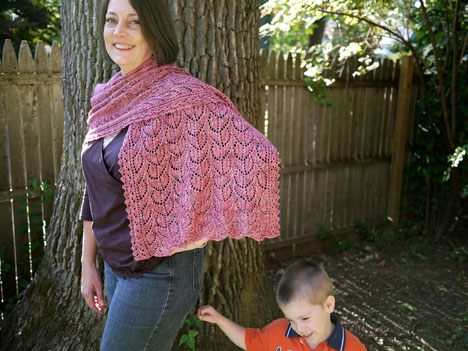 yesterday was a bright, beautiful fall day, just perfect for a photo shoot—which was good, because we got rained out on thursday. beckie, kian, and i convened early for a quick trip to the farmer’s market downtown, then headed back to my house to take some pictures, once the sun was up a little higher (even on a clear day, the mornings are markedly darker now).

more results of that session in a few days—i need to do the editing on the pictures before i’ll be ready, but we will definitely have this pattern out to later this week.

i’m afraid we overindulged at the market once again, considering how much we also have coming in from our gardens. i was looking for specific ingredients to go with the ones i had home; i wanted to make soups this weekend with some of my fall harvest. 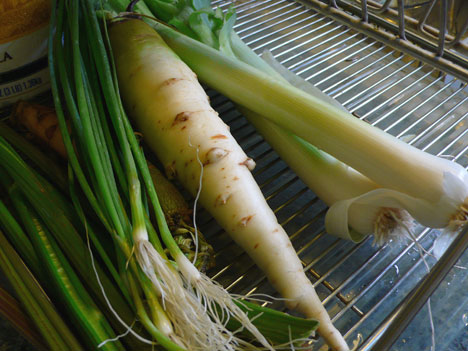 i have parsnips, parsley, celery, leeks, celeriac, scallions, peppers, and tomatoes. i bought bread, cantaloupe (for david), freshly-dug potatoes, and corn, but then beckie bought a gigantic cabbage, so i took half to help her out (thanks beckie!). i’ve never made cabbage soup, but have been wanting to try it, so this was a good opportunity.

but of course, it meant i’d be in the kitchen all of saturday afternoon. no matter; i like cooking and with a book to listen to while i work, it’s really relaxing and nice to be away from the computer for a while.

first, i got some tomatoes in the oven to prepare a batch of paste for the freezer

this is the second big batch this week and i think i probably have enough now for winter; i’ll have to think of something else to do with tomatoes from now on. i still haven’t tried the ketchup, but i think that might be next; all the cooking it requires is a good way to compact the tomatoes so they take up less space. 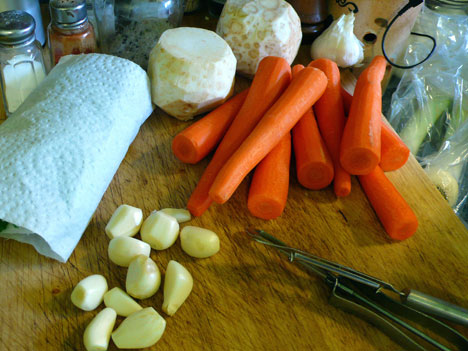 next i prepped for the potato soup—i just used a basic recipe from a friend, adding in the celeriac, leeks, and celery to initial sauté. once the potatoes had cooked through, i pureed it, then added a scant amount of cream, scallions, fresh corn, and some grated carrot for color and texture. 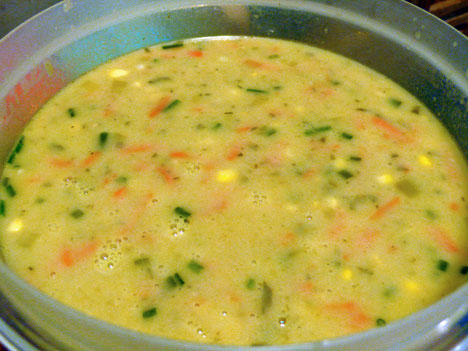 YUM. we had it for dinner with cheese melts; it was really good.

the cabbage soup had a similar list of ingredients, plus a few more—tomatoes, cabbage, parsnips, barley, vinegar. it’s amazing how changing just a few things in a soup makes it a whole different dish. i’m glad i finally made this—it’s delicious in a whole different way from the other soup and i think it made about three gallons, haha. we have plenty put away in the freezer for a while . . . 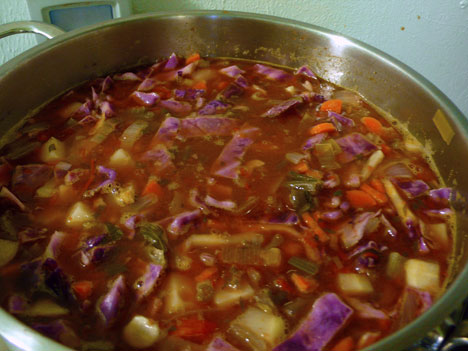 now that the evenings are chilly, it’s good to be eating soup again. besides tasting great and being good company for bread, it’s full of vitamins and minerals and so easy to heat up for a quick supper. making it now when all the ingredients are so fresh, is another good way to capture and preserve the fullest flavor of the vegetables.

i never did get to make that other batch of stuffed peppers i planned, but maybe this evening; it’s supposed to rain later, so it might be a good time to do it.

i have to confess, i have little knitting i can show you today—i’m working on two secret projects and that leaves just my writ warmers to share. one is done now 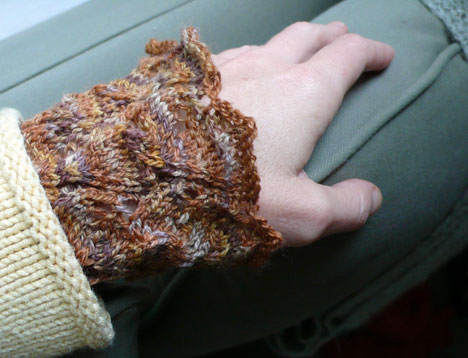 but not even blocked yet; i should have the other one done very soon and once it is, i’ll soak them both together. i think the lace portion of these should actually be a little shorter; that would make them seem a little fuller without adding to the actual diameter (which seems big enough).

i spent a lot of time swatching this week to get started on one of the secret projects, so that of course took a bit away form actual project knitting. but that’s on the needles now and will probably travel with me on my next couple of trips, to knit on while i relax at night. 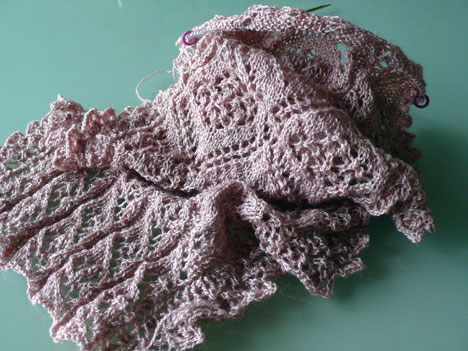 i also worked on this big swatch i’ve been knitting and reknitting all summer. and finally, finally, it’s all worked out. i’ll finish it tonight and block it so we can talk about it next time. it’s a plan for a bigger lace project i thought i’d have on the needles long before now, but sometimes, project just need that gestation time and there’s nothing i can do to push it. i have to say though, i’m glad it’s finally pulled together; i’m tired of this swatch, haha.

i also played around with some ideas for my coat; i think i’ve settled on what yarn i should use (an oldie, but goodie, from my personal stash), but i’m not at all certain what shape it should be or what fabric and texture i’d like. i’m pondering . . .