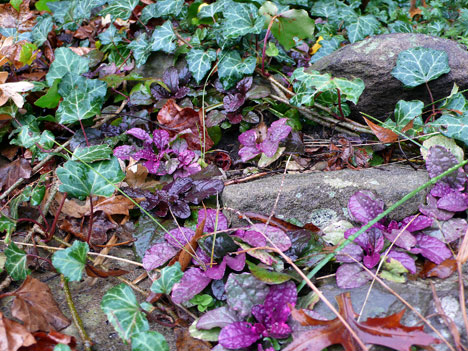 intake from the garden is beginning to wane as the days grow considerably colder (the temperature hasn’t been higher than 60 degrees since i got back from miami and at night—brrrr!). the gray season is upon us, i think. 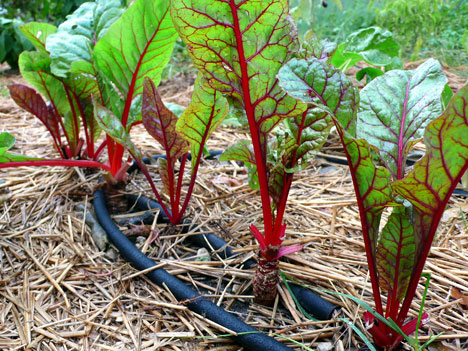 we still have root vegetables out there to pull and greens (they actually like this weather) and some tomatoes, but for the most part, it’s slow. i let the basil go to flower because i like the way they bring some color to the yard. 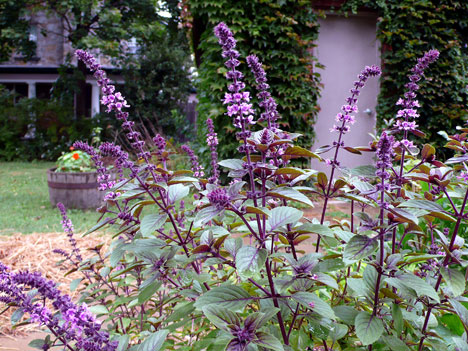 it will always remind me of the time period a few years back, when i knit the highlander sweater, in briar rose yarn that was dyed all in these green and plum colors. 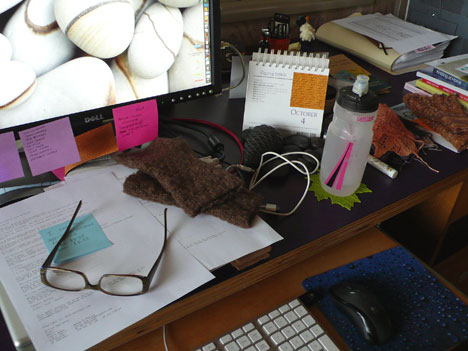 a weekend of very dreary weather (which continues today), kept me indoors to do bookkeeping, work on patterns (leaving my desk in complete disarray today), and putter in the kitchen on saturday, putting up some of the last tomatoes and greens. in the evening, we celebrated david and beckie’s birthday 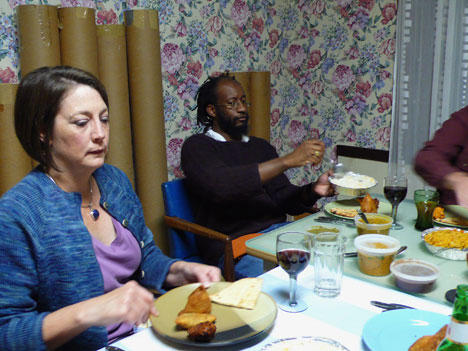 (we really were having fun, despite the seriousness of the BD people here!)
their birthday is a good excuse for our group of friends to gather for an end of summer recap and dinner—once the weather cools and it gets dark early, we can all leave our gardening and canning for a bit to relax. 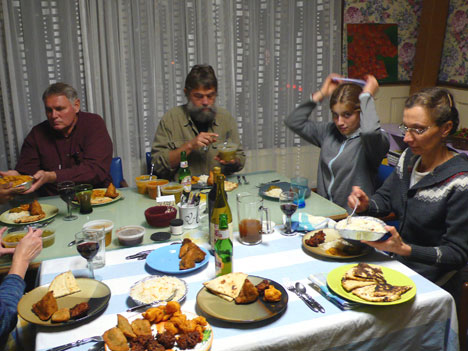 we ordered in from our favorite indian restaurant and ate very well. then we had the cake—mmmm.

beckie’s gift was one of last week’s secret projects, a shawlette that i knit up in that woolen rabbit bambino yarn i talked about the other day. the color looks amazing on her—a beautiful browney-pink named woodrose.

unfortunately, all the photos i snapped of her wearing it came out badly and friends don’t let friends look bad on blogs, right?

yesterday i hit the grindstone hard to get some more pattern work done and finished another secret project, so i don’t have much new knitting to show.

but i did start a new pair of socks for david 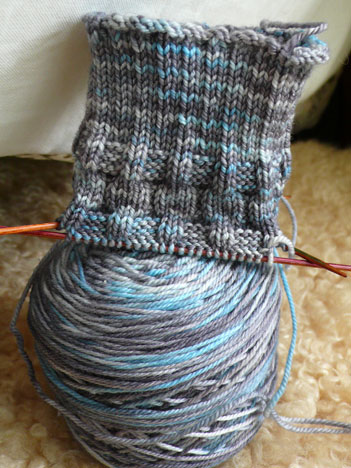 this is a delicious merino/cashmere/nylon sock blend from tanis fiber arts, the plump and soft purple label cashmere yarn. i just adore the colorway—shadow—with its gray clouds and turquoise sky colors. it’s subtle enough to marry well with a manly stitch pattern, but pretty, too (and david likes pretty).

the fabric is knitting up cushy with great stitch definition; i’m pretty sure this pair will be a hit. i’m still planning the gansey sock too, but didn’t have time to sit down and chart it out over the weekend—hopefully, that will go on the needles in the next couple of days.

speaking of great yarn, i have a few things i want to show you that arrived on a good mail day last friday (isn’t it great when friday brings good mail?).

one envelope arrived jammed with samples from the new dirty water dyeworks, brainchild of stephanie, who formerly worked under the dye dreams label (you’ve seen a lot of her yarn on the blog before under that name). she has a ravelry group too, where you can find out where she will be selling her yarns.

above you can see her bertha merino/cashmere/nylon yarn in colorways yogi bear (left) and pixie (right). and below, we have paula (100% BFL sock), in colorway storm 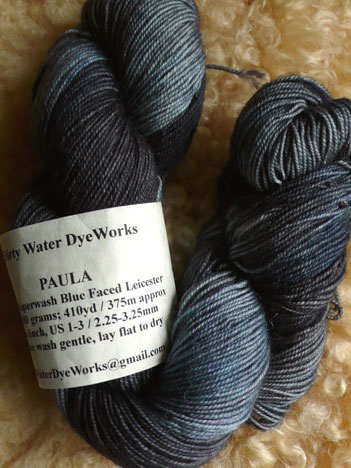 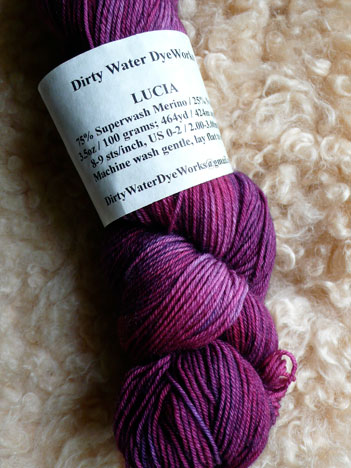 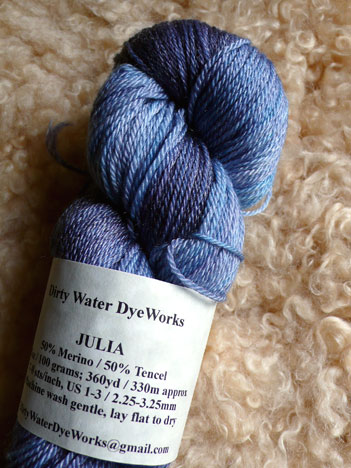 i always thought that stephanie’s merino/tencel was some of the softest and lovliest to knit with; i enjoyed knitting my hoarfrost neckwarmer from a similar colorway.

in the same mailing, i got another package from our friend erica at kollage yarns, who seemingly never tires of sending us yarn to look at (and we never tire of indulging her, do we?) 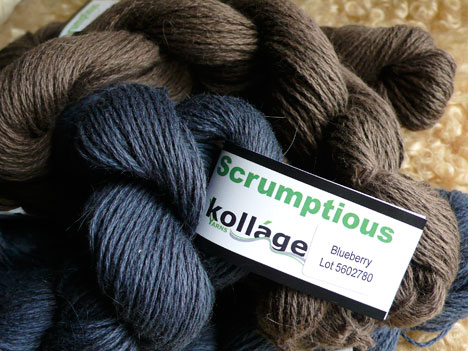 a beautiful batch of their aptly-named scrumptious yarn, a gorgeous angora/merino blend. i expected to see a fuzzier yarn after erica described it to me, but i was pleasantly surprised by its nearly-smooth, chain plied texture—it’s a lot like the bison and yak yarns i’ve knit with. these colors are so sophisticated, too; this would be a beautiful choice for a luxurious man’s scarf.

oh sigh, i had planned to get this post up much earlier, but it has been a monday full of distractions and fires to put out. now it’s almost dark already! i need to get busy on some photos because i have a pattern all set to release tomorrow—something seasonal that might make it onto the christmas knitting list. 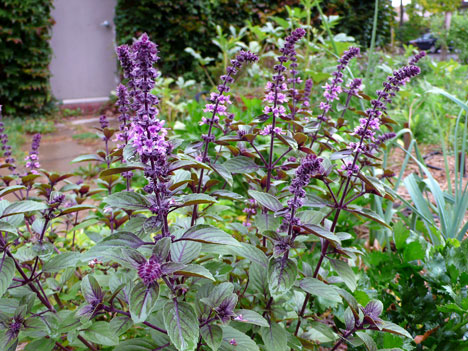