this DOES have to do with knitting—please read through!

who doesn’t love the underdog? i think most knitters, (and most people) have a soft spot for the guy who brings up the rear in any race. according to james raia, of raia communications:

Nothing demonstrates this more than the tradition of the lanterne rouge or red lantern. It’s the honor given to the rider who finishes in last place in the overall Tour de France standings.

Named after the red lantern on the caboose of a train, the lanterne rouge honor began in the first Tour de France in 1903. It’s never been an official designation, but the last-place cyclist receives his share of admiration.
In recent years, Tour organizers have discouraged any publicity about the red lantern because riders fervently began to abuse its original intention.

Since the second-to-last rider in the final standings’ wouldn’t earn anything for his status, back-of-the-back riders took crafty measures to finish last. They’d hide behind buildings, coast along routes or feign injury in order to be last. The last rider doesn’t receive prize money for his finish, either. But in yesteryear, it was common for lanterne rouge honorees to receive sizable appearance fees to compete in post-Tour appearance criteriums, the fast-paced races on short, enclosed courses throughout Europe.

“It adds nothing,” Jean Marie Leblanc, the retiring Tour de France race director said of the red lantern designation. “Today it is part of the lore of the Tour de France, but it no longer exists officially or unofficially.”

Yet the red lantern is still a revered Tour accomplishment.

so i am thinking, since hurrricane vanessa took us all by surprise, knitting a moth shawl RAMP up and right over the top of us last week, we should have some fun with the remaining contestants and prizes.

no fault of vanessa’s, but such a fast and unexpected finish kinda took the wind out of our sails. i think the rest of us have been foundering around for a reason to knit faster these last few days. and there is SO much more fun to be had!

so my proposal is—let’s knit slower*!
you can bet now on who will finish last. after all, julia says she WANTS us all finish before her. and carole is staunchly sticking to her claim for last place. sounds like a competition to me . . .

here’s what you should do: leave a comment at the end of this post as to which one of the remaining racers is your bet for last place: cheryl, carole, beth,erin, daphne, or liz.

let’s say that all votes must be in by friday, september 1st. if one of the racers finishes before then, of course, they are not in the running any more. i know you knew that, just sayin’ . . .

all the people who vote for la tricoteuse lanterne rouge—the last remaining knitter—will be entered into a blind drawing for several beautiful prizes, including:

enough grandma’s blessing yarn from Briar Rose to knit a moth wing shawl (and probably a pair of socks too!)

fonty kidapole, in this mysterious, elusive gray, from rebecca, a reader who just wanted to be part of the fun!

a hank of laceweight mohair fresh from my dye pot. well—ok, i’ll dry it before i send it to the winner. 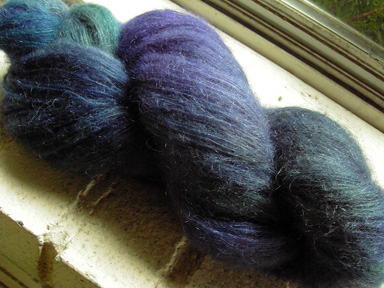 each prize will be accompanied by a knitspot pattern of the winner’s choice!