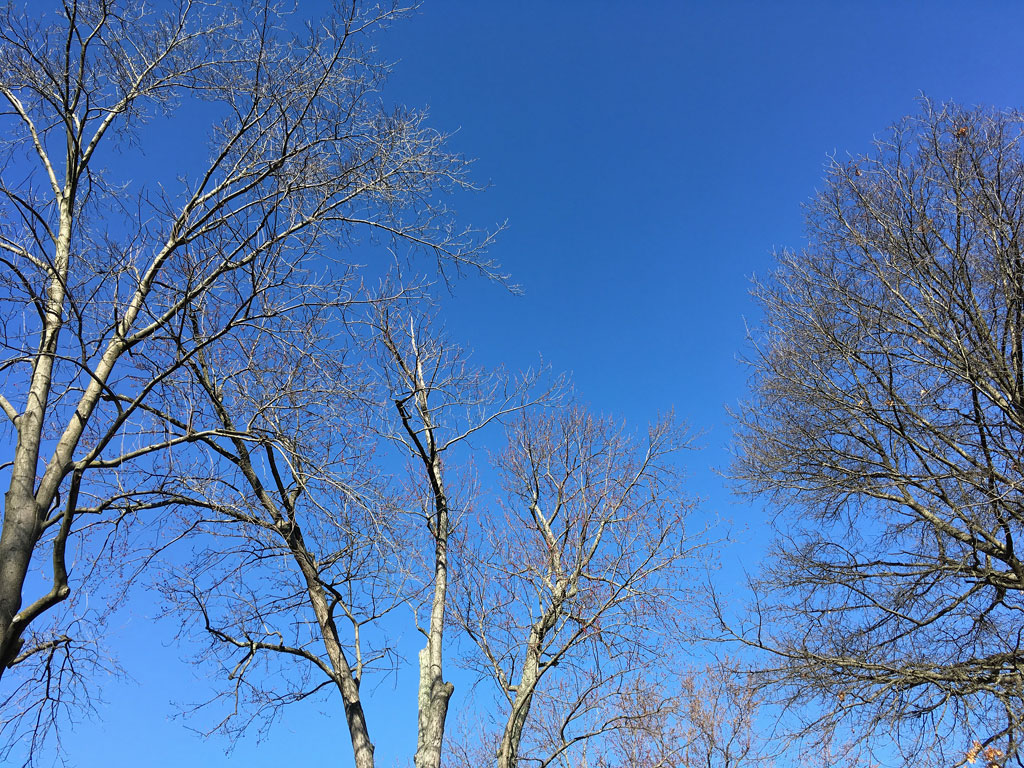 oh these little breaks that tell us spring is planning to come for a stay! we had the most beautiful skies this past weekend—blue, blue and clear. we don’t get many of these during any season in ohio, so a short string of them feels like a big treat. the temperatures are still low, but it was excellent water for long walks and we took advantage of it. 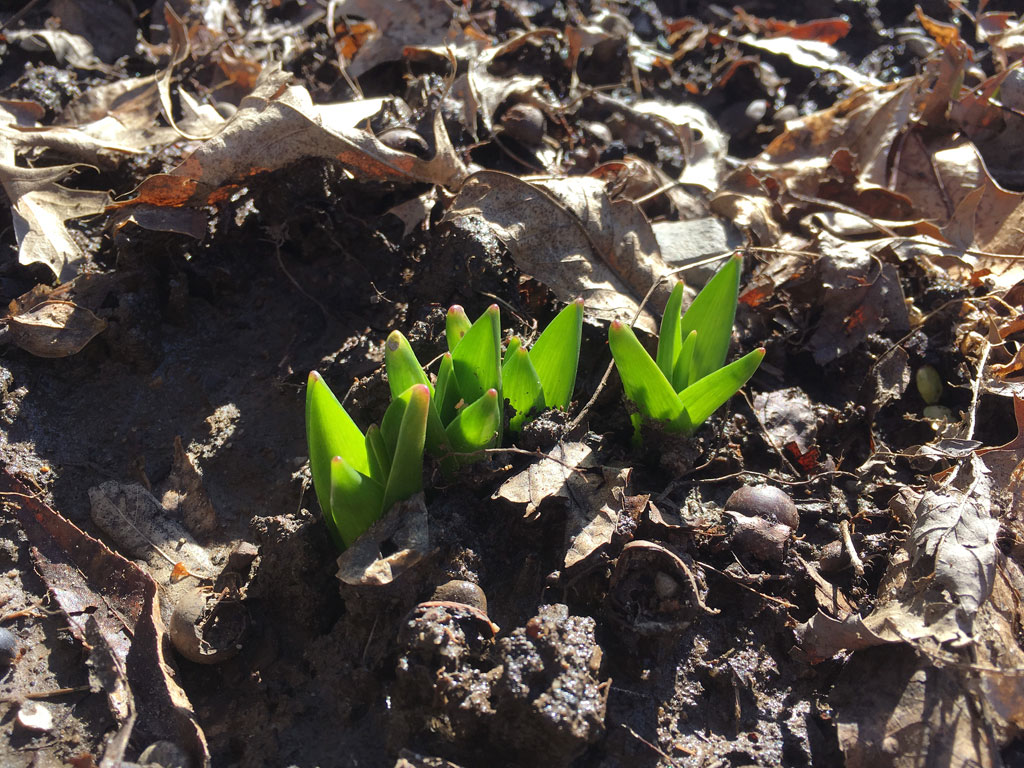 back lit tips of emerging bulbs are glowing (hyacinth, i think? if not, then tulips). 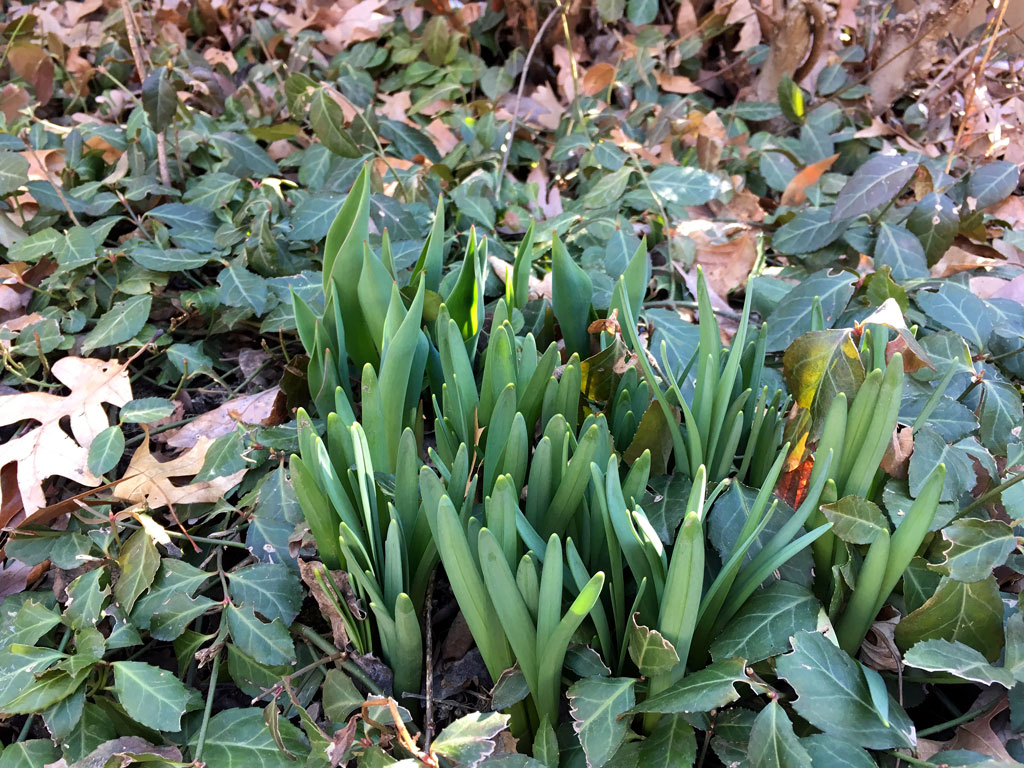 and then there’s today—nature trying furiously to make a blizzard and throwing one last winter tantrum to do it.

we just have to ignore these kinds of days and think about blue skies. fortunately we have knitting to curl up with and if we’re lucky, a warm cuddly doggie. 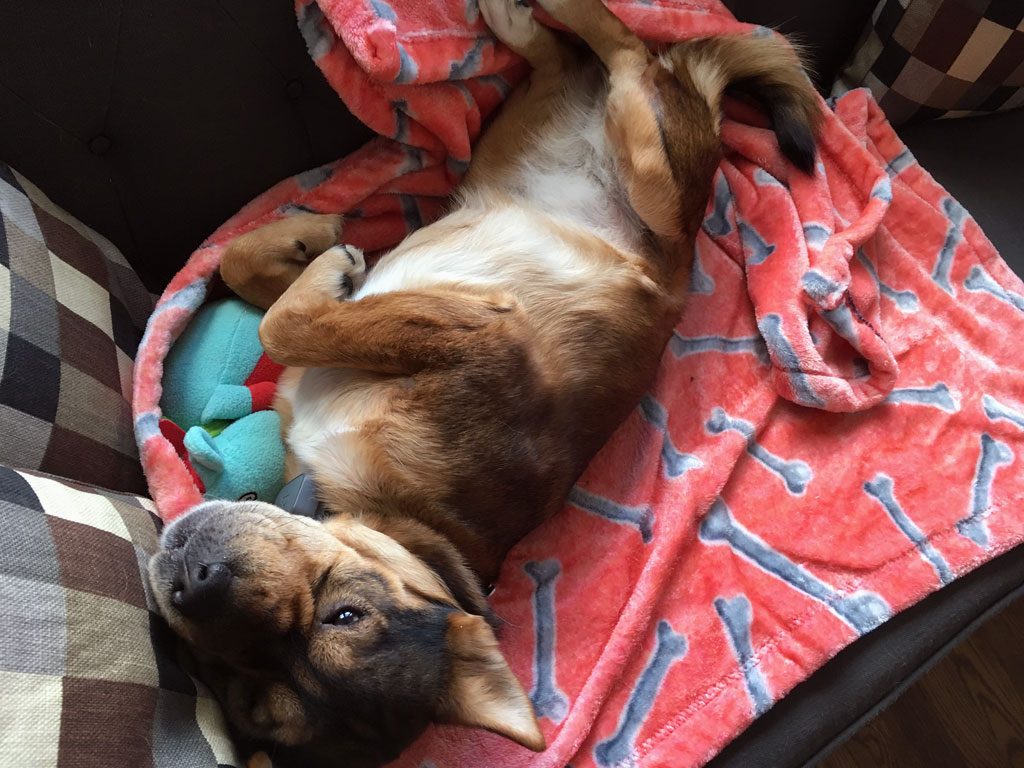 for all who have asked, we are so warmed by your kind, thoughtful wishes—cardigan got her fixator out at the end of january with a bit more mending to do, but has progressed remarkably well. i have an update planned for the next blog, maybe even cajoling her to write along with me. 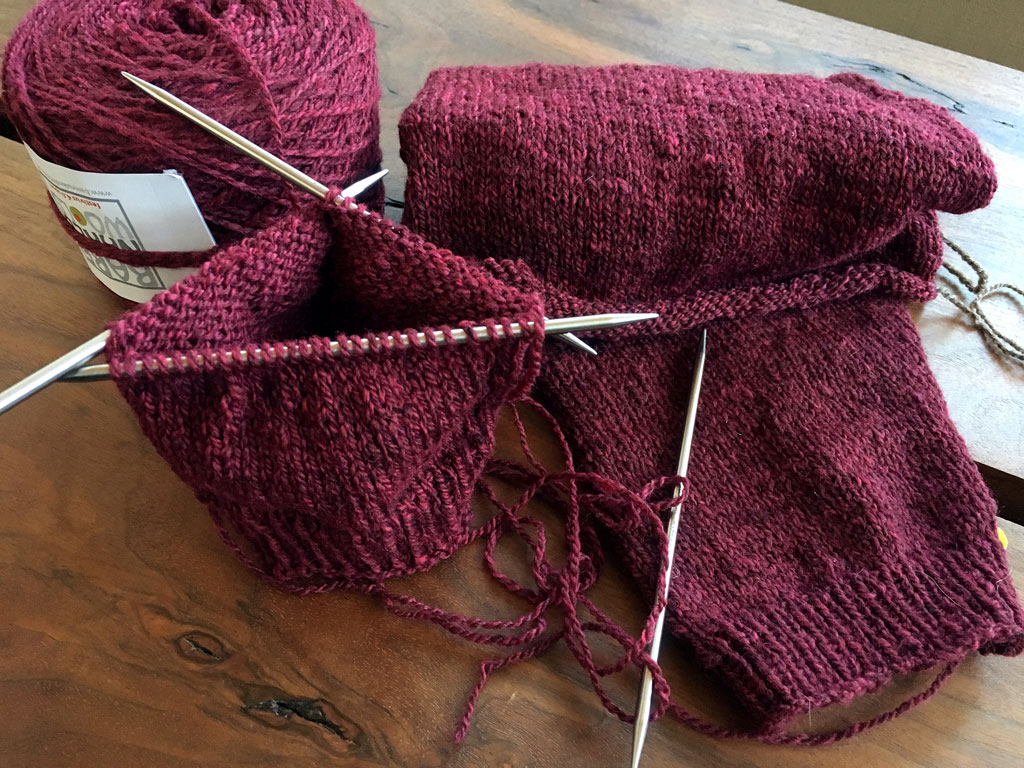 back in december i started a sweater for david, a very simple design tailored to his specifications. i think i had the sleeves nearly complete when i last wrote a post (i know; i’ve been horribly negligent, ugh), but much progress was made after that point. 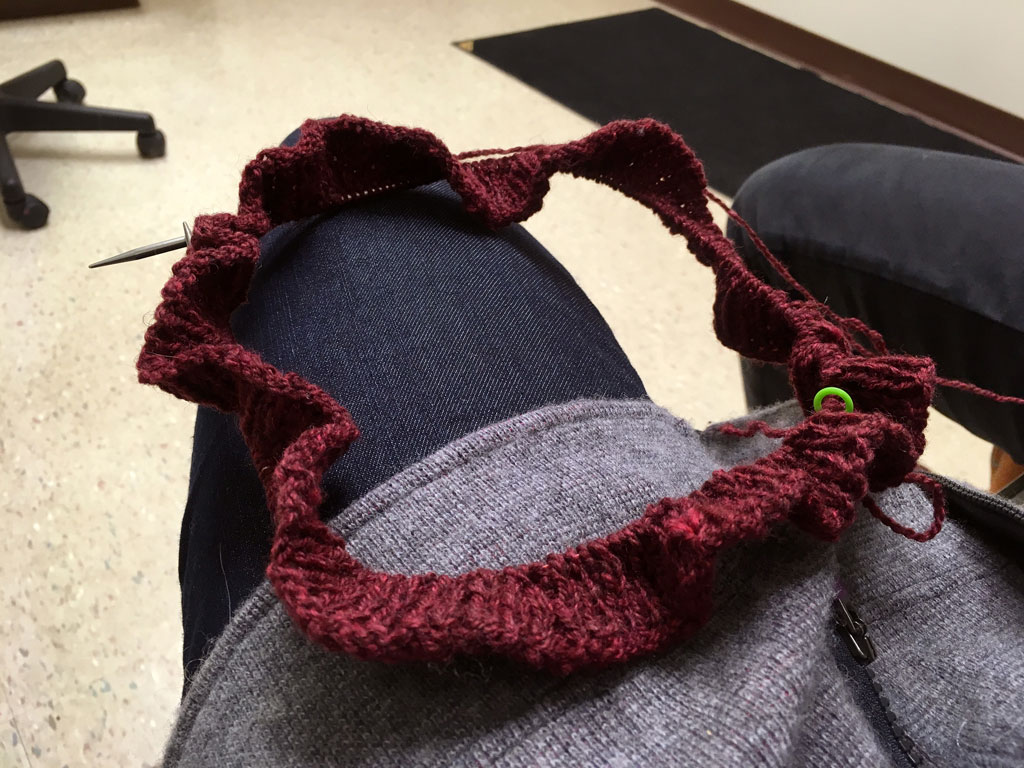 the day we went in for cardigan’s x-ray and surgery to remove her fixator, i cast on the for sweater body in the waiting room and worked on the hem ribbing. we had quite a wait so i was able to complete all of that by the time the doctor came out with an update. 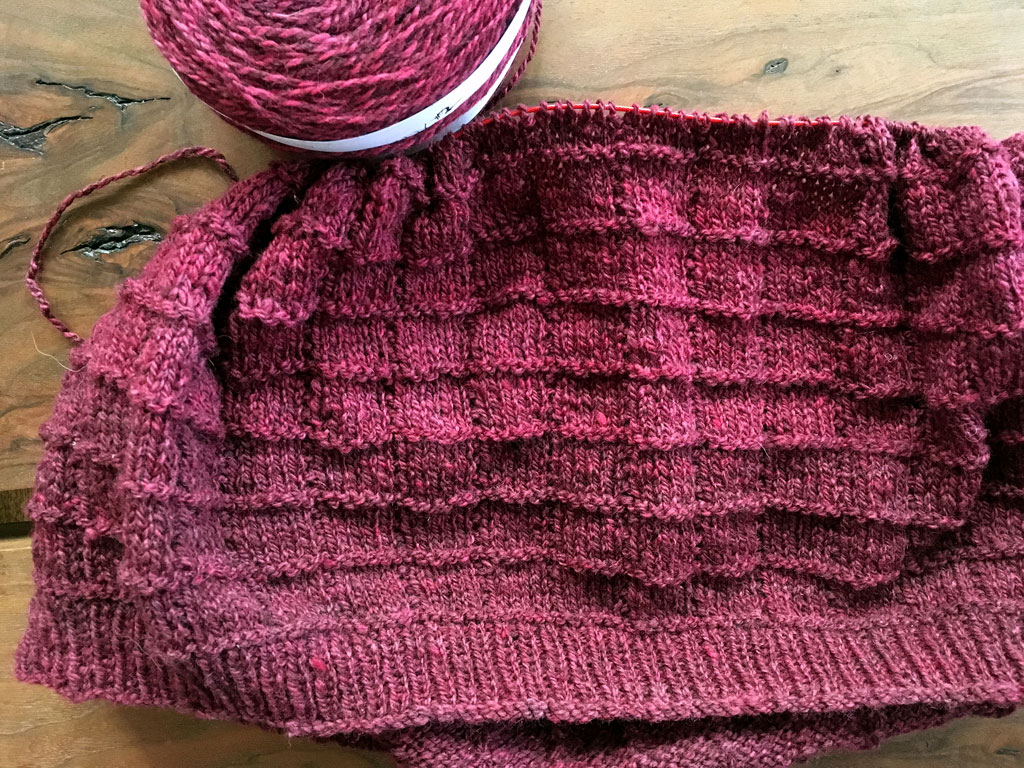 afterward though, it appears that the knitting on this moved forward at a turtle’s pace, because i had only completed a few repeats of the body pattern by the time the olympics began.

i did take a timeout to complete some terrifically fun colorwork projects for our february pairings club installment. i love knitting colorwork and i kind of fell down a rabbit hole with these, knitting more samples than i really needed. in fact, i still have one till cowl on the needles and another one planned. 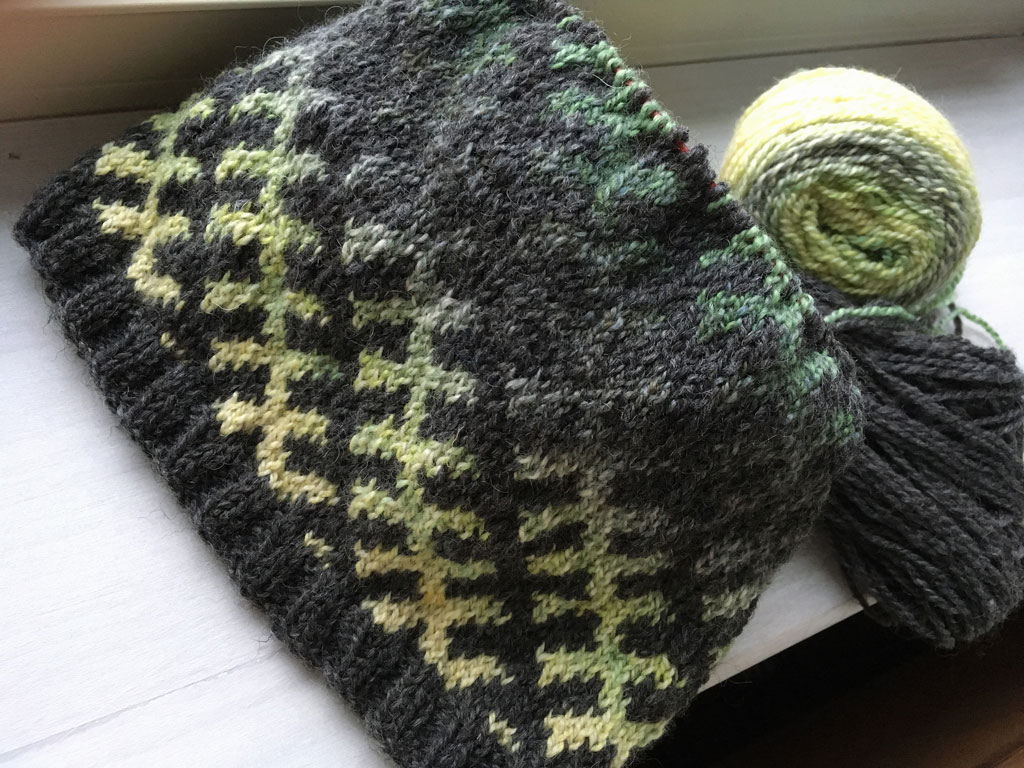 i just can’t get enough of this project—the yarn, the pattern (super easy to memorize), and the speed with which it can be knit are all enticing. it made me want to pair the gradient colorway with several different shades of kent DK, some subtle and some more contrast-y. so fun! i do like the tide pool shade best with the feederbrook entropy yarn (custom dyed in the sweet corn colorway for our club), but the rest are close runners up for  me and here i have it paired with mussel shell for maximum contrast. 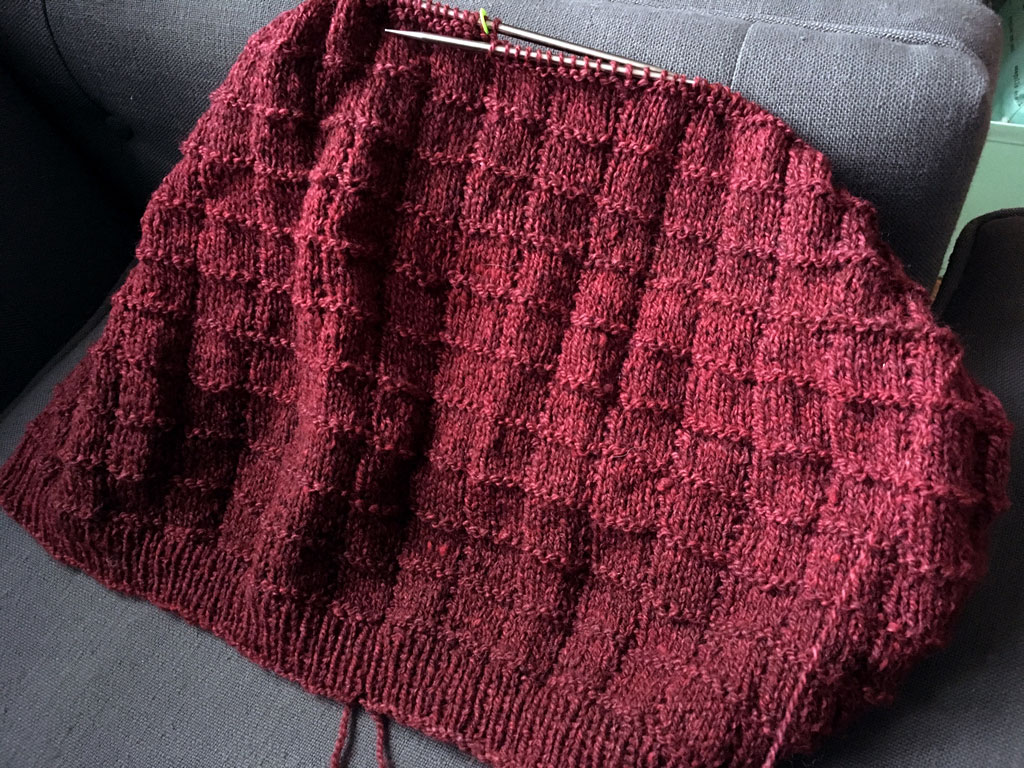 anyway, by the time i took a bit of a breather, the olympics were about to begin and ellen started a KAL in our rav group. i was ready to switch gears and knit something simple and soothing—binging on colorwork in DK weight yarn was making my hands a little sore. 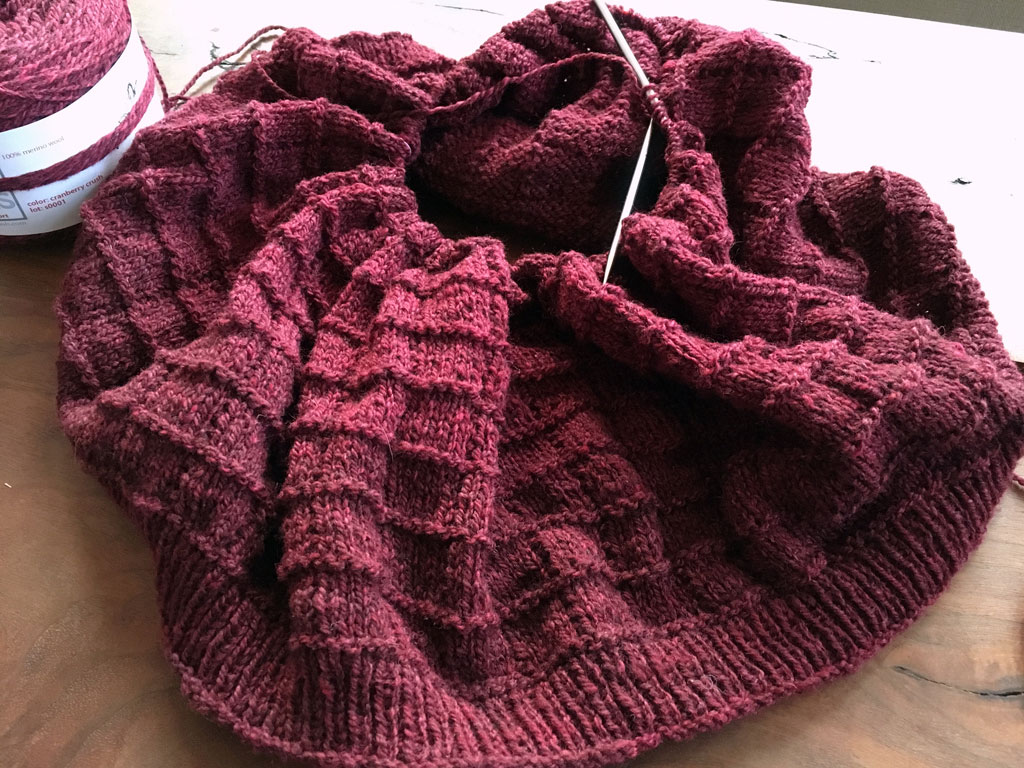 i didn’t reach far to pick a project—for me it was getting ahead on the red sweater and with any luck, finishing it (because my original goal was to complete it by valentine’s day but that would be a real stretch). no worries about sore hands here—this yarn couldn’t be cushier; it’s so soft and easy on my hands, yum. and the design is partly mindless; an intuitive knit/purl pattern for the body, egging me on to finish another eight row repeat. it really goes fast! 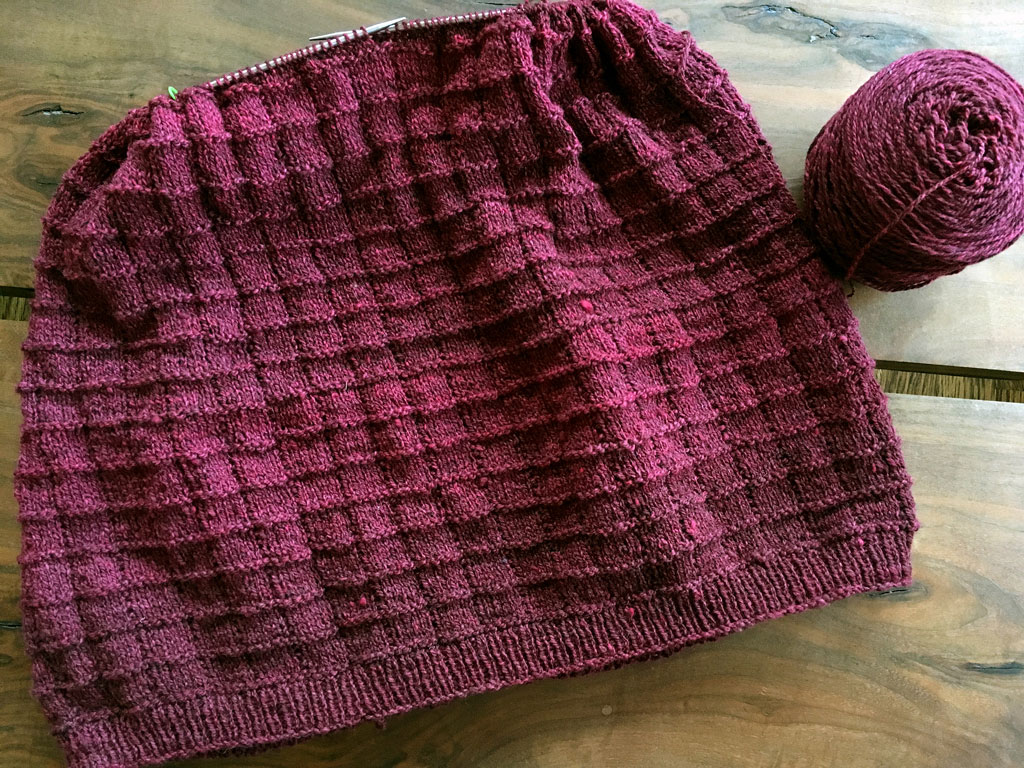 the olympic KAL (officially known as the ravellenics) must’ve been just the kick in the pants i needed. suddenly i was making grand progress. there were snowy days when i’d make huge leaps in the length of the body, sometime neglecting other duties. but a guy sweater really demands a certain commitment, being at least one-third larger than the size i’m used to knitting for myself, hehe.

another thing that kept me knitting steadily was watching the gradual color changes in the fabric—they are so subtle and ethereal, more like washes than stripes or banding. you almost can’t see them most of the time in the skeins that david chose. of course there ARE skeins with more contrast and activity, but he’s attracted to quieter patterns. 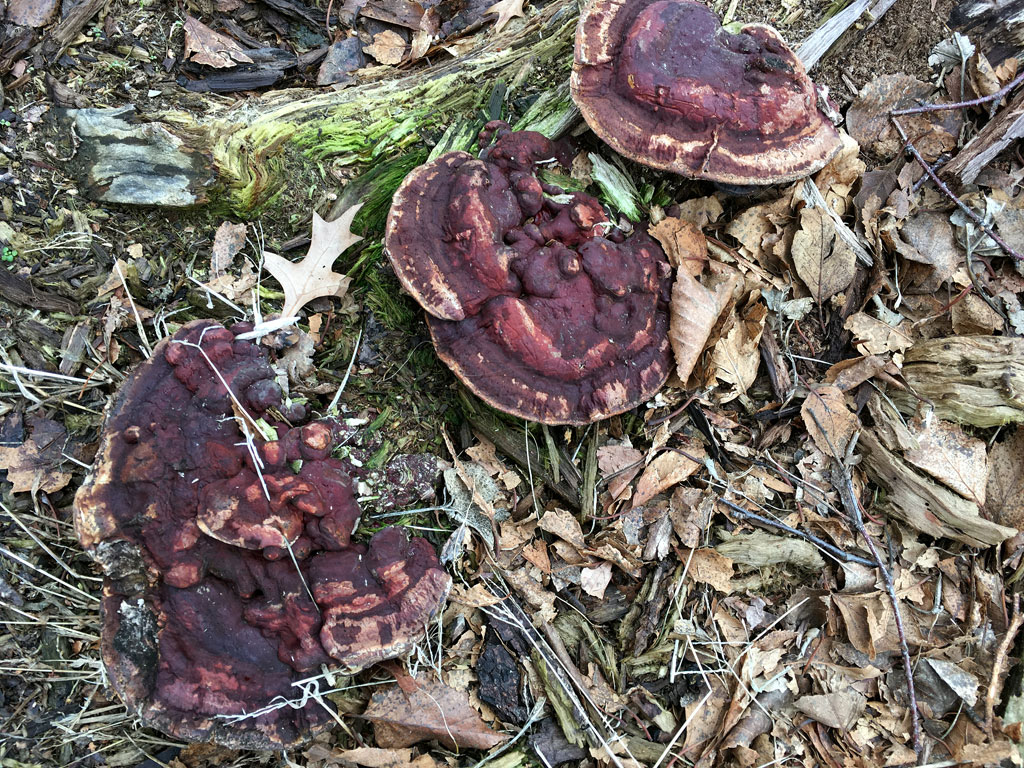 and look what cardigan and i found on valentine’s day, right in the middle of sweater construction—the perfect natural expression of what i was knitting! she wasn’t as excited about our find as i was, but she pretended to be, sniffing deeply when i pointed them out.

i’m kind of kicking myself because i can’t remember exactly where we saw these and now i’m wondering if they would produce a nice dye. i think i know where to look for them again; i’ll let you know i find them. 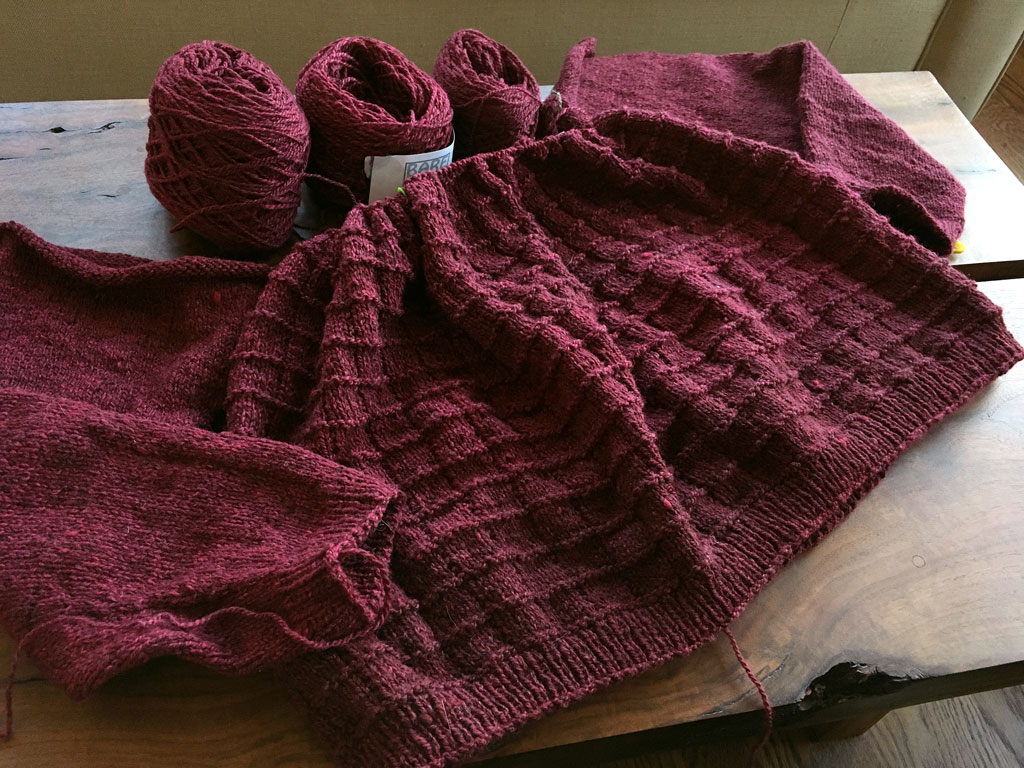 cardigan was still mending some last fractures that showed up in her jaw x-ray and waiting for the swelling to go down, so between excursions out of doors, she slept a lot and enjoyed having me nearby, knitting and listening to books. within the first week of the olympics, i had the body knit to the underarms and was able to take some photos with the sleeves arranged next to it. 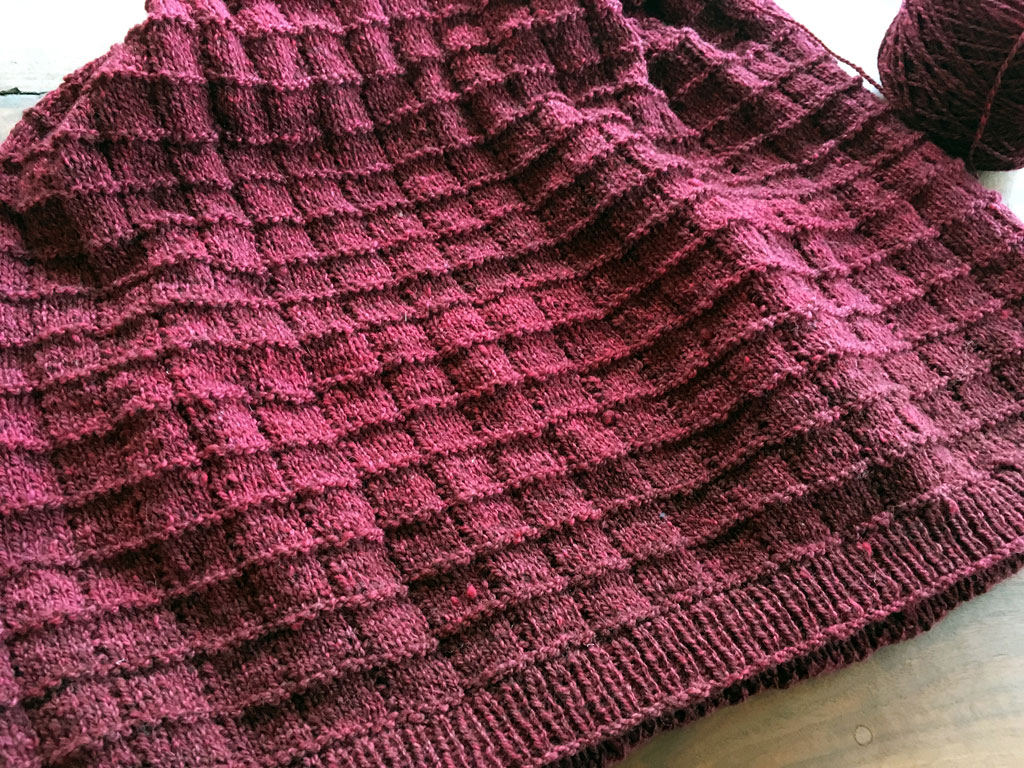 this was my first chance to see how my color shading was working out; i wanted to make sure that when i got to the sleeve/body join, i would be knitting with yarn that was approximately the same shading all around. i’d left the yarn attached to each sleeve so i could decide later which ball would join the sweater pieces. 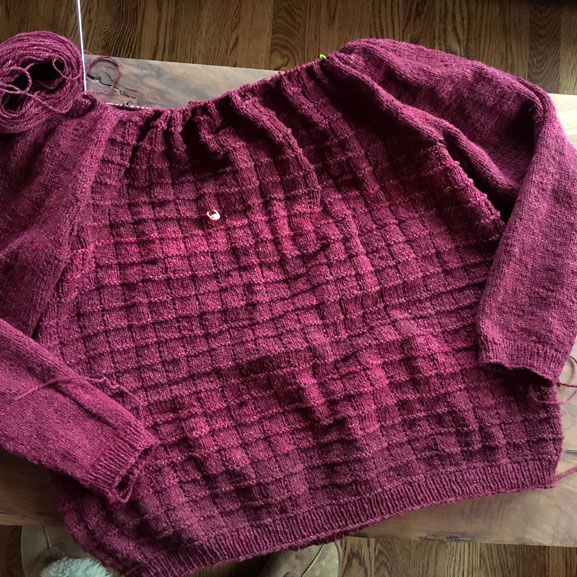 finally it was long enough to join—but that’s when the real challenge begins because the rounds were SO long—around 400 stitches at the start of the underarm. i remember that i started the yoke during a wednesday knit night at the shop. suddenly progress slowed to a snail’s pace and at the same time, i had to take care of some other work that i’d been procrastinating on. by the next tuesday, i was only a few inches past the underarm with only five days to go til the end of the olympics.

but my deadline had been met, so my knitting time was freed up to finish. 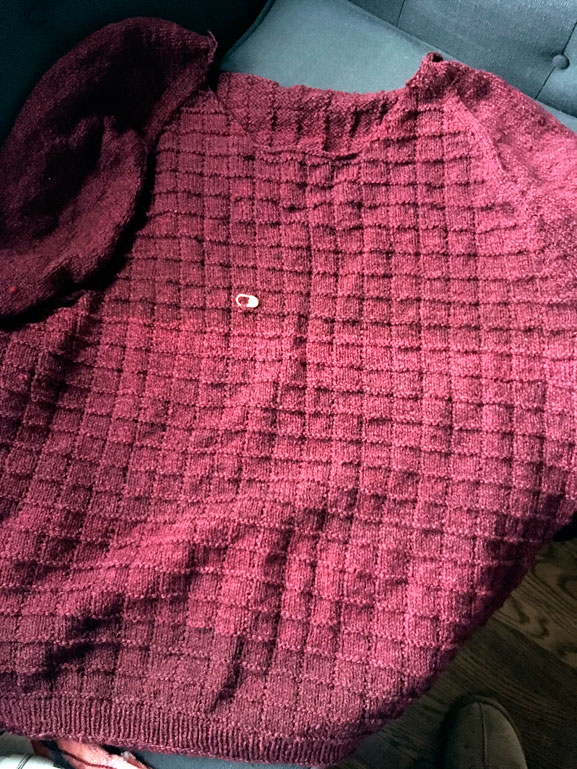 by saturday night, the yoke was complete and i grabbed a quick photo of the finished body on sunday morning, once i had some light. i still had to knit the neckband though and got busy right away. 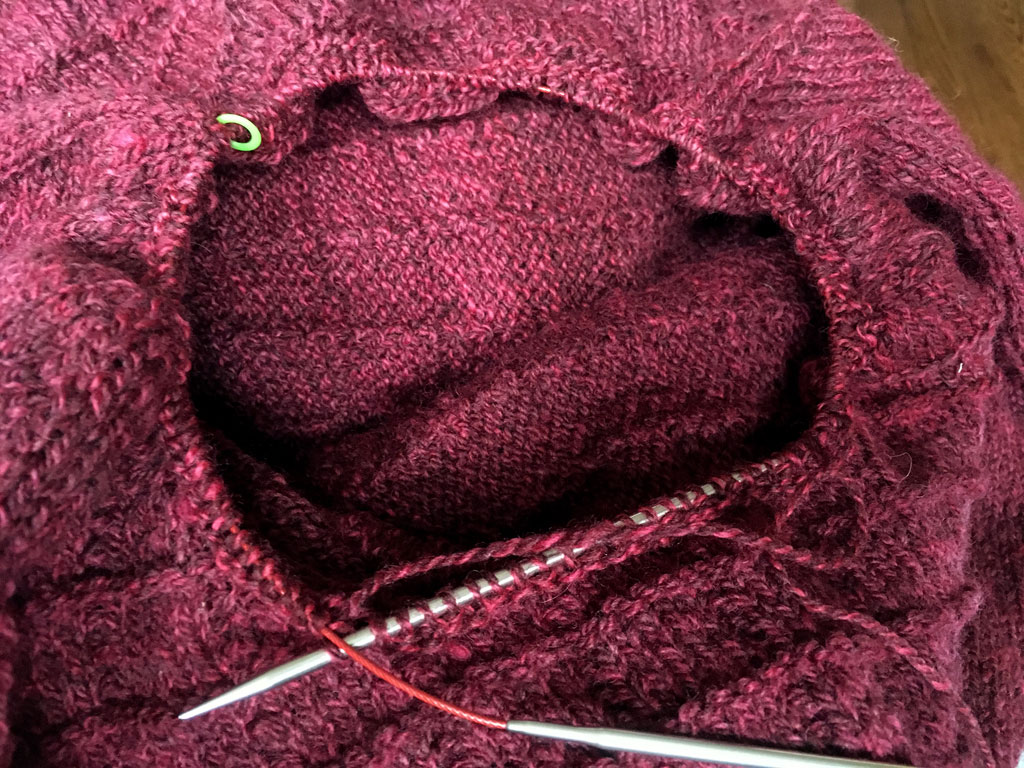 this is always such a nail biter for me; while i can make pretty good estimates about how many sts to pick up, i never know until the band is complete and off the needles whether it’s just the right fit—and so much depends on it being correct. the band is the final and most visible finishing detail; if it’s loose and crinkly, it won’t just look bad, it won’t maintain a nice tension around the neck either and the sweater could slip around. the added structure of a firm-fitting neckband is especially important on a seamless raglan like this one. but if it’s too tight, it will pinch the fabric unattractively and possibly not fit over the head.

it’s not uncommon at all for me to reknit bands—even a couple of times if i’m not happy. but man bands? the thought of it exhausted me. 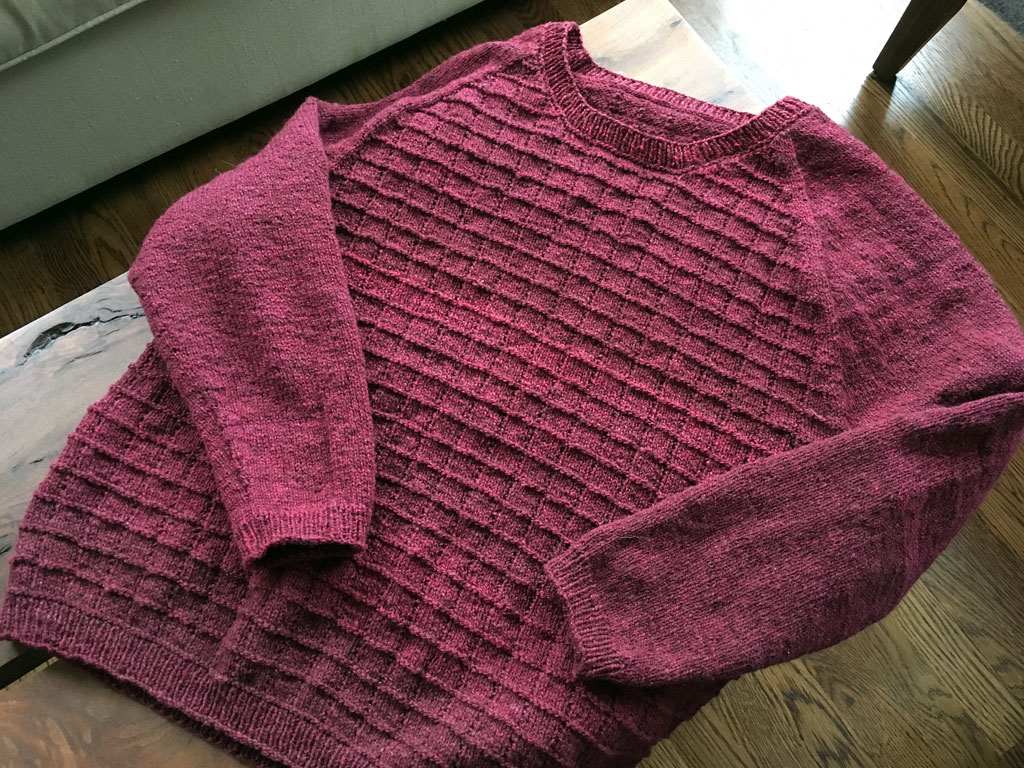 fortunately, i got lucky and the band worked out perfectly and i had a finished sweater by early afternoon on sunday. AND david says he likes it (i know that might mean he doesn’t really like it, but i prefer to live under the illusion that it’s true). he tried it on and it fits really well. we washed it and it barely changed size, growing just a little in length; similar to the results with my swatches. he hasn’t worn it yet, but i’m hoping i’ll see it on him soon.

i think he’s afraid i’ll stalk hime with the camera if he puts it on, haha.

david’s red version is really a prototype for a final design that will be slightly different—he wanted his sweater completely free of details, but i like the idea of a narrow cable defining the body and raglan lines. 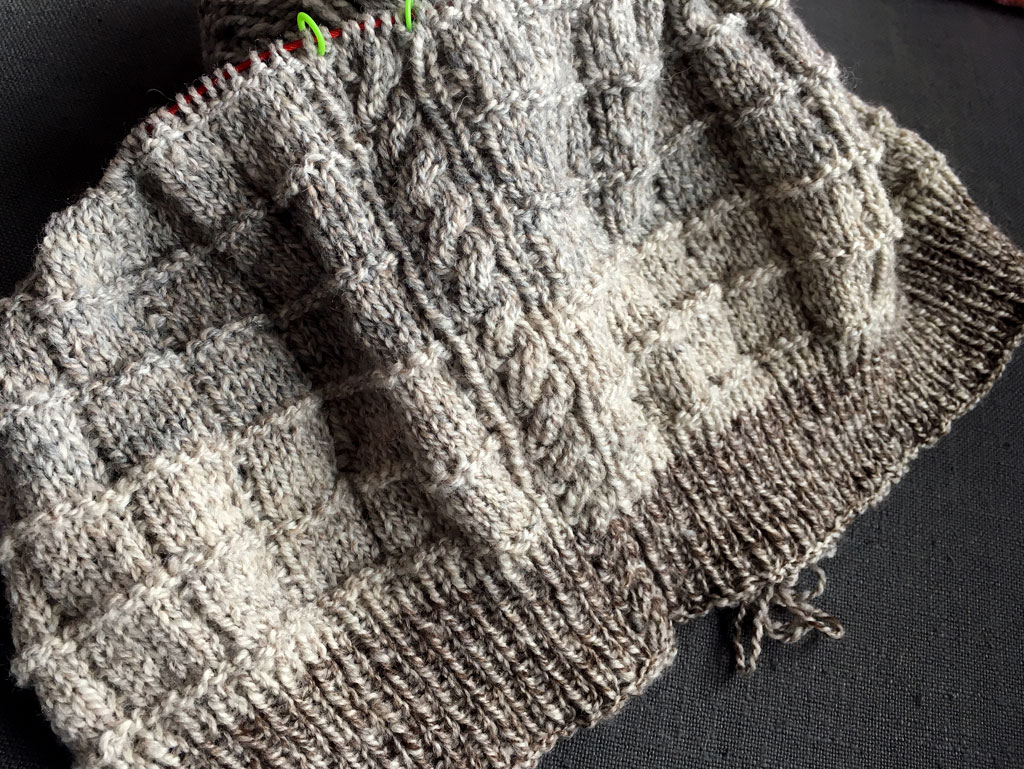 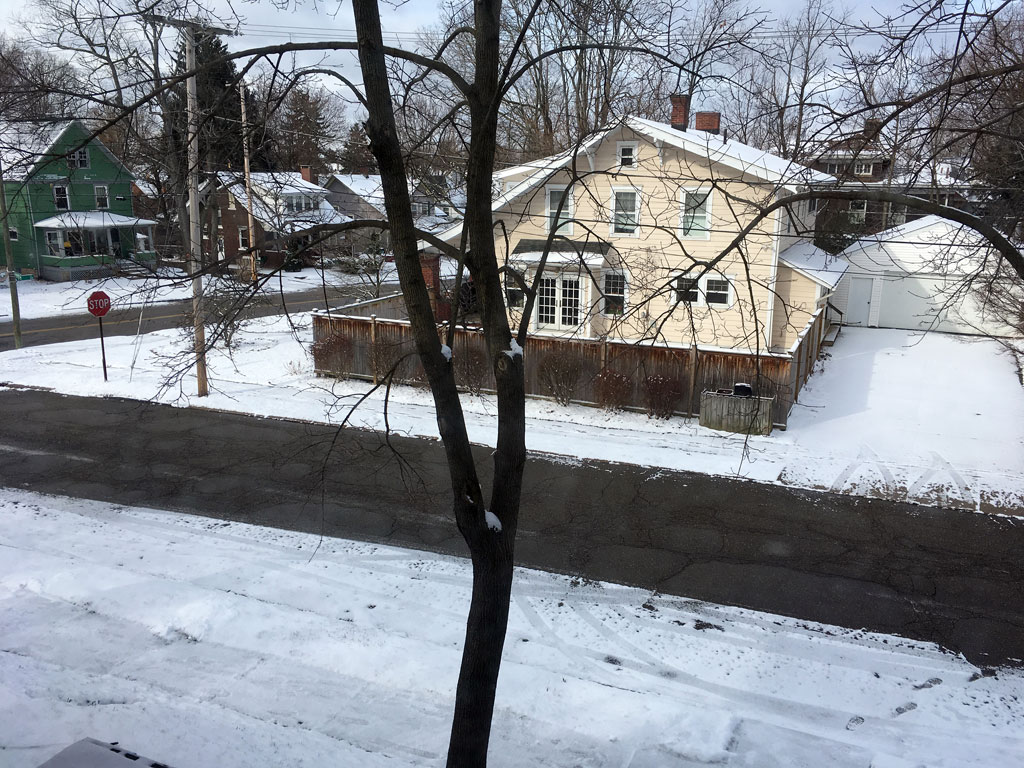 well, the skies have brightened a bit but the snow is still drifting down and it’s windy and COLD—just 24 degrees, brr. i’m not sure spring is in the air just yet (but just a few days to go before it’s supposed to show up so . . .).

i have to stop writing now, because cardigan and i have an adventure planned. we’ve been working with a trainer a bit and today we are going to his place to meet his dogs and do some socializing. it’s been quite a while since she had an outing with other dogs and i think it’ll be a lot of fun; we’ll be back in a couple of days to share all of her latest news.