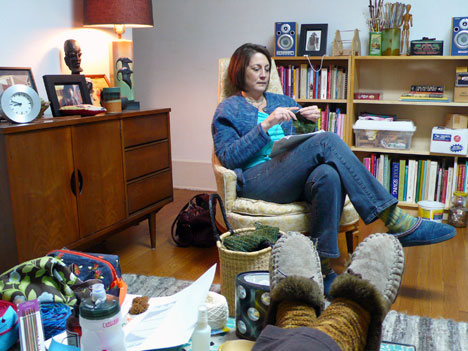 beckie and i started our weekend off right, with an evening of knitting and lounging about in our slippers and stretchy pants. it was great.

beckie’s been working on her jackie leisure jacket in briar rose fourth of july and finished the second front piece that evening. 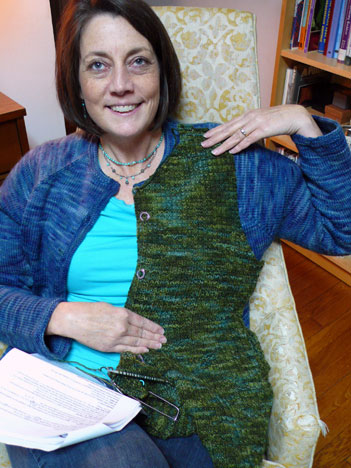 it’s beautiful—i am engulfed in yarn envy over that colorway, a beautiful green/gold mix with turquoise highlights, which chris custom dyed for beckie. i am such a yarn ho.

(that reminds me—there is a hilarious yarn ho thread running in the knitspot ravelry group. i haven’t had such a fun read in a long time; i laugh out loud every time i check in. you should check it out—and by all means, add your own 2¢; you don’t have to be a member to be a yarn ho, hee-hee!)

i worked on the sweater i’m knitting for my nephew amad. i got the left front done and it was looking kind of skimpy, considering the height that i think he is (i’ve only seen pictures this year, but he looks tall). so i started the right front and planned to add an inch in length and a few stitches across. not too much bigger . . . just enough so that he can wear it for a couple of years. 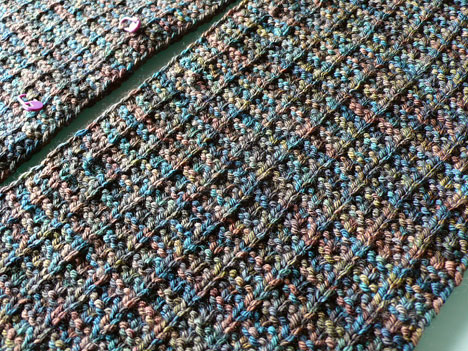 mmm, the fabric is yummy; perfect for the little man. i just know he’ll like this jacket. and it’s going so fast, i’m considering a matching one for his baby brother. i think they’d love that. and i certainly have enough yarn . . .

while we knit and chatted, we also watched the porch railings go up right outside the study windows. david is a late riser and likes to work at night. with the shortening days, he’s devised a system of outdoor floods for the porches, so his area looks like a lit-up stage. he cracks me up . . . but not enough to tell him to stop. 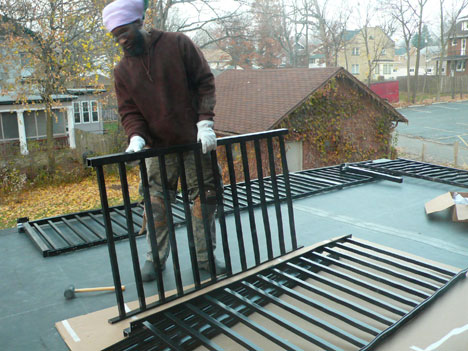 i got a few shots before the sky darkened and a few after the installation was done on this side of the house (he’s working on the other side now). 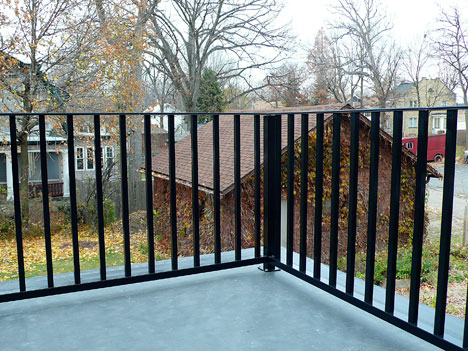 we have railings, finally. 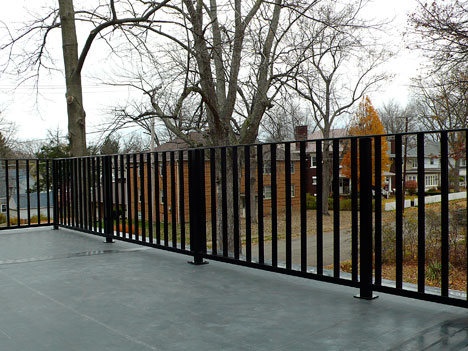 and two smooth, new rubber roofs where there used to be peeling, leaky asphalt. david does great work; this should last us for as long as we’re in the house.

when beckie left, i put away the sweater project and worked on wasp and rose for a while, til it was time to watch TV. 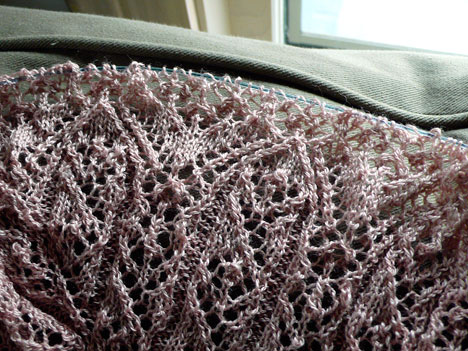 boy, oh boy did i get a lot done over the weekend by NOT spending half my time in the kitchen this week. i mean, i love cooking, but i’ve forgotten what life can be like with saturday and sunday afternoon free. such is the life of a vegetable gardener, at least from june through october.

on saturday, i did my bookkeeping, then went over to knit with debby and susie for the whole afternoon. i worked on the new front for amad’s whitfield shorty and got almost all the way to the underarm. 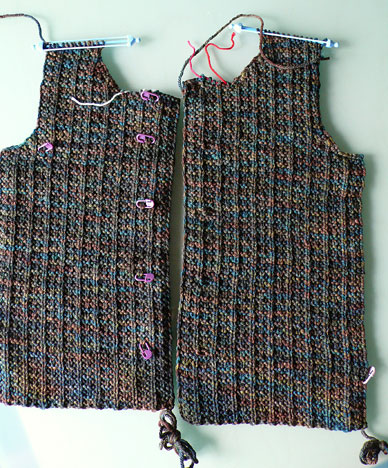 then i finished it up that evening at home. i like the new one way better; it has the same size armhole and neck, but it’s a little longer and a little wider below the armhole. in class yesterday, i ripped back the first one to the underarm and reknit to match the new one. 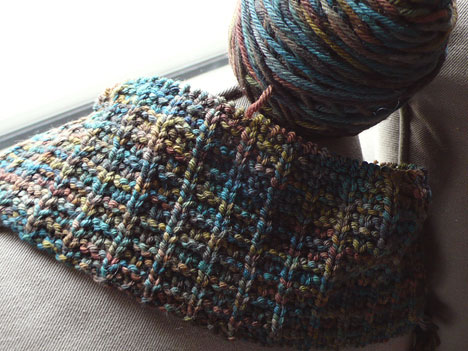 in the meantime, i’ve started the back. if i could finish this up tonight, i’d be thrilled; then i can leave the body pieces at home and just pack the sleeves to knit on my trip. or pack enough to start a mini-shorty for micah, haha. 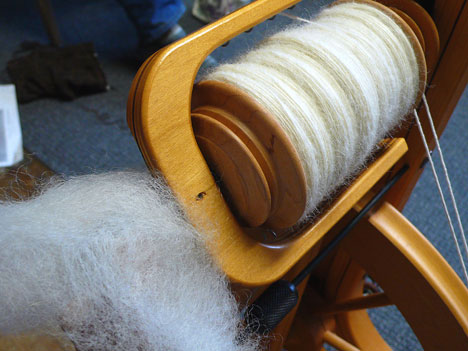 sunday morning our spinning class met to make up for not meeting tomorrow night. i’m still working away on this coopworth/nylon blend—there was a lot more fiber in that bag than it first appeared. i have three bobbins full and a fourth underway; i’m spinning for a three-ply yarn and i fins that a fourth bobbin with the extra singles is always a good thing when it comes time to ply. 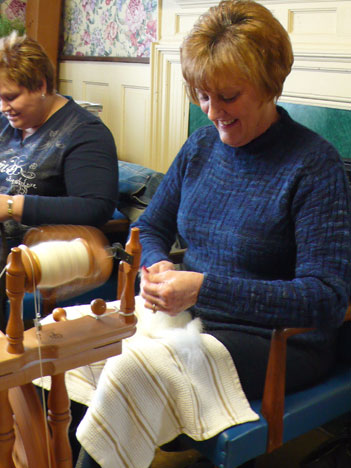 barb showed up in rare form, wearing one of her aztec maze sweaters (barb knits multiples of everything, which is a constant source of envy for susan and linda).

she’s spinning with the same fiber i am; we purchased the fleece at our local wool show last year and had it blended at the mill to spin sock yarn. she proceeded to regale us for the next two hours with stories about what she did all week (a LOT; barb has the energy of a room full of 10-year-olds). one thing she did was refinish her woodwork and paint her bedroom. 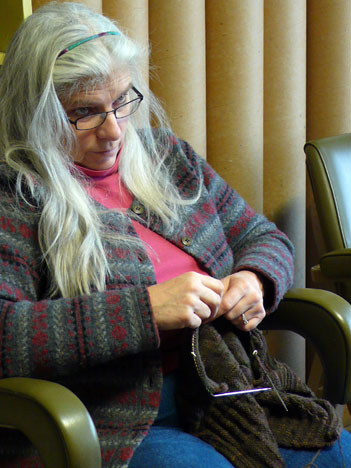 yeah, we know—and that’s not even considering how much knitting she does. susan just looked over her glasses and kept on knitting the back of her ondule . . . which she started last year. barb has put her on a knitting schedule now, so it’s moving along much more quickly. of course, she often knits during spinning class to meet her weekly goals, but we’re ok with that. 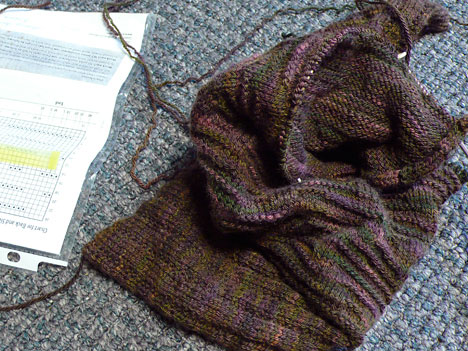 susan is knitting her sweater with a beautiful batch of briar rose grandma’s blessing in plums, browns, and olive, with a touch of rose.

linda is following the same program as susan for getting her ondule done (they started at the same time last fall). she does more of her work at home, so she gets to spin most sundays. 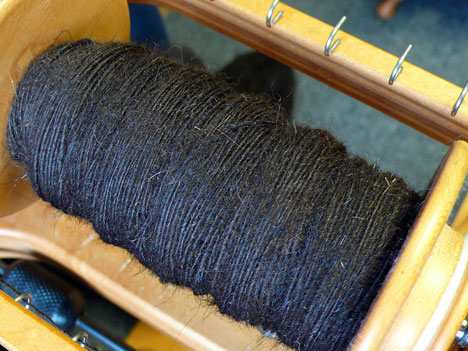 she has a big bag of dark brown alpaca fleece she’s been working her way through. look at what a lovely job she’s making of it; that’s gonna be some nice yarn . . .

after class, i did some blocking—i had the aria delicato scarf to soak and stretch and the crossings mitts needed to be bathed and reshaped. then beckie picked me up and we went shopping for new walk/run shoes (mine are woefully worn out). PLUS, i gave myself a few hours of knitting time and a bike ride. it was heavenly.

but you know what? i’m going to tell you about all that in the next post, because i’ve got a bunch of stuff to get done this afternoon for tomorrow’s trip. i’ll finish up my knitting news in a second post that you can read tomorrow while we make our way to montreal.

11 thoughts on “a weekend worthy of the word”