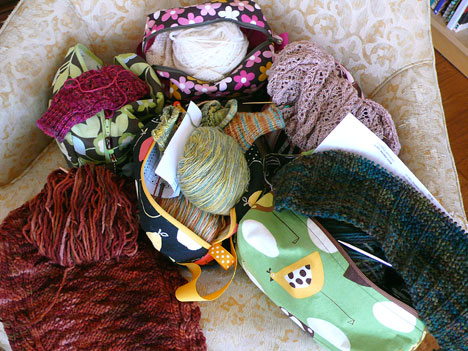 i’m working on quite a few projects at once here—almost too many to keep track of (and yet, i want to start more; what does that say about me?). i’m blaming it on christmas and my annual mad desire to knit lots of useful and amusing accessory items. sometimes, they actually make their way to appropriate recipients . . .

anyway, the fact that i have so many things going and so many that i’m very interested in working on, means that i have a big pile of travel knitting. and i don’t think i’m going to attempt to pare it down—we’ll be away for eight whole days and we’re traveling by car; it won’t matter, will it, if i have to bring two knitting bags??

i’ve got the boy jacket project, the legwarmers i’m knitting for my niece, my own warm cardigan project, wasp and rose, a new scarf-et project (more on that in a bit) a couple of secret projects, and two sock projects that have been languishing in my basket, each one nearly done (what is wrong with me that i’m letting them sit?). 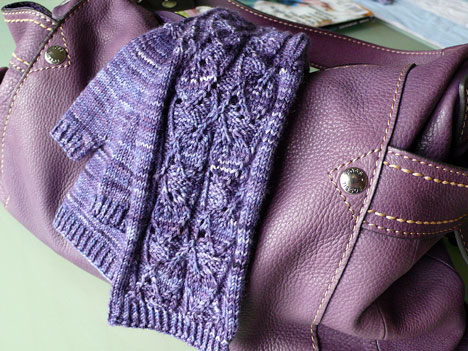 at least i got a couple of things off the needles before i had to decide. the crossings mitts got crossed off my to-do list on saturday; after a bath and reshaping on sunday, the are looking mighty sleek and elegant. 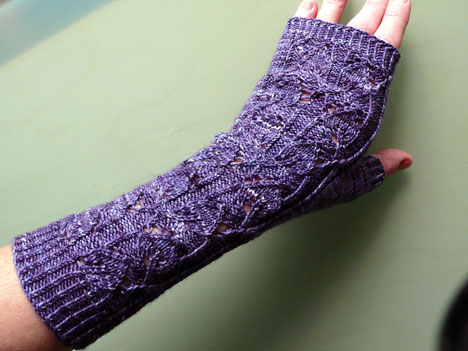 we put them on with a bracelet over the cuff in class yesterday and wow—they’d make a great evening accessory in black or shimmering platinum. 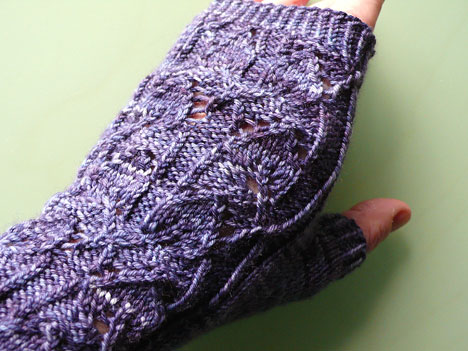 the pattern is written and in proofing; i’ll release it sometime after we return, in december.

the other item that got blocked is aria delicato and it is looking lovely indeed—that nimbus cloud yarn is to die for, both the color and the fiber. 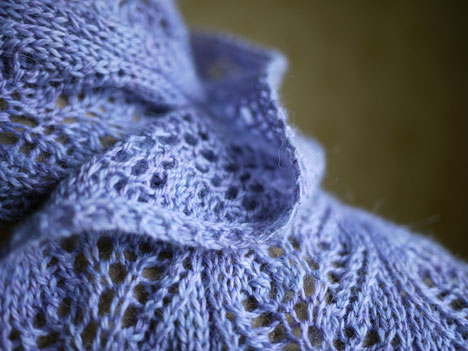 susan is stocking up her store as we speak to get ready for the pattern release on monday . . . she’s especially focusing on this lilac frost color. if you don’t have time to knit the scarf, the yarn and/or pattern would make a luscious gift, even for a non-knitter. 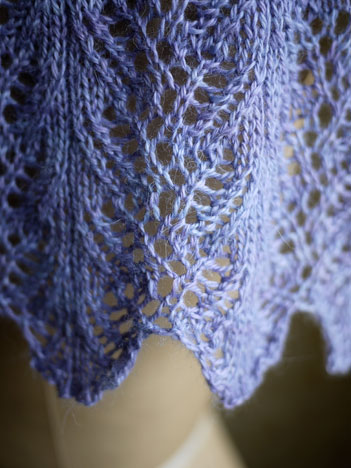 i should pack the leftover yarn and the delicato mitts pattern, too; you never know, i could run out . . .

while i was photographing the scarf on my dress form yesterday, i took some update photos of wasp and rose, because you hardly ever get to see that one in its entirety. 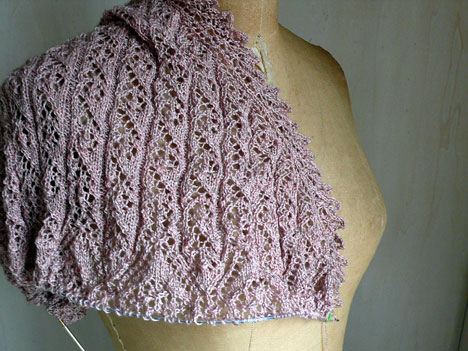 admittedly, between the crumpled lace yarn and the fact that is squished onto the needle, it’s hard to get a sense of how pretty it could be one day. but i’m making progress steadily now and it won’t be long til we can see a lot more of it. the top section is a victorian stripe of winding rosebuds, leading into a large rose trellis pattern with diagonal lines. i’m about one-third of the way through that trellis section 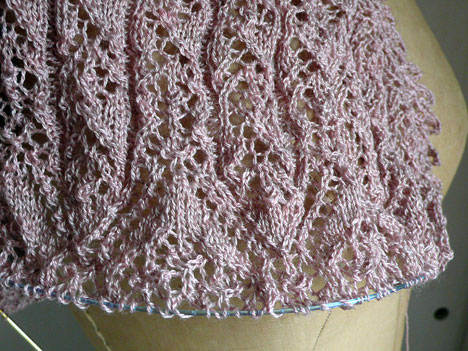 i’m debating about whether to take this on my trip; on the one hand, i am enjoying the knitting and look forward to spending time on it every night (thus making very good progress); i’m on a roll. on the other hand, i rarely pick up this sort of project while traveling, even if i have a whole evening free to work on it—i dunno why (lighting? distraction?). i guess it wouldn’t hurt to throw it in the bag; it won’t take up much space.

i don’t know if i mentioned this, but one of the reasons we are leaving so early for montreal (i don’t have to be there til saturday), is that david and i are celebrating our tenth anniversary on thanksgiving day. i can hardly believe that much time has passed since our wedding! 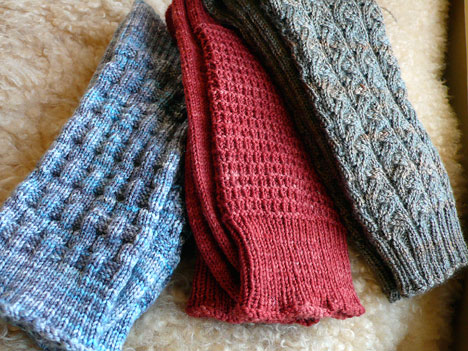 the anniversary socks are packed and tied with a bow to give to david on thursday morning (it’s our tradition; he gets his new winter socks on our anniversary each year. no pun intended, but thanksgiving sorta kicks off the wool sock season in our house.).

i had hoped to have one more pair to add to the pile; something special to mark our first decade. and actually i do have a fourth pair, you just can’t see ’em—they were a secret project. suffice it to say that they are deLISH.

remember when i said i had received back a box of yarn shop samples that had several nice things in it? well, i was rooting through it the other day to sort the contents and found this scarf that i never wrote a pattern for 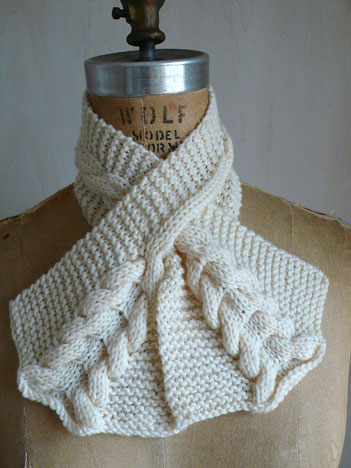 it’s cute right?? you can wear it several ways and it has a very appealing texture. the pass-through opening is a little larger than i would like, but that’s easily fixed. i dunno why i never wrote a pattern—my other criss cross scarves are very popular. but now i’m ready to do it. 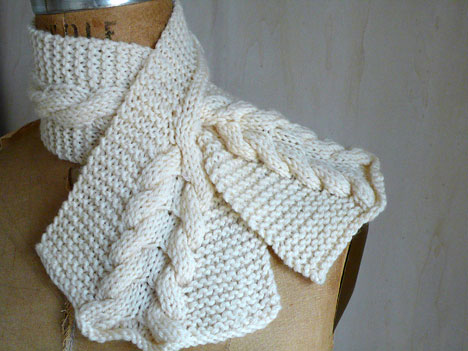 i can’t even remember what yarn i used—obviously something lofty and soft. and i like it just as it is, in cream. after some searching in my stash, i decided on this morehouse merino three-strand worsted in natural soft white 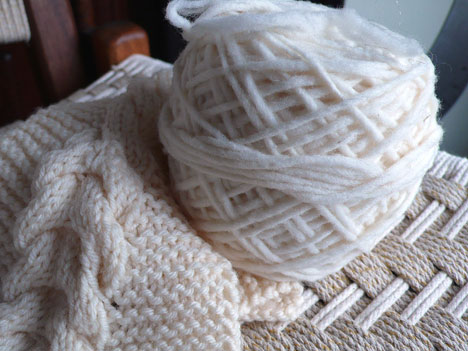 i wound up a skein and put that in my knitting bag. maybe i’ll work that out on my trip; this is the kind of thing i do like to work on in hotel rooms—mindless knitting with a bit of problem solving to do; very entertaining.

this book by sherry ackerman arrived in the mail on tuesday and i decided to pack it along with everything else, so i can browse through and read it at odd moments over the next week. 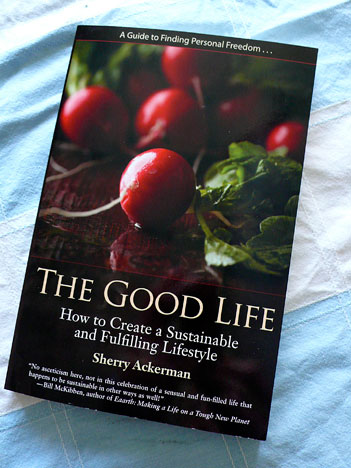 the good life is about living simply and having more satisfaction. anyone who does anything useful with their hands should be able to appreciate the message. in fact, our endeavors often leave us wanting more of that feeling, in more parts of our lives. we might take up growing our own food, or riding a bike for local travel or getting out of the corporate rat-race to sell patterns (haha). i’m curious to find out how others may have experienced such transitions.

ok, i think i’m finally completely caught up with you now—we’ll be honeymooning for the next couple of days, but not out of touch entirely. i’m sure there’s a story or two to tell from montreal.

happy thanksgiving and safe travels, wherever you might be heading to. 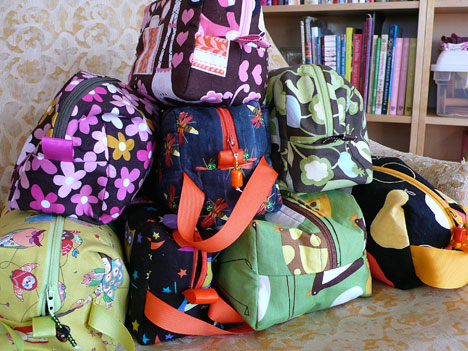