it’s been a bit of a whirlwind here in montreal, but then, it often feels that way wherever i travel. i’m so glad we decided to make a bit of a holiday out of this trip; david and i are enjoying the city with relish. 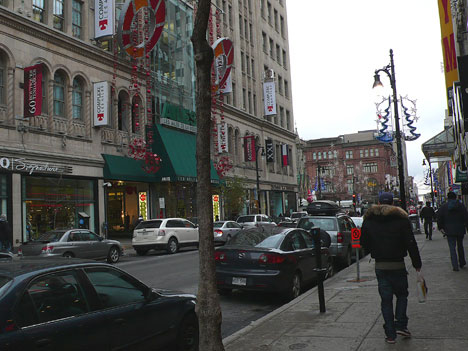 while we love our new home in ohio, there are times that we feel a little nostalgic about our hometown city of new york, and having a holiday in a large city near the water proved to be very satisfying. we get our hit of lights, architecture, culture, and street life while having a bit of time away from work. 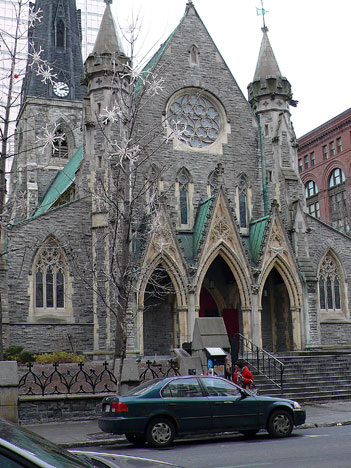 we arrived wednesday night after a beautiful day of driving, having crossed over the border and the st. lawrence river at 1,000 islands, which i’d never seen before (it’s beautiful; if you ever get a chance to go, you should).

we grabbed a quick, romantic dinner at a little bar restaurant near our hotel (we’re staying out in the suburbs) that proved to be excellent—deliciously crisp, light pizzas, hot from the oven and topped with yummy stuff. 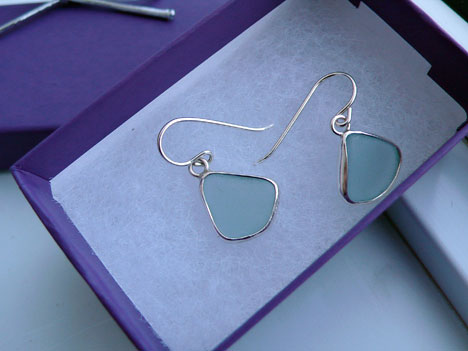 for our anniversary, david presented me with a beautiful pair of glass earrings to match the bracelet i wear all the time, a gift he procured in secret from a shop in la jolla with the help of my friend kim (isn’t she the best friend?).

little did we suspect the adventures these earrings would take us on over the next couple of days . . . 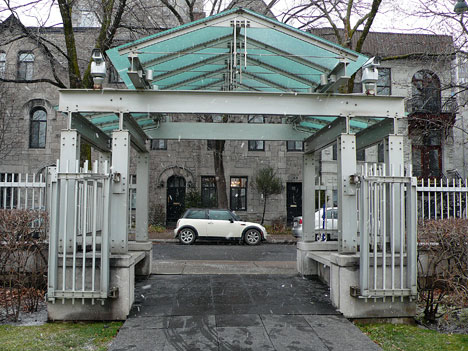 on thursday we slept in for a while (a total luxury for me), then headed into the city for the afternoon and evening. first, we visited the centre canadien d’architecture, where we saw an excellent exhibit the effects of migration on the way we arrange our living environments. they also have a mind-blowing bookstore.

after that it was time for coffee and we stopped off at a steamy boulangerie/cafe to warm up. david tries the pain au chocolat wherever he goes and pronounced the one he had here to be very good (good enough to ensure another trip the next day, haha).

then we were off for more walking. we stopped by the musée des beaux-arts de montréal, but as it was late, we decided not to go in, even though the otto dix exhibit looked enticing. instead we headed to dinner—we were both famished by this time.

when i got myself unwrapped from coat, scarf, and hat, david noticed that one of my new earrings was missing, ACK! i hadn’t even had them on for a whole day—i was heartbroken and upset; it isn’t often that i lose something like that. arrghh.

the stupidest part? i was telling david over dinner about those handy rubber stoppers you can buy to keep earrings in place and that i should get some; when we got back to the hotel later on, i realized that the jeweler had actually included them in the box and i just hadn’t seen them. grrr.

i fretted about that earring all night, and in the morning i insisted that we try to find it, even though i knew i was sending us on a wild goose chase. i mean really, who could expect to find one little earring in a big city? i promised myself i wouldn’t let it get in the way of another nice day and off we went.

i wasn’t going to check at the architectural center because it was out of the way and i was pretty sure i had it after we’d been there. but then realized i’d be kicking myself afterward if we didn’t go. we scanned the sidewalk all the way there and saw nothing. we checked at the coat desk and the nice woman there said she didn’t have it, but she’d check with security. a quiet conversation in french with a few “no’s” ensued and my heart sank.

next thing we knew, the security guard came out and asked if the earring was a glass and silver triangle. i said yes! did he have it?
“no”, he said; he saw it, but he didn’t have it.
he’d found it right outside the front gate on the sidewalk and knowing he wouldn’t be able to find the owner, he set it on the stone bench near the entrance.

we ran outside to look 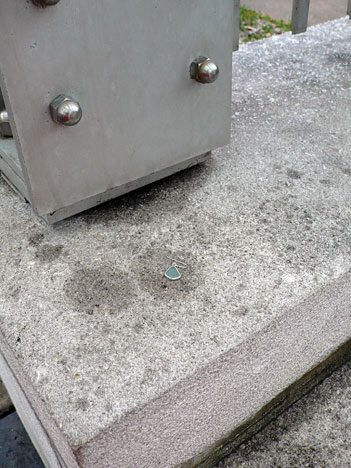 it was still there! i could hardly believe it. 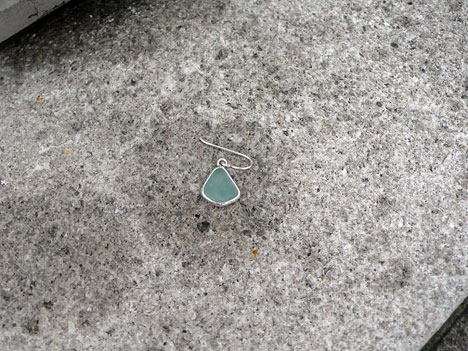 am i a lucky ducky or WHAT??
i ran back in to thank the man profusely and tell him a babbling story about it being an anniversary gift, etc. i was so overcome with gratefulness that i forgot to take his picture for the blog.
he seemed very pleased to see the whole thing come together so well.

i’m still pinching myself that it worked as it did—phew. 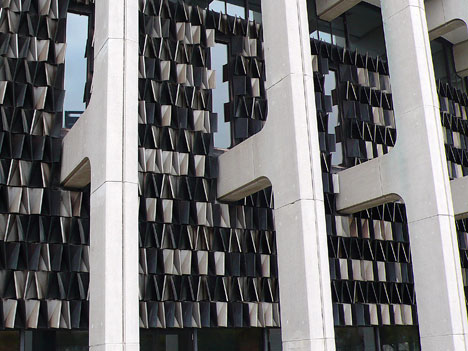 we spent the rest of the day walking to the in the place des artes, where we enjoyed the architectural scenery and visited the musée d’art contemporain de montréal 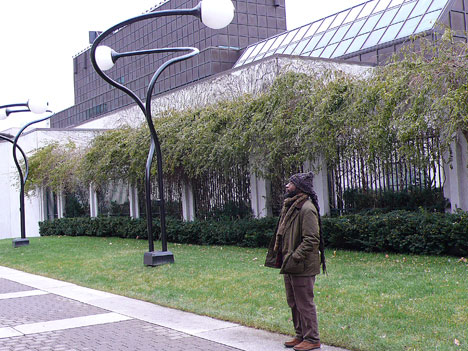 we saw an installation by jon pylypchuk and an exhibit of work by the winners of the sobey art awards for 2010. 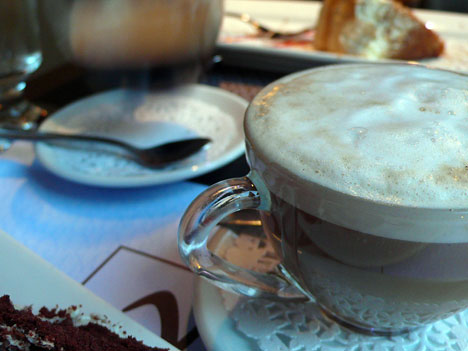 the weather was pretty raw on friday, so afterward we cozied up to some hot coffee and cake at M cafe and marveled once again over finding that darn earring (i still can’t believe our luck, haha). 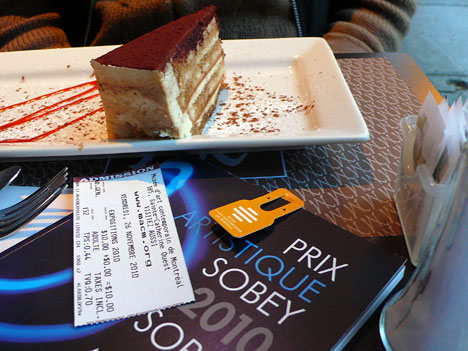 then it was time to wend our way back to our hotel—we had a date with the delightful veronik avery for dinner at her home with robin melanson. i was excited to meet them, as i am an admirer of both their work. 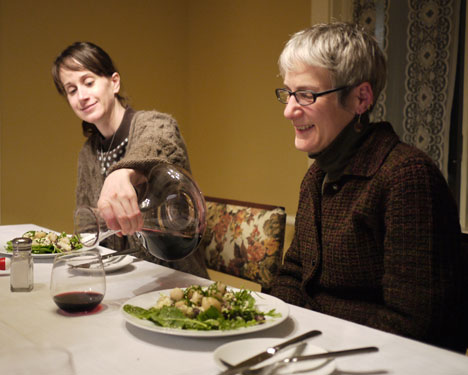 it was a wonderful evening, full of good talk and getting to know each other—designers tend to be very happy to stay at home, working in solitude, but we do very much enjoy the odd night out with our kind to talk shop, talk books, talk music, etc., preferably over great food and wine. 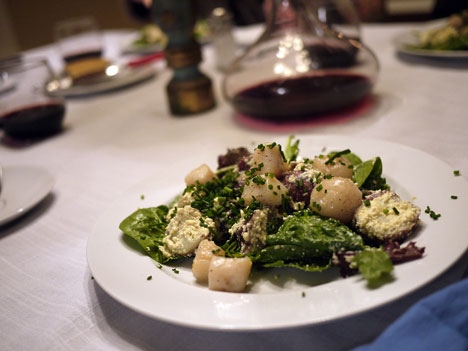 which we did—veronik prepared a memorable meal that included homemade ravioli, which was so good, i can still smell and taste it, mmm. this was followed by another extraordinary dish of scallops, potatoes, and greens, and a dessert pudding that is a local specialty.

i could have talked with them into the wee hours, but i had to get up the next day to teach, so we left regretfully at a decent hour. i hope i get to see them both again soon . . . 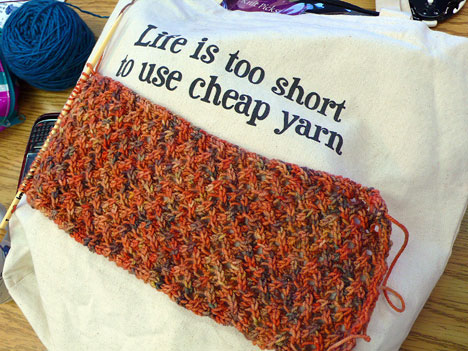 yesterday and today were devoted to classes with the montreal knitting guild, where i was invited to teach a day of lace classes and a day of sweater fitness.

while friday had been rainy and sleety, we woke saturday to covering of snow, with more falling as we drove to class. 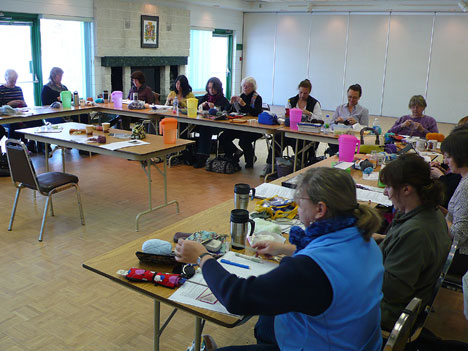 we had full classes on both days—there’s nothing like enthusiastic knitters who want to know more. 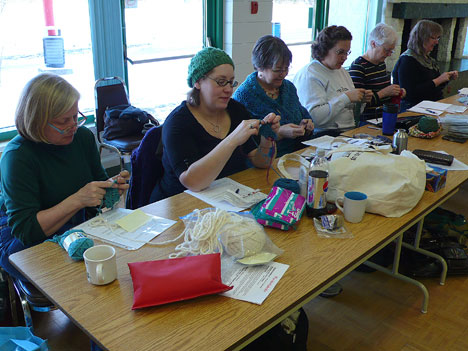 we were grateful though, when one special member of the class kept completely quiet on saturday 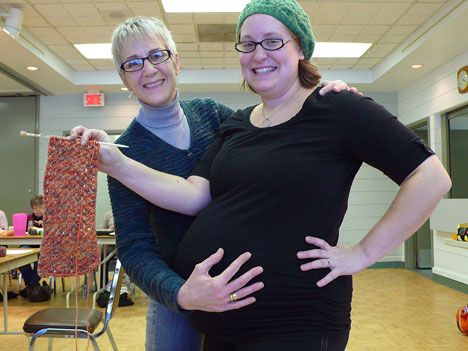 robyn is 36 weeks pregnant, but the baby was willing to wait at least one more day to appear. not that it wouldn’t have been exciting, or a good story to bring on a birth during class . . . but maybe not this weekend, heh.

robyn has a la novia scarf on the go, packed and ready to take to the hospital. a good choice—it’s an easy knit, but entertaining; she could run out the door in a hurry, leaving the pattern behind, and still have everything she needs to keep going on it. it’s keeping her company while she waits for the big day.

on saturday afternoon we did a bittersweet vines project class that proved a nice followup to the lace skills class that morning.

while no one managed to finish their neckwarmer in class, most participants got pretty far along and several finished pieces showed up at today’s sweater class. 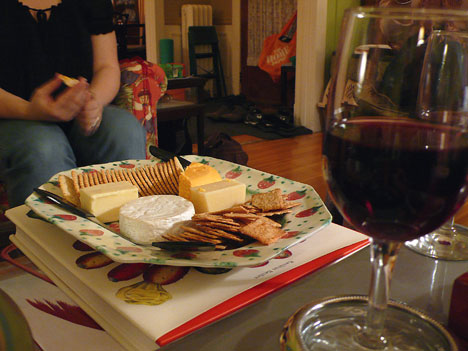 after classes yesterday, a small group gathered at barbieO’s incredible home for a potluck dinner. 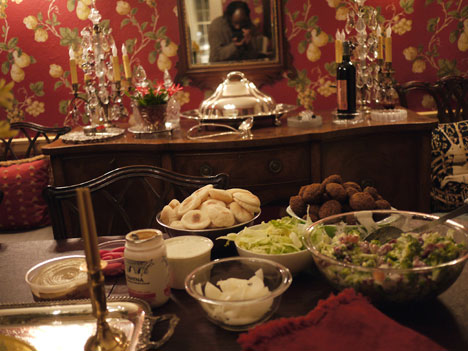 where we lounged, ate, and knitted the evening away. having gotten an early start, a lot of knitting was accomplished during this evening. 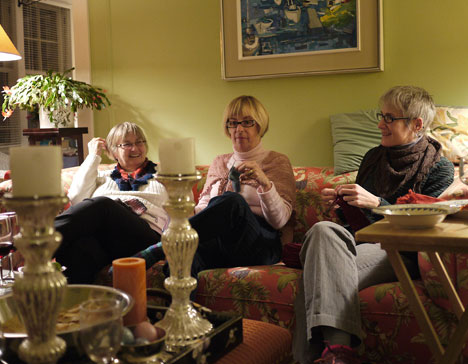 and a lot of fun was had—even david was rather animated throughout the evening, which leads me to believe that i should bring him along more often. 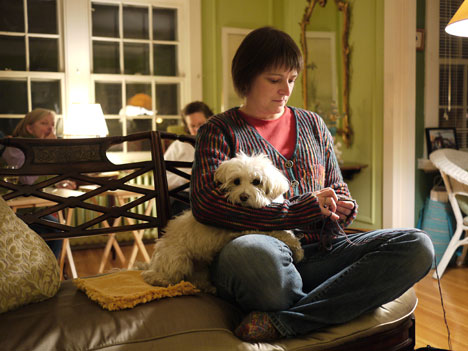 (how cute is this dog?? get this—it’s a kind of dog that is bred to love; it’s job is to cuddle and keep people from feeling bad. and just when i thought i’d heard everything . . .)

i’ve been knitting too, though not as much as i thought i would (we’re never home!). last night at barb’s, i worked on finishing up a legwarmer. i’m almost done with the back of the boy sweater 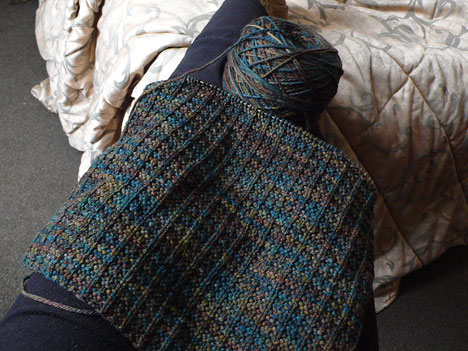 which i’m pretty sure i can finish up tonight. and i worked quite a bit on a secret project, during the drive from ohio. other than that, we’ve been on the go an awful lot so knitting time has been sparse, save for a bit of sock knitting on the bus and train around montreal.

tomorrow, we take off again for albany, where we’ll visit with my mom for a couple of days before heading back home. maybe there i’ll get some knitting done.