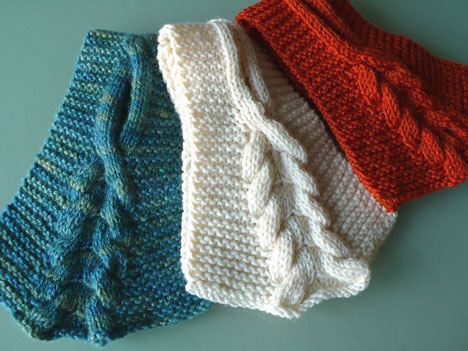 i’m a big fan of potato chips (or crisps, if you like)—a good-looking pile of chips makes me weak in the knees. i can’t scarf down a whole bag or anything, but i find a small bowlful now and again (ok, several times a week, if you must know) to be a very satisfying snack, indeed.

same thing with certain knitting projects—there are some that are best ingested in quantity, because they are so quick, fun, and delicious that one is just not enough.

the cabled keyhole scarf is turning out to be one of those. i knit up another one in briar rose cashmere special the other night while watching TV; it happened so fast i surprised myself. when i cast on at 11:30 pm, i thought, “i’ll just get this on the needles and knit a few rows, then it’ll be here tomorrow”. 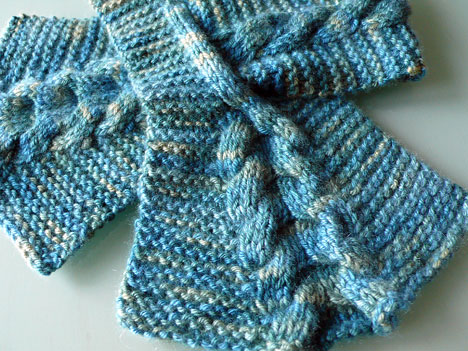 but the combination of luscious cashmere and gratifying texture knitting (on size 7 needles) sucked me in big-time. next thing i knew, the keyhole shaping was done and i was barreling along the neckstrap, less than an hour into the project. at 2:00, i was shaping the opposing flared section and by 2:30, i was weaving in the ends. not bad.

and it probably would have gone even faster if i didn’t stop so often to admire the yarn (isn’t christmas great? we get all the pleasure of knitting with wonderful, special yarns AND a gift to give at the end. sigh.).

there’s just one problem—i’m not done loving this project. and there are so many yarns that are just right for it—i want to try them all. i want one in tweed now, and found just the thing in my stash, a gift that was included in a goodie bag from one of my teaching dates 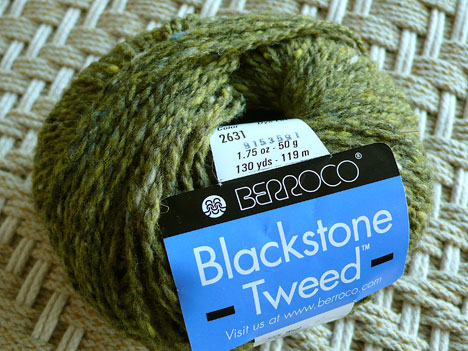 here’s the thing—you know those little balls of DK that have 120-130 yards, which is not enough for a regular scarf or a hat or even a pair of mitts?? basically, there is almost nothing i can do with one of those EXCEPT to knit a scarf like this—they are perrrrrfect for it.

yay.
and it hardly needs blocking; just soak, squeeze, and lay flat to dry (or better yet, just wrap and go, haha). 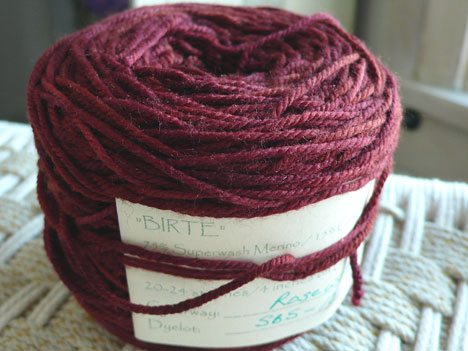 that’s what barb is doing—she’s testing the scarf in a few different yarns, but one of them is great northern yarns cashmere sport/DK in black, with which she’s already knit a pair of fine cabled mitts (i saw them sunday, but forgot to take a photo; they are wonderful).

hmmm, i have some of that GNY cashmere in gray and heathered plum . . .

the pattern is written and almost through proofing; i’m thinking that we will release it on monday or tuesday.

i’m trying not to allow my other knitting to suffer; i’m working on scarves as one of my TV time projects, so as not to get behind on other christmas knitting. i did, however, spend most of last evening at my desk, so not much other knitting got done. must buckle down from here on.

pieces of boy jackets are piling up all over the sofa in my study as i get closer and closer to having two of them finished. i decided i should knit ALL the pieces i need first, to make sure my yarn supply was sufficient. then i’ll block and seam them both. and if i have leftovers, i’ll add pockets 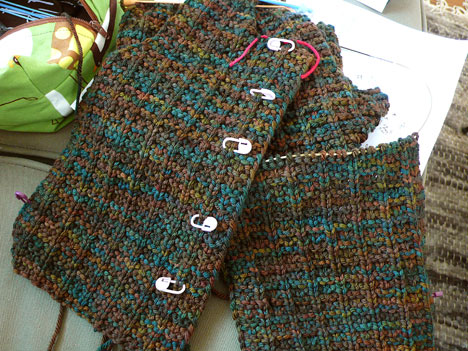 i started the baby version the other night and knit the back and most of one front that night. the second front is on the needles. i should be able to finish that and knit at least one sleeve tonight. i think i’m going to squeak by with the yarn i have, phew.

once they are done and seamed, i’ll do a photo shoot with debby’s grandsons before sending them off to the boys. then i’ll write up the pattern and get that into production.

in between all that i knit robin’s hat, which proved to be quick diversion project; nothing like a bright, yummy yarn to make a hat knit up fast 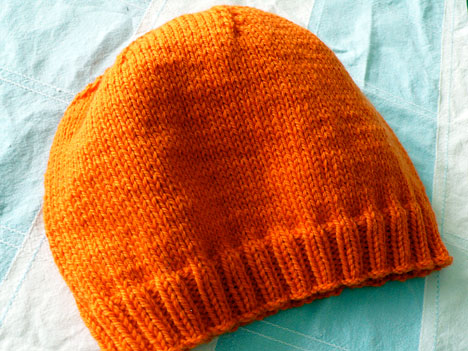 he says it fits perfectly. i didn’t take a picture of it on him in it, but had a little fun while we waited for him to pick it up. 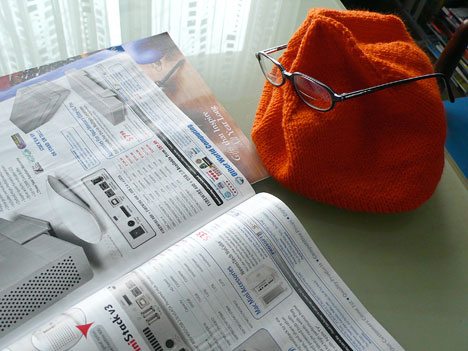 hats are surprisingly difficult to entertain . . . all that pent-up energy and no legs to dance with. 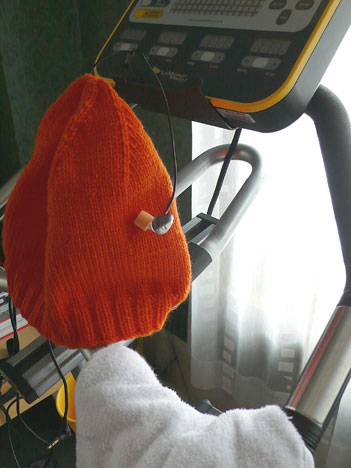 actually, debby is keeping me pretty busy these days—in addition to knitting her husband’s hat, i’m filling a request for a pattern for kid-sized fingerless mitts (but only because i think it’s a great idea, too).

apparently, there aren’t many choices out there (i’m taking her word for that), in mitts that will fit ages 2-8 years. so, with very complete measurements taken from all of her local grandchildren, i spent yesterday writing up a pattern in five sizes that also provides a few choices for optional textural detail. last night i knit up a protoype in the smallest size while i watched TV, using briar rose fourth of july left over from my jackie jacket. 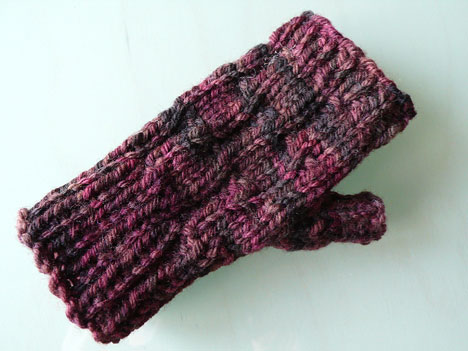 awwww—how cute is that??
do i feel another potato chip project coming on??
let’s add my hand for scale . . . 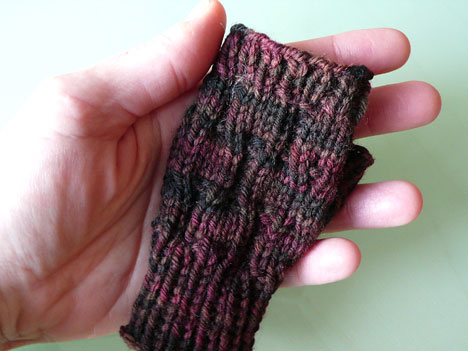 i don’t have kids around to try them on, but i can tell from hand holding experience that it’s about right. i did misjudge the thumb though—this first one is too small (when i knit thumbs, i tend to pull my yarn too tightly, ack). i reworked the pattern this morning and sent it to debby to start test knitting. 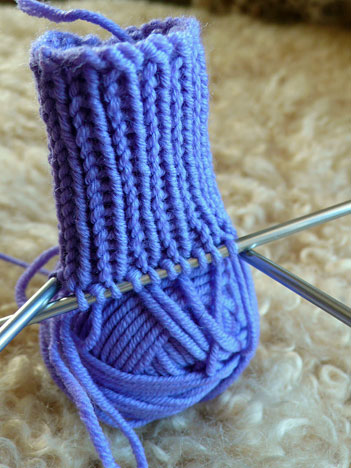 before i went to bed this morning, i started another in the medium size, this time in some leftover filatura di crosa zara DK. maybe we’ll even get some modeling shots this weekend with the kids. we should have the pattern ready very soon.

in the meantime, i can think of a few little texans in my own family who might want some of these hand warmers . . .

oooh, and speaking of spirit trail fiberworks, jennifer emailed today to let me know that she is restocking her nona lace yarn in 48 colors as we speak. above we have grizzly and below 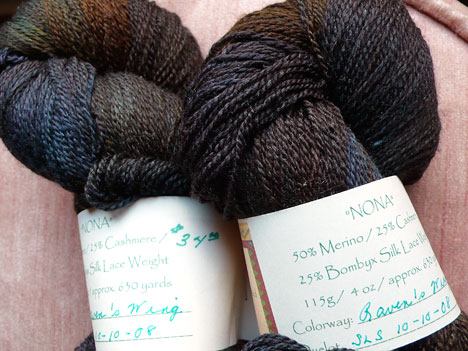 we have raven’s wing. this lovely merino/cashmere/silk blend is the sibling of sunna and birte, with the luxury content pumped up a bit. the first batch of this yarn literally evaporated from her booth at rhinebeck, but not before i got some . . . here’s my favorite, the one i requested in advance 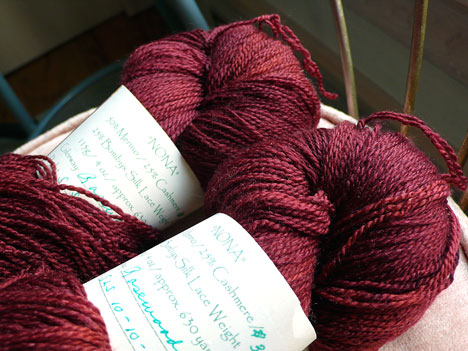 rosewood (same as the birte i showed above; sometimes i’m consistent). this is a slightly heavier lace yarn which is a favorite weight for me—you still get a delicate lace feel and drape, but it’s got more depth. it’s easier to see and handle, without being heavy. and did i mention luxurious?? oh yeah.

and i don’t know if i can adequately describe in words just how soft and lovely it feels; i can’t wait to work with it. clara gave it a nice paragraph in knitters review today, too, so you know i’m not kidding.

i’ll be playing with it once holiday knitting is done; i know just what i want to do (and here’s hoping it works!). if i could get that project on the needles before i travel in january, that would be awesome.

ok, i think i’m about tapped out for news, you guys; that’s all i’ve got. well, i think i might have a nap in me now, but probably not blog fodder, eh?
thursday is the best day of all for a nap, i think . . .